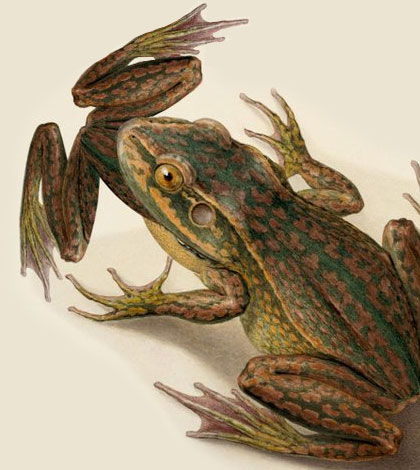 Explore the natural history of cannibalism in nature and throughout history in this fascinating and macabre new book by Bill Schutt. 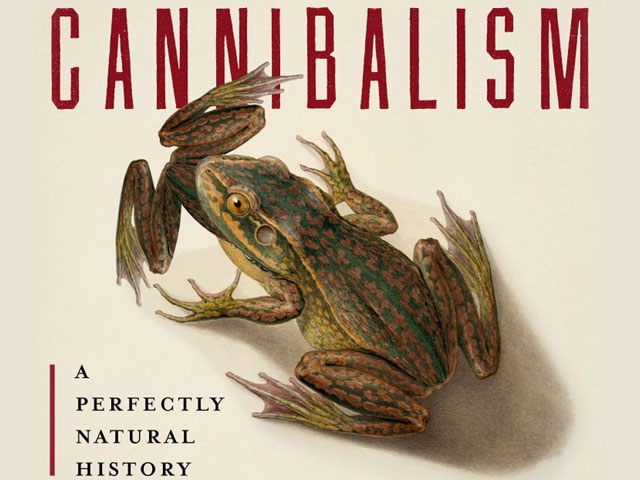 In his new book, author Bill Schutt explores some of the most bizarre examples of cannibalism throughout nature and history, ranging from the infamous Donner Party to spiders who feed themselves to their young. Cannibalism: A Perfectly Natural History bites into topics like sexual cannibalism, kuru and Mad Cow Disease, cannibalism in the Bible, mummy powder for medicinal purposes, and the consumption of human placenta.

For centuries scientists have written off cannibalism as a bizarre phenomenon with little biological significance. Its presence in nature was dismissed as a desperate response to starvation or other life-threatening circumstances, and few spent time studying it. A taboo subject in our culture, the behavior was portrayed mostly through horror movies or tabloids sensationalizing the crimes of real-life flesh-eaters. But the true nature of cannibalism–the role it plays in evolution as well as human history–is even more intriguing (and more normal) than the misconceptions we’ve come to accept as fact.

Bringing together the latest cutting-edge science, Schutt answers questions such as why some amphibians consume their mother’s skin; why certain insects bite the heads off their partners after sex; why, up until the end of the twentieth century, Europeans regularly ate human body parts as medical curatives; and how cannibalism might be linked to the extinction of the Neanderthals. He takes us into the future as well, investigating whether, as climate change causes famine, disease, and overcrowding, we may see more outbreaks of cannibalism in many more species–including our own.

Cannibalism places a perfectly natural occurrence into a vital new context and invites us to explore why it both enthralls and repels us. 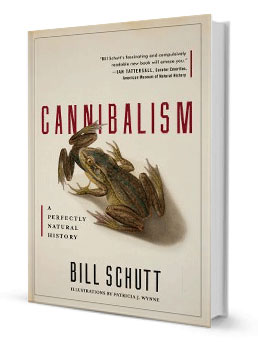 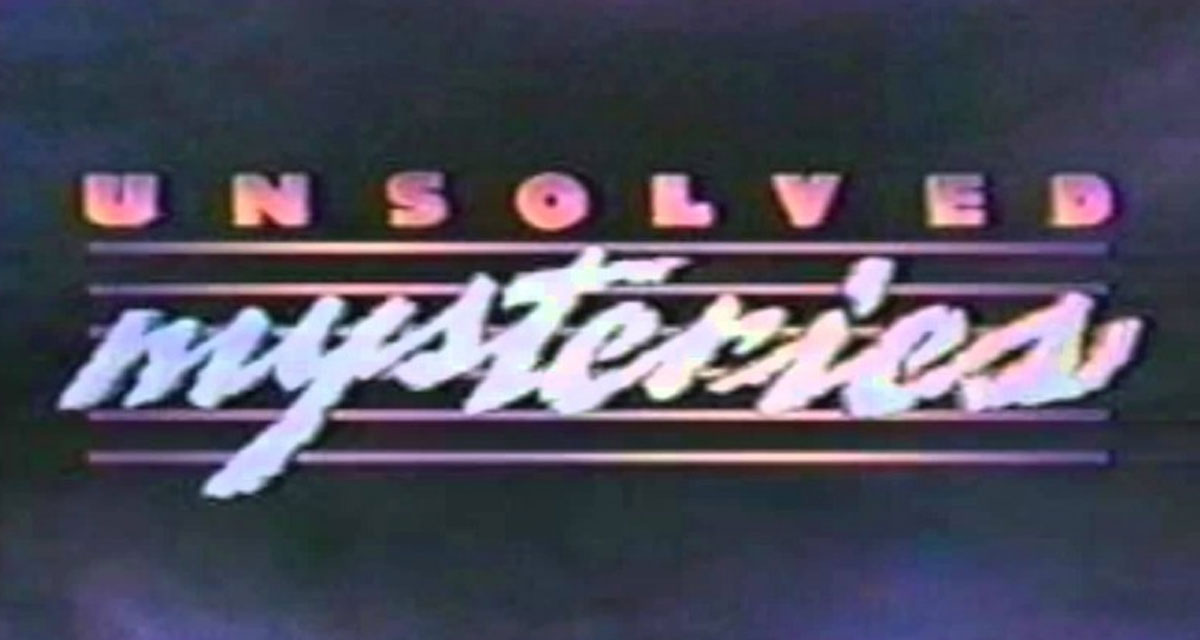 Thanks to Amazon streaming, Unsolved Mysteries is still fascinating and chilling 30 years later. 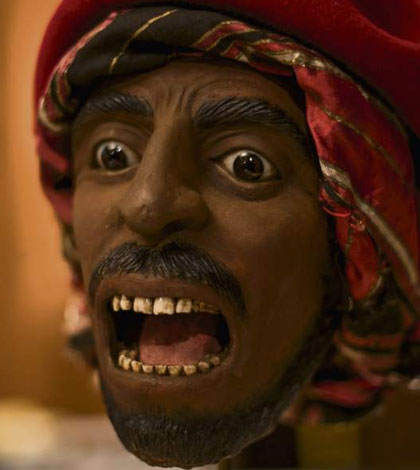 Restoration of a 150-year-old taxidermy diorama revealed it contains real bones, including an unidentified human skull. 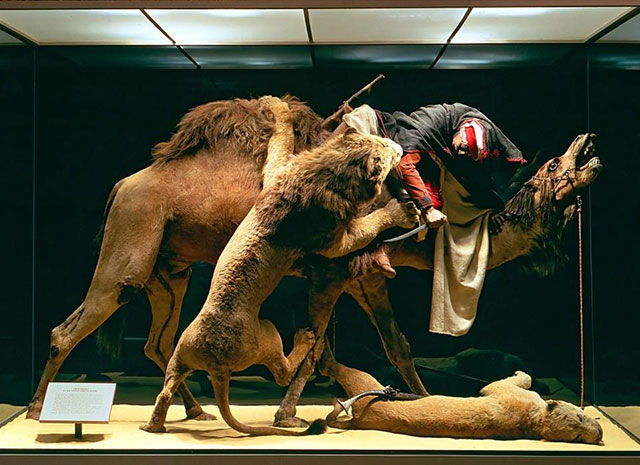 The Carnegie Museum of Natural History in Pittsburgh always knew their most famous diorama, the “Arab Courier Attacked by Lions,” had real human teeth. The scene, which depicts a man riding a camel being attacked by two now-extinct Barbary lions, was created in 1867 by brothers Édouard and Jules Verreaux of the Paris-based Maison Verreaux company. In those early days of taxidermy, the bones of skulls of animal specimens were often used in the mount, as is evident in the lions and camel of Carnegie’s diorama, so the use of real teeth in a human mannequin isn’t very surprising.

Despite a persistent urban legend that the courier contained more actual human remains, the museum had no reason to suspect such claims. They hoped a CT scan during the restoration process would finally dispel the rumors.

But that wasn’t the case. The scan revealed the courier’s face was sculpted upon a real, complete human skull. Ethical questions were immediately raised about repatriating the remains for burial, but no identifying records have been found.

This isn’t the first time the work of the Verreaux brothers has been the subject of such macabre controversy. Another one of their specimens was reburied in October of 2000. 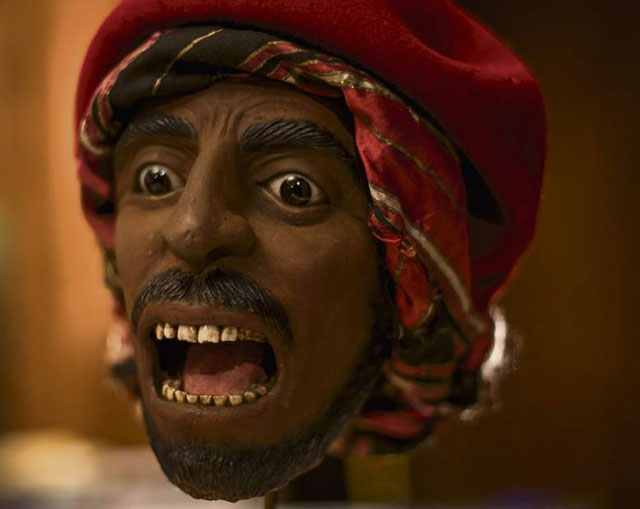 Face sculpted on a real human skull in 1867

Established in 1803, Maison Verreaux was the earliest known supplier of natural history objects, leading expeditions around the world to collect specimens and sell them to various museums and institutions. In 1831, while traveling through Africa in what is now Botswana, Jules witnessed the burial of a Tswana warrior. He returned later that night to dig up the grave, taking the skin, skull, and a few other bones from the fresh remains. He mounted the skin and bones on a wire spine, used wooden boards for the shoulder blades, and then stuffed it with newspaper before shipping it back to France with a load of animal mounts.

Complete with raffia, spear, and shield, the warrior was on display in Paris for some time before ending up at the Barcelona world exhibition in 1888. Later he became part of a collection in the Banyoles museum, where he was displayed in a glass case and was known only as El Negro. He remained there until finally being removed in 1997.

Three years later Spain agreed to return the remains to Botswana. The warrior was sent to Madrid to be dismantled. They removed the glass eyes and other non-human additions. The skin, they discovered, had been treated with shoe polish at some point, causing it to crumble. Because of this, only the skull and other bones were returned to Africa for reburial. 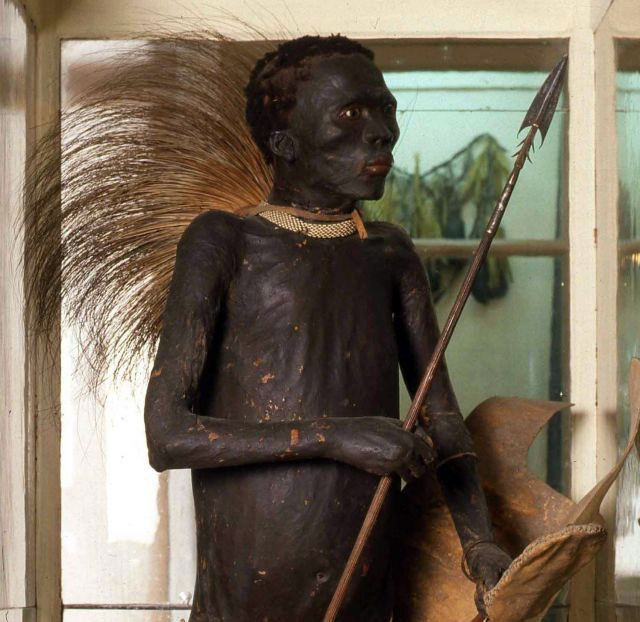 El Negro on display in a museum in Banyoles

Tracing the skull inside the Carnegie’s camel rider to a specific origin has been deemed highly unlikely, so it may never find its way home. The diorama will be on display in a new, more prominent position, with a new name: “Lion Attacking a Dromedary.”

The cost of spending the afterlife on top of Hollywood’s most iconic “blonde bombshell,” Hugh Hefner’s eternity, and other strange stories from Marilyn Monroe’s grave. 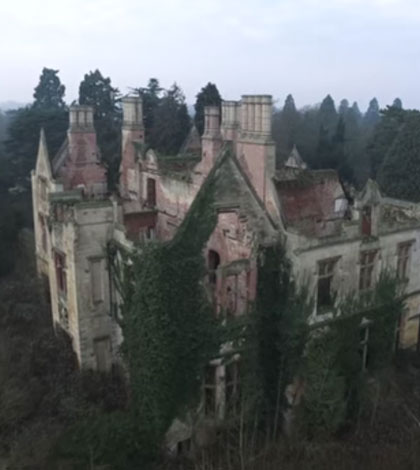 Fly over the historic ruins of Lincolnshire’s Nocton Hall in this incredible drone video.


Before it was gutted by fire in 2004, the historic Nocton Hall was home to ghosts. It was originally built around 1530 during the reign of Henry VIII, whose fifth wife Catherine is said to have planted the chestnut tree on the property that still stands today. It was home to several prominent residents throughout the years, and served as a hospital for soldiers for much of the last century.

Over the years, members of the hospital staff have claimed to see the apparitions of various patients, a ‘Grey Lady,’ and a crying girl.

From Haunted History of Lincolnshire:

The ghost of a young girl was said to roam the halls and particularly enjoy haunting one bedroom within the building. Several staff who stayed in the room were awakened on separate occasions at exactly four thirty in the morning to find a young girl standing at the end of the bed. She was sobbing and speaking incoherently about a ‘devilish man’ who had ‘done this to her’. It is believed that this was the ghost of a young servant girl who lived in the house and was tragically murdered by the owner’s son after he had his way with her but then found out that she had become pregnant. This was obviously an inconvenience to the young master so he disposed of her.

Get a good look at what remains of Nocton Hall in this drone footage above by Theo Southee.