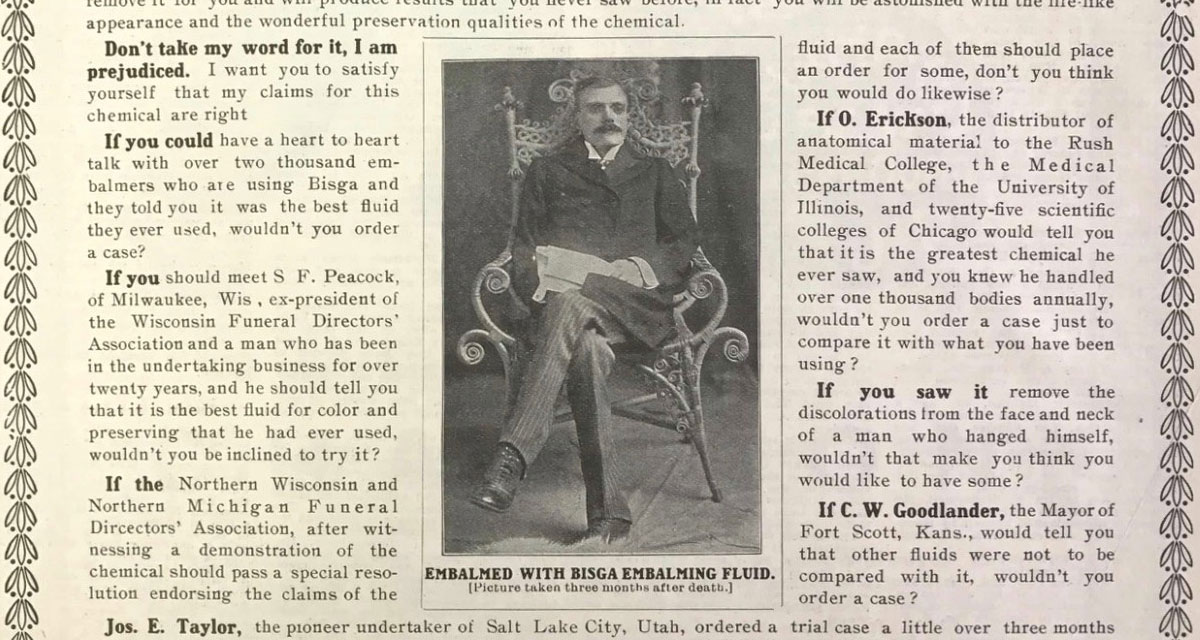 This vintage ad for Bigsa embalming fluid includes a photo of a man dead for three months to demonstrate it’s effectiveness. 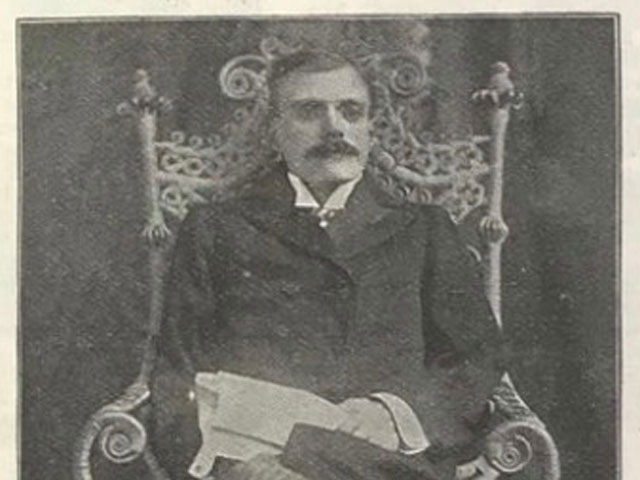 The Sunnyside was a funeral trade magazine that got it’s start in the mid-to-late 1800s. It merged with a competitor magazine called The Casket in 1932 to become Casket and Sunnyside, which ran until 1988. The magazines, though rare to find these days, are known for the quirky and often macabre advertisements for hearses, coffins, embalming fluid, clothes, and cosmetics that graced their pages.

This one in particular is from the January 1903 issue of The Sunnyside. It is a letter from Dr. Carl Barnes, creator of Bisga embalming fluid. To bolster it’s claims, the ad includes a photo of a finely dressed gentleman who has been dead for three months. 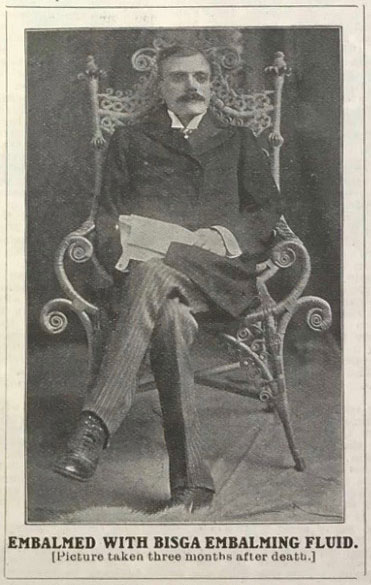 I want to say a few words to the American Funeral Directors and Embalmers:

Six months ago I made a few gallons of Bisga Embalming Fluid. I succeeded in doing this after about three years patient work in the laboratory. I used to think it was necessary to remove the blood in order to preserve the body. I was finally able to produce a chemical which would not only remove discolorations if present, but would combine with the dark discolored blood and restore it to its natural color, thus removing every vestage of discoloration and thus give to the body a perfectly life-like appearance.

When I first took up this study, there were hundreds of embalming fluids on the market and the manufacturers of them, without exception, said to remove the blood. They were right. I would advise every embalmer today to remove the blood, if he is using any other preparation except Bisga. If you have Bisga do not remove the blood under any circumstances as Bisga will remove it for you and will produce results that you never saw before, in fact you will be astonished with the life-like appearance and the wonderful preservation qualities of the chemical.

Don’t take my word for it, I am prejudiced. I want you to satisfy yourself that my claims for this chemical are right.

If you could have a heart to heart talk with over two thousand embalmers who are using Bisga and they told you it was the best fluid they ever used, wouldn’t you order a case?

If you should meet S F. Peacock of Milwaukee, Wis., ex-president of the Wisconsin Funeral Directors Association and a man who has been in the undertaking business for over twenty years and he should tell you that it is the best fluid for color and preserving that he had ever used, wouldn’t you be inclined to try it?

If the Northern Wisconsin and Northern Michigan Funeral Directors’ Association, after witnessing a demonstration of the chemical should pass a special resolution endorsing the claims of the fluid and each of them should place an order for some, don’t you think you would do likewise?

If O. Erickson, the distributor of anatomical material to the Rush Medical College, the Medical Department of the University of Illinois, and the twenty-five scientific colleges of Chicago would tell you that it is the greatest chemical he ever saw, and you knew he handled over one thousand bodies annually, wouldn’t you order a case just to compare it with what you have been using?

If you saw it remove the discoloration from the face and neck of a man who hanged himself, wouldn’t that make you think you would like to have some?

If C.W. Goodlander, the Mayor of Fort Scott, Kans., would tell you that other fluids were not to be compared with it, wouldn’t you order a case?

Jos. E. Taylor, the pioneer undertaker of Salt Lake City, Utah, order a trial case a little over three months ago, ten days later he telegraphed for fifty gallons and has since ordered fifty more. Mr. Taylor has been in business for fifty years and knows something about embalming fluids too!

Undertaker O’Brien, of Cascade, Ia., says that Bisga is his best advertisement.

If the United States Chemical Co., should offer to send you a six-gallon case with the guarantee that every gallon would give satisfaction for money refunded and pay freight both ways, wouldn’t you take the time to sit right down and order a case? All right; we will do it, so order. Right now, not to-morrow; “to-morrow” ruined Napoleon. One minute, a pen full of ink and a postal card may be the means of building you a reputation, and ultimately be the means of making you thousands of dollars. We have the Bisga, you have the postal. 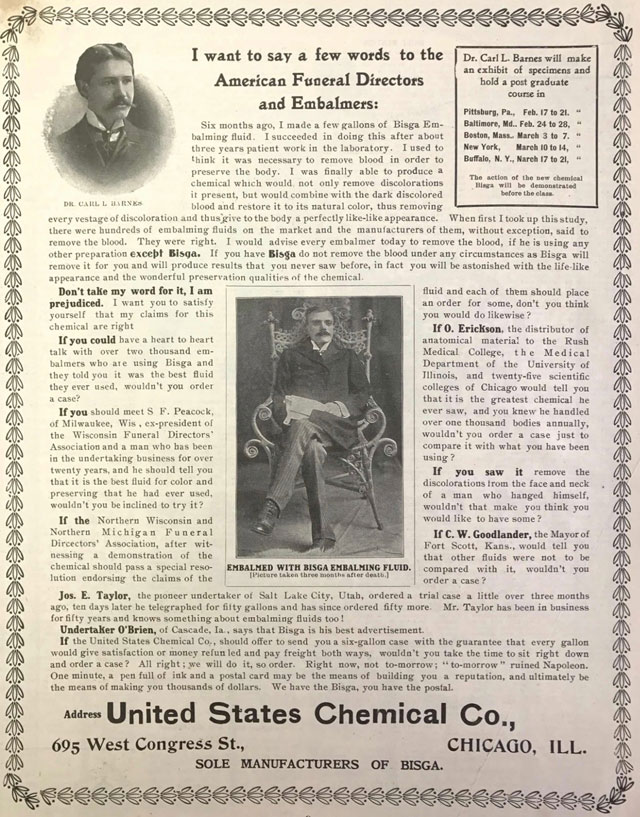 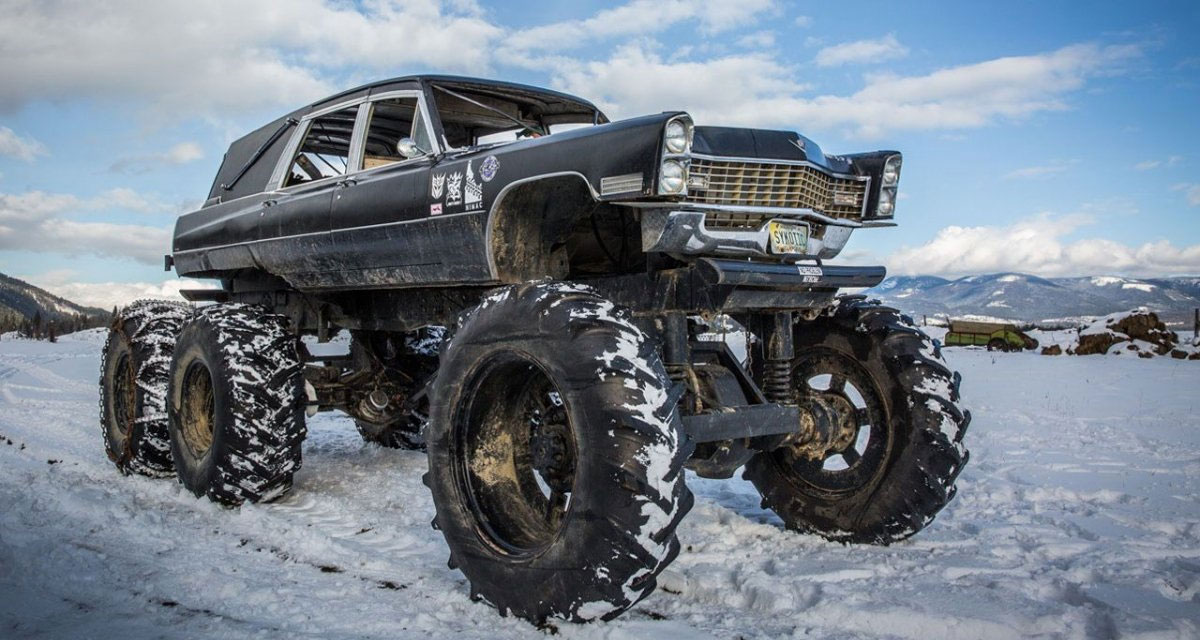 This repurposed hearse may not haul bodies anymore, but it does haul ass through bogs of mud on monster 60-inch tires. 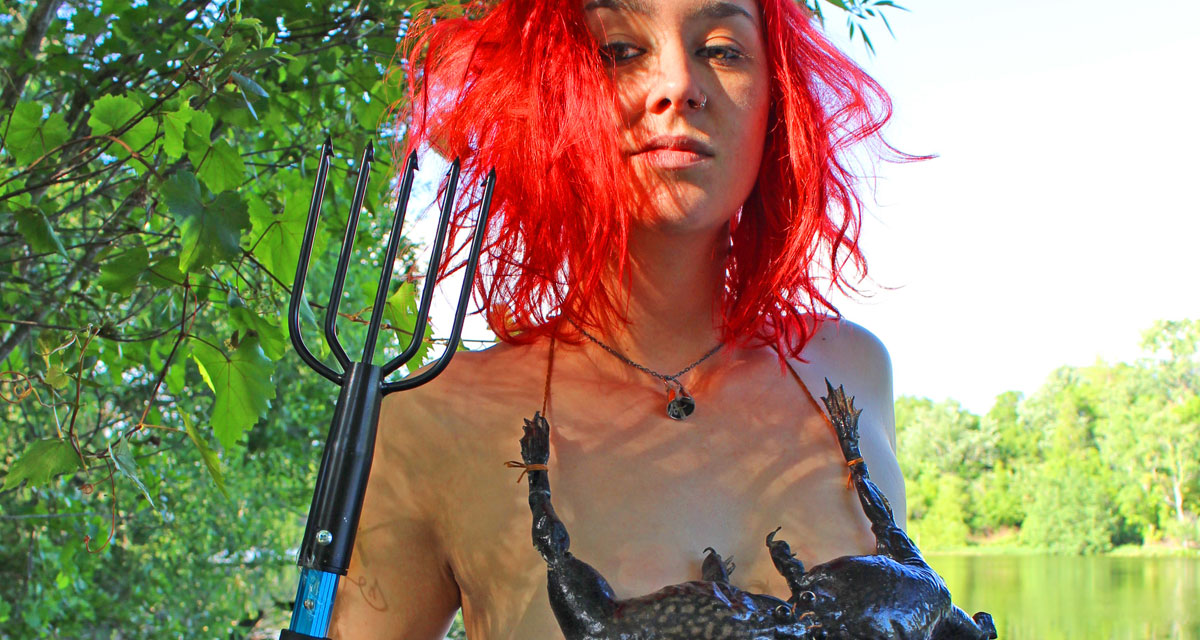 From the frying pan to beach fashion, this frog hunter let no part of her catch go to waste when she made her own bizarre swimwear. 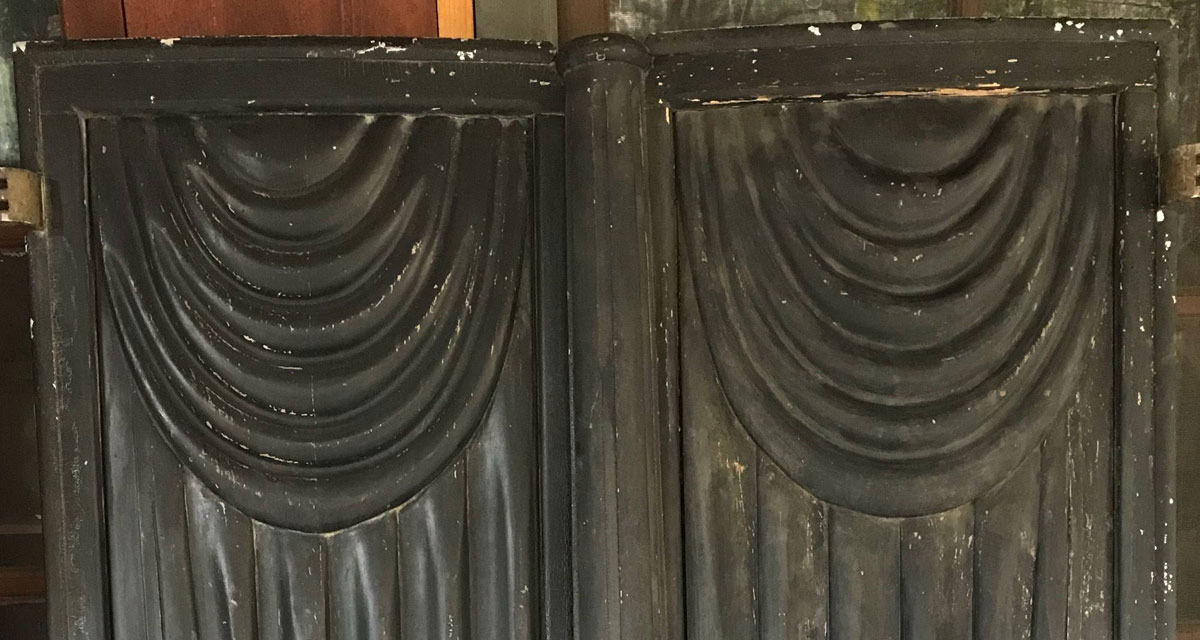 Own these rare, hand-carved wooden remnants of a Victorian funeral carriage. 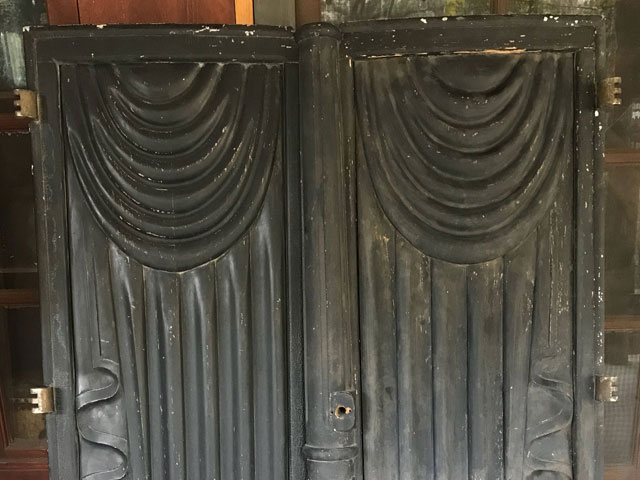 Giving up the ghost in the Victorian age was a particularly romantic affair, as the “beautification of death” movement conjured a new air of extravagance to comfort the grieving. Embalming and post-mortem photography gave the dearly departed an extended lease on life. Mourning jewelry and other art, often infused with hair from the dead, meant a loved one who passed on would never be too far away. Coffins of death’s gilded age were trimmed with ornamental hardware, including decorative thumbscrews and plates inscribed with names, commemorative phrases (Our Darling), symbolism, or, in the case of the rare Sad Hour coffin plaque, depicting the time of death.

Likewise, the horse-drawn hearses that conveyed the dead to their final places of rest were elegant black carriages adorned with plumes of ostrich feathers and ornate, hand-carved wooden panels.

Few remain today, which is why these original Victorian hearse doors and panels available from artist and Etsy seller Sara Radovanovitch are particularly enchanting.

Turn-of-the-century doors from the back of a Victorian funeral carriage. Very rare to come by these! Can be repurposed into cabinet doors for a gothic style cabinet of curiosities, armoire, or perhaps a headboard for a bed? Very unique and beautifully carved panels with original hinges attached. Very sturdy with no wood rot, only some weathering on the matte black paint that coincides with its age. 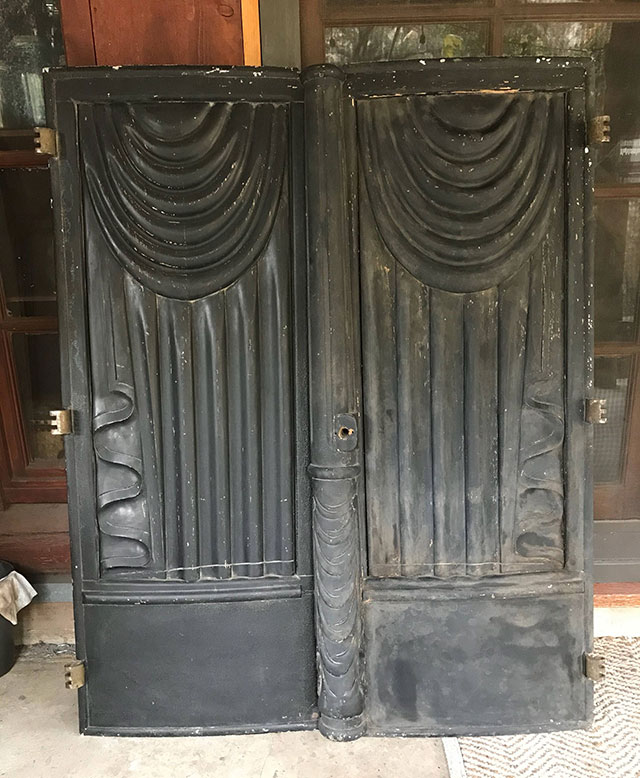 The panels with carved floral designs are equally full of possibilities, but they would look great just hanging on the wall beside your Ouija board collection: 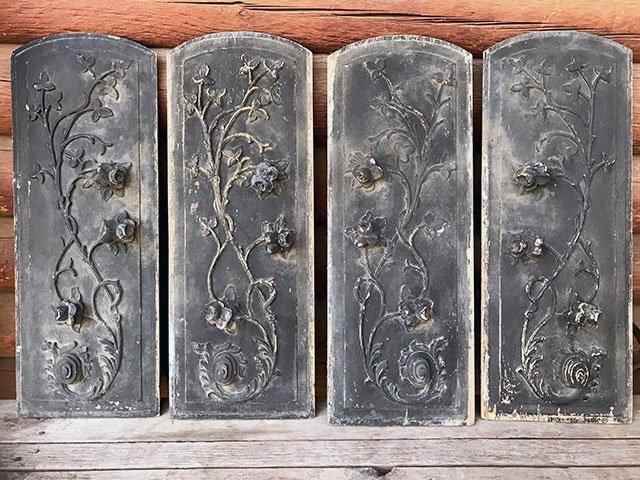