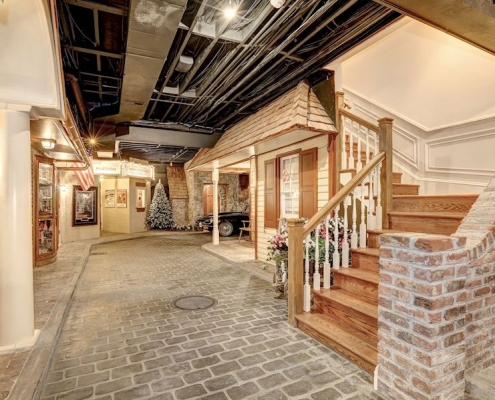 Just the comments alone on this page tells you that Amerikwa is already a post-apocalyptic nightmare full of post-humans. The sheer naivete of people to believe this place has no exits or air filtration system. This facility has one of the most advanced air processing plants in all of Las Vegas.

I think after a month of looking at that decor Id slit my wrists.

Fun to look at. Home forever after a nuclear disaster? No thanks.

I used to live next door to this house for 2 years…. My cat loved playing on their “Roof”. looked like a big abandoned lot of dirt with giant rocks… there is also an above ground portion of the house that faces the street.

Reminds me of the underground bunker in the movie Blast from the Past.

One thing nobody ever seemed to think of when they built these things is that they would need a completely independent air supply that is not connected to the surface to survive. Otherwise the incoming air would be full of radioactive isotopes and would kill the inhabitant much more slowly and painfully than if they were on the surface during the strike.

More info about this property:

Nolan, if you were old enough to remember the cold war and the over hanging threat of atom war, then you would see this as a piece of heaven…….I learned how to get under my desk in elementary school because of the other “Power”
for Gods sake……..

The most horrendous, nightmarish abode I’ve ever seen. Like a Tim Burton vision of sub-urban America only entombed 26 feet underground with no escape.

This website uses cookies to improve your experience while you navigate through the website. Out of these, the cookies that are categorized as necessary are stored on your browser as they are essential for the working of basic functionalities of the website. We also use third-party cookies that help us analyze and understand how you use this website. These cookies will be stored in your browser only with your consent. You also have the option to opt-out of these cookies. But opting out of some of these cookies may affect your browsing experience.
Necessary Always Enabled
Necessary cookies are absolutely essential for the website to function properly. These cookies ensure basic functionalities and security features of the website, anonymously.
Functional
Functional cookies help to perform certain functionalities like sharing the content of the website on social media platforms, collect feedbacks, and other third-party features.
Performance
Performance cookies are used to understand and analyze the key performance indexes of the website which helps in delivering a better user experience for the visitors.
Analytics
Analytical cookies are used to understand how visitors interact with the website. These cookies help provide information on metrics the number of visitors, bounce rate, traffic source, etc.
Advertisement
Advertisement cookies are used to provide visitors with relevant ads and marketing campaigns. These cookies track visitors across websites and collect information to provide customized ads.
Others
Other uncategorized cookies are those that are being analyzed and have not been classified into a category as yet.
SAVE & ACCEPT
wpDiscuz
21
0
What are your thoughts? Leave a comment!x
()
x
| Reply