Tracking down the Tallmann house in Horicon, Wisconsin, which made headlines in 1988 for the story of a family tormented by a haunted bunk bed. 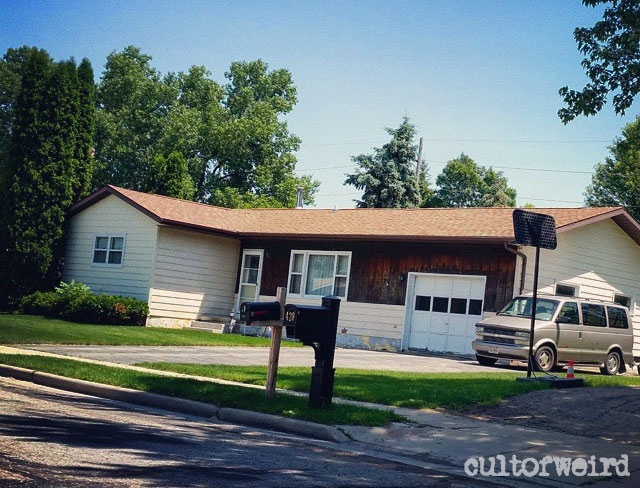 The Tallmann House in Horicon, Wisconsin

Earlier this month I shared the story of the haunted bunk beds in Wisconsin. Well, I couldn’t pass up the opportunity to hunt for the notorious Tallmann house while passing through Horicon for a family wedding over the weekend.

The articles I found during my first round of research did not provide an address, only that it was on Larabee Street. Originally, the exact location had been kept secret. It wasn’t until threats of arson that the chief of police released the address in order to keep nearby homes and families safe.

But that address didn’t seem to make it into any of the original reports that are currently available, so I resorted to Google Maps. Larabee, it turns out, is a short street with few homes architecturally similar to the Tallmann house as seen in the Unsolved Mysteries segment. It didn’t take long to pinpoint a contender from satellite view.

These recently discovered photos were taken inside the Tallmann house during an investigation after the family fled. See the real bunk bed for the first time ever.

A five minute detour from our route to the wedding had us idling suspiciously in front of the infamous house while my kids grumbled in the back about how “Dad always has to stop and take pictures of stuff.”

One end of the quiet street dead ends at a long line of rusted Amtrak passenger train cars with the words “Horicon homeless shelter” spray painted on the side. On the other end is the small, unassuming ranch home with cream-colored siding and wood paneling that was once plastered across television screens and newspapers.

It is an unlikely location for a haunting of Hollywood proportions. Nevertheless, the Horicon haunted house gained quite a bit of notoriety for a series of mysterious phenomena as menacing as anything depicted in Poltergeist or The Amityville Horror.

In 1988, the Tallmann family – Allen, Deborah and their three children – fled their home after nine horrific months of torment by what seemed to be an evil entity connected to a bunk bed they had recently purchased second-hand. Frightening visions of a haggard old woman, fire, ghostly mists and demonic death threats pushed the family to the fringes of their sanity until, finally, they packed some bags and escaped the nightmare on the night of January 11th.

By the end of the week the town was whispering about bleeding walls, a hole to Hell in the basement, and an apparently ghost-powered snowblower that cleaned the driveway all by itself. The media quickly descended on the otherwise sleepy neighborhood, along with hordes of curious thrill seekers.

In the April 1988 edition of The Quill, Barret J. Brunsman wrote:

Ghost rumors had swept through the crowd at the Friday night basketball game at the local high school. Hundreds of cars swept down Larabee Street past the Tallman home. People walked through the yards of the other nine houses on the block, climbing over fences, peering into windows.

Drunks showed up — they weren’t afraid of no ghosts. They tried the doors and windows of the Tallmann home, intent on getting inside to prove their bravery.

When the police ordered the drunks and gawkers to stay away from the house, a few would-be ghostbusters told the cops to “go to hell.”

Arrests for disorderly conduct were made; the street was barricaded.

While it’s unclear how the community first learned of the family’s experiences, it is worth noting that the Tallmann family did not seek out media attention. They were hiding from the press. After talking to the family and becoming convinced of their sincerity, police chief Douglas Glamann was intent on protecting them, as well.

In the absence of facts, the media sensationalized the haunting and regurgitated the gossip circulating around town. Eventually, Glamann talked the Tallmanns into speaking with the press in order to dispel rumors and, hopefully, put an end to the unruly mobs on Larabee Street. He met with journalist James B. Nelson from the Milwaukee Sentinel, who was more interested in writing an article about a genuinely troubled family than exploiting a ghost story.

The family agreed to talk to him.

The Tallmann house on Unsolved Mysteries, 1988

The producers of Unsolved Mysteries, then a brand new television series in it’s first season, soon caught wind of the story. It wasn’t long before a film crew rolled into town to shoot a segment on the haunted bunk bed. They hired local talent for the dramatic reenactments, and filmed on location inside the house with permission from the new owners.

Notably, the segment was not included when the series was released to stream on Amazon in 2017. A Reddit AMA with series creators Terry Dunn Meurer and John Cosgrove helped shed some light on why it may have been excluded.

One fan on Reddit asked, “Can you help me understand what happens behind the scenes that would prompt you to remove individual segments?”

We have a legal staff that keeps track of the cases to make sure that we do not infringe on anyone’s rights. Sometimes a statute of limitations on a case has passed. We always try to be as respectful as we can be to the people who were featured in the segments.

What happened to the bunk bed?

By February 19th, 1988, when Nelson wrote a followup for the Sentinel, the house was up for sale “apparitions and all” and the bunk beds were disposed of in a private landfill in the Horicon area.

“The beds were buried Saturday in a landfill where nobody will ever build,” Deborah told Nelson. “They took them out there and plowed them under.”

The family moved to nearby Beaver Dam, but were still haunted by their experience on Larabee Street.

“I think it’s going to be a long time before things get back to normal,” Deborah said. “I still cannot sit at home at night and not be afraid of the dark.”

Now, more than 30 years later, there is no evidence whatsoever of the hysteria that once gripped Larabee Street. Comments on my last post expressed doubt over the Tallmanns’ story, and claim the current owners of the house have never experienced anything out of the ordinary.

What was the address on Larabee?

BACK IN THE DAY, I TOOK A PHOTO OF THE THE HOUSE OFF THE TV SCREEN AND FOUND LARABEE ST. THIS WAS BACK IN THE EARLY 1990’S. NO GOOGLE MAPS, JUST A ROAD MAP AND ASKED WERE THE STREET WAS.

Charlie Hintz….there is a Hintz family across the street from this house…they live there today….and lived there when tjis happened…..

I worked on this house, and my father was the leader of the builders association that built the 10 homes as a”Self-Help Housing Project”. 10 families built 10 homes, and when all were done, all the families moved in. My mother babysat for the Tallman’s and shared some interesting stories with me that I absolutely believe.

They weren’t victims of the Devil as the Pastor said…I would figure the last thing the Devil wants to do is scare you…just mean ghosts.

I just watched my moms OLD VHS tape from the unsolved mysteries episode..very interesting to see this again!!

I absolutely believe the story as told by unsolved mysteries, I remember watching the episode when I was twelve years old, having had similar experiences myself but nowhere near as scary, I know that spirits act exactly as they did in that particular case, they do strange things, not necessarily harmful to humans but rather just demonstrate strange physical manipulations. They especially play with things electrical and with mechanical objects. Many things that these spirits do will also involve you somehow sensing their presence and somehow knowing what they are going to do before they do it, that part wasn’t… Read more »

Sorry, but I think the family was going through other things, not a haunting. This is a cool story, but I don’t believe in ghosts (mostly because I don’t believe in life after death – when you’re dead, you’re DEAD). I read in Haunted America that Allen was threatening to abandon his family, going on drinking binges…he blamed it on ghosts, of course, but I’ve known too many men in my life who display that behavior. The oldest son wasn’t biologically his, and that usually makes men behave badly as well. The kids overheard each other being scared, and they… Read more »

I lived across the street from this house when this hysteria broke. It was nothing. It was completely and totally over-sensationalized. I remember all the traffic, roadblocks, TV cameras, and the UNSOLVED MYSTERIES program. I remember watching every night to try to see ANYTHING supernatural. There was Nothing. What happened in the house I cannot speak for. But This was a complete scam in my opinion.