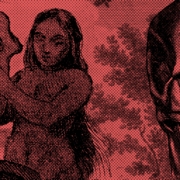 LISTEN: Cannibals in Love by The Mission Creeps

Leave a Reply to device for snoring Cancel reply