Rat kings are groups of dead rats found with their tails mysteriously and elaborately knotted, stuck together with blood, dirt or excrement. 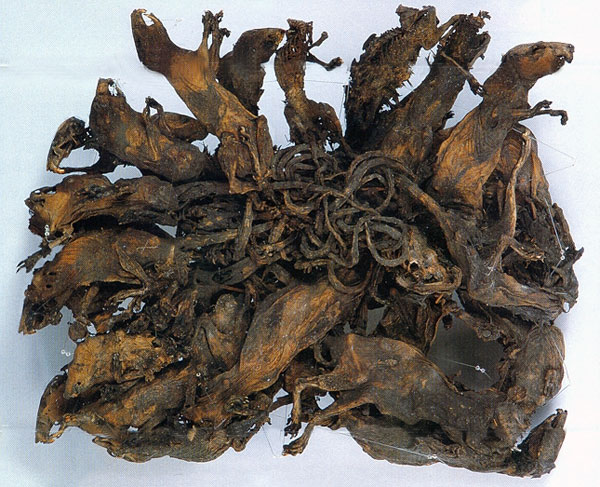 The photo above is of a mummified rat king comprised of 32 rats, the largest known, on display in the scientific museum Mauritianum Altenburg, Germany. It was found in 1828 in a miller’s fireplace in Buchheim.

The earliest report of rat kings comes from 1564. Historically, there are various superstitions surrounding rat kings, and they were often seen as a bad omen, particularly associated with plagues. For whatever reason, most instances of rat kings reported come from Germany.

There have been reports of rat kings in other species, as well, such as mice and squirrels.

A rat king discovered in 1963 by farmer P. van Nijnatten at Rucphen, Netherlands as published by cryptozoologist M. Schneider consists of seven rats. X-ray images show formations of callus at the fractures of their tails which show that the animals survived for an extended period of time with the tails tangled.