The Big Book of Mars by Marc Hartzman

From the psychic whose spirit visited Mars in the 1890s to the modern space race to put people on the Red Planet, The Big Book of Mars is a beautifully illustrated tome packed full of weird stories from our weird and fascinating relationship with our nearest neighbor in the solar system. 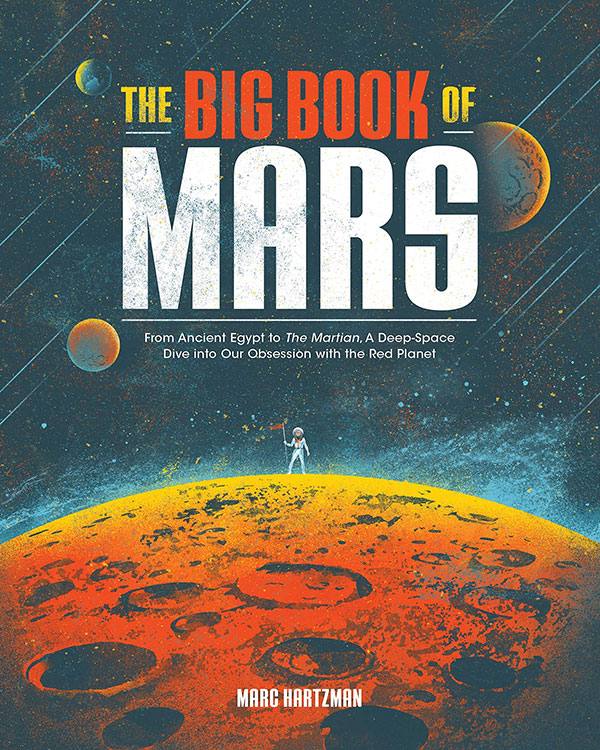 The Big Book of Mars

Filled with entertaining history, archival images, pop culture ephemera, and interviews with NASA scientists, The Big Book of Mars is the most comprehensive look at our relationship with Mars—yesterday, today, and tomorrow.

Mars has been a source of fascination and speculation ever since the Ancient Sumerians observed its blood-red hue and named it for their god of war and plague. But it wasn’t until 1877, when “canals” were observed on the surface of the Red Planet, suggesting the presence of water, that scientists, novelists, filmmakers, and entrepreneurs became obsessed with the question of whether there’s life on Mars. In The War of the Worlds, H.G. Wells suggested that we wouldn’t need to make contact with Martians—they’d come for us—while, many years later, Nikola Tesla claimed that he did make contact.

Since then, Mars has fully invaded pop culture. It has its own day of the week (Tuesday, or martis in Latin), candy bar, and iconic Looney Tunes character. It has been the subject of novels and movies, from Ray Bradbury’s The Martian Chronicles to Mars Attacks! to The Martian. And it has sparked a space-race feud between Elon Musk and Jeff Bezos, who both hope to send a manned mission to Mars in the near future.