The practice of Spiritualism, communicating with the dead, began with the Fox sisters in Hydesville, New York in 1848. In his book The History of Spiritualism, British author Sir Arthur Conan Doyle details this and other evidence for the existence of the afterlife. 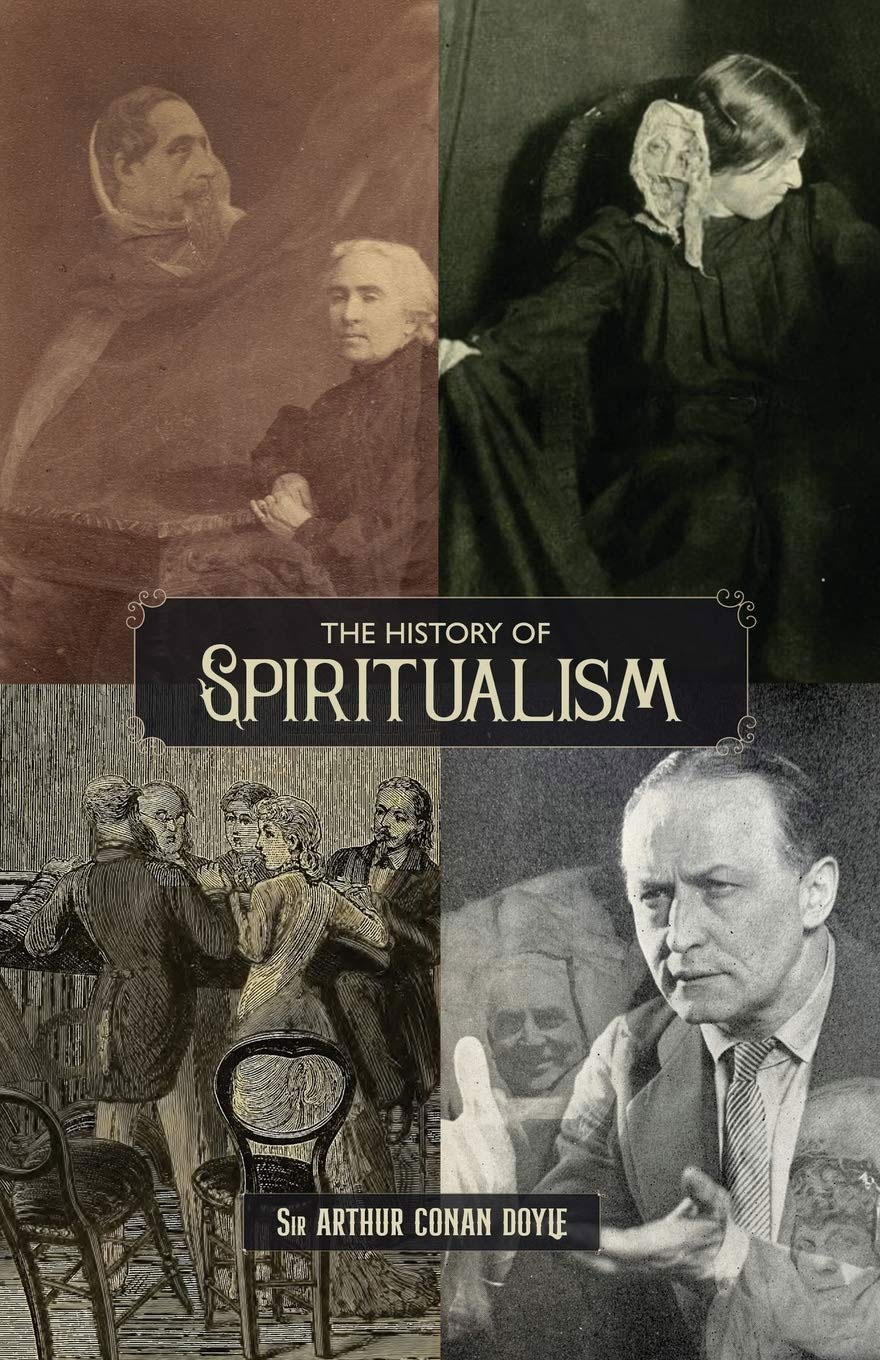 “Spiritualists are in the habit of taking March 31, 1848, as the beginning of all psychic things, because their own movement dates from that day,” Sir Arthur Conan Doyle wrote in his 1926 work The History of Spiritualism. “There has, however, been no time in the recorded history of the world when we do not find traces of preternatural interference and a tardy recognition of them from humanity.”

It’s true that ghosts have existed in some form throughout history, but the afterlife and the paranormal as we know it today really began in Hydesville, New York with the first recorded evidence of a seemingly intelligent presence from beyond the grave.

The Fox family moved into a new house in December, 1847. It wasn’t long before they began to hear unexplained knocking sounds reverberating throughout the walls of the small wooden structure.

It seemed their new home was haunted.

Sisters Margaret and Kate referred to whatever resided in their house with them as Mr. Splitfoot, an old folk name for the devil. But it would soon reveal its true nature when the phenomena reached fever pitch on the night of March 31, 1848.

“Finally, upon the night of March 31 there was a very loud and continued outbreak of inexplicable sounds,” Conan Doyle wrote. “It was on this night that one of the great points of psychic evolution was reached, for it was then that young Kate Fox challenged the unseen power to repeat the snaps of her fingers.”

The entity proved intelligent, as it repeated every one of Kate’s snaps. Even when she snapped her fingers silently, it still responded with a rap that reverberated through the walls of the small house.

Neighbors were called in to witness the events. They asked intimate questions no one else could possibly know, to which it responded correctly in a series of raps corresponding to the letters of the alphabet.

In time the spirit led the Fox family to the dirt cellar, where it claimed its body had been buried ten feet below after being murdered by a previous occupant of the house. The spirit’s name was Charles B. Rosma. 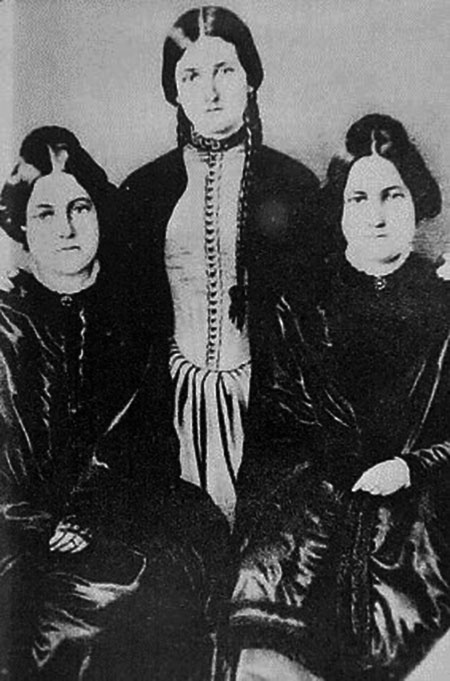 This was just the beginning.

To many, the events presided over by the Fox sisters were clear proof that consciousness exists after death on another plane. It spurred the formation of Spiritualism as a full-fledged religion, with seances and psychic mediums, ectoplasm and ghost photography. There was even a school of Spiritualism in rural Wisconsin where students could learn grammar, mathematics, and channeling the dead.

The massive death toll of the Civil War, WWI and the Spanish Flu only served to grow interest in the idea that we could still communicate with loved ones who were not really gone, but had simply been reborn into Spirit Life.

Modern horror films, with depictions of hauntings, possessions, spirit communication through Ouija boards, and paranormal investigation shows like Ghost Hunters and Ghost Adventures, owe everything to the Fox Sisters…who admitted later in life that it was all a hoax.

The British author is best known today as the creator of literature’s greatest detective, Sherlock Holmes, but he was also a vocal proponent of Spiritualism even in the face of overwhelming evidence of fraud.

As a member of The Ghost Club in London, Conan Doyle sat in on seances, investigated claims of clairvoyance and mediumship, and touted them as authentic even while his contemporaries published works revealing the elaborate trickery of the trade. 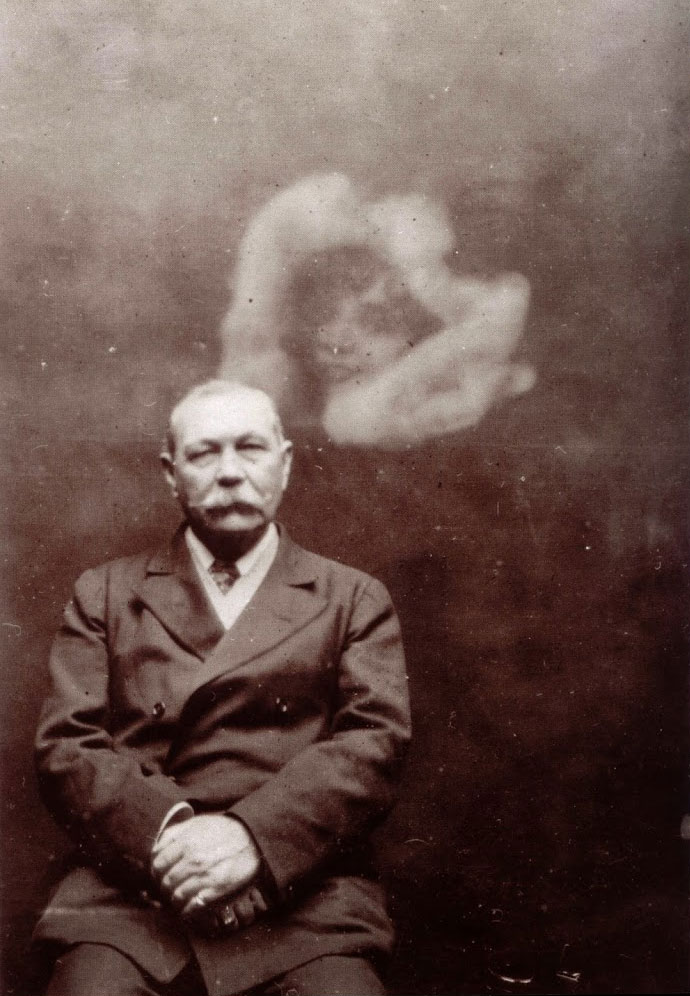 In 1922, he gave a presentation at Carnegie Hall about ectoplasm, and was openly mocked for it.

While in New York, Conan Doyle met with famed illusionist Harry Houdini, who had spent his later years revealing the methods used by mediums to deceive the unwitting public. Houdini conceived of and performed an illusion for Conan Doyle intended to sow the seeds of doubt in Spiritualism.

“Sir Arthur, I have devoted a lot of time and thought to this illusion,” Houdini told him. “I have been working at it, on and off, all winter. I won’t tell you how it was done, but I can assure you it was pure trickery. I did it by perfectly normal means. I devised it to show you what can be done along these lines. Now, I beg of you, Sir Arthur, do not jump to the conclusion that certain things you see are necessarily ‘supernatural,’ or the work of ‘spirits,’ just because you cannot explain them. This is as marvelous a demonstration as you have ever witnessed, given you under test conditions, and I can assure you that it was accomplished by trickery and by nothing else. Do, therefore, be careful in future, in endorsing phenomena just because you cannot explain them. I have given you this test to impress upon you the necessity of caution, and I sincerely hope that you will profit by it.”

The two eventually had a public falling out over their conflicting views.

Spiritualism still exists today, with mediums conjuring the voices of the dead for rapt audiences inside sacred, lightless chambers. Some experiences may have simple, if not purposefully deceptive explanations, while others are truly anomalous and defy reason. Little has changed since Conan Doyle studied the phenomena at the turn of the century.

This new edition of The History of Spiritualism Volumes 1 and 2 from Curious Publications faithfully reproduces Conan Doyle’s work in which he uncovers the movement’s roots, including the early revelations of Emanuel Swedenborg and Edward Irving long before the Fox Sisters, the Scottish physical medium Daniel Dunglas Home, the Davenport Brothers with their spirit cabinet, and more of the peculiar characters who were influential in the formation of Spiritualism.