The Bloody Benders were a family of serial killers who murdered at least 20 unsuspecting travelers in their small Kansas home and then vanished without a trace. 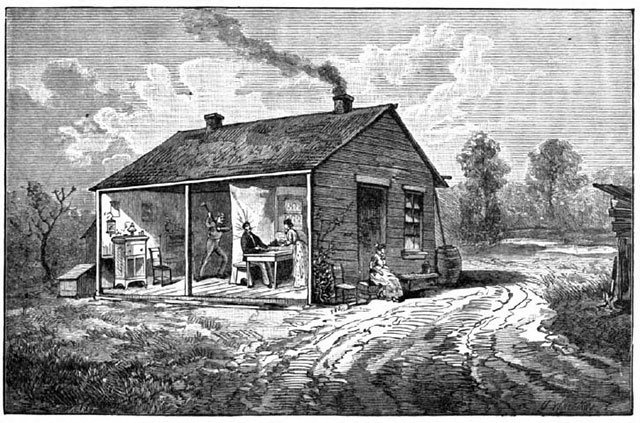 John (Pa) Bender Sr. and son John Bender Jr. arrived with four other families of spiritualists to claim newly vacant Kansas land in October 1870 following relocation of the Osage Indians to a new territory in Oklahoma after the American Civil War.

The Benders claimed 160 acres adjacent to the Great Osage Trail, which was, at the time, the only open road for traveling further west. Ma Bender and daughter Kate arrived the following fall after Pa and John had built a cabin, a barn and a well on the land.

They divided the cabin into two rooms with a piece of canvas wagon cover, using one room for their personal living space, while the other served as a small general store and even a place for travelers to sleep.

Kate’s self-proclaimed healing and psychic abilities became a big attraction. She distributed flyers advertising her ability to cure illnesses, and she conducted séances and lectured on spiritualism.

Beginning in 1871, there was rash of disappearances as travelers passing through area were never heard from again. Reports of missing people in the area became so common that travelers began avoiding the trail altogether.

Suspicion eventually fell on the Bender family in 1873. Three days after a town meeting was held about the disappearances a warrant was issued to search every homestead in the area, a passerby noticed the Bender house had been abandoned.

The Benders themselves had vanished.

The abandoned home of the Bloody Benders

Upon entering the abandoned home, the search party noticed a horrible smell. They traced it to a trap door beneath a bed that had been nailed shut. They pried it open to discover a 6-foot deep pit beneath the house. The soil was soaked in clotted blood.

The men physically lifted the house and moved it to dig beneath, but no bodies were found.

They began to probe the surrounding land with a metal rod, checking the disturbed soil in the garden and the orchard. That evening the body of Dr. William Henry York was discovered buried face down, just beneath the surface in the orchard.

A pit full of blood was discovered beneath the Bender home

As the investigation continued, many more bodies were discovered in the orchard, as well as one in the well, and numerous body parts that did not belong to the already discovered remains.

The victims were all found to have had their heads bashed in with a hammer and their throats cut. Newspapers reported they had all been “indecently mutilated.”

The body of one young girl had been found without wounds deemed sufficient to cause death, leading to speculation that she had been strangled or buried alive. 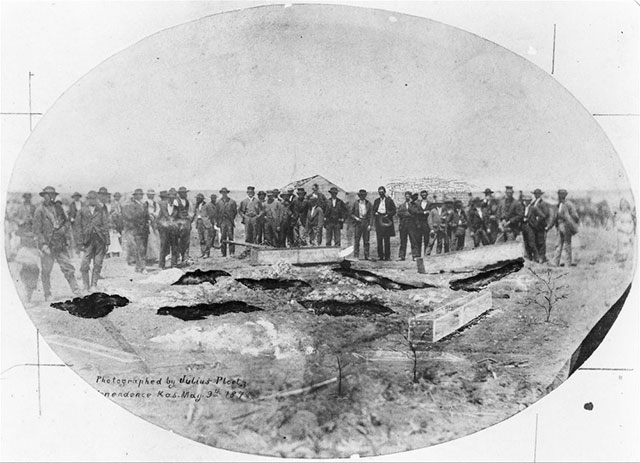 The remains of what was believed to be 20 victims were found on the farm. With the exception of five victims, including Dr. York, none of the bodies were ever claimed. They were buried at the base of a small hill nearby, a location now known as The Bender Mounds.

While the Benders were never found and their fates remain unknown to this day, twelve men “of bad repute in general” were arrested as accomplices, having been involved in disposing of the victims’ stolen goods.

Investigators believed the Benders had visitors sit at a table with their backs to the wagon cloth. Then, while Kate distracted them John Jr. or John Sr. would strike them in the head with a hammer, slit their throats, and drop them through the trap door into the pit below until they could be stripped of valuables and buried in the garden.

Word of mouth quickly spread about the murders, bringing thousands of people from across the country to see the Bender homestead. Souvenir hunters took everything that remained, including the corral fence and the stones that lined the cellar and well.

By 1886 there was nothing left of the Bender homestead but the hole in the ground.

A shoe hammer, a claw hammer and a sledgehammer which matched indentations in some of the skulls were on display in the Bender Museum in Cherryvale until it closed in 1978. They can now be seen in a case in the Cherryvale Museum.

A small knife reportedly found hidden in a mantel clock in the Bender house can be viewed upon request at the Kansas Museum of History.

The blade is still covered in reddish-brown stains.

It’s too late for Edward Gorey to illustrate this story…or is it? 😉

Why an American serial killer in Europe? Europe does have lots of serial killers. They just aren’t recognized as such due to differences in laws and how to determine a serial killer from everyone else. Besides, serial killers strongly tend to stay in populations that they easily blend in the best with.

I have always been fascinated with serial killers and how they work inside. I am getting ready to make a long running web series titled A.S.K.E. (American Serial Killer in Europe) and am currently running a campaign at Indiegogo (http://igg.me/at/aske/x/4535).

I have been studying serial killers for over 10 years now and I am looking for like minded people that are fascinated with serial killers to help support the project and get a better understanding of the mind within.