The D.B. Cooper hijacking is one of the strangest unsolved cases in U.S. history. Nearly 50 years after he parachuted into obscurity, here’s what we know about Dan Cooper’s true identity and the whereabouts of his $200,000 ransom money. 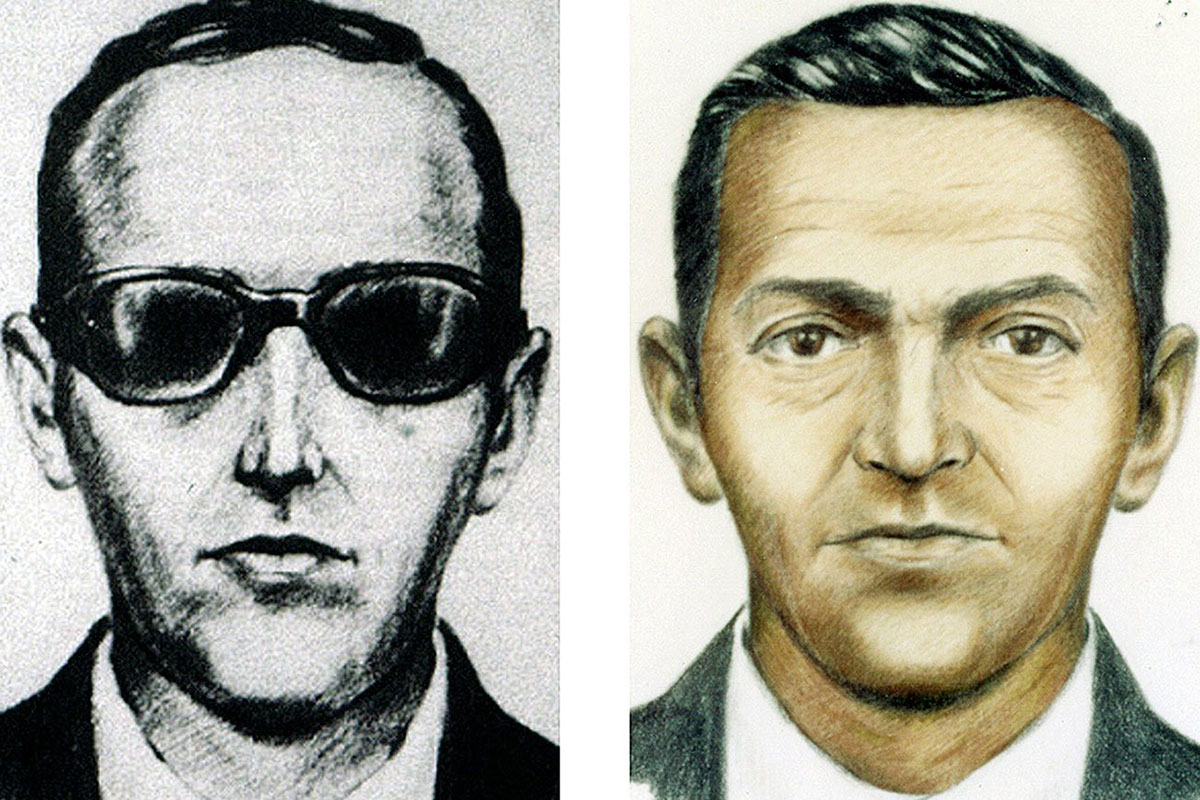 On the day before Thanksgiving, November 24, 1971, an unremarkable middle-aged man bought a plane ticket under the name Dan Cooper, paid with cash, and boarded the Boeing 727 for a short afternoon flight from Portland to Seattle.

He sat by himself in the back row of Northwest Orient Flight 305.

He ordered a bourbon and soda, and slipped a note to flight attendant Florence Schaffner shortly after takeoff.

Schaffner assumed it was just another passenger slipping her his phone number and slipped it into her pocket. Cooper urged her to read it.

On the note, Cooper had written, “Miss, I have a bomb here. I want you to sit by me.” 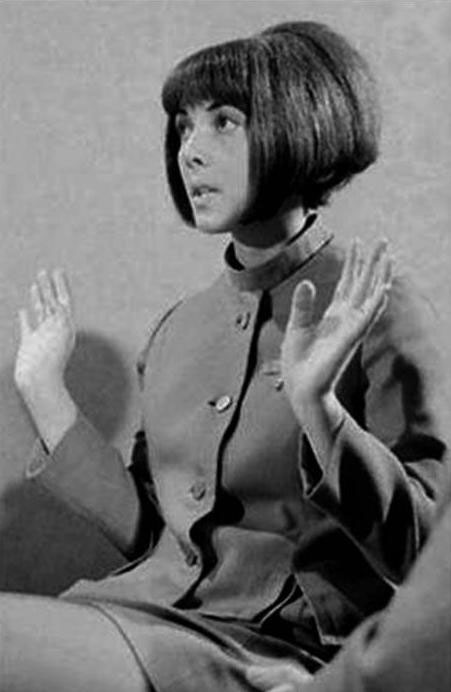 Schaffner sat down in the empty seat beside Cooper. He opened the briefcase, revealing what she described as eight red cylinders connected by wires, and a large cylindrical battery.

Cooper then stated his demands: $200,000 (equivalent to over $1 million in today’s money), four parachutes, and a fuel truck waiting to refuel when they landed in Seattle.

“He wasn’t nervous,” flight attendant Tina Mucklow later told investigators. “He seemed rather nice. He was never cruel or nasty. He was thoughtful and calm all the time.”

Mucklow spent the rest of the flight beside Cooper, getting his drinks and lighting his cigarettes while he kept his finger on the bomb trigger.

FBI agents had gathered the money from various banks around Seattle – $200,000 in unmarked $20 bills. Each one was photographed before it was packed up in order to document the serial numbers. 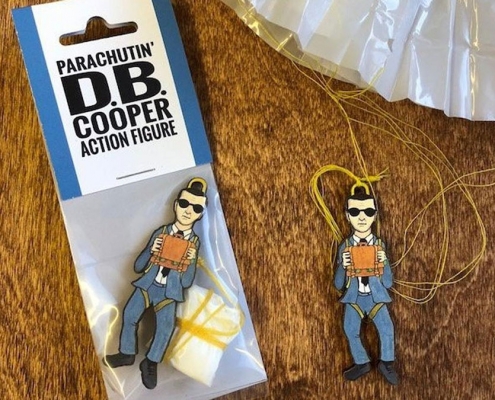 When the flight landed in Seattle, the passengers and most of the crew were exchanged for the cash and parachutes. Cooper kept Mucklow onboard to assist him, but he ordered the other attendants off the plane.

Cooper then relayed a very specific flight plan to the pilots. He instructed them to fly southeast for Mexico City (though they agreed to stop in Reno instead so the plane could refuel), keep it below 10,000 feet, fly as slow as the Boeing 727 could go without stalling (about 200mph), keep the wing flaps lowered 15 degrees, and leave the landing gear down.

After takeoff, Cooper ordered the remaining crew into the cockpit, lowered the 727’s rear stairwell, and jumped into the night somewhere over the dense forests of the Pacific Northwest. 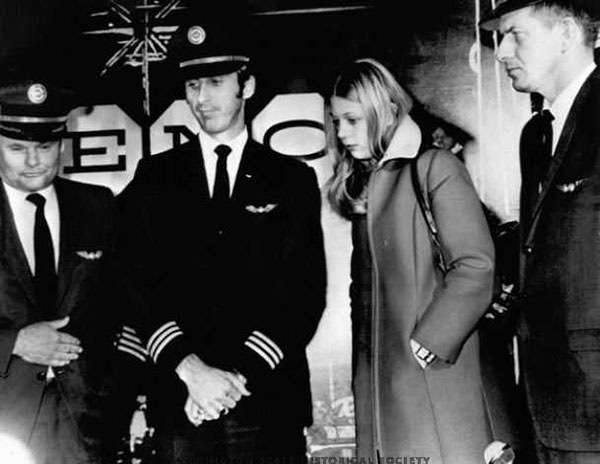 When the plane landed in Reno around midnight, FBI agents stormed aboard. Cooper, his handwritten note, the money, and the parachutes were gone. He left behind only his black tie, the attached tie clip, two parachutes and eight Raleigh cigarette butts in the ashtray.

The FBI conducted a thorough investigation of the area where they believed Cooper parachuted from the plane, but nothing was ever found. Nearly 50 years later, the true identity of the skyjacker remains a mystery.

It is the only unsolved aircraft hijacking case in U.S. history.

The serial numbers of every bill were published publicly in hopes that when Cooper spent the ransom money, it could be traced and he would be located.

There were no leads in the case for nearly a decade.

Then, in February, 1980 came the only evidence that would ever be found. 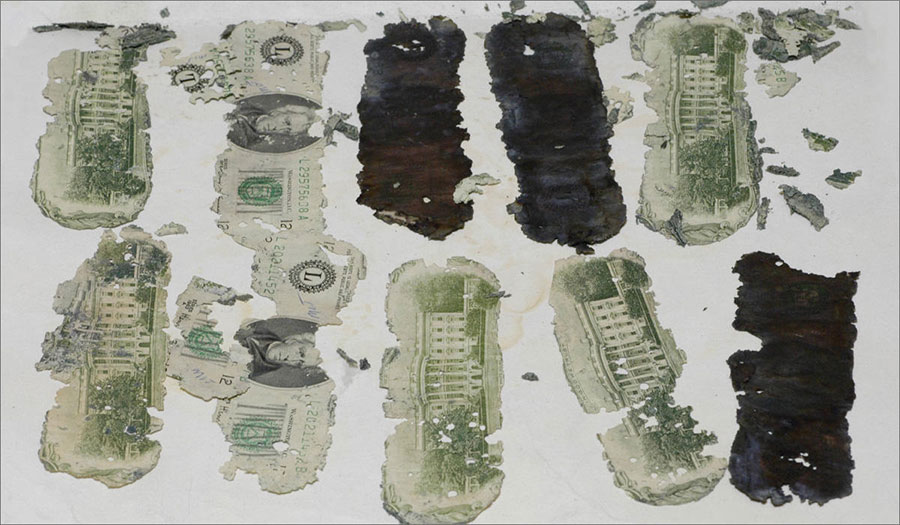 A portion of D.B. Cooper’s ransom money found buried on the bank of the Columbia River in 1980

8-year-old Brian Ingram was vacationing with his family in Washington on the Columbia River. Ingram was playing on the riverbank when he uncovered three bundles of cash. They were badly disintegrated $20 bills totalling about $5,800.

“We were going to make a fire along the river bank,” Ingram says of the discovery. “I was on my hands and knees smoothing out the sand with my arm, and I uncovered three bundles of money just below the surface. My uncle thought we should throw it in the fire.”

The FBI confirmed the cash Ingram found were bills from Cooper’s ransom, still arranged in the order in which they had been delivered to Cooper.

After they were examined, some of the fragmented bills were returned to Ingram.

No other bills confirmed to be from the ransom have ever turned up. 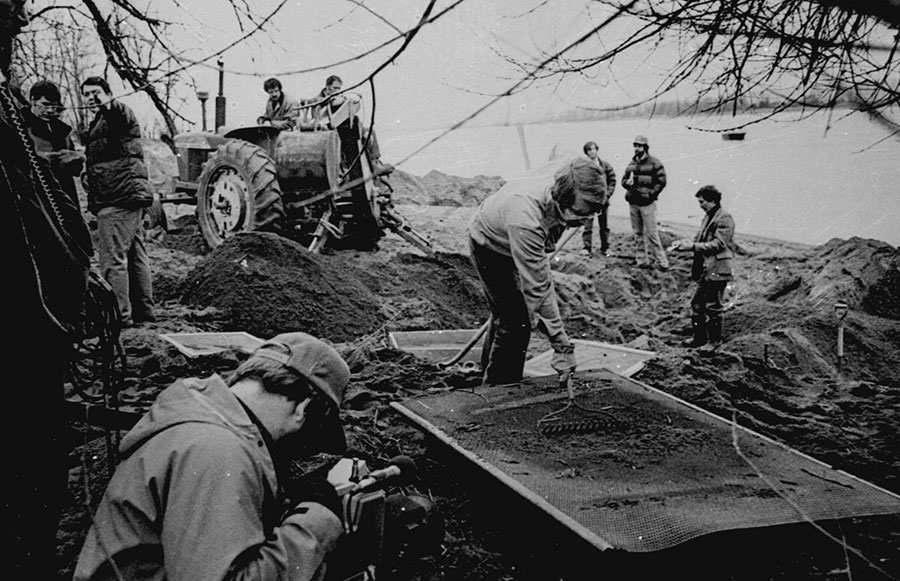 The FBI digs for more of D.B. Cooper’s money on the bank of the Columbia River after $5,800 was found buried there in 1980

While playing in the woods behind the former home of Kenny Christiansen (a relatively recent addition to the D.B. Cooper suspect list), kids found about $1,400 in $20 bills buried in a neatly dug square hole lined with thin boards.

Christiansen’s house was explored in a 2011 episode of Brad Meltzer’s Decoded. During that investigation, the team discovered a similar space constructed between the attic joists and concealed by insulation.

There was nothing inside. Whatever Christiansen kept hidden there had already been removed.

The money found in the woods were mostly 1984 and 1985 series notes, printed more than a decade after Cooper’s skyjacking. 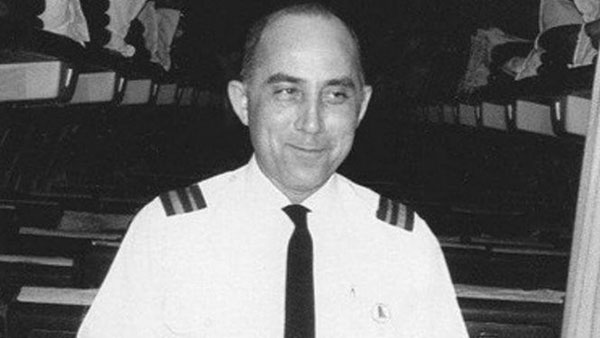 Brian Ingram decided to put up 15 of his 84 tattered pieces of the D.B. Cooper money for Heritage Auction Galleries’ Americana Memorabilia auction in 2008.

In preparation for the sale, the money was examined and certified by Professional Coin Grading Services. They discovered many of the pieces were actually multiple layers of notes that had gone unnoticed. By carefully peeling them apart and piecing fragments together, PCGS staff revealed 35 additional serial numbers not recorded by the FBI.

“Some of these notes have the initials of investigators who examined the recovered money after Ingram found it along the banks of the Columbia River near Vancouver, Washington in February 1980,” Steve Ivy, Co-Chairman of Heritage, stated in the press release.

“The serial numbers all match the FBI’s list of $20 bills given to the skyjacker known as ‘D.B. Cooper’ who parachuted from a jetliner with the cash somewhere between Seattle Washington and Reno, Nevada during a rainstorm on November 24, 1971.  The 15 pieces consigned by Ingram include two Series 1963-A and four Series 1969 Federal Reserve Notes.

On auction day, the fragments sold for over $37,000 – more than three times the estimate. Two nearly complete bills went for $6,500 each.

In 2016, the FBI announced they were abandoning the decades-long manhunt for D.B. Cooper.

“Following one of the longest and most exhaustive investigations in our history,” the Seattle FBI office announced, “on July 8, 2016, the FBI redirected resources allocated to the D.B. Cooper case in order to focus on other investigative priorities.”

The statement added: “Although the FBI will no longer actively investigate this case, should specific physical evidence emerge—related specifically to the parachutes or the money taken by the hijacker—individuals with those materials are asked to contact their local FBI field office.”

Aside from accusations from suspicious family members, various suspects identified by amateur investigators, and a couple deathbed confessions, no other credible evidence has ever been found and the true identity of America’s most notorious sky pirate remains a mystery. 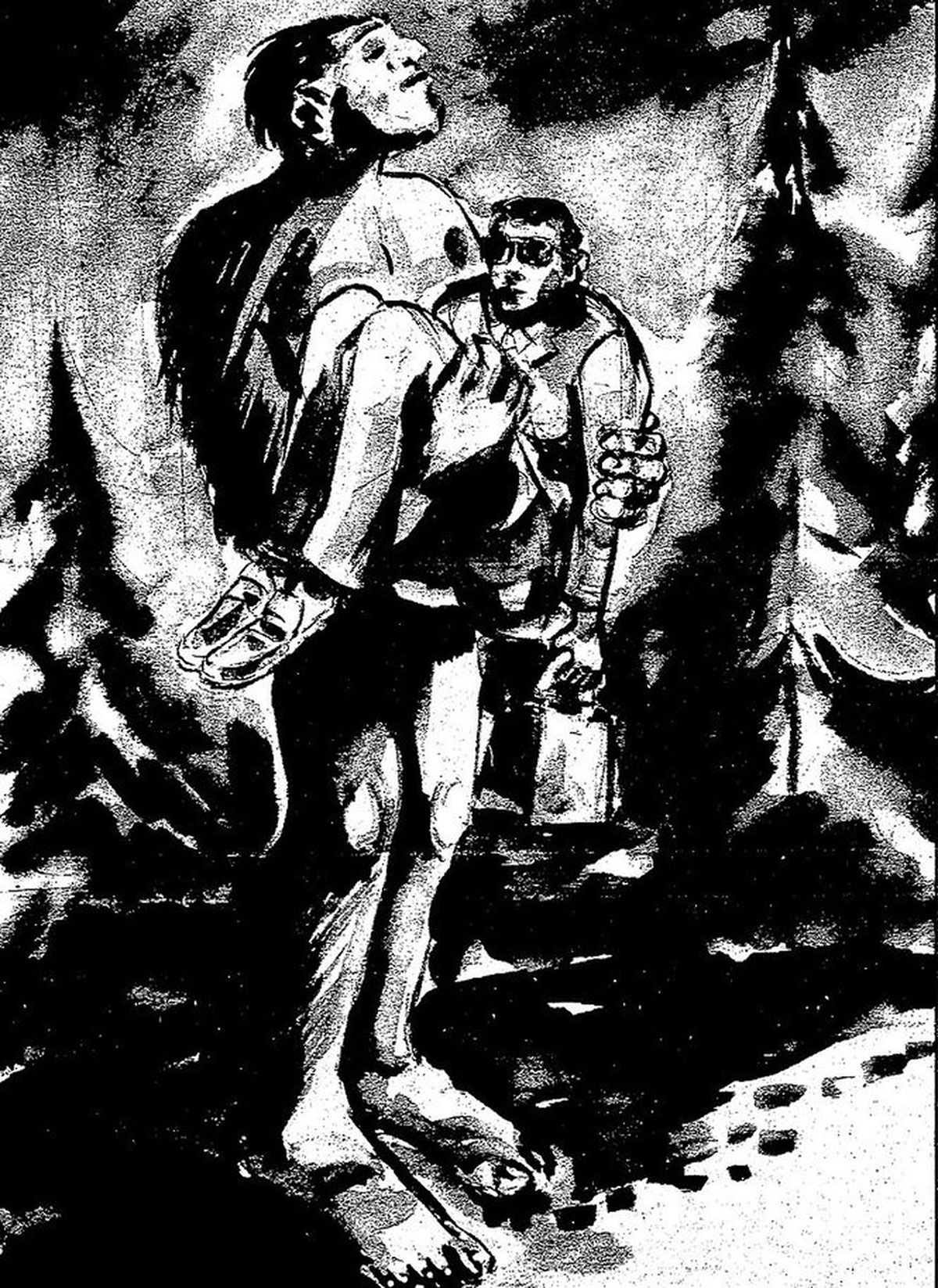 Bigfoot, another legend of the Pacific Northwest, carries D.B. Cooper to safety in this illustration from The Oregonian

Who was D.B. Cooper, why did he leave $5,800 on the banks of the Columbia River, and why have none of the remaining $20 notes from his ransom ever been identified? 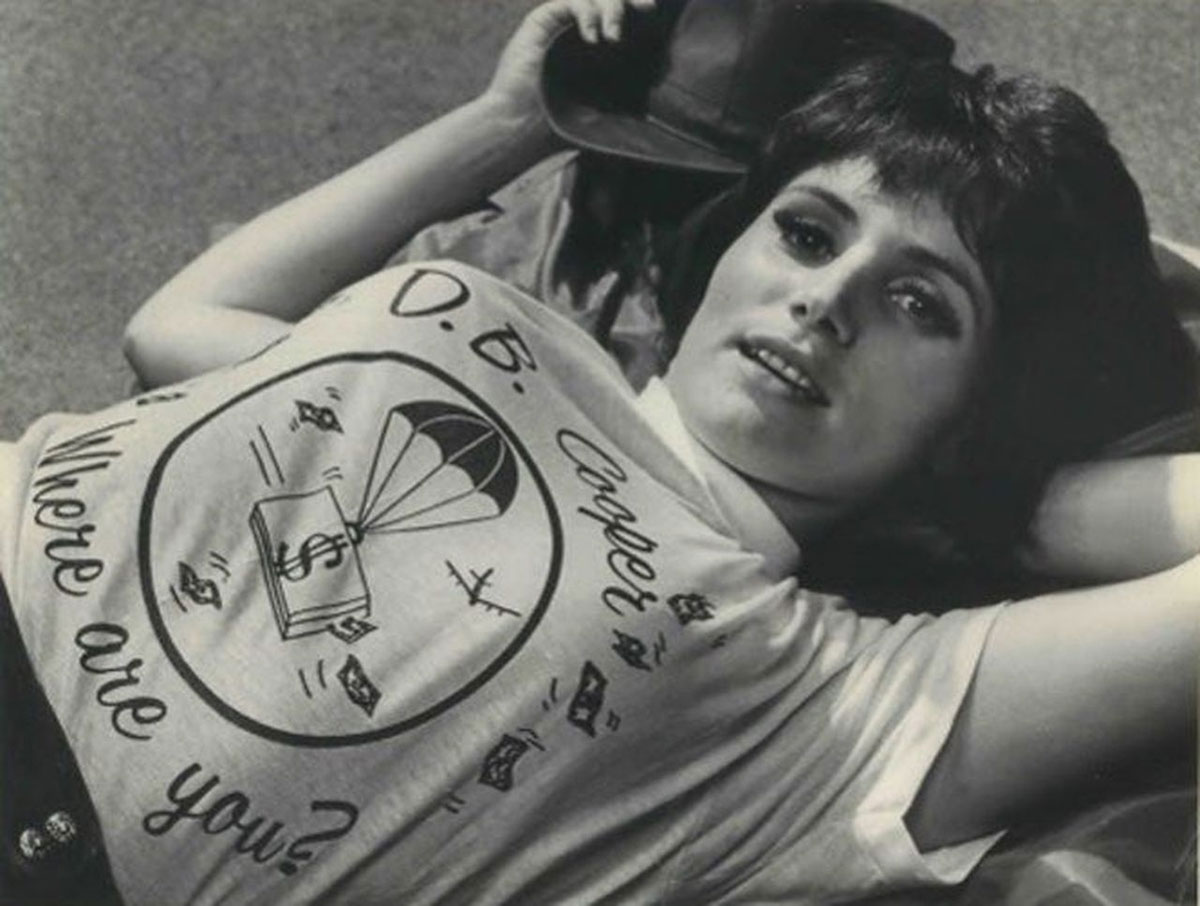