On July 21, 1867 Reverend Thomas Baker was killed and eaten by a remote tribe of Fiji in exchange for a whale’s tooth. 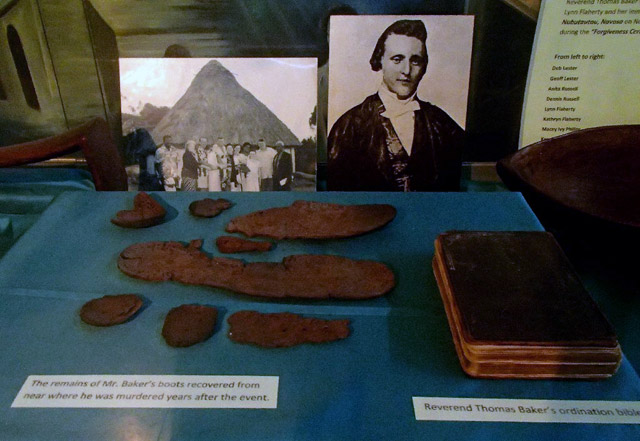 Thomas Baker, a Methodist preacher from Sydney, arrived in Fiji with his wife in 1859. He had eagerly accepted the appointment, as he felt there was still much pioneering work to be done in the Cannibal Isles. Other missions, such as Tonga, were well established – there were no more heathens to convert. On the Fijian island of Viti Levu, however, there were still inland tribes secluded within the rocky, fortress-like walls of the island’s interior who had yet to see a missionary.

Upon his arrival, Baker made several trips to villages in those mountainous regions. Cakobau, chief of the small island of Bau, had recently converted to Christianity and declared himself king of Fiji, waging wars with those secluded tribes who wanted nothing to do with it. To those tribes, Baker was a threat, maybe even a spy working for Cakobau. Baker was well aware of the dangers involved, as evidenced in his journal. He wrote of an incident in which he got caught in the rain in the village of Vunibua and needed a change of clothes: “I had to change to my skin before a bure full of heathen who feasted on me with their eyes very much to my discomfort.”

Though he was cautious, he never traveled with weapons of any kind. He wrote, “I feel every confidence in going about among the heathen, but I always endeavour to keep my eyes and ears open, and reckon every event I meet with…and trusting alone in God for defence. I believe I shall be secure.” 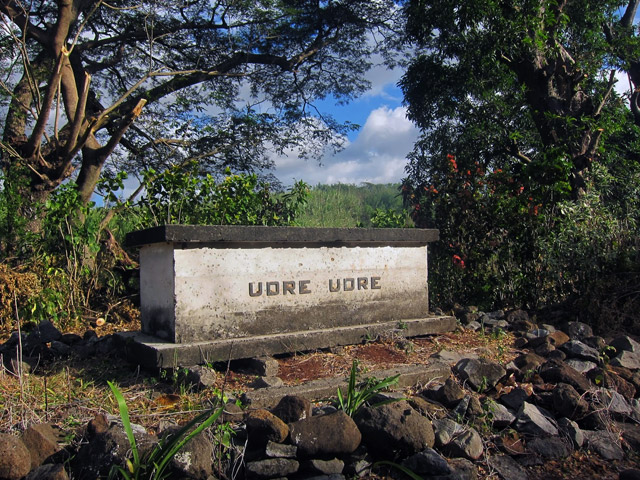 Legendary Fiji chief Udre Udre hold the world record for “Most Prolific Cannibal,” eating as many as 999 people in his lifetime.

In 1867, with tensions growing between Baker and his senior superintendent, who refused to give him credit for his work, he decided it was time to take leave. At a meeting in June he requested to return home for a year with his wife and their three daughters who were born in Fiji, “on account of personal and family affliction.” His request was granted, but before he left he wanted to make one more trek. His goal was to reach some previously uncontacted villages on the far side of the island, an expedition that required going deeper into the rugged and largely unexplored interior than he had before.

Baker and eight native assistants departed the mission at Davuilevu on July 13, 1867 for the inland. They were completely unaware that at the same time, a secret offering from the chief of nearby Navuso had been dispatched to the first village on Baker’s journey in hopes of eliminating the threat once and for all. 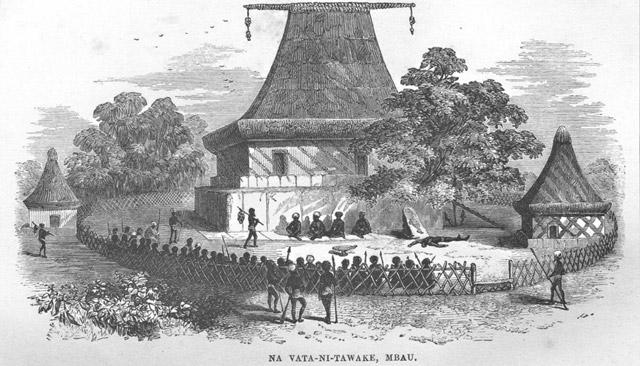 The offering was a polished and oiled sperm whale tooth called a tabua. They could only be obtained from beached whales, or through trades with the Tongans, making them rare, sacred, and highly coveted. Along with their strangled wives and war clubs, chiefs were buried with their accumulated tabua. They were often given as gifts of atonement, or in exchange for goods or services, such as food, shelter…and sometimes more malevolent purposes. The prized tabua could only be accepted if the request was to be fulfilled. In the case of the tooth that preceded Baker on his journey, the Navuso chief’s request was “kill the white man who follows.”

The chief of the first village turned down the offering, not eager to incur the wrath of white men and their endless arsenal of weapons. So the messenger carried the tabua to the next village, and the next. Despite warnings that Baker should turn back, he insisted on going forward with the belief that there was no danger ahead. The other members of his party were growing ever more fearful, but felt ashamed to leave Baker on his own. As they proceeded deeper into the interior, the tabua followed from village to village, each refusing to carry out its terms.

Baker’s tenuous good fortune changed when he reached the Vatusila people in their village of Naqaqadelavatu. 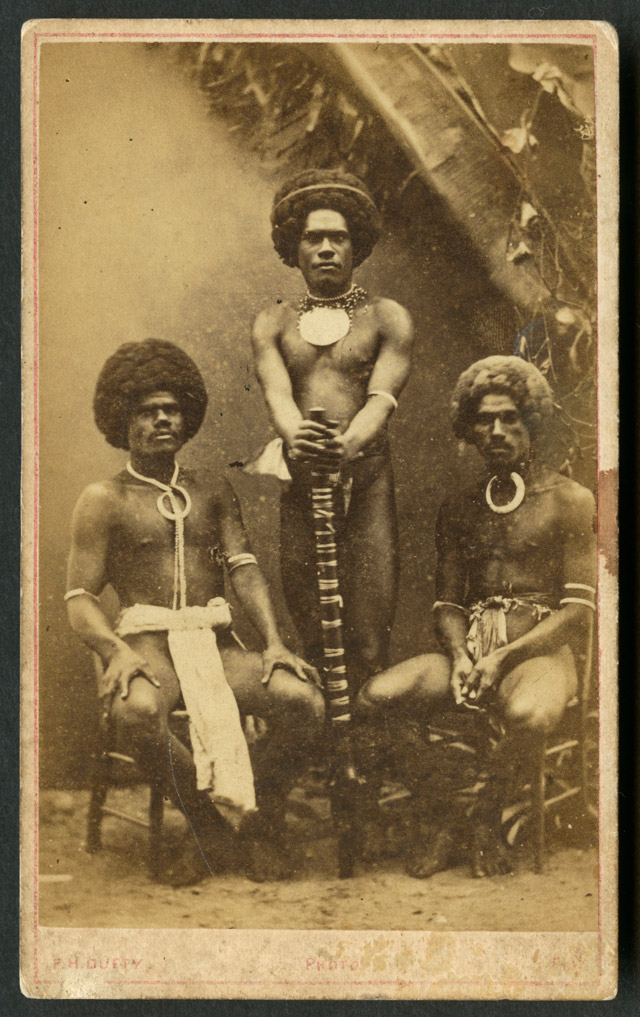 According to the story told by the tribe in the years following Baker’s death, Chief Wawabalavu originally had no intention of accepting the tabua. The party was welcomed hospitably and allowed to stay the night. Wawabalavu was determined to pass the tabua on just as the previous tribesmen had done. That is, until the good reverend committed the grossly offensive act of touching his head.

The morning after the party’s arrival, the story goes that Baker had left his comb lying on his mat in the chief’s hut. As all property was for communal use, especially for the upper class, the chief thought nothing of picking it up and putting it in his hair. Heathens who had not yet become lotu (christian) were known for their large, filthy mops of hair (which is why they were often referred to as the big-heads), and wore combs for scratching. Disgusted and irritated by the chief’s disregard for his property, Baker snatched the comb back.

In Fiji, a chief was considered divine, a shrine of the ancestral god and representative of his forbears. The head is the most sacred part, where a man’s power dwells. Touching him was an insult to his honor, which is why the unique four-pronged cannibal forks were used to feed the chief the flesh of his enemies.

While many believe it was unlikely that Baker would make such a grievous error, it is said that this unpardonable act sealed his fate, and the Vatusila decided to accepted the tabua.

Soon after their departure from the village that morning, Baker’s group was attacked on the road. The reverend, along with most of his Fijian followers, were clubbed and decapitated with an axe. Not wanting to share the full blame for the murders, they then carried the bodies eight miles up the Sigatoka valley to Nandrau, where they filled the earthen ovens with flesh and feasted with their neighbors. Two men managed to escape, and returned to the mission with the grim news. 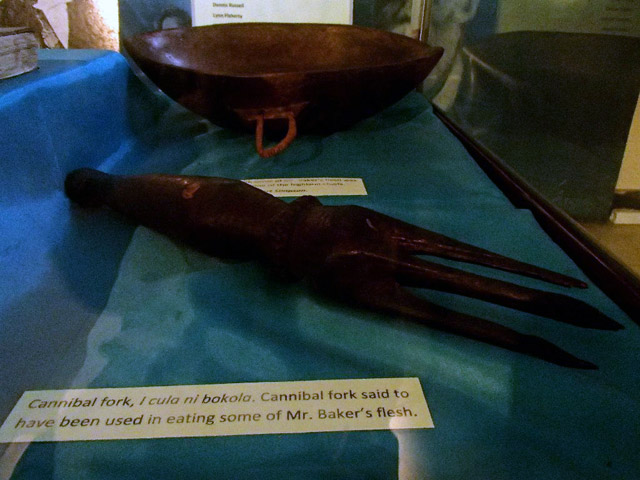 Cannibal fork (I cula ni bakola) used to eat Reverend Thomas Baker, on display at the Fiji Museum in Suva

Many years later author Adolph Brewster wrote in his book The Hill Tribes of Fiji (published in 1922) that he met with the chief of Nandrau, who told him about the incident. The chief admitted to having eaten part of Baker as child. He said the Vatusilas, to whom his mother belonged, sent one of Baker’s thighs to his father, who wanted nothing to do with it and had it tossed out. He and several other small boys found the thigh, cut it up, and cooked it themselves in the traditional manner, wrapped in banana leaves with spinach.

When word of the missionary’s demised reached Bau, Cakobau dispatched swift justice. The resulting bloodshed, as well as the mysterious unrelated deaths of three of Chief Wawabalavu’s sons, were the first realizations by the Vatusila that they had brought a curse down upon themselves by eating Baker and upsetting the christian God. A descendant of Wawabalavu built a stone cairn memorial sometime in the late 1800s or early 1900s at the location where Baker was killed, and the land was offered to the church in atonement.

Reverend Arthur J. Small, who arrived at Bau in 1879, made a pastoral visit to Vatusila at some point during his tenure as the longest-serving Australian Methodist missionary in Fiji. During his visit, he was given an arm bone that belonged to Baker, which had apparently been left in the fork of a molikana tree all those years. Upon his return home, he gave it to a man named Reverend LeLean, who held a quiet funeral ceremony and interred the bone beneath the pulpit of the Baker Memorial Hall of Davuilevu. 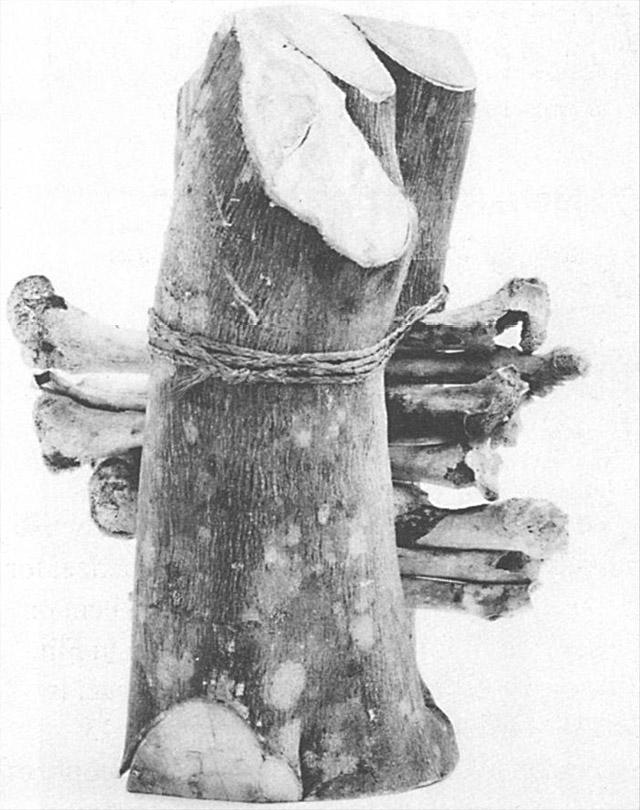 30 years after the murder, the sender of the tabua was still unknown. Though the chief of Navuso was long dead, his remorseful son finally confessed to his father’s transgressions in hopes of ending ongoing illness and misfortune. He offered a string of tabua to the Wesleyan Mission, who granted him absolution.

Today, what remains of the village is abandoned. The chief’s hut and other thatched buildings still stand. There is a large stone in the center of town with a plaque (in both English and Fijian) that reads, “Obedience all the way to death: The Revd. Thomas Baker and his Fijian assistants met their death in this very place on the morning of the 21st July 1876 during a missionary tour of the interior of Viti Levu.”

The stone where he was beheaded, along with the axe believed to have been used for the execution, also remain nearby as a memorial. A flat stone near the river is said to be the place where the bodies were butchered.

In hopes of escaping the curse, the Vatusila moved just down the hill to Nabutautau, a village only barely accessible by a dirt road that turns muddy and impassible with the frequent tropical storms. They have no electricity, medical facilities, or telephones, and up until the recent addition of Thomas Baker Memorial School funded by the Fijian government, children had to walk 15 miles to the nearest school.

Over the years, the Vatusila were the butt of many jokes, mostly involving claims that they ate Baker’s boots because they didn’t know they weren’t part of his feet. In 1993, the impoverished village repented by presenting the cooked soles of Baker’s boots, with teeth marks, to the Methodist Church of Fiji. Still, their blight persisted.

A decade later on November 13, 2003, they invited Baker’s living descendants to the village to offer them an apology directly. Ten of Baker’s descendants arrived in Fiji, including his great-great-grandson Geoff Lester from Australia. They were joined by the prime minister of Fiji Laisenia Qarase, the Great Council of Chiefs, Nabutautau chief Ratu Filimoni Nawawabalavu, the great-grandson of the chief who ordered Baker’s death, a Methodist pastor descending from a surviving member of the Baker party, and hundreds of villagers from the area.

The forgiveness ceremony began with the ritual drinking of kava and a reenactment of the events leading up to Baker’s death. They then held a Christian service, followed by a traditional Fijian apology culminating, after six hours, in the “symbolic cutting of the chains of curse and bondage” and Baker’s relatives releasing balloons into the air. They were then presented with offerings of woven mats, tabua, and a slaughtered cow. The family assured the tribespeople that they held no resentment for the acts of their ancestors, and they believed Baker’s spirit was at rest. 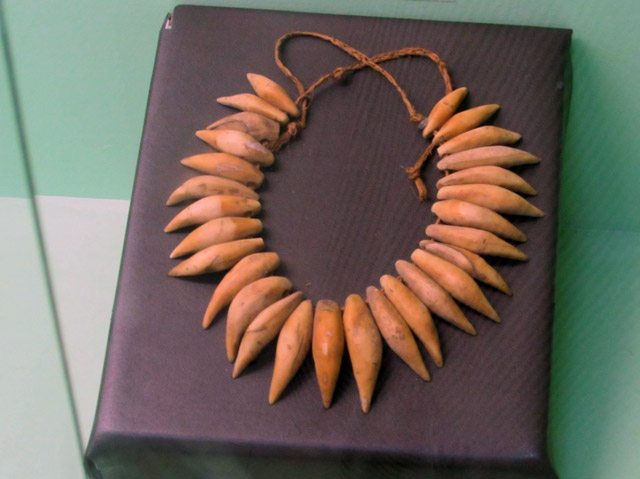 In the years since, the village received funding for a school from the government, leading them to believe the curse has finally been lifted. They avoid the old abandoned village, and are still wary of restless spirits wandering the thick jungle around them. 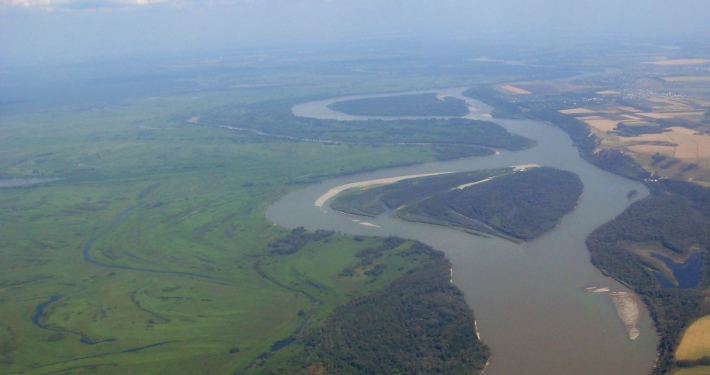 Nazino Island was supposed to become a thriving community, but within weeks the island’s inhabitants resorted to horrific acts of cannibalism to survive. 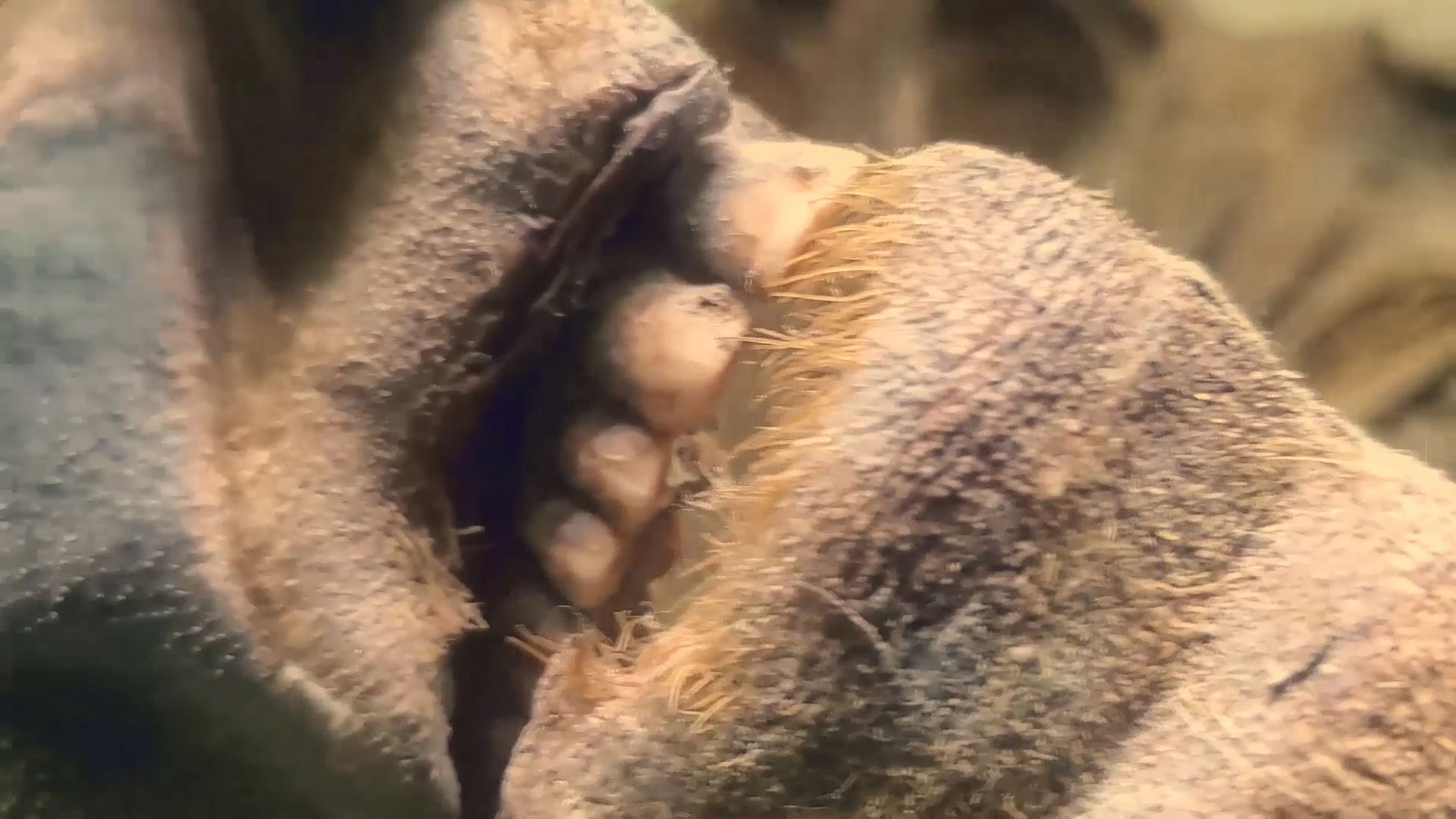