Come face to face with the mummified head of the Dusseldorf Vampire in the dark passages of Ripley’s Believe It or Not in Wisconsin Dells.

Wisconsin Dells is a kitschy family vacation destination known as the “waterpark capital of the world,” where the streets are lined with roller coasters, wave pools, go-kart tracks, sprawling adventure golf courses, hilariously bad haunted houses, and other overpriced attractions. But the Dells also has a dark side, including a haunted attraction where employees contended with real spirits, the Museum of Historic Torture Devices, and Ripley’s Believe It or Not!

Despite low expectations, I’ve wanted to get a glimpse inside Ripley’s ever since I first gazed up at its lost temple facade 20 years ago, when I was just an amateur teenage weirdo. It wasn’t until watching filmmaker John Borowski‘s series Serial Killer Culture TV last weekend, however, that it became clear this summer’s Dells adventure would finally include a pilgrimage to the Odditorium. As the first episode reveals, there’s nowhere else in the world where you can come face to face with the mummified head of deranged German serial killer Peter Kurten.

There were more authentic artifacts inside than I expected, but for Cult of Weird readers and connoisseurs of the bizarre, many of the exhibits are run of the mill oddities: Shrunken heads, cannibal skulls, Masonic ritual skeletons, two-headed taxidermy, kapala skulls, instruments of torture. But encountering the Dusseldorf Vampire’s severed head turning slowly on a hook in a dark room accessible only through a secret passageway makes up for it.

“Beheaded murderer Peter Kurten had his head bisected and mummified in attempt by scientists to understand the workings of his mind,” the accompanying sign reads. “Tried for 68 ghoulish crimes, including 9 murders, Peter Kurten was sentenced to be beheaded in Germany in 1931. So demented was Kurten’s behavior, criminologists believed his brain had to be physically different from the norm in order for him to have concocted his grisly crimes. Therefore, his head was bisected to study his brain and the skull’s internal cavities.” 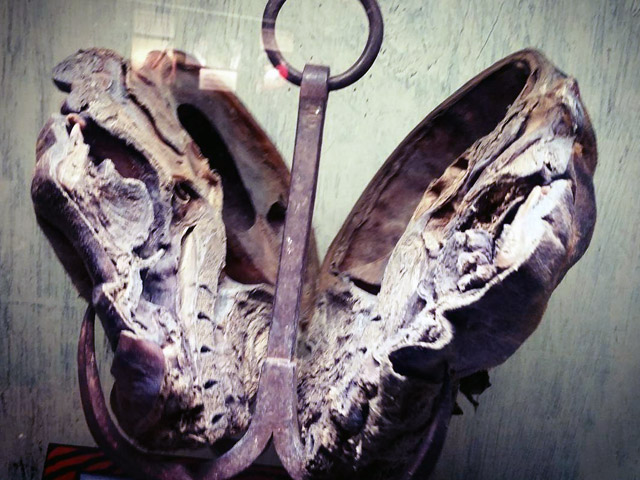 Thanks, great info. Ripley’s, in my experience, is always a fun time. I’ve enjoyed every one I have ever gone to.