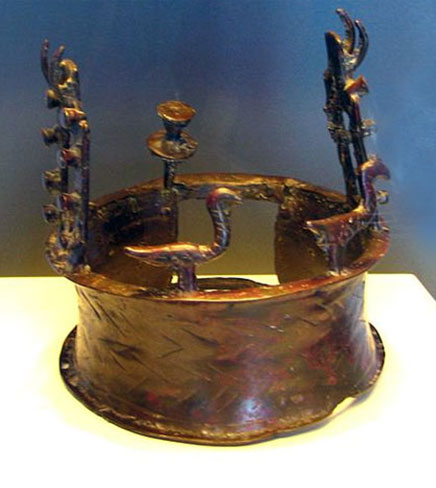 Ancient crown dating to about 3,500 B.C. discovered in the Cave of Treasures near the Dead Sea was used for burial ceremonies during the Copper Age. 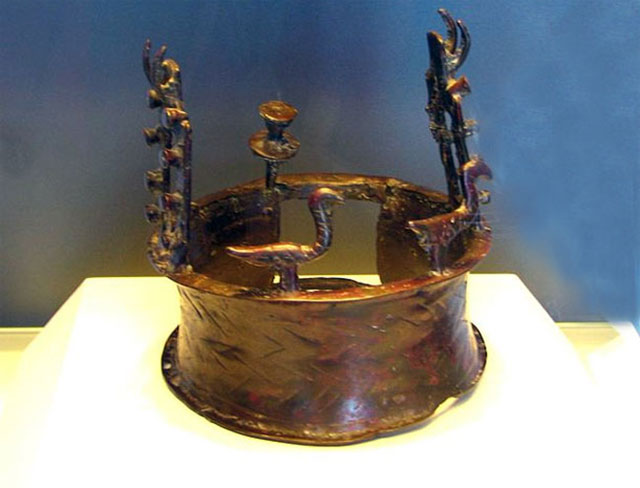 Copper crown discovered in a Dead Sea cave in 1961.

The Nahal Mishmar Hoard is a collection of copper, bronze, ivory and stone artifacts found wrapped in a reed mat in a cave by the Dead Sea. A team searching for Dead Sea scrolls in 1961 discovered the treasure hidden in a crevice, behind a boulder deep within the cave.

Carbon-dating of the mat places it in the Copper Age between 4,000-3,500 B.C. The amazing find included mace heads, scepters, tools and weapons, many of which were unlike anything ever found.

One object of particular interest is a crown, believed to be the oldest in the world. It is a thick copper ring with doors and vultures protruding from the top. Based on the symbolism, researchers believe it was used for funeral rituals.

The crown was unveiled by New York University’s Institute for the Study of the Ancient World as part of the “Masters of Fire: Copper Age Art from Israel” exhibit earlier this year. 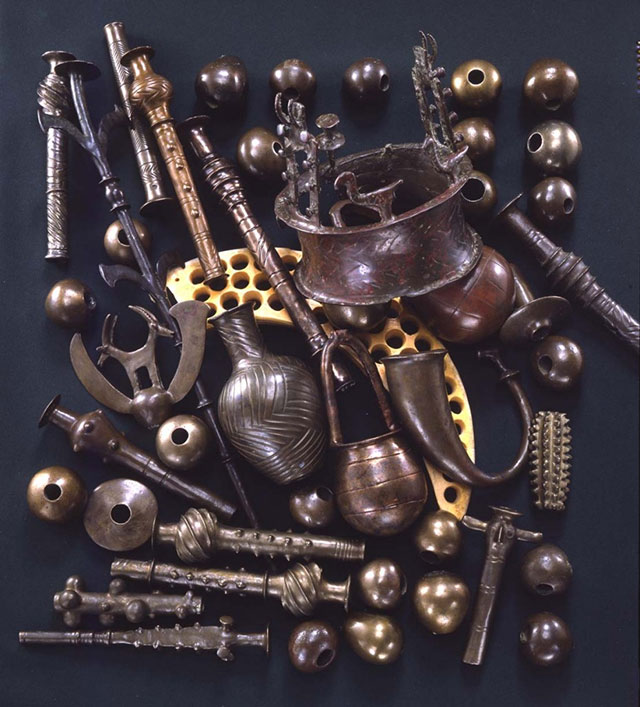 Copper Age artifacts found in the Cave of Treasures near the Dead Sea.

via The Epoch Times and Times of Israel

BTW Jo I can see in your pic that you are a great looking,happy couple!

This crown is really reminiscent of carvings found at Gobekli Tepe, like the doorway or portal and the vultures.

This website uses cookies to improve your experience while you navigate through the website. Out of these, the cookies that are categorized as necessary are stored on your browser as they are essential for the working of basic functionalities of the website. We also use third-party cookies that help us analyze and understand how you use this website. These cookies will be stored in your browser only with your consent. You also have the option to opt-out of these cookies. But opting out of some of these cookies may affect your browsing experience.
Necessary Always Enabled
Necessary cookies are absolutely essential for the website to function properly. These cookies ensure basic functionalities and security features of the website, anonymously.
Functional
Functional cookies help to perform certain functionalities like sharing the content of the website on social media platforms, collect feedbacks, and other third-party features.
Performance
Performance cookies are used to understand and analyze the key performance indexes of the website which helps in delivering a better user experience for the visitors.
Analytics
Analytical cookies are used to understand how visitors interact with the website. These cookies help provide information on metrics the number of visitors, bounce rate, traffic source, etc.
Advertisement
Advertisement cookies are used to provide visitors with relevant ads and marketing campaigns. These cookies track visitors across websites and collect information to provide customized ads.
Others
Other uncategorized cookies are those that are being analyzed and have not been classified into a category as yet.
SAVE & ACCEPT
wpDiscuz
5
0
What are your thoughts? Leave a comment!x
()
x
| Reply