Is this Ed Gein’s cauldron? Did the Wisconsin killer and graverobber use it to hold the entrails of his victims? Here’s the story behind the ghoulish relic now on display in Ghost Adventures star Zak Bagan’s Haunted Museum.

If you’ve been following my writing long enough, you’re probably aware that Cult of Weird’s base of operations is in the weird backwoods of Wisconsin, uniquely positioned in the heart of some of the strangest and most depraved crimes committed in modern times.

Amidst our ghosts and goatmen, UFOs and hodags, there are other, much more tangible evils lurking.

Here, a 12-year-old girl was stabbed and left for dead as a ritual sacrifice to Slenderman.

Milwaukee cannibal Jeffrey Dahmer murdered and dismembered 16 young men before he was finally arrested in 1991.

In 1957, the investigation of a missing hardware store owner in Plainfield lead authorities to the discovery of eccentric handyman Ed Gein‘s deranged hobbies.

For many of us here in Wisconsin, who grow up with this bogeyman in our backyard, the story of Ed Gein becomes a lifelong fascination.

The so-called “House of Horrors” was very real, and locals have been trying to heal from the wounds of that nightmare for nearly 60 years.

I’ve been researching Gein since I was probably about 14, have been to Plainfield many times, and have written about those strange and tragic crimes on numerous occasions hoping to unlock some of the mysteries that remain. Uncover new stories, gain new insight into Ed’s state of mind. 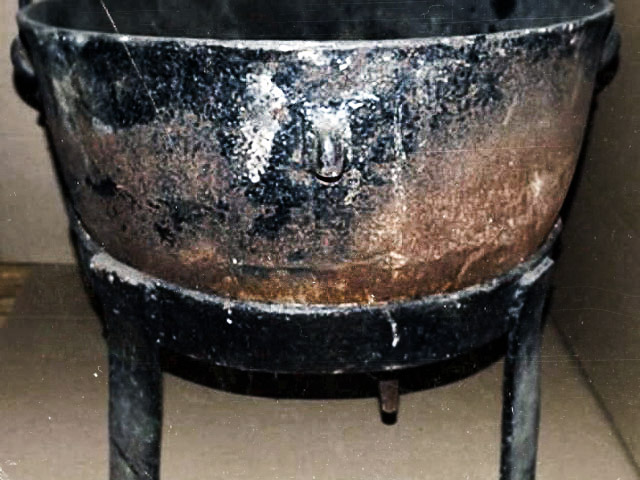 I was contacted by a man named Dan McIntyre in early 2015. He had stumbled onto some of my work and reached out with his own story. He was hoping to drum up interest in an upcoming auction.

McIntyre, it turned out, was hoping to rid himself of a gruesome relic he inherited from his grandmother. She had purchased the object in March of 1958, just a few months after Gein’s arrest when his property and belongings were sold off.

McIntyre said his grandmother found the old, simple cauldron at the sale, and thought it would make a great planter.

Years later, a friend of McIntyre’s named Hollis Brown, who, according to McIntyre, had been a neighbor of the Gein’s, caught a glimpse of the cauldron stuffed away in the garage. Horrified, he realized he had seen it before…on the Gein farm where he was assisting police with the cleanup.

McIntyre described this revelation in an email:

Hollis saw many terrible things. He told me upon entering the home he saw a woman’s breast as the doorbell. Inside he saw a skin lampshade, a comforter/blanket made from human skin, furniture made of skin/breast, bloody gut buckets, a change purse made from a woman’s v****a, a belt with nipples on it. When Hollis saw the cauldron in my parents garage, he recognized it as the same Black Cauldron that he has seen Eds parents use to render hog fat on the farm. He also recognized its as the same cauldron in one of the outbuilding sheds, and remembered Eds sinister use for it. He remembers the cauldron was covered in dry blood and guts, next to two barrels/tubs of bloody human entrails, intestines. 50 yrs. later Hollis recognize the cauldron in my parents garage and turned white as a ghost. I asked him how does he know it was the same one covered in dry blood? He lifted his arm and said,”the hair on my arm stands straight up every time he looks at it in my parents garage.”

I immediately broke the news of this object and its impending sale here on Cult of Weird for fellow Gein researchers and collectors.

That weekend, the cauldron and a few other more mundane objects that belonged to Gein (shovel, skis) were sold.

When I followed up with McIntyre and the auction house, they informed me that Zak Bagans of Ghost Adventures had phoned in the winning bid.

In my communications with McIntyre afterwards, he expressed belief that the cauldron had a dark energy, which might have been dormant while it was sitting covered in his garage. When it was disturbed in preparation for the auction, he seemed to feel something had reawakened.

He experienced a mysterious illness, disruption of nearby electronics, and other phenomena when the cauldron was mentioned. In the presence of the cauldron, he described feelings of unease, dizziness and anxiety.

I’m not so sure that displaying an item that represents such evil is a good idea. What evil will it inspire? I wonder if I should have kept it, and planted flowers in it, only to be forgotten in time. Then there would be one less item in this world to remind us of the evil that lurks on the flipside of mankind’s good.

The cauldron was featured in an April, 2017 episode of Zak Bagan’s series Deadly Possessions on the Travel channel (streaming now on Hulu as Ghost Adventures: Artifacts).

McIntyre appeared on the episode to share his story, as well as a group of paranormal researchers from Wisconsin who experience bad things after purchasing the skis. 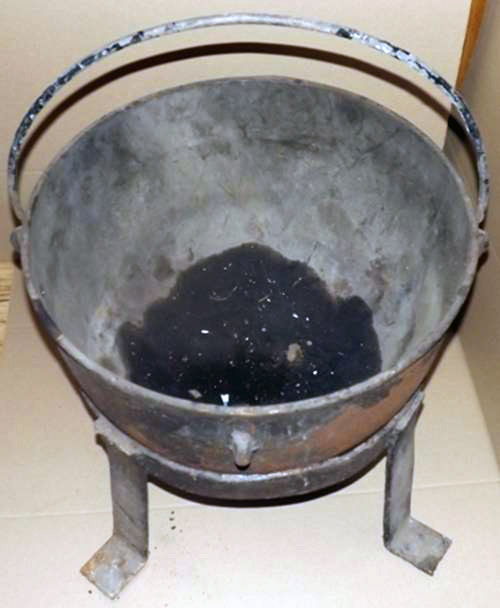 The cauldron can now be seen on display at Bagan’s Haunted Museum in Las Vegas, along with other purportedly haunted or cursed objects.

Next: Where is Ed Gein’s Gravestone?

Im with weeuh On his thoughts and opinions.
Titty doorbell? In a house with no electricity?!
Id love to hear that explanation, as well as how 60% of the objects he “witnessed” never made it on to the police reports, and the verifiable 40% he ‘saw’ was WIDELY reported everywhere else….
Just to make sure, YOU BETTER GO TO ZAK BAGGANS PARANORMAL MUSEUM IN LAS VEGAS!!!!!!
Marketing, marketing, marketing….

I’m not sure that the cauldron is an item that “represents such evil” is appropriate. Ed Gein was not evil. He was insane. His insanity drove him to do strange and unpleasant things. Yes, very disturbing things. Most of his specimens were from grave robbing, not murder.
I prefer to reserve the word evil for sane people who do horrible things to aggrandize themselves. I don’t think Ed Gein ever knew or understand why or what he was doing.

Where did all of this blood slop come from, that was supposed to be in these buckets? Dead people don’t bleed and they drain the blood from bodies when they bury them. I call B. S. Hollis the cauldron man!

Too much of Hollis’ account from ’57 just doesn’t ring true nor does it match up with other on-site reports. ‘Door bell’- where? The lone door people were going thru shows no bell in any pics. No mention of such an occurrence in any accounts by investigators. And Ed did have some visitors now & again, he wouldn’t have hung a breast on a knob on an exterior door. He just wasn’t that blatant about the ‘pieces’.
It calls the entire cauldron story into glaring doubt.

Thanks for this article. I will be watching it on Deadly Possessions tonight!