Looking for a model of Ed Gein digging up a grave? How about an original Weird Trips #2 to complete your collection? Or an HO scale Worden’s Hardware store? Here are some of the unique Ed Gein collectibles you can find on eBay right now. 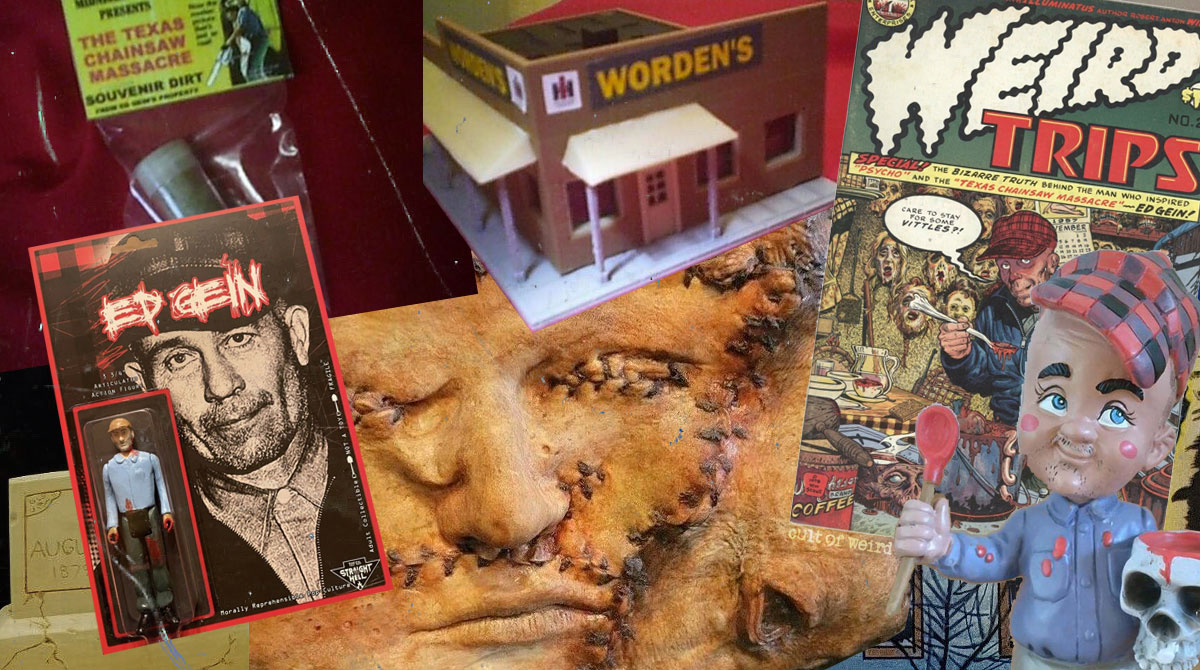 Over the years, Wisconsin murderer and grave robber Ed Gein (more about him here) has inspired countless movies, books, and collectible memorabilia. Many of these pop up on eBay from time to time, including actual dirt from Gein’s grave, replicas of Gein’s ghoulish crafts, and various chunks of wood and other artifacts said to have been found on the former Gein farm in Plainfield.

Even the property itself, where Ed Gein’s house filled with human remains once sat, found its way to eBay.

Here are some of the unique, weird, and rare Ed Gein collectibles you can find on eBay right now that you probably won’t find anywhere else. 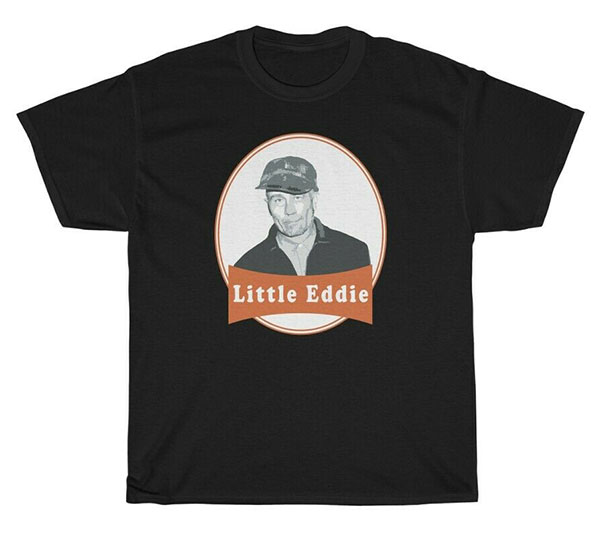 Little Eddie makes the best treats. He even wears Debbie while he makes them. 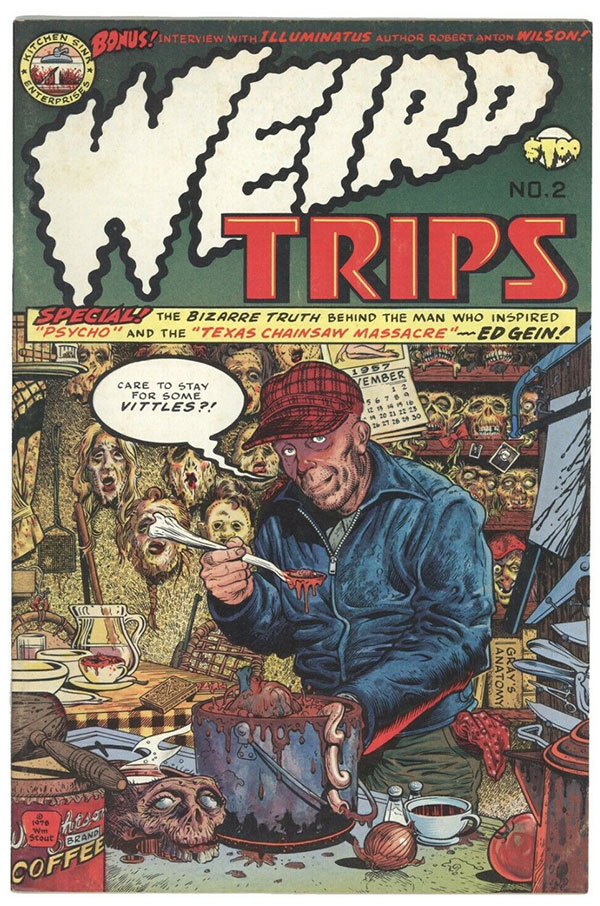 A rare copy of Weird Trips #2

Published in 1978, this second and final issue of Weird Trips magazine features cover art of Ed Gein eating his “vittles” by artist William Stout and includes articles about Aleister Crowley, the number 23, synchronicity, Timothy Leary, the story of a cemetery uprooted by a flood in Tujunga, CA in 1978, and more. 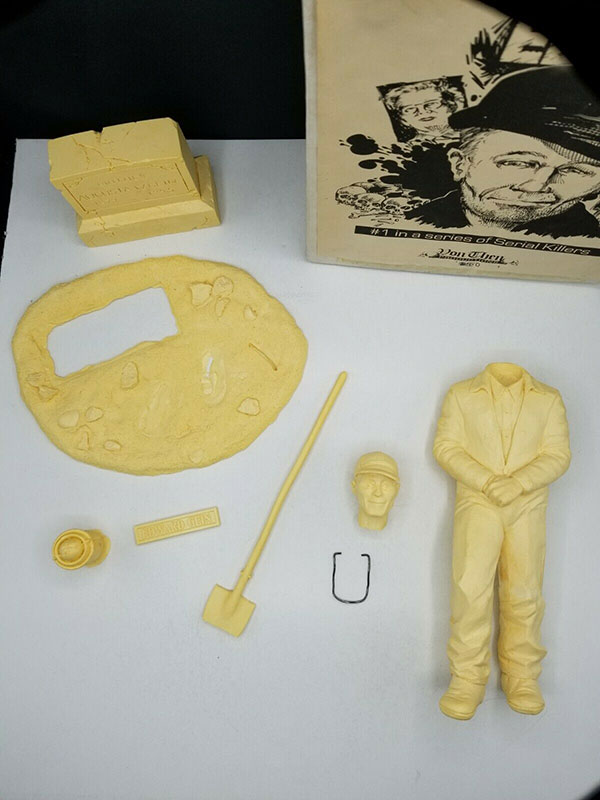 A model diorama kit of Ed Gein standing on his mother’s grave with a shovel? And it even has Augusta’s headstone! Are you kidding me? If I was any good at painting models this thing would be mine. 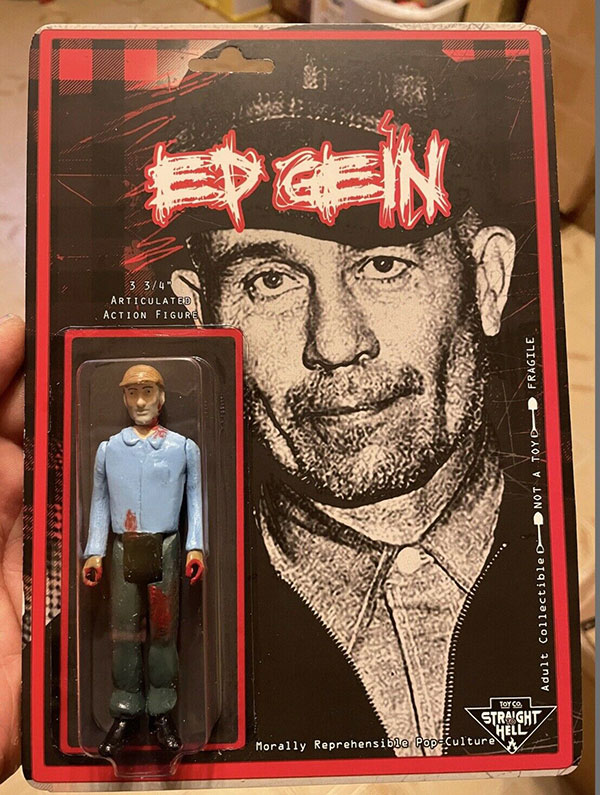 Perfect for digging up your cemetery playset and fashioning furniture out of the other action figures. 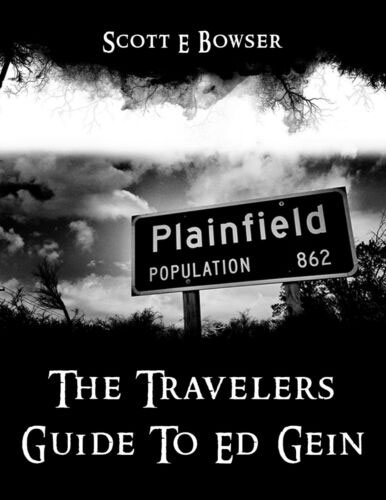 Ed Gein book with my photo on the cover

This one’s a double whammy: A traveler’s guide to Ed Gein (much like this Ed Gein tour guide from Cult of Weird) autographed by author Scott E. Bowser with cover art featuring an unlicensed use of my photo from this post.

NOTE: New copies of this book are available on Amazon right here. 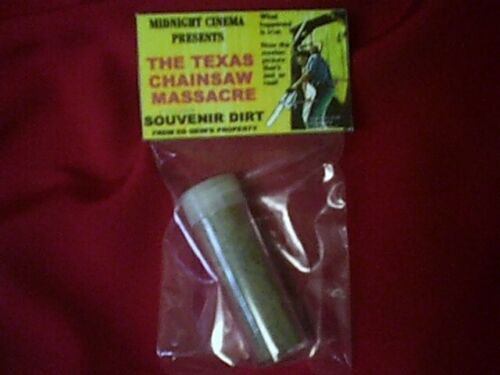 The Texas Chainsaw Massacre’s notorious villain was inspired by Ed Gein, but the film is only loosely based on his story. However, that’s no reason not to brand this vial of dirt from the Gein farm with it.

Dirt tends to be abundant in the ground, and dirt from both the Gein property and the perpetual hole in his grave are common additions to any competent serial killer collection. 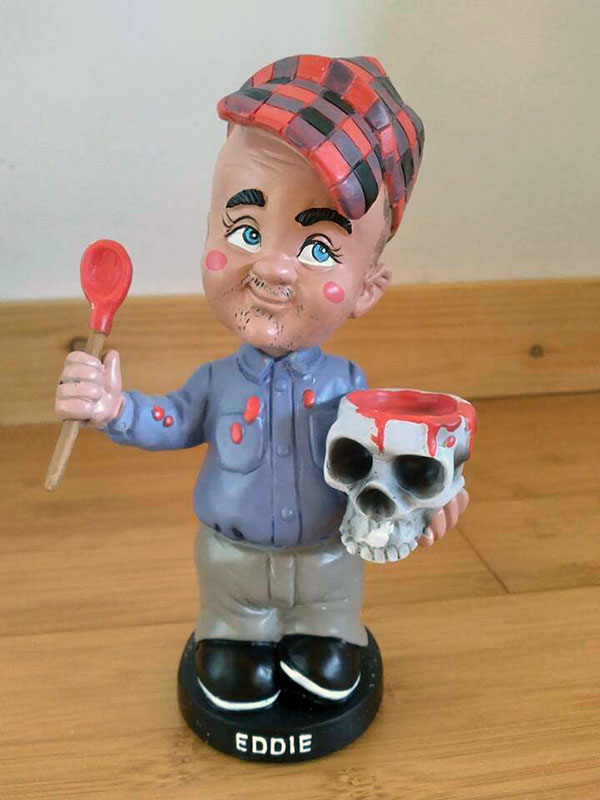 This adorable little Eddie bobble head is part of the Casket Kids collection from Pallbearer Press and absolutely needs to be on your shelf next to that dirt. 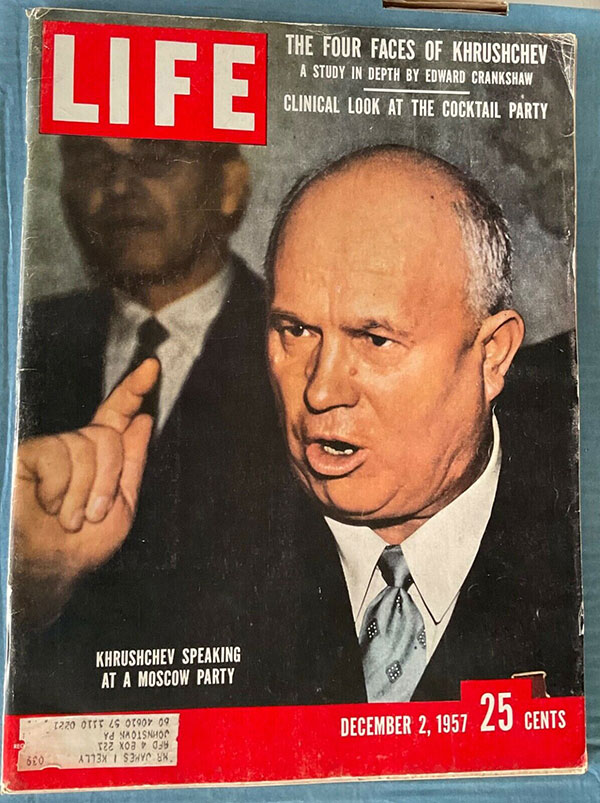 A photographer from Life magazine was on location is Plainfield soon after the grisly contents of Gein’s home were discovered, and many of the details of his crime, as well as the photos from inside the house, were originally published in this December 1957 issue.

A must have for any serious true crime collector. 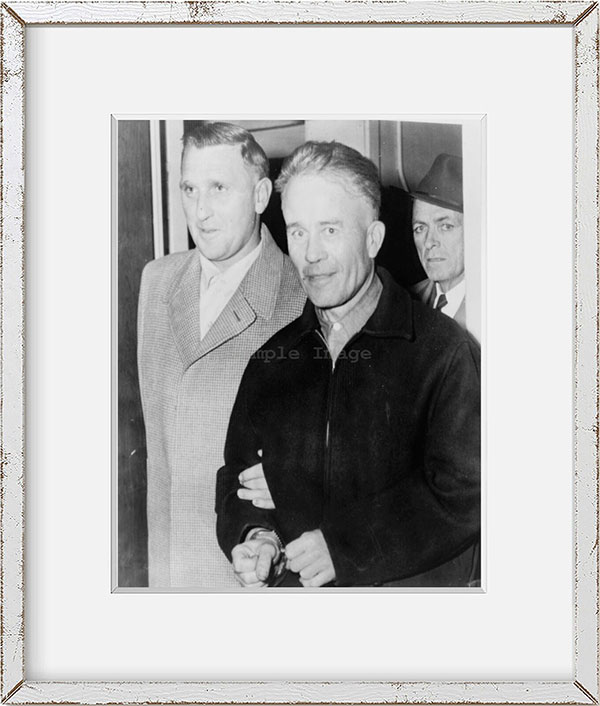 A ready-to-frame print of Ed Gein leaving the Wisconsin state crime lab in November of 1957 soon after his arrest. Look at that nice smile. This will look great on the wall next to the kids’ school portraits. 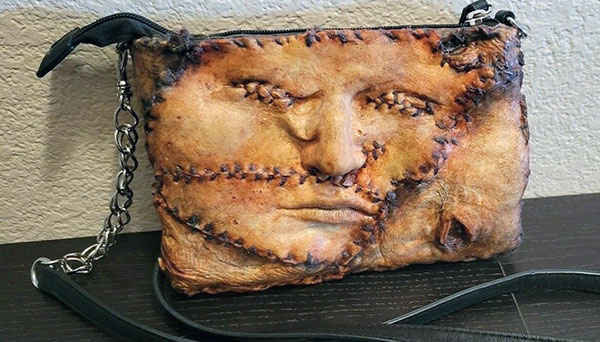 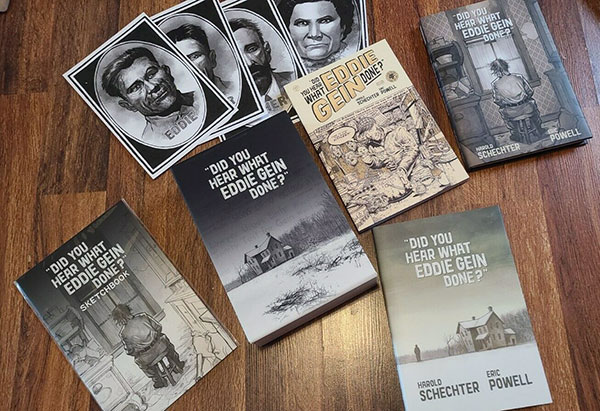 If you missed your shot at getting the Kickstarter exclusives for Eric Powell and Harold Schechter’s graphic novel Did You Hear What Eddie Gein Done? here’s your chance. This set includes Powell’s sketchbook, his portraits of the Gein family, and an edition of the book with William Stout’s art from the elusive Weird Trips comic. 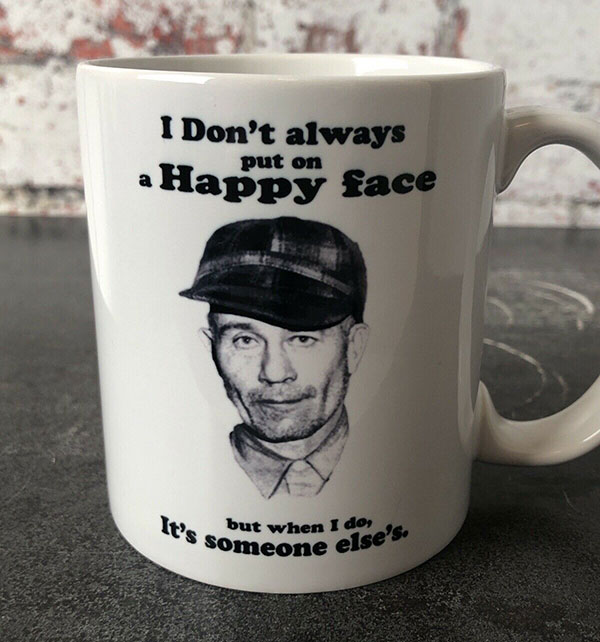 Your morning coffee in this Ed Gein mug will surely help you get your happy on. 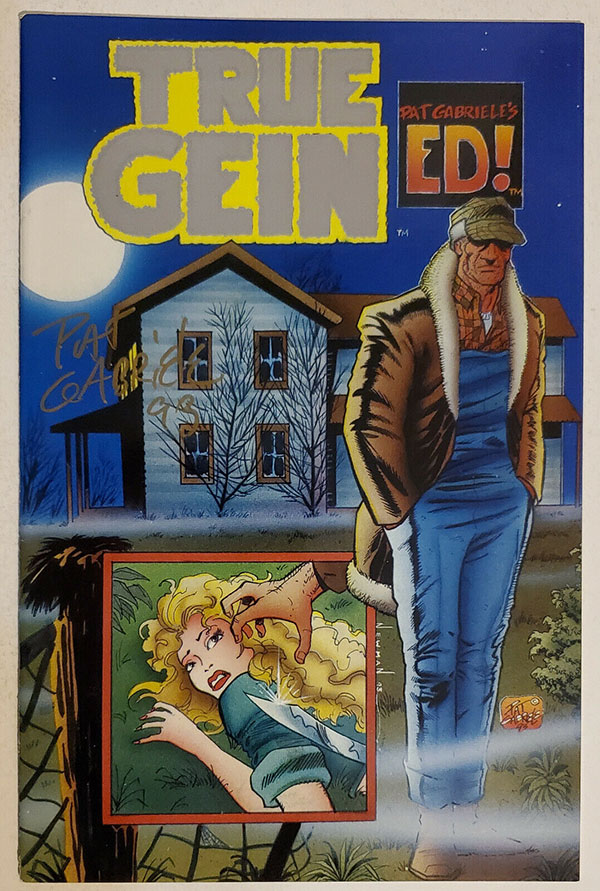 A copy of the True Gein #1 from 1993, signed by artist/writer Pat Gabriele. 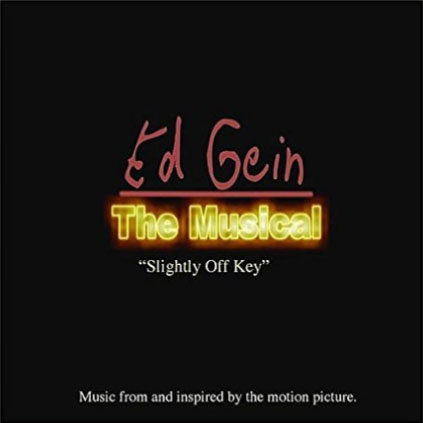 Ed Gein, the Musical is a comedy about the hilarious hijinks of our favorite Plainfield ghoul. It premiered in Wisconsin in 2010. This is the soundtrack. On one of those old fashioned silver disc things. 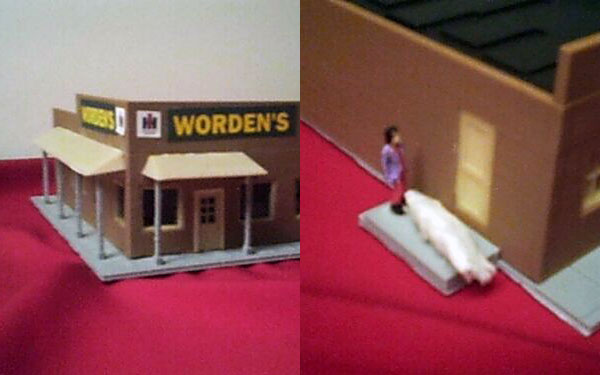 Need to up the creep factor on your model train display? This model of Worden’s Hardware, complete with a dead body on the back loading dock, is just the thing. 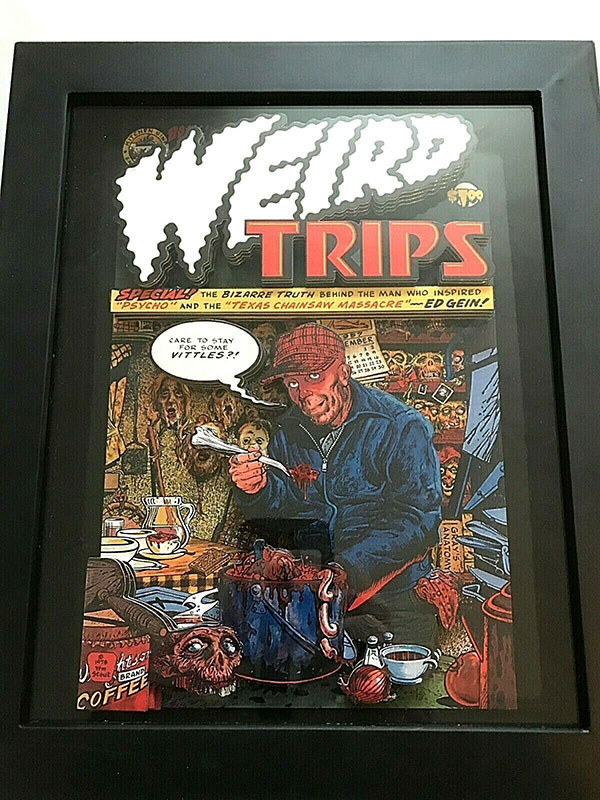 You’ve already seen the grotesque and gorgeous William Stout art from the Weird Trips magazine several times on this list, but this handmade shadow box adds a third dimension to the gore.