Guillotine earrings commemorating the execution of King Louis XVI were a popular accessory during the French Revolution’s Reign of Terror, when beheadings were popular and plentiful. 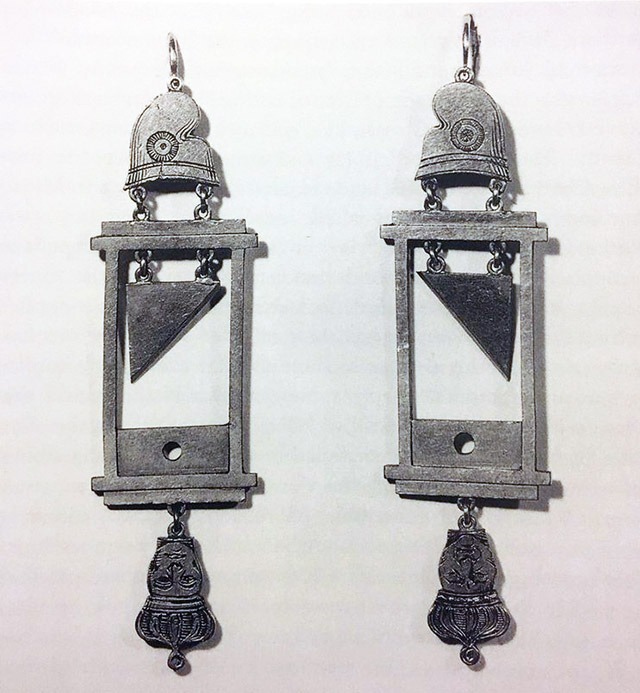 These gilded guillotine earrings from 1793 depict the Phrygian cap – a symbol of liberty – on top, and the crowned, decapitated heads of the king and queen dangling below. With 16,594 executions taking place between June 1793 and July 1794, the guillotine was the emblem of the Reign of Terror during the French Revolution.

It was both metaphorical and literal.

“The guillotine superbly exemplified and epitomized the vital need for rupture, which constituted the condition—and promise—for remaking the world,” Laure Murat writes in The Man Who Thought He Was Napoleon. “As a modern machine derived from the laws of geometry and gravity, it promised an egalitarian, democratic death. It put a permanent end to the hierarchy of punishments under the ancient régime, which sentenced witches and arsonists to be burned at the stake, regicides to be tortured, and thieves and criminals to be hanged, reserving decapitation by the sword for the nobility. It was to do away with this inequality—even in death— that on October 9, 1789, Dr. Joseph-Ignace Guillotin, an elected representative to the Constituent Assembly, suggested a new form of capital punishment that would be identical for all.”

A doctor named Antoine Louis submitted a report detailing how the new “machine of the government” would work.

“France did not invent this method of execution, but it altered the scale of operations, bringing death into the era of technical mass production,” writes Murat. “Other beheading devices had proved their worth in the past, such as the Diele in medieval Germany, the mannaia in sixteenth-century Italy, the ‘maiden’ in Scotland, and the ‘Halifax gibbet’ in England. The French guillotine was nevertheless more efficient than its predecessors, thanks to the development of a swivel board on which the condemned person was bound, the design of a lunette (double-sided yoke) that held the head steady, and finally the use of a diagonal rather than a crescent-shaped blade, which meant that the instrument ‘never failed,’ according to a report submitted on March 7, 1792, by Antoine Louis, its true inventor.”

A Prussian piano maker named Tobias Schmidt was hired to build the device, then nicknamed the Petite Louison or Louisette.

Interestingly, Schmidt’s request for a patent on the invention was denied:

“It is humanly distasteful to grant a patent for an invention of this kind; we have not yet reached such a level of barbarity. While Monsieur Schmidt has produced a useful invention of a lethal kind, since it can be used only for carrying out legal sentences he must offer it to the government.”

This new “machine of the government” was first tested on April 17, 1792 on live sheep and three human corpses.

Of course, it was a success. And just the beginning of the bloodbath. 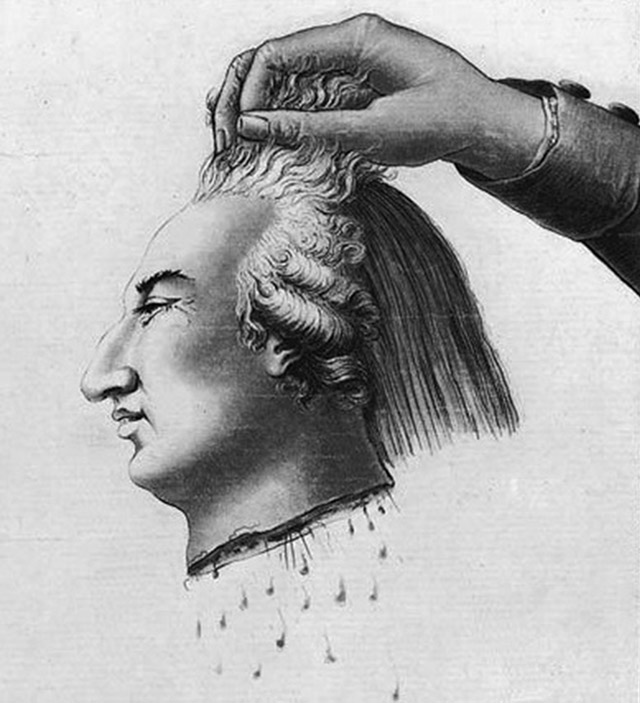 Barbaric or not, people loved the guillotine. When the Reign of Terror began taking heads on an average of 46 per day, including Louis XVI and Marie Antoinette, the terrifying instrument of swift death became part of everyday life. It was the subject of art, music, and fashion.

“It was depicted, recounted, and bandied about by popular songs with their series of refrains on ‘the widow,’ ‘the national razor,’ ‘the patriotic haircut,’ ‘the sword of equality,’ and ‘the altar of the nation,'” says Murat. “People no longer referred to ‘being guillotined’ but spoke of ‘sticking your head through the cat-flap,’ ‘poking through the window,’ or ‘sneezing into the basket.'”

“Like tricolor skirts and nosegays, or jewelry set with chunks from the Bastille,” Jane Merrill and Chris Filstrup write in I Love Those Earrings, “the guillotines testified to a person’s daring (unmistakably they were symbols of castration) and being on the winning side.”

When the Reign of Terror finally came to an end, however, rumors of severed heads blushing and gnashing their teeth caused some to believe consciousness still lingered after decapitation and public opinion of the guillotine began to change.

In the aftermath, “victim’s balls” were held in Paris in which the families of those who met their end on the guillotine gathered in mourning dress with red ribbon tied around their necks.

Traditionally I like a girl in hoop earrings, but these will suffice.

How is this any different to the macabre practice of wearing crucifixes around your neck?
Also, I think the word was “rapture” not “rupture” as written in the article.