The Edmund Fitzgerald sank under mysterious conditions into the depths of Lake Superior in 1975, but the bodies of the crew have never been recovered.

More than 40 years ago, in her 17th year and 40th voyage, the ore freighter SS Edmund Fitzgerald sank in Lake Superior, taking with all 29 members of the crew to the bottom.

Once the longest freighter on the Great Lakes, the 729-foot ship was torn in half during a storm on November 10, 1975 and plunged into the black depths before the crew could escape or send out a distress signal.

What caused the Edmund Fitzgerald to sink is a mystery.

One of the prevailing theories is that it was hit by a series of three consecutive rogue waves, a phenomenon called “three sisters,” which was reported by another nearby ship.

It sank 17 miles from Whitefish Point on Michigan’s Upper Peninsula, an area that has claimed at least 240 ships.

A team found the wreck four days later at a depth of 530 feet using a side scan sonar and other equipment, but they were unable to recover the bodies. 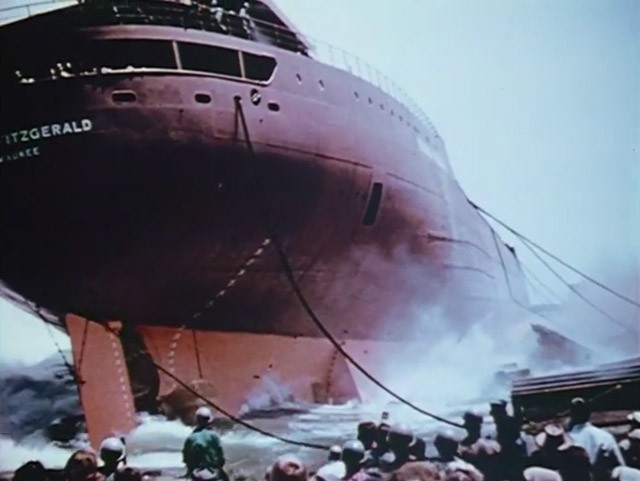 More than 15,000 people attended the June 7, 1958 christening and launch of the Fitzgerald. The sight of the massive ship crashing into the water was so harrowing that one man reportedly died of a heart attack on the spot.

There an 350 shipwrecks in Lake Superior and an estimated 10,000 people have died in the icy waters, but as legend says, Lake Superior never gives up her dead.

Underwater bacteria feed on human remains and create gas which causes bodies to float back to the surface. The average temperature of Lake Superior is about 36°F, cold enough to inhibit bacterial growth and prevent bodies from rising.

In the case of the Edmund Fitzgerald bodies, they all went down with the ship and never came back up.

During a 1994 expedition to the wreck, divers finally found the body of a crewmember for the first time. Video footage shows the remains outside the wreck, near the bow, “fully clothed, wearing an orange life jacket, and lying face down in the sediment.”

They left the remains undisturbed.

Memorials are held annually on November 10 to commemorate the lives lost on the Edmund Fitzgerald and throughout the Great Lakes.

The ship’s bell was recovered from the wreck in 1995. A replica engraved with the names of the lost crew was returned to the ship.

Today, the original bell and other artifacts can be seen on display the Great Lakes Shipwreck Museum in Whitefish Point near Paradise, Michigan, as well as the Dossin Great Lakes Museum in Detroit, and the Steamship Valley Camp museum in Sault Ste. Marie, Michigan. 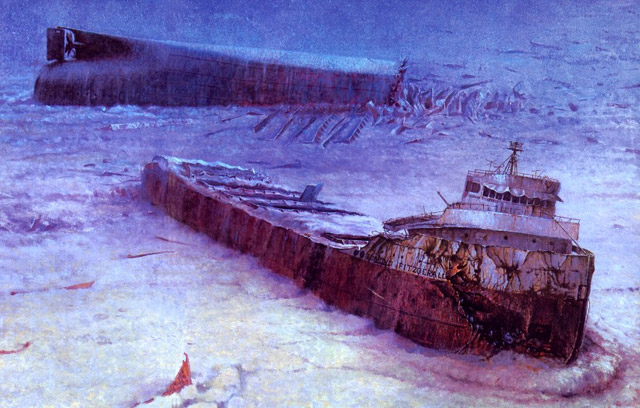 I was in Sault Ont when this happened ,the power was out was a brutal storm that night there .
Was so devastaing at the time ,,it will always be fresh in my memory .
If you know Lake Superior you know what she is capable of .

I’m a bit confused. The article says no remains of the crew were ever recovered but then in 1994 a body was discovered.

This song has always fascinated me. Don’t know if he wrote the lyrics and composed the music but it is fantastic. But for some reason I always thought it was just made up. Never thought it was a real occurrence. I guess the internet is good for something. That is some cold water. I have been on a lake with water temp at 40 deg. F. God rest the souls of the Captain and crew. Does anyone know how to find the ships manifest giving crew and captain names?

1975 side scan sonar was not a common item for coast guard or anyone else to have. It was pretty new technology back then. I lived in that area at the time. Not much money went into water transportation safety.

why did take almost 4 days to set up the side scan sonar?

Is the video supposed to show a body in the bridge? I see nothing. Even searched for a photo of it, see nothing. I read the family was upset because the video showed their dead family member.