The Beatnik Exorcism of Senator Joe McCarthy’s Grave in 1968

In 1968, beatnik poet Allen Ginsberg and members of The Fugs gathered at the grave of Senator Joe McCarthy in Appleton, Wis., to exorcise and purify his spirit. 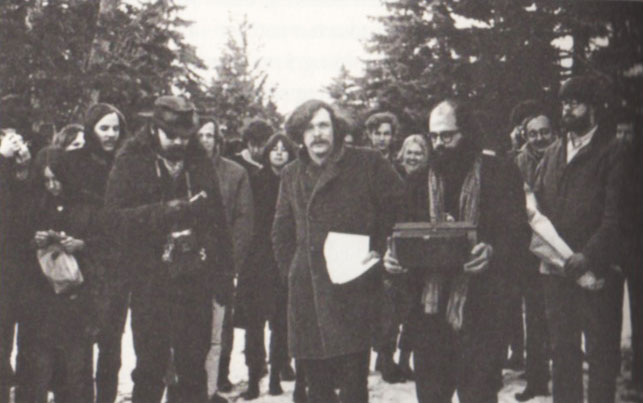 Ed Sanders, Allen Ginsberg, and others exorcise the grave of Joe McCarthy, 1968

US Senator Joseph McCarthy, for whom the term “McCarthyism” was coined, notoriously fueled Cold War tensions in the 1950s with allegations of Communist subversion in America. Armed with a list of names, he claimed Soviet spies and sympathizers had infiltrated the government in droves, along with homosexuals who were, of course, “threats to the American way of life” due to their perceived ties to Communist espionage. Homosexuality was viewed as a mental disorder and many believed, as detailed in the Hoey Report released in 1950, that “sex perverts in Government constitute security risks.”

McCarthy was censured by the Senate in 1954, and he died several years later in 1957. His body was returned to his home state of Wisconsin, where some 17,000 people, three senators, and even Robert F. Kennedy, attended the funeral. McCarthy was interred in the St. Mary’s Parish Cemetery along the Fox River.

A decade later, at the height of the counterculture, the legacy of McCarthy lived on. A politically subversive band called The Fugs found themselves in Appleton on tour in 1968, and decided to put an end to his evil once and for all. 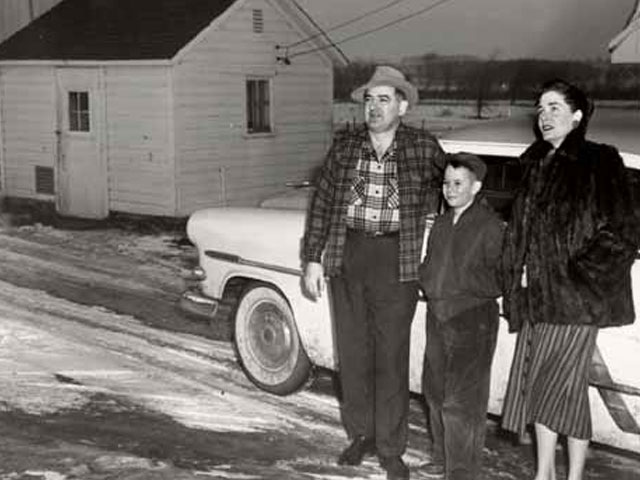 Joe McCarthy and family at the McCarthy farmstead in Little Chute, Wis., February, 1955

Ed Sanders was arrested in 1961 for disrupting the launch of a nuclear submarine in a canoe. There, in his jail cell, he wrote his first notable poem on a piece of toilet paper. The following year he founded Fuck You: A Magazine of the Arts, which was dedicated to “Pacifism, Unilateral Disarmament, National Defense thru Nonviolent Resistence, Multilateral Indiscriminate Apertural Conjugation, Anarchism, World Federalism, Civil Disobedience, Obstructers & Submarine Boarders, and All Those Groped by J. Edgar Hoover in the Silent Halls of Congress.” The magazine included the work of William S. Burroughs, Tuli Kupferberg, Allen Ginsberg, Andy Warhol, and more.

Sanders also opened the Peace Eye Bookstore in Manhattan’s Lower East Side, which was raided by police in 1966 and resulted in obscenity charges.

Sanders, along with his friend Tuli Kupferberg, founded avant-rock group The Fugs in 1964 and were joined by drummer Ken Weaver. They represented peace, sexual freedom, and the psychedelic revolution – everything the government feared. The band is referenced in FBI documents about The Doors, calling The Fugs “vulgar and repulsive,” saying their latest album was the “filthiest and most vulgar thing the human mind could possibly conceive.” The writer, whose name was redacted, believed action needed to be taken to stop the distribution of such “trash.”

The Fugs performed their first exorcism on October 21, 1967. During the March on the Pentagon anti-Vietnam demonstration, The Fugs gathered along with activists Allen Ginsberg, Abbie Hoffman, and Jerry Rubin at the Pentagon, vowing to raise it three hundred feet in the air. In the book Abbie Hoffman: American Rebel author Marty Jezer writes that they viewed an exorcism ritual as “a perfect way of attracting hippies to Washington and transforming the religious mysticism that was an essential part of acid consciousness into the political goal of ending the war.”

The group donned handmade witch costumes, meditating and chanting “In the name of the generative power of Priapus, in the name of the totality, we call upon the demons of the Pentagon to rid themselves of the cancerous tumors of the war generals.”

The Exorcism of Joe McCarthy 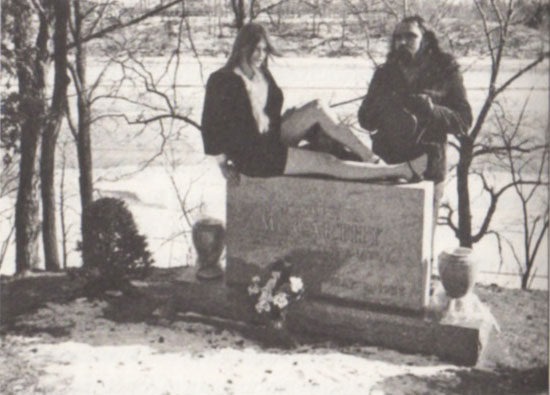 While on tour a few months later, Allen Ginsberg and The Fugs found themselves near the final resting place of Joe McCarthy. They performed at the Cinderella Ballroom in Appleton on the night of February 19, 1968.

The following day they gathered at McCarthy’s grave to summon the dead senator and chastise him for his homophobia, and for the lives and careers his falsehoods ruined. Sanders described the ritual in his 2011 memoir Fug You: “The next morning The Fugs and Ginsberg, plus maybe fifty to seventy-five friends, gathered at Senator McCarthy’s grave on a chilly winter hillock and performed the Exorcism, which enraged right-wing commentators. I chanted a singsong conjuration of deities and power words, similar to what I had done at the Pentagon Exorcism. With Allen commenting on the Great Red-baiter’s homophobia, he led forth with an invocation to bisexual Greek and Indian gods.”

“Allen recited a Hebrew prayer and an invocation to Shiva,” he continued, “and we recited the Prajnaparamita Sutra. Then the entire crowd sang, ‘My Country ‘Tis of Thee’ and a few minutes of ‘Hare Krishna,’ after which I chanted the final words of Plato’s Republic in Greek. A young woman agreed to array herself atop the senator’s stone as an offering.”

When the ritual was finished, everyone was asked to leave a gift on McCarthy’s gravestone. Sanders took note of the offerings, which included “a bottle of Midol, a ticket to the movie The War Game, a Spring Mobilization Against the War leaflet, a stick of English Leather cologne, one stuffed parrot, one candy bar, a ChapStick, one dozen roses, one dozen white geraniums, one dozen yellow geraniums, one ‘Get Fugged’ button, some coins, sugar wafers, coat buttons, and two seeds of marijuana.”

An enraged radio personality in Chicago claimed the group urinated on McCarthy’s grave, but Sanders wrote, “We tried to be dignified and respectful.”

The exorcism was recorded and can be heard in the video below.

I was there, with Bob Martin and maybe Marylynn, all of us from nearby Ripon College, the alleged birthplace of the Republican party. It was my first of many encounters with Allen Ginsberg.