Death became a popular pastime at the Paris Morgue in the late 19th century, where bodies were displayed publicly for identification. 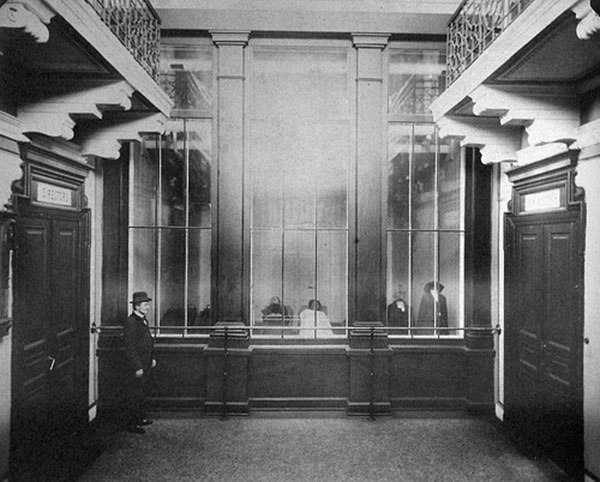 The Paris Morgue, built in 1864, was home to a gruesome spectacle as each morning they displayed bodies of the unknown to the public for identification.

Crowds gathered at the morgue daily to feed their curiosities, gawking at the often times ghastly remains of suicides and murder victims while others searched the slabs for missing loved ones.

An article publish in 1898 in The National Magazine describes the experience:

Each day, from early morning gleam to the evening hour of six, the curious of this earth may be seen going into and coming away from the ugly pile. Persons out of work are impelled by curiosity to go and see the “macchabées,” as the exposed corpses are termed in local slang; but others go to seek on the cold, bare slabs for the body of some dear one who departed this life by suicide or was the victim of an atrocious crime. Over the main door, on the front, one reads the words: “Liberté! Egalité! Fraternité!” Yes, it is indeed that, in this anti-chamber of the eternal naught, which most profoundly verifies the modern formula of our poor humanity. Free, equals, brothers are our corpses when the light of existence has gone out from them.

Between the street door and the thick glass partly dirtied by an undefinable sort of lye, in the large hall, are always some people morgueing at the horrible remains of those who are free from all pain and suffering, and among this throng are some who recognize a friend or relative. But we need not remain with these people, for, armed with a special permit, obtained at the prefecture of police, we penetrate at once into the edifice. Our first feeling is that of cold, the chill of death made more icy by an enormous refrigerator. It is a box three stories In height, and having five compartments on each story.

In this large box icy cold air is produced by means of ammonia; and the pipes are so distributed that while the five lower cases are chilled to a temperature of 15 degrees below zero (centigrade) those of the other stories attain 3 and 7 degrees. As soon as a dead body reaches the morgue it is put naked on a movable iron plank, this is placed on a small chariot, and the corpse never leaves this bed until it starts for the cemetery. Once on this plank the body is washed, examined carefully, and all the details as to its appearance are minutely made note of. Then the small chariot is rolled up to and shut inside one of these fifteen compartments, and not more than five or six minutes have elapsed since the body was stripped until thus refrigerated.

The official in charge opened one of these cases and showed us a corpse that was undergoing the freezing operation be re being placed under the eyes of the public. It was that of a woman, rather small in stature and about 23 years of age. There was not the slightest sign of contraction on the pale countenance, and the corpse had none of that bloated and flabby appearance which the dropping of water from taps above used to give them, nor was the flesh soft and shiny. It was like a wax statue, and seemed as if suddenly and unexpectedly struck by some all powerful hand into glacial rigidity. These remains of a once beautiful young woman had been in the refrigerator for seven hours.

It takes from four to nine hours to thoroughly freeze a corpse; intestines inside the body of a man will be frozen in ten. The official struck the breast of this body with a cane, and it gave forth a sound like unto that produced by hitting a stone block with a stout stick. It Is, thanks to this system of conservatism, that the dead can be kept for weeks without their showing the least signs of decomposition.

We go next into the “Salle des sacs,” or rooms where the clothes of the dead are put in sealed bags, not, however, until ample time has been given to the relatives of the deceased, should any appear, to claim the property if they so desire. If the family does not take possession of the clothes it is supposed they are not wanted, and at the end of two weeks they are thrown into a sac which is sealed up and then put in this room.

When the room becomes crowded these bags are carted to a kiln outside of Paris, where they are burned to ashes. From the “Salle des sacs” we go Into the “chapellerie” or hat room, where upon a score of shelves are displayed a series of headdresses as varied as they are improbable, and which were once worn by all classes of males and females; thence we reach the hall for dissections and autopsies, a kind of amphitheatre with steps or benches rising above each other, with a marble table in the middle, and which is lighted by two wide windows opening on the river Seine behind the bridge of the St. Louis island. The usual instruments, the bottled organs taken from human bodies, the chemicals, etc., found in all arsenals of the dead are plentiful. In this hall a celebrated French surgeon gives weekly lectures during the months of autumn, winter and early spring which are free to everybody. But so small is the room and so numerous are the students who want to attend these lectures that It Is the rule to issue tickets on which the date when the holder may be present is designated, and thus all are in turn enabled to attend. 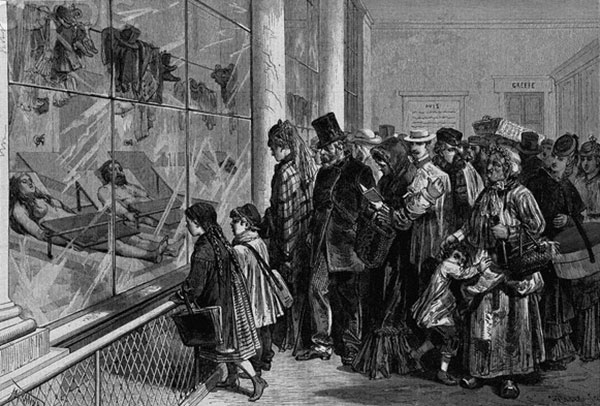 An illustration from the July 18th, 1874 edition of Harper’s Weekly called “The Paris Morgue – The last scene of a tragedy.”

The Paris Morgue was closed to the public in 1907 out of concern for morality.