The Vidstone Video Gravestone Plays a Memorial Video of the Deceased

Created by the “Walt Disney of the Funeral Business,” the Vidstone is a gravestone that memorializes your loved one with an embedded video of the deceased on their headstone.

I’ve been saying for two decades that I want an interactive touchscreen on my gravestone that would allow visitors to browse my websites.

I spend a lot of time in cemeteries tracking down the graves of eccentric historical figures whose lives can be learned if you know where to look. But what about the many other thousands of deceased who lived fascinating lives and would have so many stories to tell?

How can you sum up an entire life into a name, birth date and death date inscribed on a block of granite? There is a person buried beneath that was so much more.

While wandering around an old cemetery recently, searching for the grave of a famous spiritualist, I started considering new ways modern technology would allow friends, family and taphophiles like myself to interact with the dead.

In 2005, entrepreneur Joey Joachim was wondering the same thing. 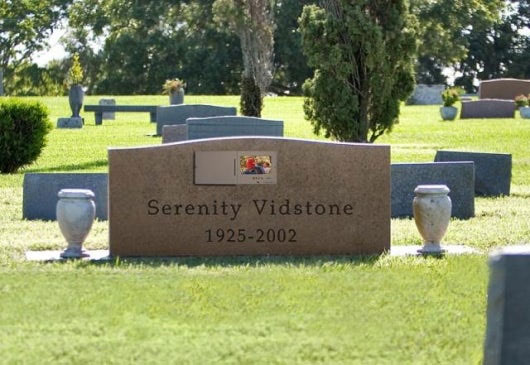 Joachim, the self-proclaimed “Walt Disney of the funeral business,” got his start in the industry when he was hired to build a website for a funeral home in 1999.

For this project, Joachim created what he says was the first online guestbook system, a clear precursor to his future work and all the ways we memorialize the dead online today.

Joachim realized there was a lot of room for improvement in the funeral industry.

He started a company called FuneralOne in 2003 that provided funeral directors with software to easily create video memorials by dropping photos and text into an assortment of predesigned templates to play during visitations.

The next generation of this software was called Life Tributes. Beyond just creating memorial videos, Life Tributes could burn DVDs for guests, create prayer cards and other printed materials, live stream web services for those who could not attend in person, and build memorial websites to live on in perpetuity.

The Vidstone – a headstone with an embedded video screen – was the next logical evolution.

Joachim unveiled it at the annual funeral directors convention in 2005. The solar-powered 7-inch LCD screen “Serenity Panel” could play a memorial video up to 10 minutes in length. It even included an audio jack to plug headphones into.

“What we’re trying to do is create the ultimate funeral experience,” Joachim said.

“Now the Serenity Panel operates using a lithium-ion battery and approximately four hours of direct sunlight is required per day to ensure that the battery remains fully charged,” New Atlas wrote in 2005. “On a full four hour charge, the Serenity Panel plays up to approximately 30 minutes, which allows 3 to 4 viewings of a typical 7 to 10 minute tribute. When the need does arise, the battery can be easily replaced by authorized cemetery personnel. So clearly there’s an opportunity for an upsell for those who figure they’ll be able to pull an audience greater than four a day after they have passed on.

“There might also be those who wish to change their message with the seasons, on anniversaries, birthdays, and at other moments appropriate for the people they wish to communicate with after they have gone. Currently this is a manual process, and tributes on the Serenity Panel can be added or deleted at a customer’s request for a fee. Who knows, there might even be a fully networked service offered at a later date so content can be refreshed and rotated.”

Unfortunately, the idea didn’t quite catch on.

In 2007, the Chicago Tribune ran an article about the Vidstone titled “Electronic tombstone business a little dead right now.”

There were about 100 Vidstone dealers around the country, but they didn’t seem to be finding a lot of interest.

When it comes to death, it seems, most people prefer something more traditional.

“I think the Wausau area is a little more conservative yet,” Ellis said.

“That is a big step, putting electronics on your headstone,” Maria Schlitzberger of the Daughters Monument Co. in Houston said. “People are used to sandblasted, granite and marble and things like that.” 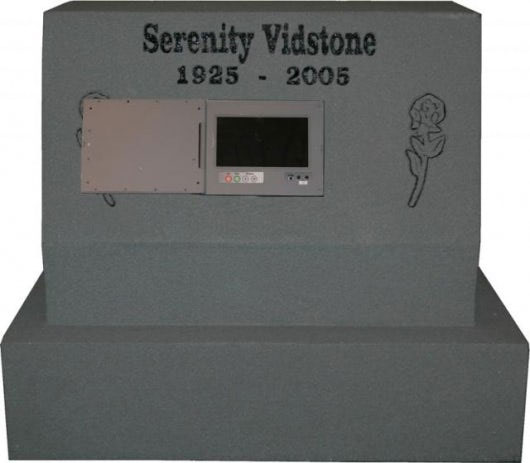 The Vidstone was ahead of its time.

Tech has become a much larger part of our lives since 2005, and we all have to think about our increasingly digital afterlife. Companies offer services that manage access to our social media accounts postmortem, Facebook profiles can be converted to memorials, and we can schedule goodbye posts in the event of an untimely demise.

But what about our physical burial places? Headstones and urns have so much potential.

I was prompted to research the Vidstone (thanks @tweetmare) after a recent tweet about a QR code engraved on someone’s tombstone that, once scanned, took the user to a list of the deceased’s published works.

I've been saying we need something like this for years. Imagining scanning a code and learning all about someone's life. https://t.co/9f5Lm2l51L

Imagine what else we could achieve with wifi-enabled touchscreen devices. You could view a curated selection of the deceased’s best Tiktoks or funniest tweets. See their photos, share your own. Visitors could post videos and messages about the deceased for others to view, moderated by family members through an online interface.

You could even monetize content streams with ads to make them more sustainable. It sounds a little too Philip K. Dick and Paul Verhoeven, but what if you could fund grounds maintenance and device upgrades through a worldwide network of contextually relevant gravestone commercials?

That’s it, I’m starting a cemetery. Who wants in? 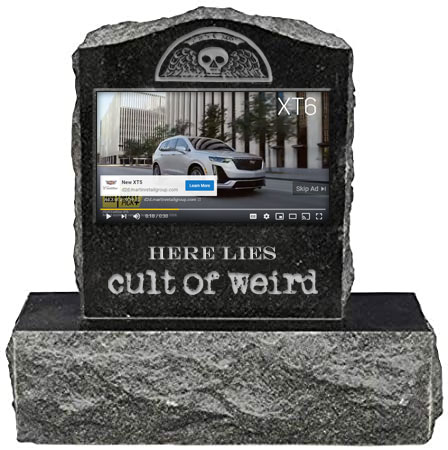 There must be a few Vidstones in the wild. If you happen to find one, I’d love to see it.

Hello
Is this option available in New Zealand…

More Stories from the Grave