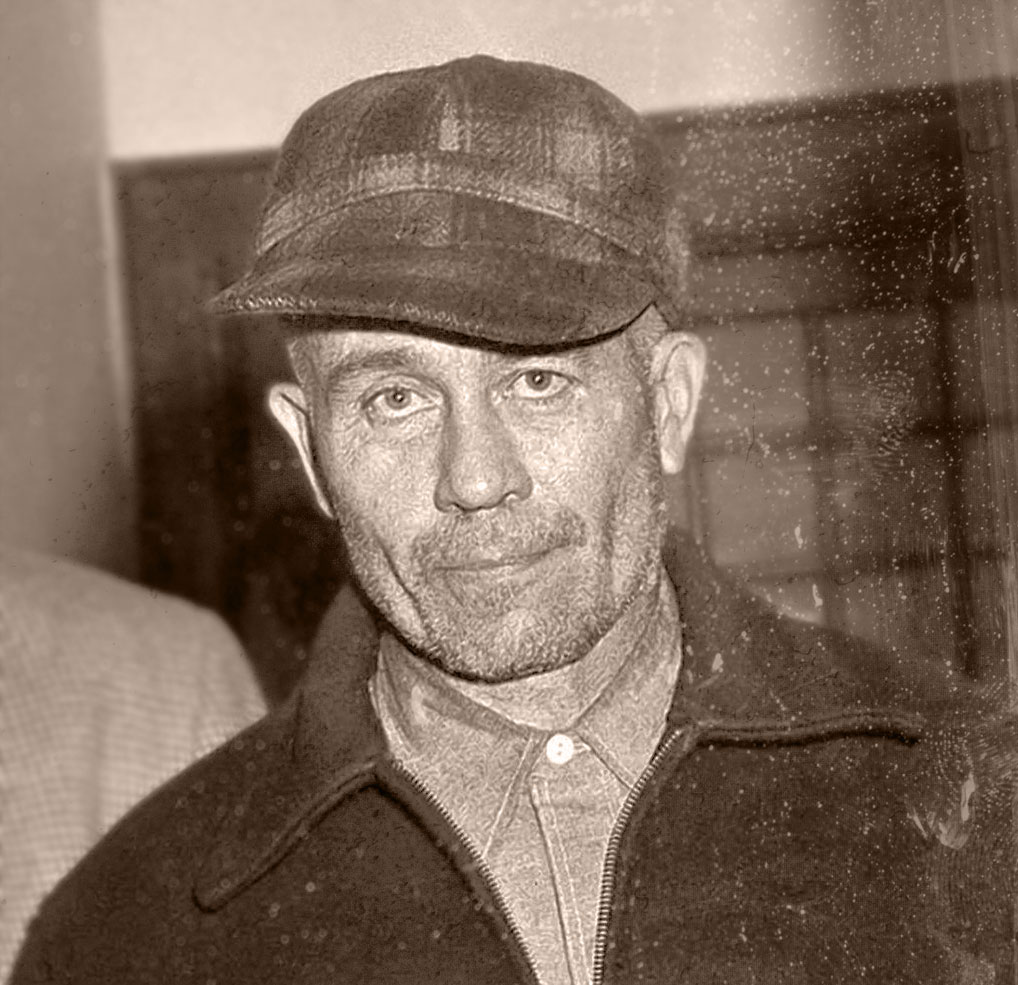 Edward Gein (1906-1984) was arrested on November 16, 1957 when the disemboweled and decapitated body of a local hardware store owner who went missing that morning was found hanging upside down in his dilapidated farmhouse in Plainfield, Wisconsin. Investigators later discovered the remains of an unknown number of victims scattered throughout the house. For years, Gein had been exhuming freshly buried bodies from local cemeteries and using pieces of them to make things like chair upholstery, lampshades, and a female skin mask and “mammary suit” that he would wear.

The gruesome crimes shocked the world and went on to inspire Psycho, The Texas Chainsaw Massacre, The Silence of the Lambs, American Horror Story and countless other movies, songs and fictional serial killers.

Cult of Weird headquarters is located in Wisconsin deep inside Gein country. We have been visiting Plainfield, collecting stories, photographing locations, and exhuming original research into the life and continuing legacy of Ed Gein for years.

Do you have a personal Ed Gein story or experience? New research into the mysteries that still surround the case? Do you collect Ed Gein memorabilia? Have you found Ed Gein’s long missing car? Tell us about it! 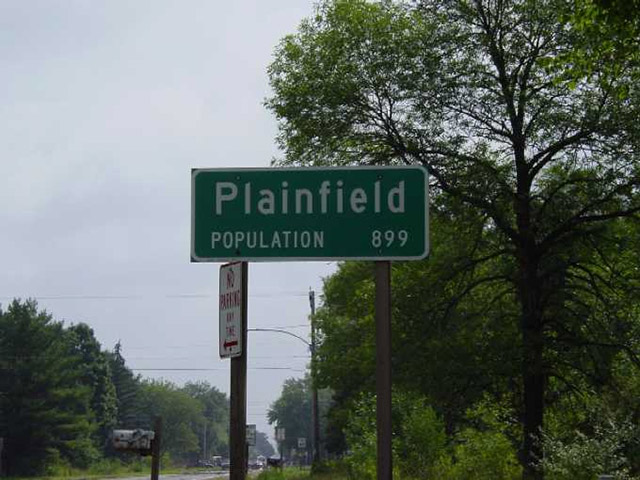 Things to do in Plainfield

Take the Ed Gein tour and walk the same ground Gein did. See where he lived, where he murdered, where he is buried in Plainfield Cemetery. Visit the empty graves where he dug up the occupants in the night and took them back to his farmhouse.

Go inside the mind of the Plainfield Ghoul with author Frank Ladd.

In 2015, an unusual item hit the auction block in Wisconsin: A haunted cauldron owned by Ed Gein. The seller claimed that it had been used by Gein as a receptacle to hold human remains. The winning bid was placed by Zak Bagans of the Travel Channel series Ghost Adventures. The cauldron made it’s television debut the following year, and can be seen now on display at Bagans’ Haunted Museum in Las Vegas.

After his death in 1984, Ed Gein was buried in the family plot in Plainfield Cemetery. Today, his grave is unmarked.

What Happened to Ed Gein’s Gravestone 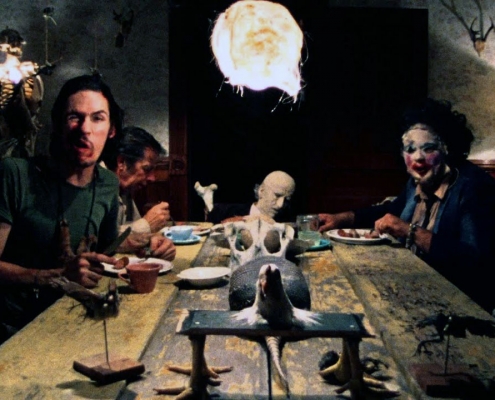 The 1974 horror film The Texas Chainsaw Massacre, with it’s chainsaw-weilding killer Leatherface, who wears the skin of his victims as a mask, was famously inspired by the crimes of Ed Gein. Director Tobe Hooper, a Texas native, was just 14 when Ed Gein was arrested. Hooper’s aunt in Wisconsin called him to share the details of the gruesome finds inside Gein’s house, some of which he worked into Leatherface and the Sawyer family years later when he made the film. 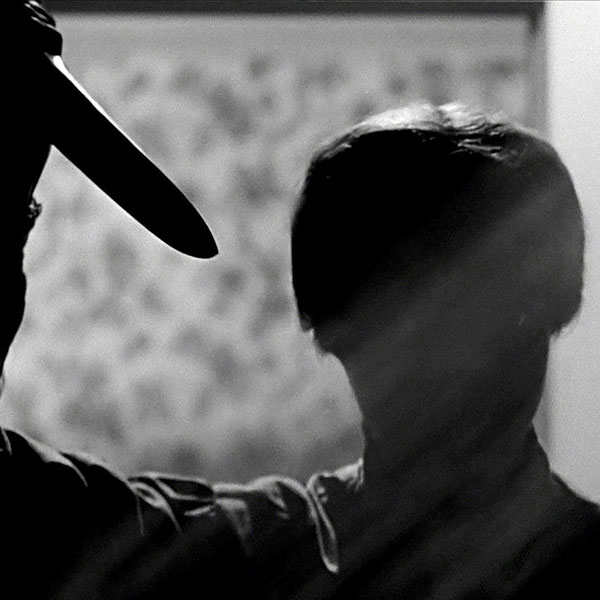 Alfred Hitchcock’s classic about the Bates Motel was based on the novel by Robert Bloch, who was living in Wisconsin in 1957 when the gruesome crimes in Plainfield were uncovered. 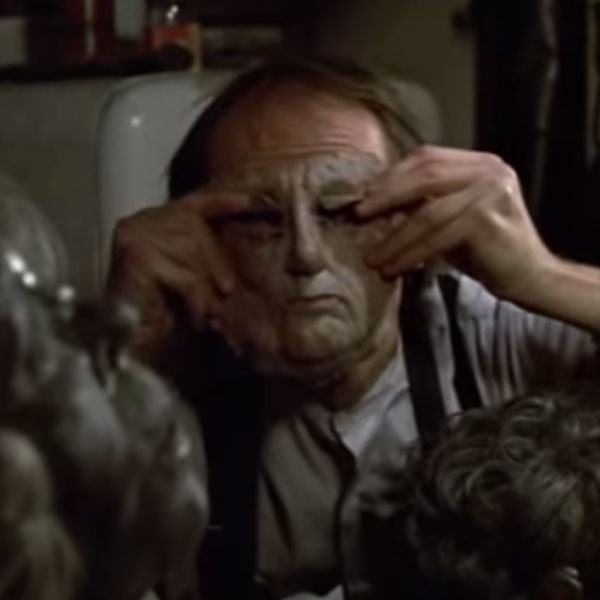 This horror retelling of Gein’s crimes was long considered the most accurate depiction of the killer’s life put to film. 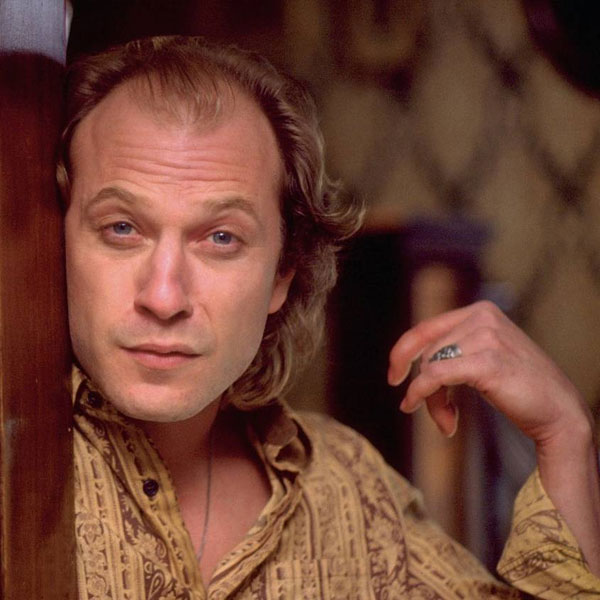 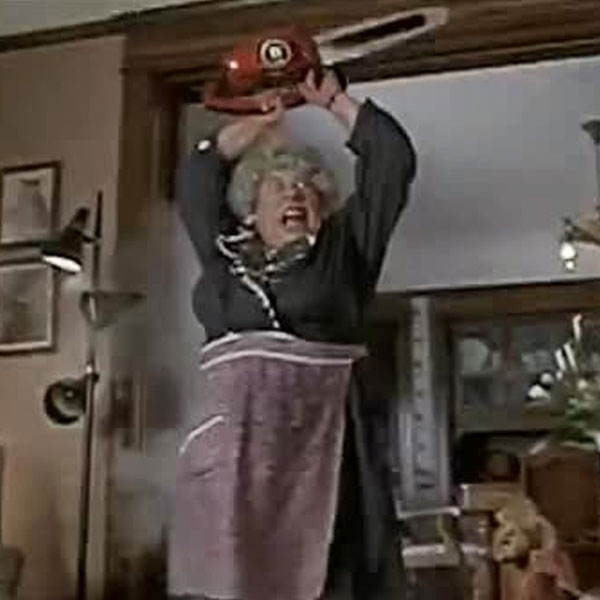 When Ed’s beloved mother dies and leaves him in charge of the hardware store, he jumps at an offer to bring her back from the grave.

The most commonly asked question about the life and crimes of Ed Gein. Have a question? Send a message.

What is Ed Gein known for?

The notorious “Butcher of Plainfield” robbed graves and murdered two women around his home town of Plainfield, Wisconsin. Living alone in his decrepit farmhouse after his mother died, Edward Gein used the body parts to create a variety of objects and furniture, including a skull bowl, a nipple belt, a lampshade made of human skin, and a “mammary suit” which he dressed up in to appear like a woman. His final victim was Plainfield hardware store owner Bernice Worden, whom authorities found hanging upside down, gutted and decapitated, in Gein’s old farmhouse on November 16, 1957.

While there have been numerous serial killers from Wisconsin, the particularly deranged nature of ol’ Eddie’s crimes and human art have made him the most notorious worldwide. Locally, he’s become something of a boogeyman in the 60+ years since the crime scene in his house was discovered. Everyone has a story about being babysat by Gein as a child or eating his jerky.

When he died in 1984, Gein was buried in Plainfield Cemetery in the family plot beside his brother and mother, surrounded by the same graves he looted for his grotesque craft projects.

In 2015, a cauldron owned by Ed Gein was bought by Ghost Adventures star Zak Bagans for display in his Haunted Museum.

Where was Ed Gein born?

Edward Theodore Gein was born on August 27, 1906 in La Crosse, Wisconsin where his family owned a grocery store.

Where is Ed Gein’s House Located?

The Gein farm is located a few miles outside of Plainfield, WI on the corner of 2nd Ave and Archer Ave. The land where the house once stood is private property. 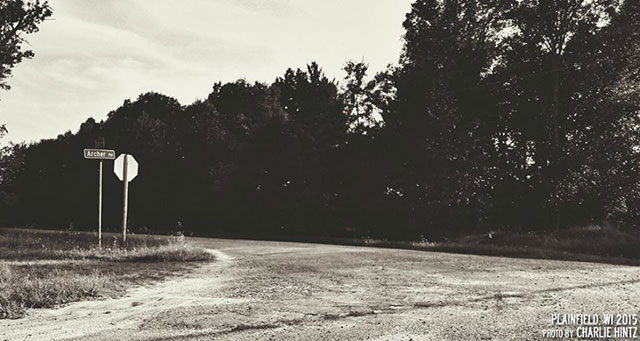 Is Ed Gein’s house still there?

No, none of the buildings that once stood on the Gein family farm remain. The house mysteriously burned down in the early morning of March 20th, 1958. The property and all of Gein’s possessions were auctioned off soon after. It was suspected that locals burned the house down to prevent it from being turned into a tourist attraction rumored to be called the “House of Horrors.”

At the March 30th auction, a man named Emden Schey bought the 155-acre property for $4,658. Over the years he tore down the outbuildings, planted trees, and eventually sold off most of the land. The 40-acre homestead site, however, remained in the family. Schey passed it down to his grandson, Mike Fischer.

The foundation of the house and other items may still exist beneath decades of dirt. The land is private property, however, and trespassing is not tolerated.

Where is Ed Gein’s grave?

After his death in 1984, he was buried in Plainfield Cemetery beside his mother Augusta, brother Henry, and father George. The family plot is just feet away from a now empty grave that Gein robbed.

It was rumored that he had been buried at midnight to avoid media coverage, but Betty Petrusky, who served as the Plainfield Cemetery caretaker for 30 years, told the Milwaukee Journal Sentinel that was not accurate.

“That wasn’t true because I buried him,” Petrusky said. “It was 4 in the afternoon.”

Where is Ed Gein’s gravestone?

The gravestone, which had been defaced and vandalized over the years, was stolen from Plainfield Cemetery in 2000. It was found in Seattle the following year in the possession of Shane Bugbee, founder of the Ed Gein Fan Club.

How did Ed Gein die?

Ed died at the age of 77 of respiratory failure due to lung cancer at the Mendota Mental Health Institute in Madison, WI on July 26, 1984.

Was Ed Gein a grave robber?

Soon after the death of his mother Augusta in 1945, Ed began digging up graves in three nearby cemeteries (Plainfield Cemetery, Spiritland Cemetery, and Hancock Cemetery) to exhume the freshly buried remains of middle-aged women who reminded him of her.

He used the remains to fashion furniture and clothing which he was at least partly inspired to create by the pulp magazines about cannibals, headhunters, and Nazi atrocities that he enjoyed reading.

After his arrest, he admitted to as many as 40 visits to local cemeteries to rob graves between 1947 and 1952, most of which he left intact as he said he came out of his “daze-like” state and returned home.

Gein confessed to having robbed 9 graves total. He lead investigators to the those graves, and three were opened to confirm the claims. They were found disturbed or completely empty exactly as he described.

There were rumors that he had help from another local man to dig up the graves, but that has never been substantiated.

Where did Ed Gein kill?

Ed committed all of his confirmed crimes in and around Plainfield, Wisconsin. He killed Mary Hogan on the night of December 8th, 1954 in her bar just a few miles from Plainfield in the town of Bancroft. He killed Bernice Worden on November 16th, 1957 in the Plainfield hardware store she owned.

How many people did Ed Gein kill?

Ed admitted to killing just two people: Mary Hogan and Bernice Worden. He was tried and convicted only for the Worden murder. However, he is suspected of murdering his brother Henry, and may be responsible for the disappearances of two hunters who vanished near his property, and well as several missing girls who’s remains may be among those that were found in Gein’s home that were never identified.

Where is Ed Gein’s car now?

Ed’s maroon 1949 Ford sedan was bought from the auction in 1958 by a carnival sideshow operator from Rockford, Illinois named Bunny Gibbons. Up against 14 other bids, Gibbons won the car for $760. Gein had used the car to transport the bodies of his victims, as well as the remains he exhumed from the grave. Gibbons immediately saw the opportunity to make money from the macabre curiosity Gein’s recently revealed crimes generated.

Gibbons put mannequins in the car to represent Gein and his final victim, Bernice Worden, and exhibited it at county fairs around the state that summer as “Ed Gein’s Ghoul Car.”

Anyone could get a look at the car that “hauled the dead from their graves” for 25 cents. It made its first appearance at the Outagamie County Fair in Seymour, WI in July 1958. Over the course of three days, some 2,000 visitors parted with their quarters for a glimpse inside the tent. The exhibit caused considerable controversy, as many were unhappy with Gibbon’s exploitation of such a horrible crime.

The car made it’s final recorded appearance in Slinger, WI, where the local sheriff shut down the exhibit. It was then banned entirely by the state, and Gibbons returned home to Illinois defeated. He and the car faded into obscurity. What became of Gein’s old Ford after that is unknown. 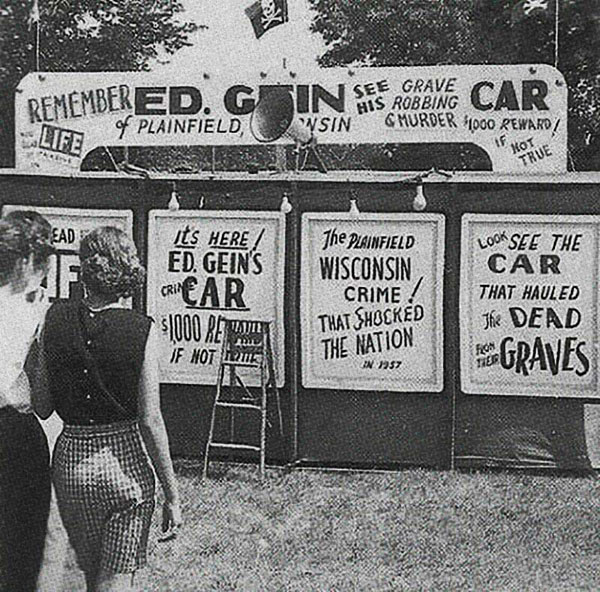 Ed Gein on Cult of Weird 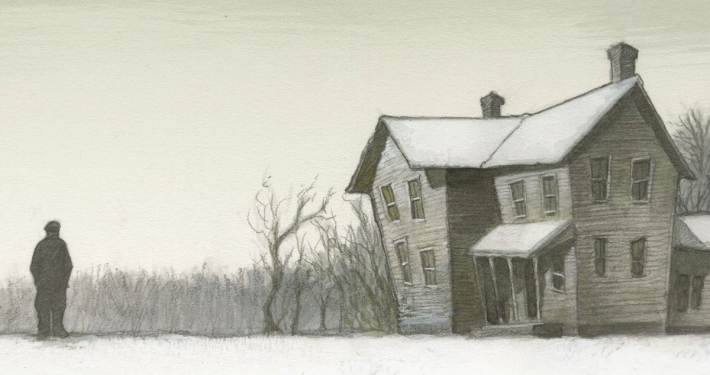 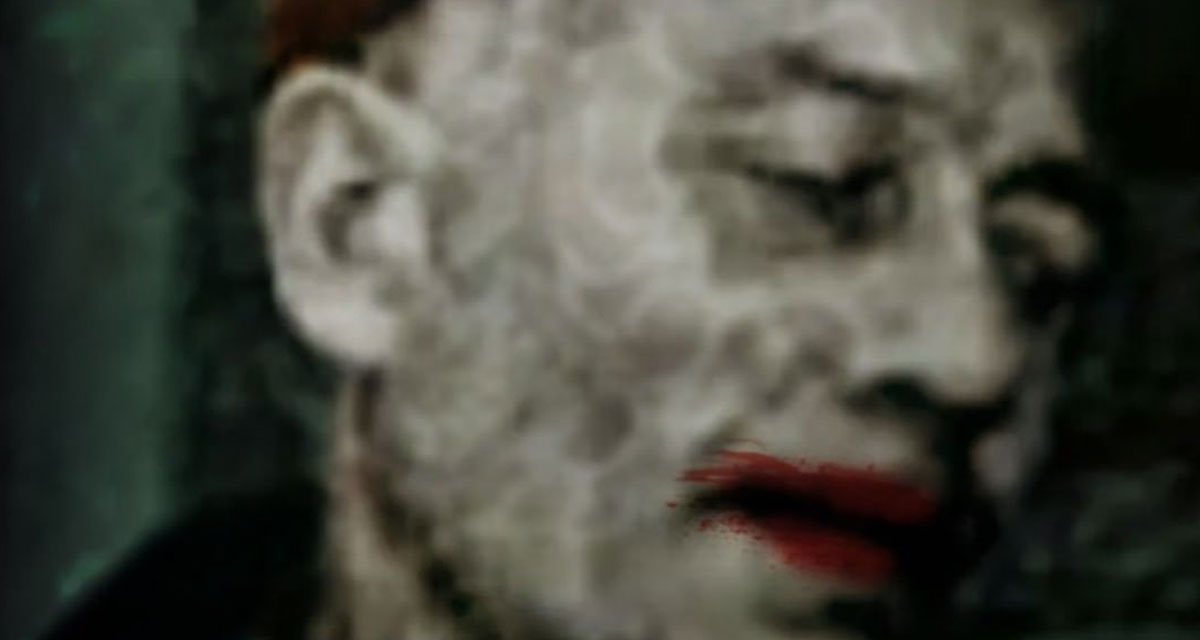 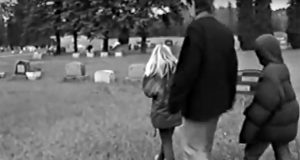 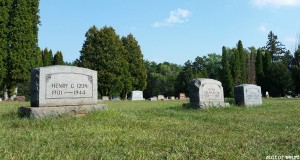 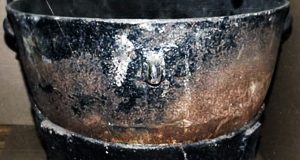 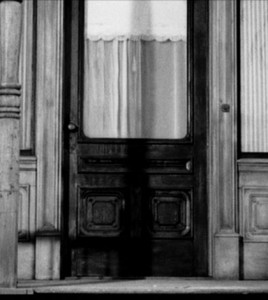 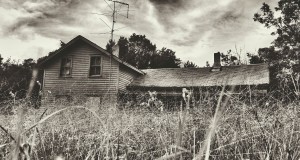 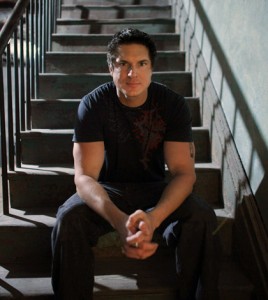 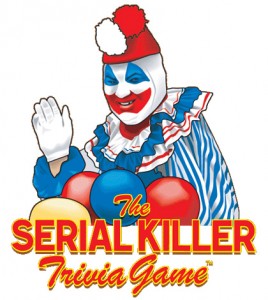