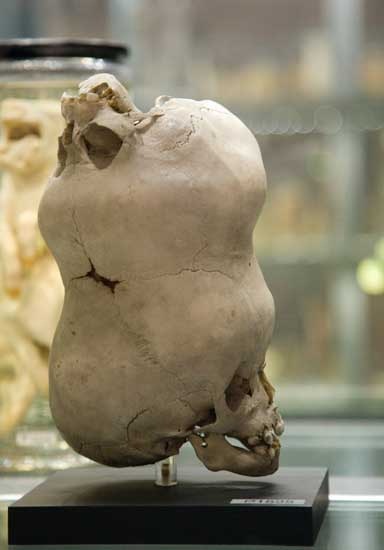 The Two-headed boy from Bengal was born in May 1783 in the village of Mundul Gait. Though first rejected and thrown into a fire by his mother, his parents soon realized they could make money from the boy’s deformity. He spent four years as an anthropological freak, arousing pity and fear from families and servants of the privileged class until succumbing to a cobra bite.

Refusing to let British representatives of scientific enlightenment perform an autopsy on the boy, the parents used their savings to give him a decent burial outside the town of Tamluk.

But Mr. Dent, an agent for the East India Company, plundered the grave, dissected the corpse and gave the head to a colleague who was about to sail for Europe. The skull was in the possession of distinguished scientist and surgeon John Hunter, and eventually ended up among the bizarre specimens and medical anomalies of the Hunterian Museum.

In life, both heads could act independently of each other, though only the primary one could talk. It was established through examination that the boy possessed two complete brains.

Perhaps the other head was his twin? Maybe it had it’s own feelings and thoughts

Poor child/ren. What a horrible and tragic life they must have led.