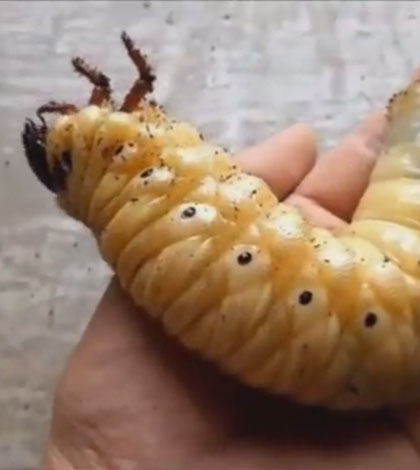 Watch the metamorphosis of a Dynastes hercules from larva to adult rhinoceros beetle.

The Hercules beetle (Dynastes hercules, Dynastinae) is a rhinoceros beetle native to the rainforests of Central America, South America, Lesser Antilles, and the Andes. They are large beetles, with some males reaching 17.5 cm including the horn, and a slightly iridescent coloration to their elytra, which also vary in color from beetle to beetle, and even depending on the humidity. Dynastes hercules is highly sexually dimorphic, with only males exhibiting the characteristic horn. Several subspecies have been named, though there is still some uncertainty as to the validity of the named taxa. Reports suggest the Hercules beetle is able to carry up to 850 times its body mass but actual measurements on a much smaller (and relatively stronger: see square-cube law) species of rhinoceros beetle shows a carrying capacity only up to 100 times their body mass, at which point they can barely move.

The larval stage of the Hercules beetle will last one to two years, with the larva growing up to 4.5 inches (11 cm) in length and weighing more than 100 grams. Much of the life of the larva is spent tunneling through rotting wood. After the larval period, transformation into a pupa, and moulting, the beetle then emerges as an adult.

The larval stage of the Hercules beetle will feed on rotting wood during this two year stage.The adult Hercules beetle feeds on fresh and rotting fruit. They have been observed feeding on peaches, pear, apple, and grapes within captivity. 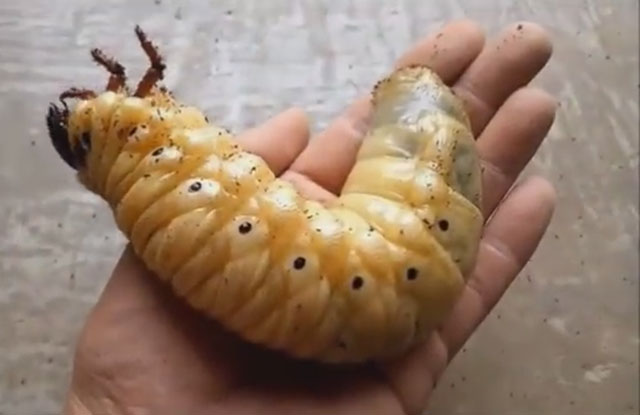 Do native people eat the larva? I mean just 1 or 2 could be an entire days worth of food if your starving…