You can buy the ruins of Boleskine House, where “the wickedest man in the world” carried out black magic rituals for years. 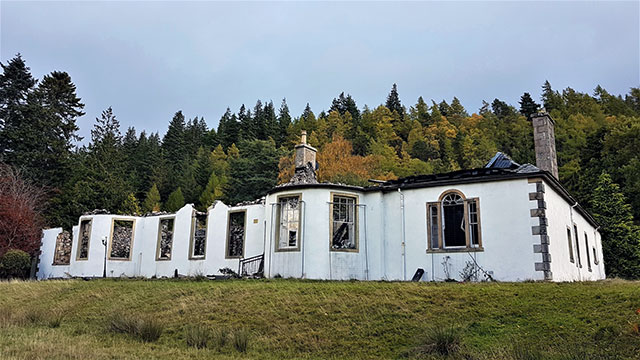 The ruins of Boleskine House. Photo by Mark Wallbank

The BBC reports that Boleskine House, former home of occultist Aleister Crowley, and later owned by Led Zeppelin guitarist Jimmy Page, is for sale. After a fire tore through the manor in 2015, though, there isn’t much left.

UPDATE: Pieces of Boleskine for sale on eBay

“The selling agent Galbraiths said echoes of its former splendour are all that remain of Boleskine House,” the BBC article says, “but added that there is an opportunity to restore it into an outstanding property.”

Aleister Crowley purchased Boleskine for the purpose of conducting a ritual that required very specific architecture. “The first essential is a house in a more or less secluded situation,” Crowley explained. “There should be a door opening to the north from the room of which you make your oratory. Outside this door, you construct a terrace covered with fine river sand. This ends in a ‘lodge’ where the spirits may congregate.”

Boleskine was the perfect location.

“The demons and evil forces had congregated round me so thickly that they were shutting off the light,” Crowley wrote of his experiments there. “It was a comforting situation. There could be no more doubt of the efficiency of the operation.” 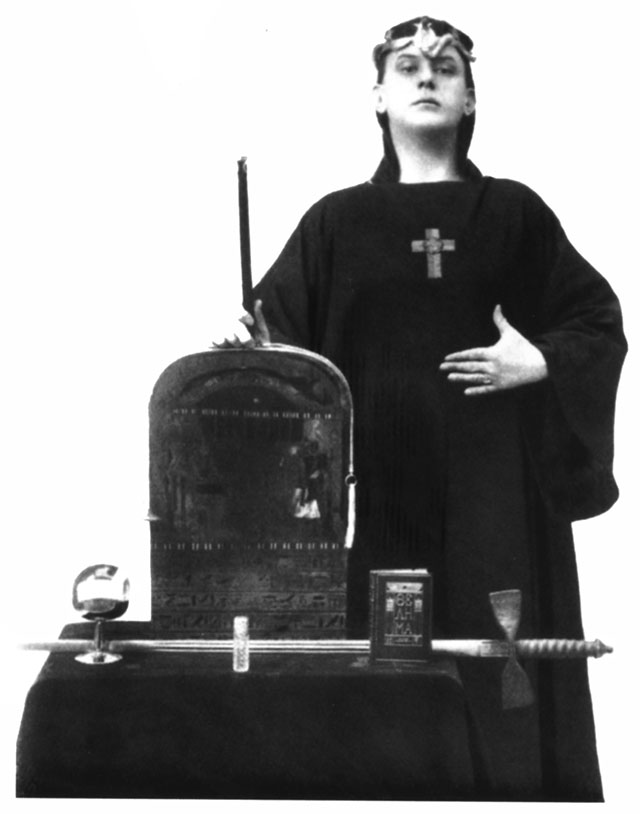 “At Boleskine, Crowley was said to have summoned 115 spirits, including Lucifer,” the BBC wrote in an article about a film crew who experienced unexplained phenomena there while filming a documentary about Crowley. “The occultist also embarked on a complicated, six-month ‘power-giving’ black magic ceremony called Abra Melin. But he was interrupted in the middle of the ritual by his grand master, the head of the Golden Dawn, who called him to Paris. It is claimed Crowley didn’t have time to banish the spirits he brought to Boleskine.”

“The Rites of Abramelin the Mage require prior months of preparation, celibacy and abstinence from alcohol and include, among much else, ‘the summoning of the 12 Kings and Dukes of Hell,’ the Scottish Daily Mail wrote. “Crowley’s subsequent orgiastic ceremonies and ‘sacraments’ are too disgusting to detail in a family newspaper. But, fatefully, he was interrupted. Amidst all his chanting, sodomy and the sacrifice of terrified cats and goats, the sorcerer was called away to Paris – and Boleskine folk believe he never got round to banishing the dreadful forces he had summoned to the house.”

While Crowley’s activities certainly didn’t help, Boleskine already had a bizarre reputation long before the “Great Beast” conducted his rituals there.

The Boleskine Kirk once stood on the shady shore of Scotland’s Loch Ness where the manor is now. If the land is cursed, it may have begun with the church.

According to historical writings, an early minister of the parish had to fend off a pesky wizard who was reanimating the dead. 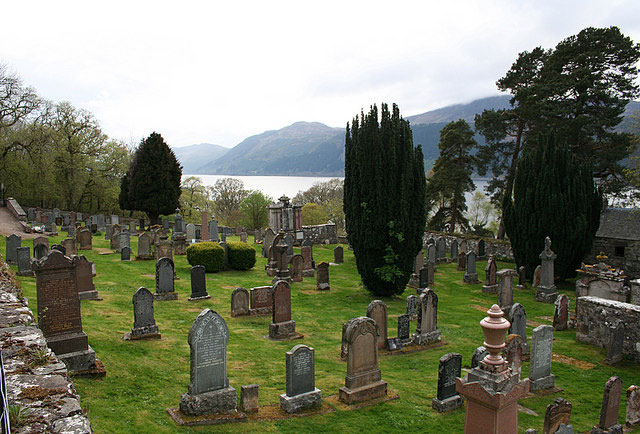 In An Account of the Kirk of Boleskine, Alan Dawson wrote that “Thomas Houston (1648 -1705)
was noted as having to contend with a notorious wizard – AN CRUINAIR FRISEAL (the Fraser Crowner or maker of circles, as wizards do) who had raised the bodies in the churchyard and Thomas had to make haste to lay them to rest again.”

Sometime later the church is said to have burned to the ground during a sermon, killing everyone inside.

When a bishop visited the old kirk in 1762, he wrote that it was “the poorest edifice of any kind I ever
looked upon as is also the Manse. The Church-yard is quite open without any walls where you see plenty of human bones above ground and the Floor of the Kirk is overspread with them…..Dogs are seen carrying away the human bones in their teeth.

Soon after, Colonel Archibald Fraser built Boleskine House on the charred remains of the church.

“Colonel Fraser was a firm Jacobite,” The Scottish Daily Mail wrote, “but all the land surrounding his pocket had belonged to Simon Fraser, the 11th Lord Lovat, who flip-flopped once too often on the Stuart cause and (after the failure of the ’45) was the last person in Britain to be executed by beheading. Boleskine House, then, was the equivalent of two jabbed fingers at the lake Lovat.”

The house remained in the Fraser family until 1899 when they sold it to then 23-year-old Aleister Crowley. Several tragedies took place during his time there.

“The black magician also took pleasure in the suffering that his sinister practices apparently brought to local villagers,” The Guardian wrote when a piece of the land was put up for sale in 2009. “He bragged about how an employee of the Boleskine estate got drunk one night – after 20 years of abstinence – and attempted to kill his wife and children. The family of Crowley’s lodge keeper, Hugh Gillies, also suffered a series of tragedies. First his 10-year-old daughter died suddenly at her school desk and a year later his 15-month-old son died of convulsions on his mother’s knee.” 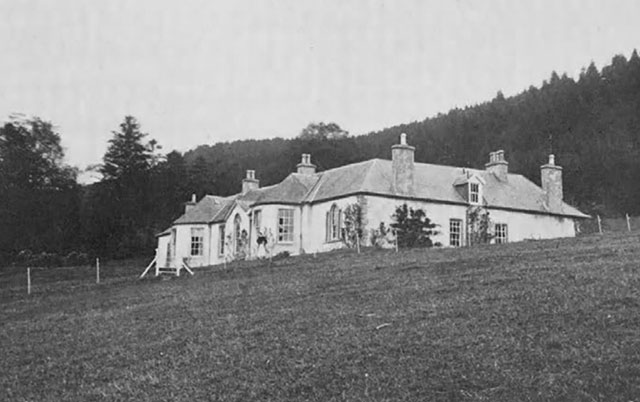 In 1960, then owner Major Edward Grant killed himself with a shotgun in Crowley’s former bedroom. The housekeeper, 78-year-old Anna MacLaren, had a premonition of the suicide. She had been alone picking vegetables in the garden when she heard a gunshot from the house. She went into the house, but there was no one there. Seven days later, though, at about the same time of day, she found her boss dead.

“I went in and found him with most of his head blown off,” she recalled. “The family dog was playing with a bone. Police told me later the bone was part of the major’s skull.”

A young couple later moved in. The wife was blind, and within a few months her husband abandoned her there.

Filmmaker Kenneth Anger spent the summer of 1969 in the house. During that time he witnessed a heavy painting float off the wall and come to rest on the floor. 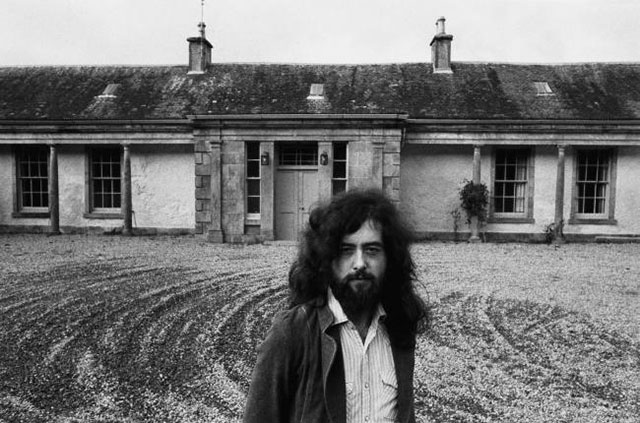 Jimmy Page at Boleskine House in 1973

In a January 1975 Rolling Stone interview, the interviewer said, “You live in Aleister Crowley’s home. Crowley was a poet and magician at the turn of the century and was notorious for his black magic rites.”

Page was fascinated by Crowley, but he was interested in the house for the rest of its history, as well.

“Strange things have happened in that house that had nothing to do with Crowley,” Page responded in the interview. “The bad vibes were already there.”

Page, who spent no more than 6 weeks at Boleskine in the 20 years he owned it, asked his childhood friend Malcolm Dent to move in and restore it.

“Jimmy Page caught me at a time in my life when I wasn’t doing a great deal and asked me to come up and run the place,” Dent told the Inverness Courier in 2006. “I never did establish why he fixed on me.”

Dent lived at Boleskine for a long time and raised his family there.

“All the main rooms look out across the loch and you’re 300 feet up so you have some dramatic views,” he said. “We loved living there. It was a great house to raise children in and they loved it there, in spite of its history and in spite of the peculiar happenings that went on there.”

Dent knew nothing of Boleskine’s history or Crowley when he moved in.

“I arrived a total skeptic, to a degree I still am, but there are things at the house you can’t explain,” he said. 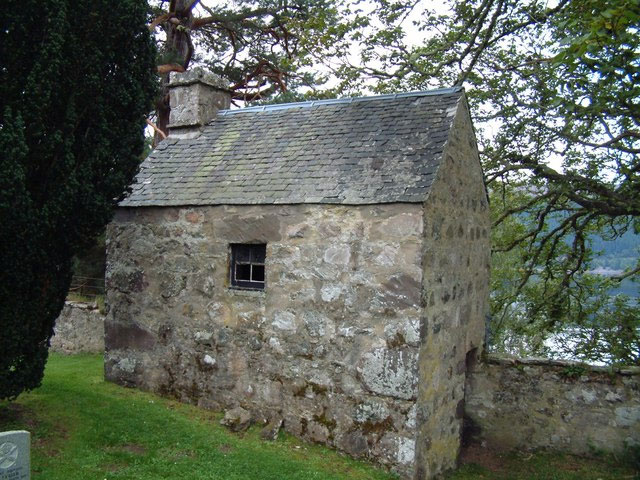 Mortuary house in the Boleskine cemetery

“A girl who stayed for the night awoke screaming that she had been attacked ‘by some kind of devil,'” the Scottish Daily Mail writes. “Another night, Dent was roused by what sounded like a wild animal clawing and snorting by his bedroom door: he dared not open it till daybreak. There was nothing there, ‘but whatever was there was pure evil.'”

Doors would suddenly spring open as if someone was running through them, and slam in the middle of the night, and rugs would be found piled up the following morning.

“We just used to say that was Aleister doing his thing,” Dent said.

“One of the most famous stories is that the head of Simon Lord Lovat, beheaded for treason following the 1745 Jacobite rebellion, can be heard rolling around the floor at Boleskine,” the Inverness Courier wrote, “even though the house dates only from the 1760s.”

“At the time of his death, he was supposedly casting his mind back to the heart of the Highlands,” Dent explained. “Just above us is Errogie, which is the geographical centre of the Highlands, and the nearest consecrated ground is Boleskine.”

Another story that Dent says everyone loves involves seven chairs Page bought from the Cafe Royal in London.

“Jimmy got those chairs specifically because one of them had Aleister Crowley’s name on it,” Dent said. “Each of the chairs belonged to a famous person and had a nameplate on the back and front – Marie Lloyd, Billy Butlin, James Agate, Ruldolph Valentino, William Orpen and Jacob Epstein.”

Dent says Crowley’s chair was always placed at the head of the table. But, after the chairs underwent repairs, they kept finding Crowley’s chair switched with Marie Lloyd’s.

“The kids couldn’t have done it and we didn’t know why this was happening,” Dent said. “Then I realized the guy who did the repairs didn’t know which plaque went with which chair and hadn’t put them back on the right ones.”

But, according to Dent, the strangest thing about the house may have been its visitors.

“I had them from every corner of the world,” he said. “A lot of them were nutters. A lot of them were downright dangerous lunatics. They will still be turning up today. The house is on the map as an occult centre and you’re not going to get rid of Crowley’s legacy that easily.”

Jimmy Page sold Boleskine to Ronald and Annette MacGillivray in 1992. The couple turned it into a guest house. They despised any mention of Crowley, and insisted nothing unusual ever happened there. Locals say the MacGillivrays tried to erase Crowley’s presence, whitewashing the interior and covering the stone floor with carpet to hide the magical symbols painted there. Their efforts failed several times, villagers claimed, alleging the symbols would reappear as the paint dried.

While filming a 2000 BBC documentary called The Other Loch Ness Monster, a priest and minister blessed the project, and clerics were called in to keep the crew safe…just in case. Still, they experienced their share of unexplained happenings.

“The film crew working on the BBC documentary were attacked by a plague of beetles, suffered repeated equipment failures and experienced strangely similar nightmares about Crowley,” the Sunday Mail wrote.

Photos taken at the graveyard just down the hill (where a rumored tunnel from the house was said to lead) were ruined by “a strange circular halo of fog” according to producer Garry Grant. “It wasn’t lens flare or a fault in the camera,” he said. “I’d never seen anything like it before.”

In another incident, lights exploded, fuses burned out and camera stands fell over during a late-night shoot in the graveyard, showering the crew in glass. One crew member’s phone kept ringing intermittently, while another’s alarm clock would go off at the same time every day.

The MacGillivrays sold Boleskine in 2002 to new Dutch owners who used it as a vacation home. They were not there on December 23, 2015 when a fire scorched Boleskine, leaving nothing but the external walls by the time firefighters arrived. They determined the fire began in the kitchen, but the cause was never identified. 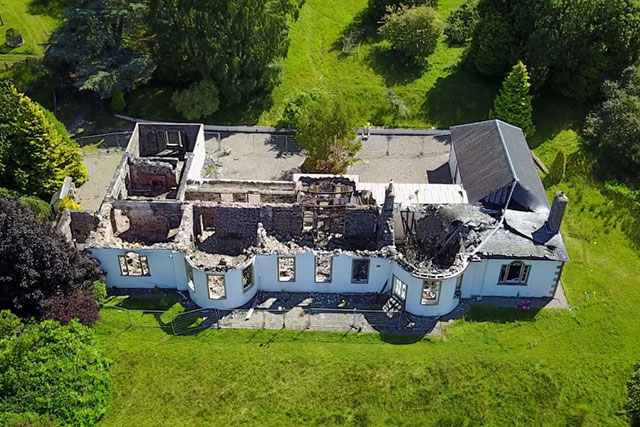 Today, the burned out ruins are all that remain of Boleskine House. The shell of Aleister Crowley’s unholy home and nearly 23 acres of cursed land on Loch Ness can be yours for £510,000. 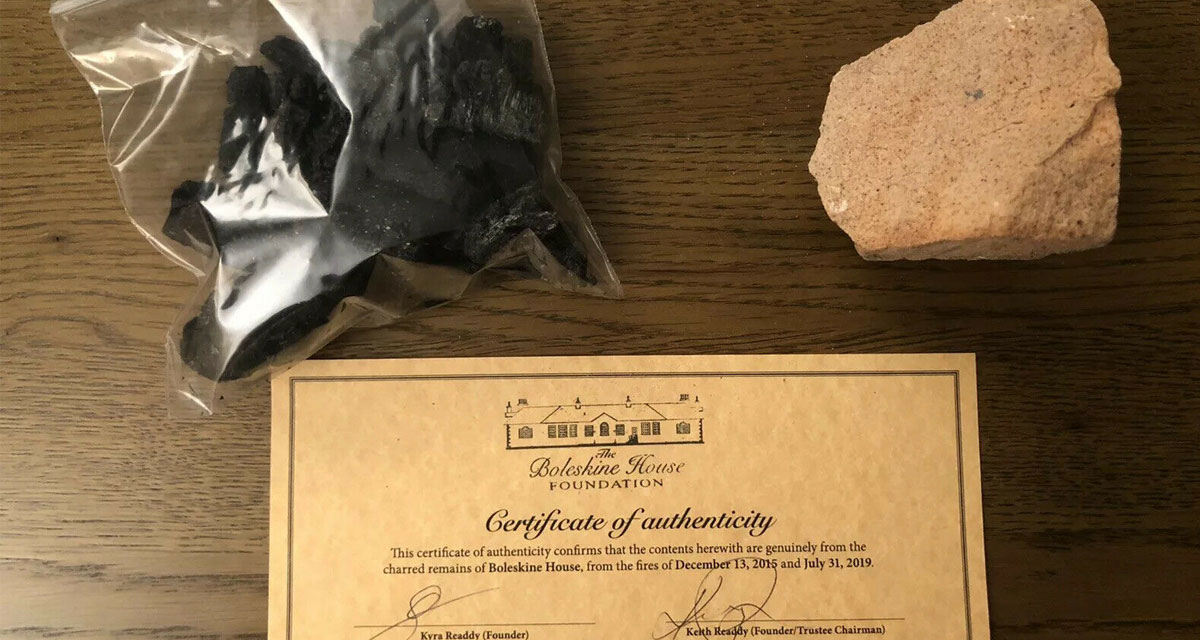