A “Hand of Glory” was the mummified hand of a hanged man that, when combined with a candle made from the dead man’s fat, would magically entrance the person it was given to. 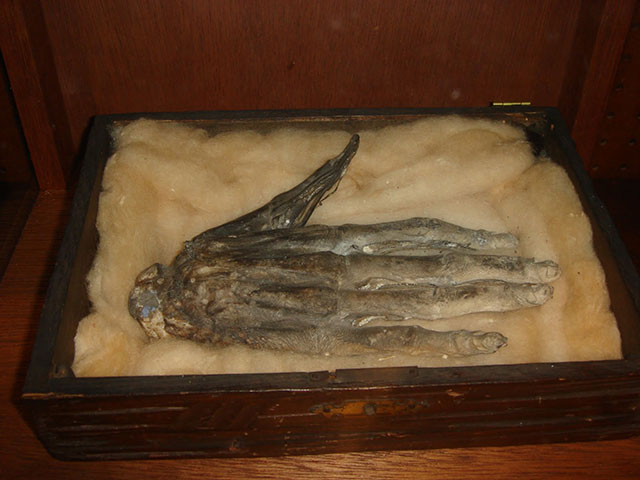 A “Hand of Glory” is the pickled hand of a man who has been hanged. Usually the left hand was used. If the man was hanged for murder, then the hand with which he committed the crime would be used.

Fat from the hanged man would be used to craft a candle, which would be placed in the severed hand. Sometimes the wick would be made from the hair of the same man.

The Hand of Glory was believed to possess magical powers in European occult traditions. It was said that a Hand of Glory would render people motionless, open locked doors or give light only to the person holding it.

The 18th century Le Petit Albert grimoire, which contains natural and cabalistic magic to achieve a variety of things ranging from protective talismans, plague balms and repairing lost virginity to ensuring a beautiful crop of ripe grapes and sweet melons, has this to say about the Hand of Glory:

I confess that I have never experienced the secret of the hand of glory; but I have been present three times at the final judgment of certain scoundrels who confessed to torture having used the hand of glory in the thefts they had committed; & as in the interrogation they were asked what it was, & how they had got it, & what was the use of it, they replied, first, that the use of the hand of glory was to amaze & render motionless those to whom it was presented, so that they could not shake either if they were dead; secondly, that it was the hand of a hanged man; thirdly, that it had to be prepared in the following way. We take the right hand or the left of a hanged man exposed on the highways; it is wrapped in a piece of funeral sheet, in which it is pressed well to make it return the little blood which may have remained; then we put it in an earthen vase with zimat, saltpeter, salt & long pepper, all well pulverized: we leave it for fifteen days in this jar; then having pulled it out, it is exposed to the great sun of the heatwave, until it has become quite dry; & if the sun is not enough, we put it in an oven which is heated with fern & verbena; then we compose a kind of candle with hangman’s fat, virgin wax & Lapland sisame, & we use this hand of glory as of a candlestick, to hold this lighted candle therein; & in all the places where one goes with this fatal instrument, those who are there remain motionless; & on what they were asked, if there was no remedy to guarantee this prestige, they said that the hand of glory became ineffective, and that thieves could not use it if they rubbed the threshold of the door of the house, or the other places through which they can enter, with an ointment composed of black cat siel, white hen fat & owl blood, and that this preparation had to be made during the heatwave. 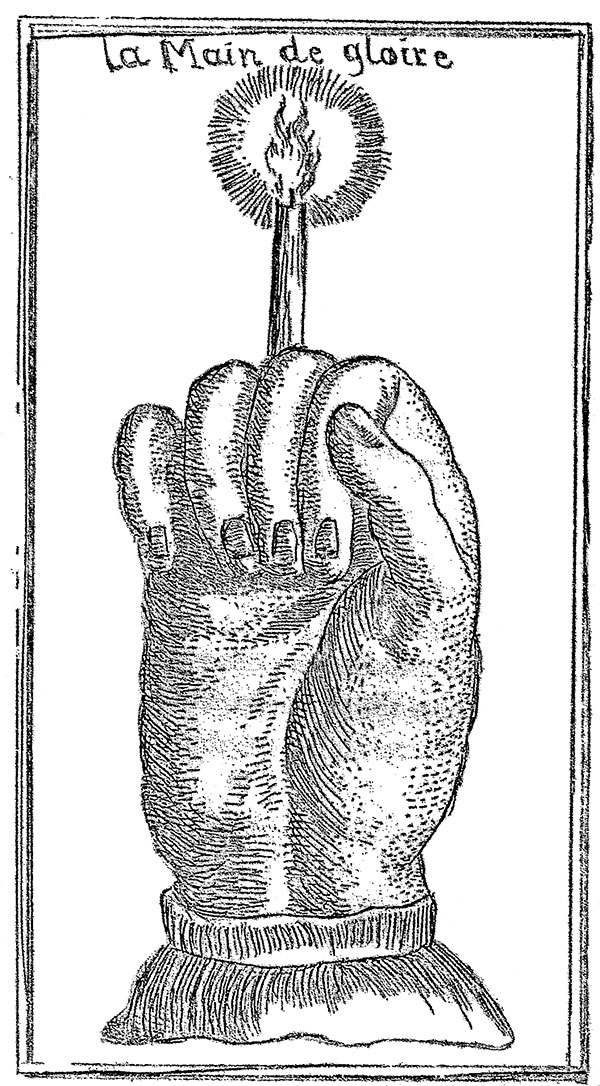 The Whitby Museum in Yorkshire, England displays the only Hand of Glory ever found. It was discovered by a mason in the early 1900s on the roof wall plate of the Hawthorn Cottage in Danby.

My grandmother told me the story of a woman in rural Galway Ireland who had such a hand and used it to ceremonially scoop out butter from a small hand ( no pun intended) churn while saying a prosperity chant ” come gather on my plate from Cashel to Glinsk” until local neighbors told a priest who insisted that it should be buried. This would have been in the late 19th early 20th century. Oddly her cows would provide lots of milk and cream while other farmers had shortfalls. 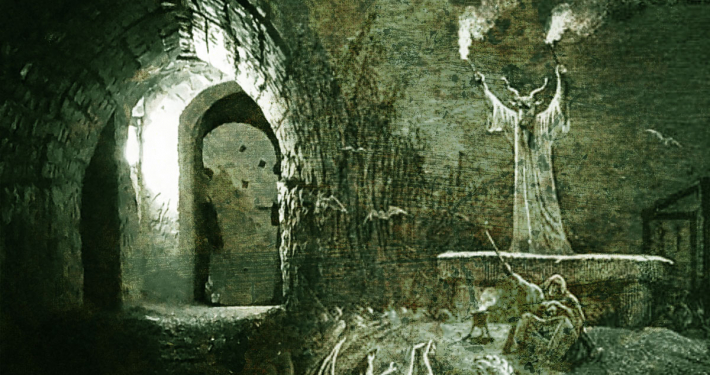 Demon worship, black masses, unholy baboons, and Benjamin Franklin. What went on during those meetings of the Hellfire Club deep in the caves of West Wycombe?