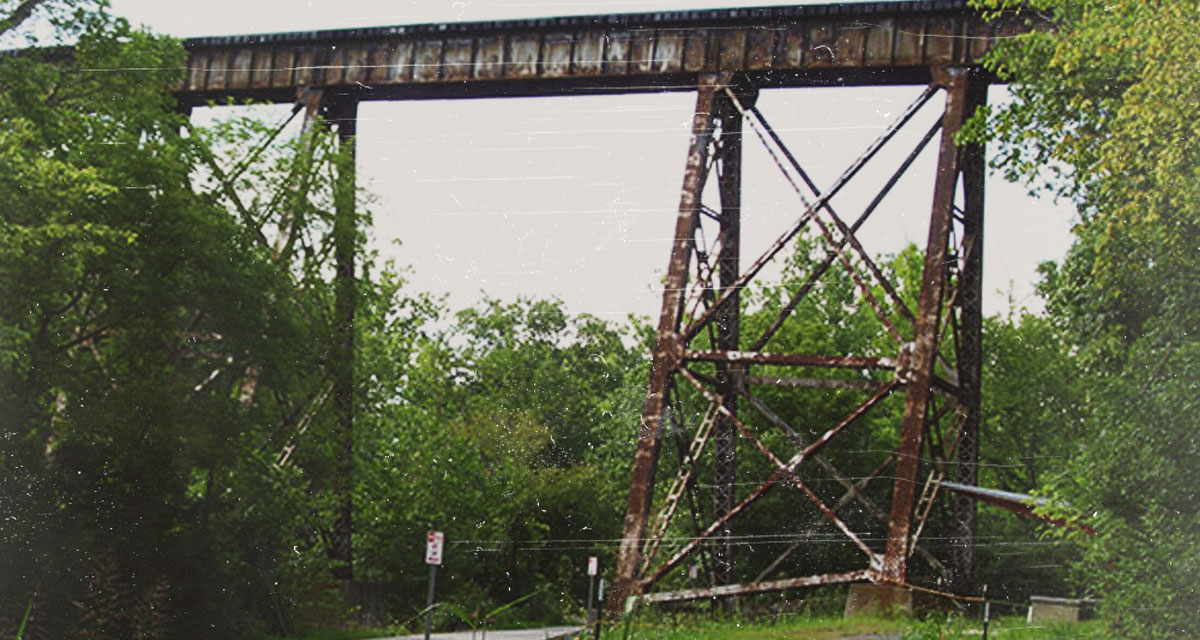 Paranormal author and investigator J. Nathan Couch goes in search of the Pope Lick Monster in Louisville, Kentucky, which is responsible for at least 3 deaths.

Wisconsin paranormal researcher J. Nathan Couch recently took a “legend trip” to Kentucky. Legend tripping is the act of visiting an allegedly haunted location to try and experience the legend for yourself. This is the second in a series of articles by Couch following the Waverly Hills Sanatorium tour.

Legend of the Pope Lick Monster

The Pope Lick Monster is said to be a strange, savage amalgamation. He’s often described as a large humanoid creature with furry, goat-like legs, alabaster skin, wide-set eyes, and horns that protrude from greasy fur. The monster is sometimes referred to as Goatman or even Sheepman. According to story, the beast was originally captured in the wilds of Canada around the end of the 19th century. The Goatman became the star of a circus’s freak show until an electrical storm caused a train derailment. This devil-like creature was supposedly the only survivor. Instead of returning to the vast northern wilderness, the Goatman made his way to the Pope Lick Trestle, and is said to reside there even now. 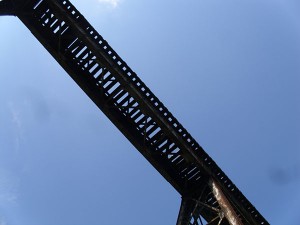 The December 30th, 1988 Louisville Courier-Journal ran a front page article entitled Trestle of Death, in which it records two tragedies. Jack “J.C.” Charles Bahm II, a 17-year old Spalding University student, was struck and killed by a train February 18, 1987 while crossing the trestle. He has since been eulogized at the site of his death. “JC we love and miss you” is spray painted on the trestle’s base. In May 1987, 19-year-old David Wayne Bryant died of injuries obtained in 1986 when he jumped from the trestle to dodge an oncoming locomotive.

Versions of the Pope Lick Monster legend have been in circulation since the 1960s, and the area around the trestle was a popular party location for area youth, but it took the Louisville premiere of the 1988 short film “The Legend of the Pope Lick Monster” to persuade the railroad it needed something more daunting than trampled chicken wire to keep the public off the trestle. The night of said premiere, two boys were arrested when they attempted to climb out onto the trestle. Immediately thereafter, a six-foot high security fence was installed.

The fence, along with a heightened police presence still hasn’t kept people away from the tracks. In 2000, a 19 year-old Mount Washington man named Nicholas Jewell was shaken from the trestle by a train’s vibrations as he tried to hang from the trestle to avoid being hit by a train.

On July 27, 2013 I went in search of this trestle to see if I could understand why anyone would risk their lives in search of a monster. As I turned onto Taylorsville Road, I caught a glimpse of the ancient looking track as it ran parallel to the road, nearly hidden by the trees. I felt as if I’d caught a glimpse of an immense, sleeping serpent. I turned onto Pope Lick Road and the trestle immediately towered some 100 feet overhead. The narrow, curved road had a surprisingly high amount of traffic when I was there, and with no visible shoulder on the road, my only recourse was to park at a nearby gas station. As soon as I pulled into the parking lot, I noticed a Louisville Sheriff’s Department patrol car sitting unmanned. I refused to be daunted by this; I’d come all the way from Wisconsin for this trip. There would be no turning back. Besides, I had no intention of going anywhere near the tracks, nor did I plan to climb any fences. 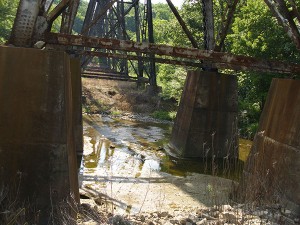 Despite my lawful intentions, I felt like a criminal as I navigated an astonishingly high amount of traffic to take pictures from a nearby bicycle trail. Next I walked down the shoulder of the road to stand beneath the tracks. I felt a strong need to gaze up. As I did, the light through the railroad ties was dazzling, and I felt dizzy on the uneven shoulder. My imagination conjured up the approach of a train. The trestle is 772 feet from end-to-end. If you’re stranded up there with a train coming, it’s impossible to out run the locomotive and the engineer has no hope of stopping in time. The body of one of the men that was hit was recovered a couple of miles from the trestle. I turned and examined the creek, which on this day barely qualified as a trickle. One’s only choice is to leap off the trestle, a jump that it’s vastly improbable to survive.

I envisioned the Goatman—a poorly disguised image of the devil himself—and I was reminded how certain members of the Jeffersontown and Louisville community believe the Pope Lick Monster—or some other supernatural force—DID persuade those kids out onto the track. As I walked back to my car, I took a final look at the antiquated, foreboding structure and I couldn’t put myself in those kids’ shoes at all. Having been a nervous and meek youth growing up, I couldn’t imagine needing a thrill so bad that I’d wander onto the trestle.

While I wouldn’t go as far as say supernatural provocation caused the death of those kids, the Pope Lick Monster DID lure them out onto the trestle, if only with his legend. 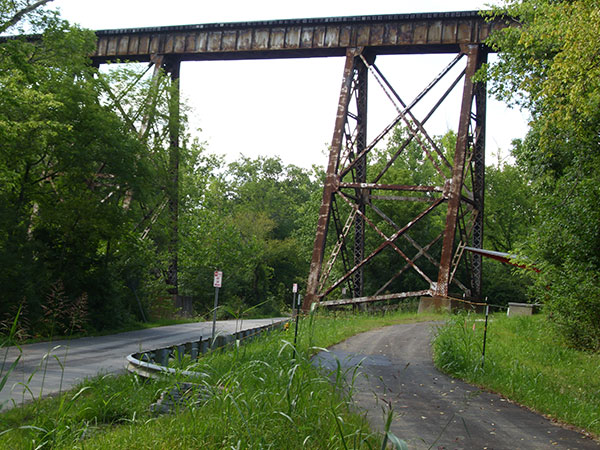 CAUTION: Trespassing ruins legend tripping for everyone. Also, never ever play or loiter on railroad tracks. Funerals aren’t fun for anyone.

Read more about the Pope Lick Monster in Goatman: Flesh or Folklore?

Aliens Serve A Wisconsin Man Pancakes from Their UFO
23 replies