Summerwind Mansion: The Legends of Wisconsin’s Most Notorious Haunted House

The ruins of Summerwind Mansion in Wisconsin abound with creepy legends, including a corpse in a closet, a man who shot at a ghost, and the spirit of 18th century explorer Jonathan Carver. What really happened inside one of the most haunted places in the country? 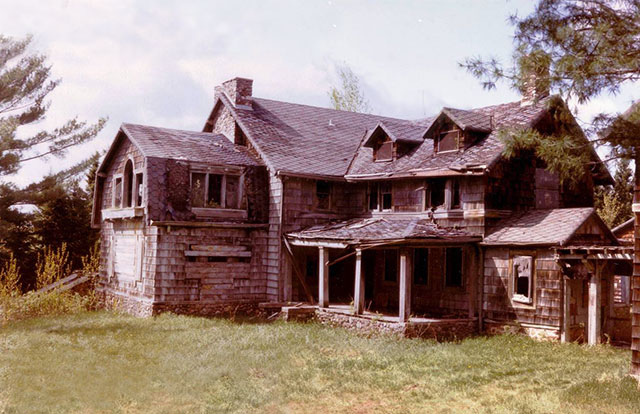 The ruins of Summerwind Mansion before in burned in 1988

Summerwind, also known as Lamont Mansion, is undoubtedly Wisconsin‘s most haunted house if the stories are true.

The house was built in 1916 on the shores of West Bay Lake in Land O’ Lakes, Wisconsin by Robert Patterson Lamont. Not much seems to be recorded from this period, though legend says holes in the basement door were the result of Lamont firing his pistol at what he believed to be an intruder…until the bullets passed right through it.

After Lamont’s death, Summerwind changed hands several hands, and spent some time vacant before Arnold and Ginger Hinshaw moved in with their children in the 1970s.

It wasn’t long before they began to experience strange phenomena, including mumbling voices in empty rooms, doors and windows opening and closing by themselves, and the apparition of a woman.

But it wasn’t until the discovery of a human corpse in a hidden closet compartment that things got bad.

Arnold began to have a nervous breakdown.

He would often play his Hammond organ late at night in a frenzy, while his frightened family huddled together and cried. Arnold said demons in his head demanded that he play.

During this time, Ginger attempted suicide.

Eventually Arnold was sent away for treatment, and Ginger moved herself and her children out of the house.

They had only occupied Summerwind for six months before it drove them mad.

The Ghost of Jonathan Carver

Ginger’s father, Raymond Bober, decided to buy the house. He wrote about his time there in the out-of-print book The Carver Effect, in which he claims the house is haunted by the ghost of an 18th century British explorer named Jonathan Carver.

Bober claimed Carver’s spirit was searching for a deed sealed somewhere in its foundation that gave him rights to the northern third of Wisconsin.

In June of 1988, lightning struck the abandoned mansion and it burned to the ground. All that remains today is the field stone foundation and chimneys being slowly swallowed by the forest.