The Most Horrific Publicized Case of Exorcism in American History

America’s foremost exorcist, Theophilus Riesinger, faced off with Lucifer himself in the grueling 1928 case of demonic possession in a rural Iowa convent.

I’ve lived in Wisconsin my entire life, researching its fascinating and unexpected ties to the weird, dark corners of history for as long as I can remember. Sometimes it seems this state exists in some kind of anomalous vortex of the bizarre, with a unique concentration of ghost stories, murderous cannibals, circus history, world-famous hoaxes, and incredibly eccentric (or just plain mad) individuals. We have Ed Gein, Goatman, the Beast of Bray Road, pancake-serving aliens, and…famous exorcists.

Last fall I discovered Father Walter Halloran, who assisted in the exorcism of Roland Doe in 1949, was buried in Milwaukee. Having weird history like that so close to home is exciting, but it turns out that Wisconsin was the stomping grounds of another even more legendary exorcist, one who participated in a case that shocked the world.

In the first episode of a new podcast called Wisconsinology, historian Frank L. Anderson tells the story of Theophilus Riesinger, a Capuchin friar from Appleton, Wisconsin who became America’s foremost exorcist. Riesinger performed at least 22 exorcisms in his lifetime, but it was the harrowing case of demonic possession in 1928 that became the most publicized case of exorcism in American history. The details, based on eyewitness accounts, were published in the early 1930s in a 48-page booklet called Begone Satan! by Rev. Carl Vogl. It was originally written in German, but when it was translated into English in 1935, the case garnered widespread attention in Catholic publications, newspapers, and even Time magazine.

The booklet would eventually serve as research material for author William Peter Blatty, whose depiction of possession in The Exorcist very closely mirrors the events said to have taken place in an Iowa convent in 1928.

The Exorcism of Emma Schmidt

Father Riesinger performed his very first exorcism in 1912. The subject was a girl from the town of Marathon, Wisconsin who’s name was either Anna Ecklund or Emma Schmidt – she has been written about under several different names presumably to protect her identity. She had begun to manifest symptoms of demonic possession when she was just 14. Riesinger, who would became known as a “potent and mystic exorcist of demons” as noted in the February 17, 1936 issue of Time, was called upon to perform the rite.

Riesinger drove the demons out of the girl and went on to help many others he believed were in need of spiritual cleansing. Many years later, in 1928, Emma was in her 40s and found herself once again experiencing symptoms of demonic influence.

“She wanted to pray, wanted to go to church and as usual receive Holy Communion,” Vogl wrote in Begone Satan! “But some interior hidden power was interfering with her plans. The situation became worse instead of improving. Words cannot express what she had to suffer. She was actually barred from the consolations of the Church, torn away from them by force. She could not help herself in any way and seemed to be in the clutches of some mysterious power. She was conscious of some sinister inner voices that kept on suggesting most disagreeable things to her. These voices tried their utmost to arouse thoughts of the most shameful type within her, and tried to induce her to do things unmentionable and even to bring her to despair. The poor creature was helpless and secretly was of the opinion that she would become insane.”

“You cannot imagine the terrible symptoms and feelings that possessed persons have. Strange cats and dogs talk to them in the night. They cannot perform their religious duties, they are kept away from the sacraments, they are exceedingly unhappy.” – Father Theophilus Riesinger, 1936

While preaching on mission at St. Joseph Parish in Earling, Iowa, Riesinger made an unusual request of Rev. Joseph Steiger. Riesinger wanted to bring the possessed woman from Wisconsin to Steiger’s rural parish to perform an exorcism where it would avoid drawing unwanted attention. Steiger agreed, and the woman was brought to the Franciscan convent just outside of town.

“The woman was placed firmly upon the mattress of an iron bed,” Vogl wrote. “Upon the advice of Father Theophilus, her arm-sleeves and her dress were tightly bound so as to prevent any devilish tricks. The strongest nuns were selected to assist her in case anything might happen. There was a suspicion that the devil might attempt attacking the exorcist during the ceremony. Should anything unusual happen, the nuns were to hold the woman quiet upon her bed. Soon after the prescribed prayers of the Church were begun, the woman sank into unconsciousness and remained in that state throughout the period of exorcism. Her eyes were closed up so tightly that no force could open them.”

But, when Riesinger began the rite of exorcism, the woman “dislodged herself from her bed and from the hands of her guards; and her body, carried through the air, landed high above the door of the room and clung to the wall with a tenacious grip. All present were struck with a trembling fear. Father Theophilus alone kept his peace.”

The attending sisters dragged her back down to the bed and restrained her. Loud howling sounds began to emanate from the woman, drawing the attention of everyone in the convent. They came to see what was happening, but many couldn’t handle it. Vogl wrote, “The physical condition of the possessed presented such a gruesome sight, because of the distorted members of her body, that it was unbearable.”

Cursed by Her Father

The exorcism lasted a total of 23 days, during which the woman was consistently vomiting things resembling chewed macaroni and tea leaves, though she wasn’t actually eating anything, and spoke in numerous voices, making inhuman animal sounds. She seemed to understand languages she had never heard or read before, and foamed at the mouth, enraged, when Riesinger spoke Latin blessings over her. “She was conscious at once when some one gave her articles sprinkled with holy water or presented her with things secretly blessed, whereas ordinary secular objects would leave her perfectly indifferent.”

When asked how many spirits had possessed the woman, she responded that there were many, and that Beelzebub was the leader. Under Riesinger’s questioning, Beelzebub stated that the woman’s own father was the cause of the possession, having “cursed” the spirits into her, and that they had possessed her under the command of Satan himself.

At one point, when Riesinger was asking to speak with the woman’s father, whom Beelzebub said was with them, a voice claiming to be Judas Iscariot began speaking instead. When Riesinger asked what business he had with the woman, Judas replied, “To bring her to despair, so that she will commit suicide and hang herself! She must get the rope, she must go to hell!” Other voices claiming to be Emma’s father Jacob, as well as his child-murdering concubine Mina, eventually spoke, as well.

Vogl wrote that during the exorcism the demonic presence inside the woman began to physically deform her. “The woman’s face became so distorted that no one could recognize her features. Then, too, her whole body became so horribly disfigured that the regular contour of her body vanished. Her pale, deathlike and emaciated head, often assuming the size of an inverted water pitcher, became as red as glowing embers. Her eyes protruded out of their sockets, her lips swelled up to proportions equalling the size of hands, and her thin emaciated body was bloated to such enormous size that the pastor and some of the Sisters drew back out of fright, thinking that the woman would be torn to pieces and burst asunder. At times her abdominal region and extremities became as hard as iron and stone. In such instances the weight of her body pressed into the iron bedstead so that the iron rods of the bed bent to the floor.”

Riesinger said that Lucifer himself had appeared during the process. Vogl wrote, “Once Father Theophilus saw Lucifer standing visibly before him for half an hour–a fiery being in his characteristically demoniac reality. He had a crown on his head and carried a fiery sword in his hand. Beelzebub stood alongside of him. During this time the whole room was filled with flames.”

On December 23rd, 1928, when Riesinger was exhausted and appeared to those around him to have aged 20 years from performing the exorcism for three days straight without sleep, the devils finally receded back to Hell. The woman stood upright suddenly in her bed, then collapsed. A piercing sound filled the room, followed by the repeated names of the demons inside her. This slowly faded away, and was replaced by an horrible, unearthly stench. The woman opened her eyes and shouted “My Jesus, Mercy! Praised be Jesus Christ!” 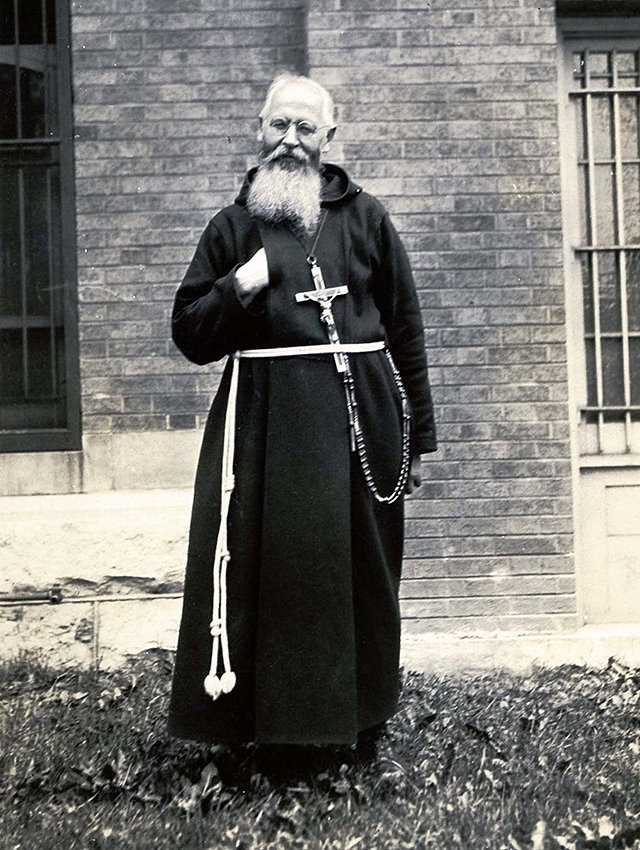 Some sources say the case of Emma Schmidt was the first and last exorcism officially sanctioned by the Catholic church. While some believe the events are fiction, there are allegedly papal records documenting it. Also, according to an online source, local Earling legend says that claw marks in solid oak doors can still be seen from the woman trying to escape.

A very interesting article, thanks. I recently read Hostage to the Devil and, while not Catholic, have no doubt that these entities are real and can and do possess people. That book is well worth a read.

My son looks just like this Priest could be his doppelganger

A Catholic priest MUST seek permission from the local bishop. If he doesn’t, the exorcism probably will not be effective.

Great article! Although the last paragraph has an incorrect detail, as exorcisms were definitely performed by priests of the Catholic Church long before this case and are still performed in the Catholic Church today. A priest is also supposed to seek permission from his bishop, therefore having the exorcism sanctioned by the Church, before he begins the rite. Genuine possessions are very rare, exorcisms are definitely not a common occurrence in the Church, but they are not as rare and unheard of as that last paragraph would make it sound.

Why do people still believe this in 2019

Haha. Some real gullible mofos here. Surprising. Have fun playing your little Catholics and demons game. The rest of us will deal with reality.