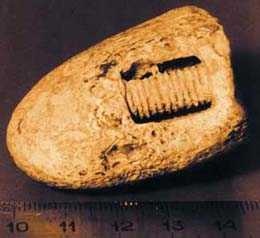 While investigating the remains of a meteorite outside of Moscow in 1998, Russian scientists discovered a rock with a screw firmly fixed inside.

Experts agree the screw was artificially constructed, rather than being the result of a natural process.

Reports of evidence of intelligent life existing on Earth in prehistoric times pop up from time to time. These reports include machined parts such as spheres, screws and toothed wheels, as well as more bizarre discoveries such as manufactured boot, sandal and foot prints embedded in billion-year-old stone.

Researchers claim most of the evidence is now gathering dust in the basements of the world’s most prestigious institutions.