Jumbo the Elephant: The Life and Afterlife of the Largest Animal in the World

Jumbo the elephant, the animal P.T. Barnum called the “largest animal in the world,” was struck and killed by a train on September 15th, 1885. But that was far from the end of Jumbo’s story. 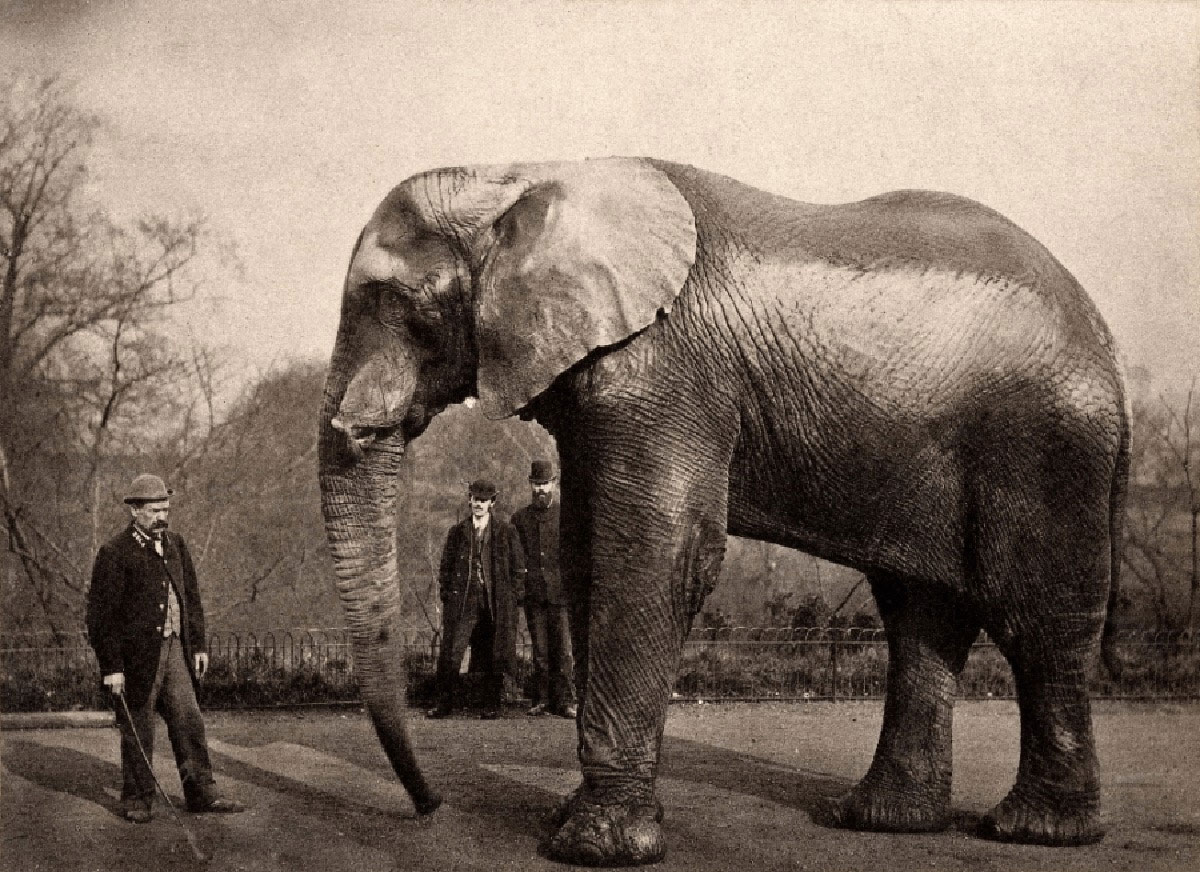 Jumbo was taken from the African savanna by a group of nomadic hunters when he was just four years old. They killed his mother, and sold him to the London zoo in 1860. He lived there in a small stable, giving rides to children day after day. The public was fascinated by the gigantic animal. Among those in awe of the magnificent creature were Teddy Roosevelt, Winston Churchill, and even the queen of England herself, Queen Victoria’s children got a ride on Jumbo’s back.

In 1882, the then 21 year old elephant was in declining health and becoming difficult to control as he was entering the elephant equivalent of puberty. The safety of zoo visitors was becoming a concern.

That’s when legendary showman PT Barnum made his move. The Barnum & Bailey Circus – the “Greatest Show on Earth” – needed the “largest animal on earth.” Elephants were essential to the success of a circus show back then, but Jumbo was special and Barnum knew he would draw larger crowds then any other. He offered the zoo $30,000, an offer they couldn’t refuse.

But Jumbo didn’t want to go.

A huge crate was built to transport Jumbo, but he would not go in. It took weeks of gentle coaxing to lure him inside. The British people sympathized with Jumbo, which lead to a great public outcry. 15,000 people a day visited Jumbo to pay their respects, bring him food, and protest the sale.

Despite the objections – even Queen Victoria expressed her disappointment – zookeepers eventually got Jumbo into the crate and Barnum won.

It was clear that handling the difficult elephant was going to be a challenge. There was one man Jumbo would listen to – his trainer Matthew “Scotty” Scott. Scotty had been caring for Jumbo ever since his arrival in London. He shared a bottle of beer with the elephant every night before bed.

Barnum hired Scotty and they departed for New York. Scotty would care for Jumbo for the rest of his life.

Jumbo was greeted upon his arrival by a crowd of 10,000 people eager to get a glimpse of the legendary animal. His crate was pulled up Broadway by a team of horses while the crowd cheered.

The first two weeks of ticket sales alone, Barnum noted in his memoirs, more than covered the cost of purchase and shipping.

But Jumbo spent just three years touring with Barnum’s circus before the tragedy that took his life. 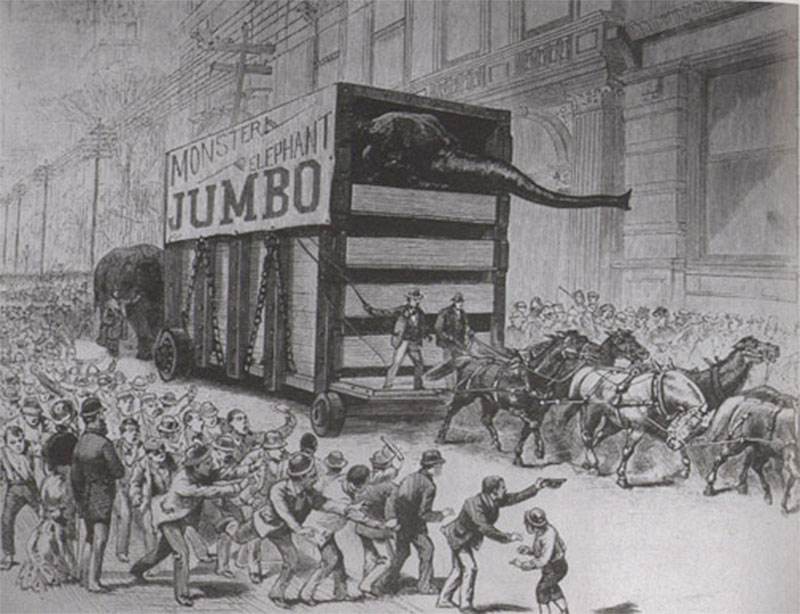 Jumbo vs the Train

On September 15, 1885, Jumbo was struck and killed by a train during a stop in St. Thomas, Ontario.

Jumbo and another well-known elephant, a dwarf named Tom Thumb, were being loaded into a boxcar after the show when suddenly an unscheduled freight train came around the bend and was bearing down on them.

As Barnum told the story, Jumbo was trying to save Tom Thumb from the oncoming train by nudging the little elephant off the tracks. Tom Thumb survived with little more than a broken leg, but Jumbo, running from the train, couldn’t get out of the way in time. The train slammed into him and dragged him 300 feet down the track before it finally derailed.

Scotty ran to him and quickly realized that Jumbo was dying. Scotty stayed by his side, and Jumbo held his hand with his trunk until the end. It was only a matter of minutes.

In the aftermath of the accident, someone had cut off part of Jumbo’s ear as a souvenir. Those nearby said Scott had flown into a rage when he discovered it.

Rumors abound that Jumbo had already been sick and dying from mistreatment, and was lead deliberately into the path of the oncoming train to prevent accusations of animal cruelty. Nothing ever came of came of it, but it was enough to cast doubt over Barnum’s account of the day’s events. 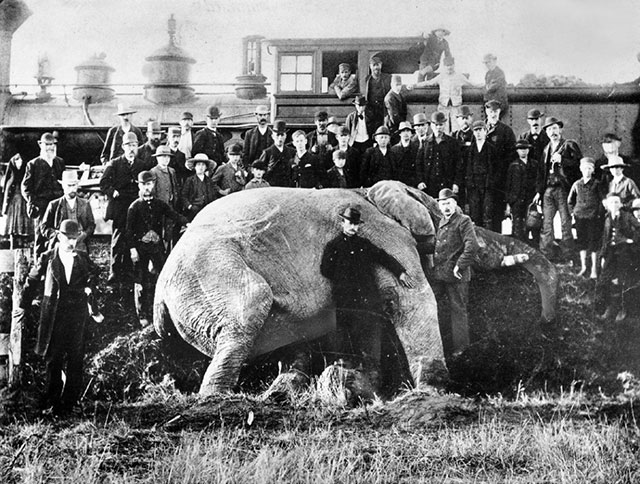 Jumbo was dead, but Barnum wasn’t about to let his investment go. A dead elephant could still make money. He called in expert taxidermists from Ward’s Natural Science Establishment in Rochester, New York.

Ward sent taxidermists William J. Critchley and Carl Akeley to articulate Jumbo’s massive skeleton and mount the hide. At Barnum’s request, they stretched the hide to make the final mount taller than Jumbo had been in life.

“It is worth $100,000 or more per year for exhibition in our show,” Barnum said of the taxidermy mount.

In 1886, Barnum bought another elephant named Alice from the London zoo. Alice had been Jumbo’s companion. Newspapers called her “Jumbo’s Wife” and, after his death, his “grief-stricken widow.”

“When Alice first saw the stuffed skin of Jumbo she seemed like one in a trance. Then she touched his skin with her trunk and again burst into a flood of tears. She knew at last that he was dead, and as she looked into his glassy eyes and fondled his stuffed forehead with her trunk she seemed to say: ‘My poor old Jumbo, your Alice weeps for you.'”

Jumbo’s skin and articulated skeleton continued to tour with the circus for the next several years. 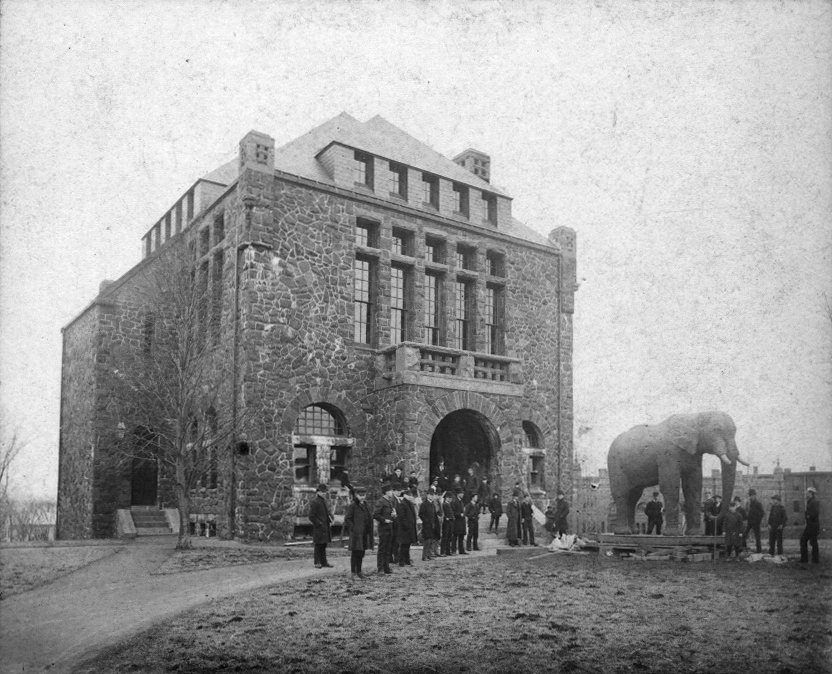 Jumbo being moved into the Barnum Museum at Tufts Museum, 1889

In 1889, Barnum donated Jumbo to Tufts University in Massachusetts, of which Barnum was a founding trustee and benefactor.

Jumbo joined the collection of the Barnum Museum of Natural History at Tufts, taking his place as the centerpiece among other rare and valuable taxidermied creatures from the circus. The entrance to Barnum Hall had to be disassembled so the 1,500-pound elephant would fit through.

Jumbo was known to smell a bit on rainy days, but students loved him. It soon became tradition to tug on his tail or drop coins into his trunk for good luck before a tough exam or a big game.

“One of the senior members of the faculty, zoology professor Bud Carpenter, would carefully collect the pennies,” Biology Professor Emeritus Nancy Milburn related in an oral history. “He made enough money to replace the ashtrays in the lounge that students kept stealing for their rooms.” 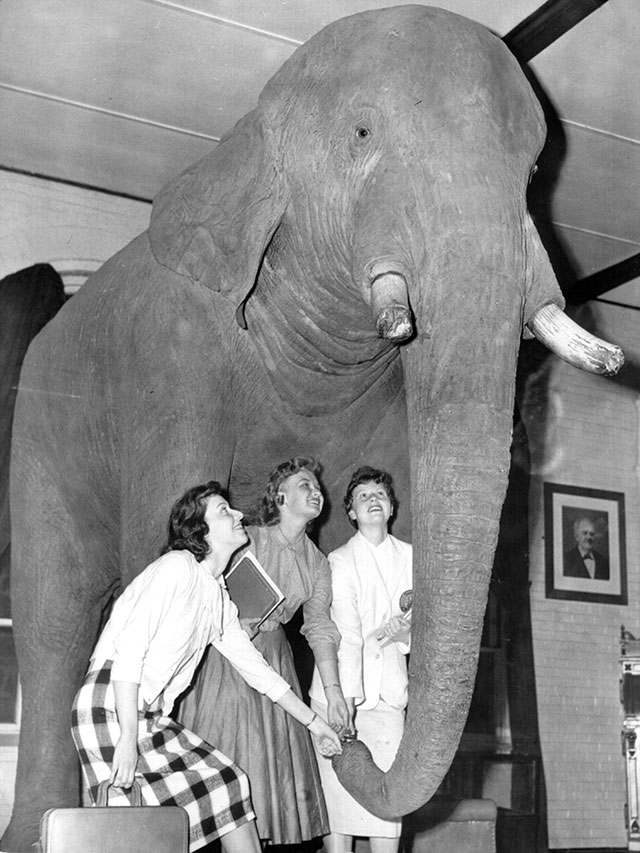 Over the years, pieces of Jumbo’s tusks were broken off for souvenirs. One story says that Barnum himself once threw a party that served gelatin made from them. And the tail that was pulled for good luck was eventually tugged right off.

Jumbo was in rough shape, but he was beloved, and was adopted as the school mascot.

In 1975, Barnum Hall was gutted by an electrical fire. No one was hurt, but Jumbo and the rest of the natural history collection was reduced to ashes. Only the metal armature inside Jumbo that held him upright remained in the charred ruins.

But, as the Tuft website says, Jumbo’s spirit lives on.

And a few pieces of him.

The building smoldered for days. When it was safe to enter, Tuft athletic director Rocky Carzo and administrative assistant Phyllis Byrne hatched a perpetuate Jumbo’s legacy.

They sent a maintenance man in with a Peter Pan peanut butter jar to collect ashes.

“I put this jar in my office until I retired,” Carzo said, “and they turned it over to my successor, Bill Gehling.”

The jar of Jumbo’s ashes remains on a shelf in the athletic director’s office to this day, passed down ceremoniously to each new successor. 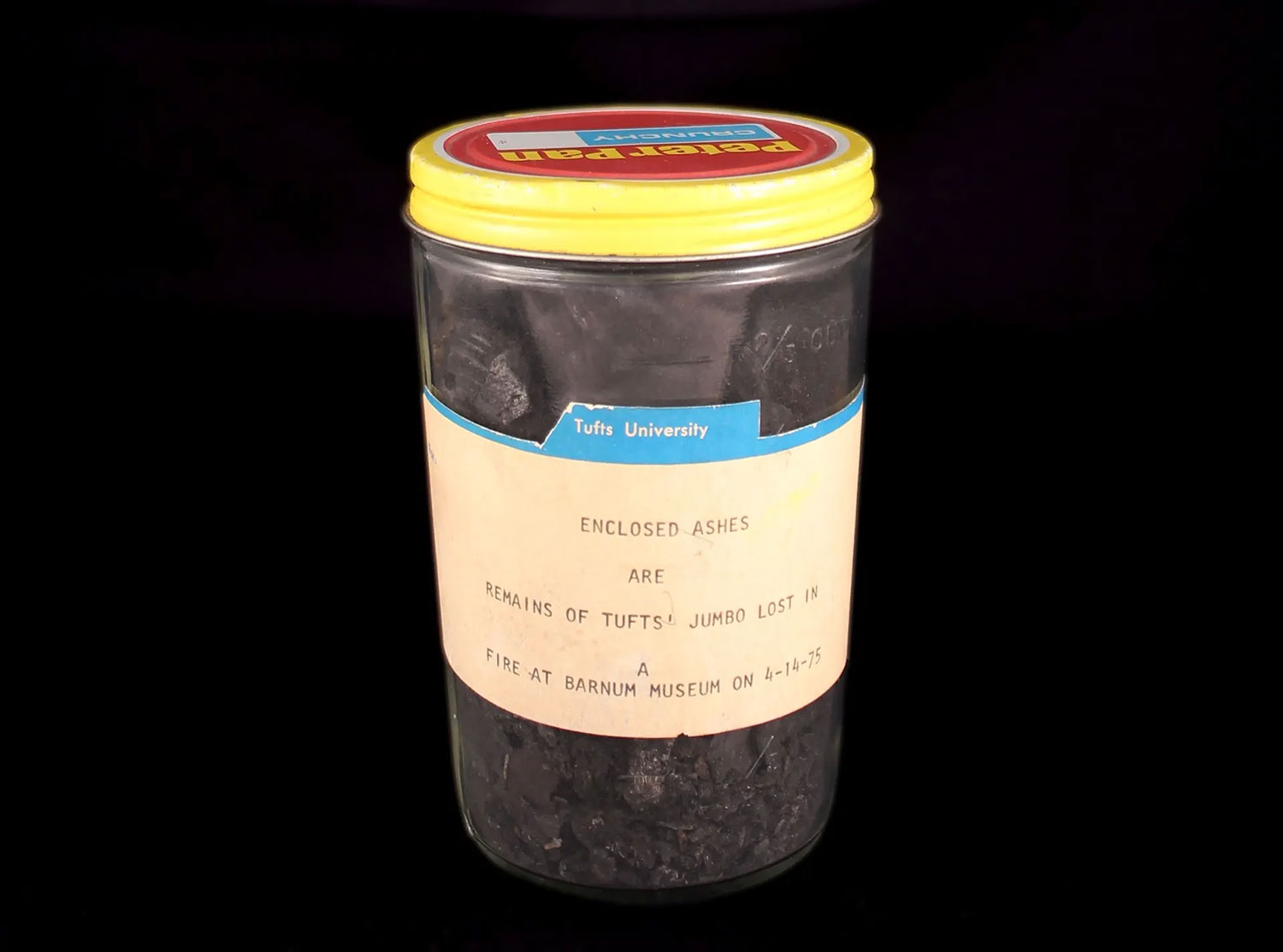 “It’s an honor for me to be the keeper of the ashes while serving as athletics director,” John Morris, who currently holds the position at Tufts, said in an interview.

In 2015, a bronze statue of Jumbo was erected outside the rebuilt Barnum Hall to commemorate the 125th anniversary of his arrival on campus.

Tufts keeps several small pieces of Jumbo in a cardboard box in the university archives – pieces of skin, slices of trunk, a whisker. And, of course, his tail – which remains quite popular.

“It is so frequently requested we keep it in easy reach,” Anne Sauer, former director of Digital Collections and Archives, told The Guardian during her tenure at Tufts.

Jumbo’s heart was saved during the taxidermy process. Henry Ward sold it to Cornell University for $40, where it was preserved with alcohol in a massive 2-foot tall specimen jar.

The jar was rediscovered in the 1940s. It was empty, with only an old label describing what it had once contained. 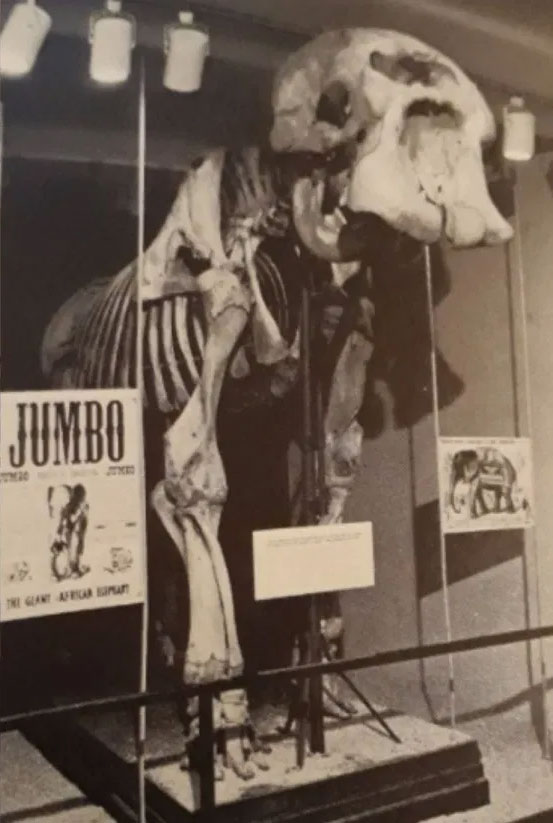 When Barnum sent the taxidermy mount to Tufts in 1889, he also gifted Jumbo’s skeleton to the American Museum of Natural History. It remained on display in the museum until 1969, when memory of the great elephant had faded.

The display was brought out again in 1975, probably due to a briefly renewed interest after the Tufts fire, and then packed away in deep storage.

Jumbo’s enormous bones didn’t make another public appearance until 1993, when the museum put them back on display briefly to mark the 200th anniversary of the circus in America.

Most recently, a team of researchers along with David Attenborough, David Suzuki and a crew of Canadian and British filmmakers gained access to Jumbo’s bones in 2017 to solve a few mysteries surrounding the death of the world’s most famous elephant.

Was Jumbo mistreated? Was his death a conspiracy? And most importantly, was he really the biggest elephant in the world? 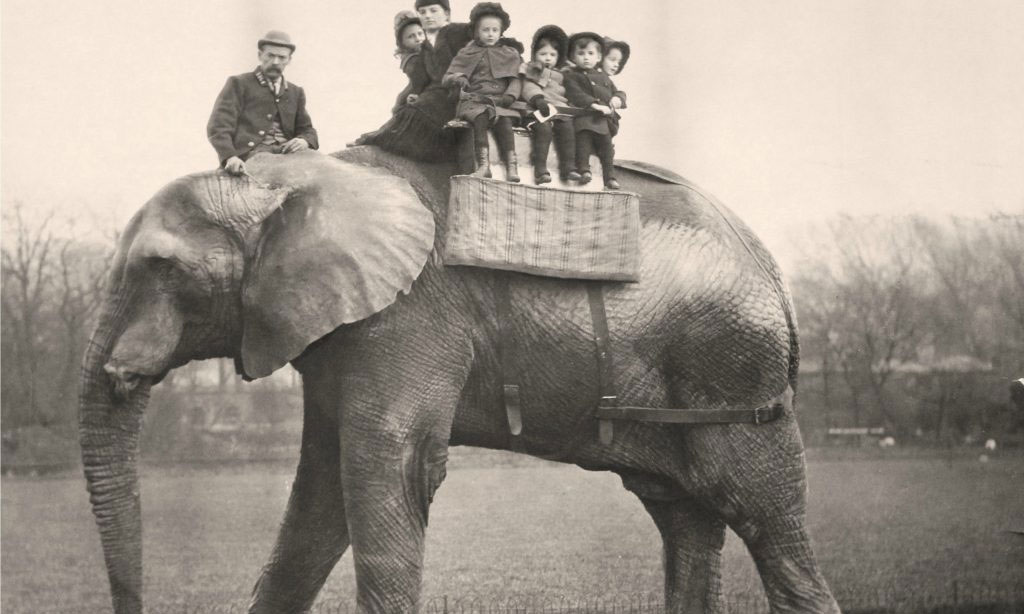 The team found evidence that Jumbo’s soft diet of hay, oats and grasses, rather than than the barks, twigs and leaves elephants eat in the wild, caused painful deformities in his teeth.

From his time giving rides or being chained up, they found that Jumbo’s joints looked like those of a 60-year-old elephant, not 24.

“Just the overall configuration of the knee joint really yelled out to me that this was not a normal elephant’s knee,” mammal expert John Hutchinson said. “This was an animal that had problems.”

As for the conspiracy theory that Jumbo was intentionally lead directly into the oncoming train?

The impact of the train did not break any of Jumbo’s bones – it was massive internal trauma that killed him – but a recently rediscovered photo showed abrasions along his rear flank to support that he was hit from behind.

And finally, was Jumbo the biggest elephant that ever lived?

The team measured Jumbo’s femur and determined he would have stood 10.5 feet tall. That’s obviously a bit shorter that Barnum boasted, but it was still 20% larger than the average for elephants his age – and he still had another 16 years of growth ahead of him.

According to Hutchinson, “He was exceptional.” 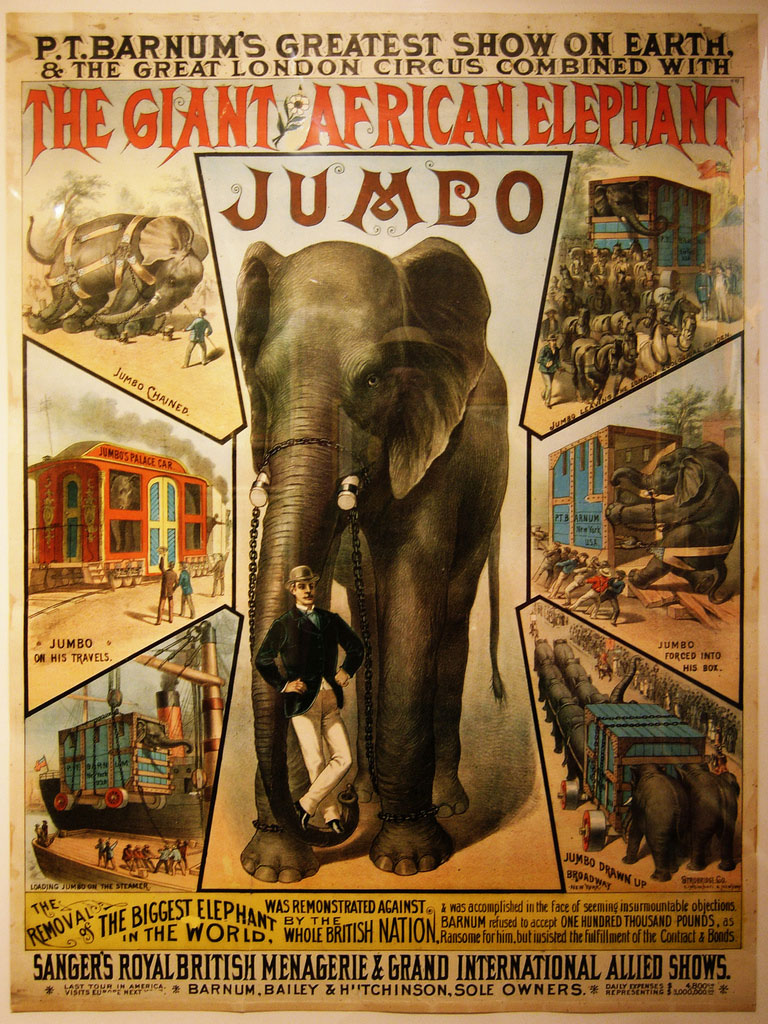 Jumbo with his keeper Matthew Scott, 1882 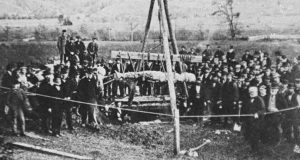 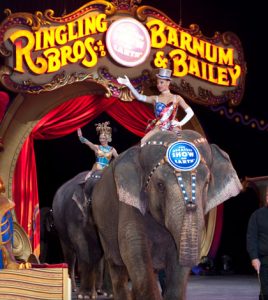 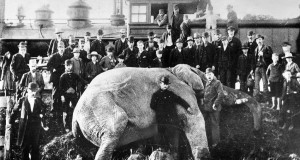 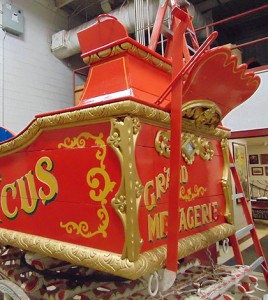