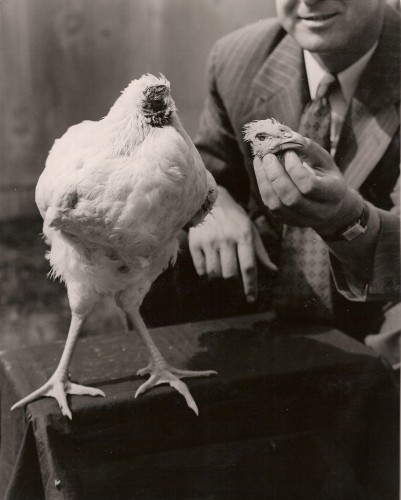 “Miracle” Mike the chicken with his displaced head

Mike the Chicken (April 1945 – March 1947) was owned by farmer Lloyd Olsen of Fruita, Colorado. Mike became a legend on September 10, 1945, when Lloyd’s wife sent the farmer out to the barnyard to get dinner. Lloyd selected a tasty-looking chicken and brought the axe down on its neck, chopping its head clean off.

But, to his surprise, the now headless chicken did not die.

Without a head, it was still able to balance on a perch and walk clumsily. It even attempted to preen and crow, though it obviously couldn’t do either without a head.

The chicken survived his execution, so Olsen decided to pardon him.

He named him Mike and began caring for him, feeding him a mixture of milk and water with an eyedropper. 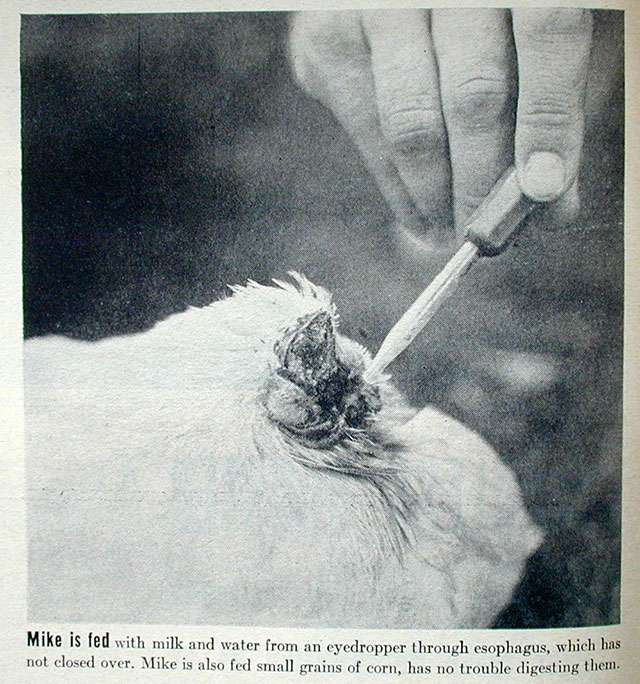 Once he got used to new and unusual center of mass, Mike could easily get himself to the highest perches without falling.

His crowing, though, was less impressive and consisted of a gurgling sound made in his throat.

Mike also spent his time preening and attempting to peck for food with his neck.

Mike began touring with sideshows, and was photographed for both Time and Life magazines. He was on display to the public for the admission price of twenty-five cents. At the height of his popularity, he was earning $4,500 a month.

His success resulted in a wave of copycat chicken beheadings, but no other headless chicken ever lived more than a day or two.

The Olsens were staying at a motel in Phoenix while traveling home from the latest tour, when Mike started choking in the middle of the night.

To their horror, the Olsens realized the feeding and cleaning syringes used to keep Mike’s throat clear had been inadvertently left at the sideshow the day before.

They were unable to save him.

After living for 18 months without a head, Mike the Headless Chicken only finally succumbed to death because he couldn’t swallow. 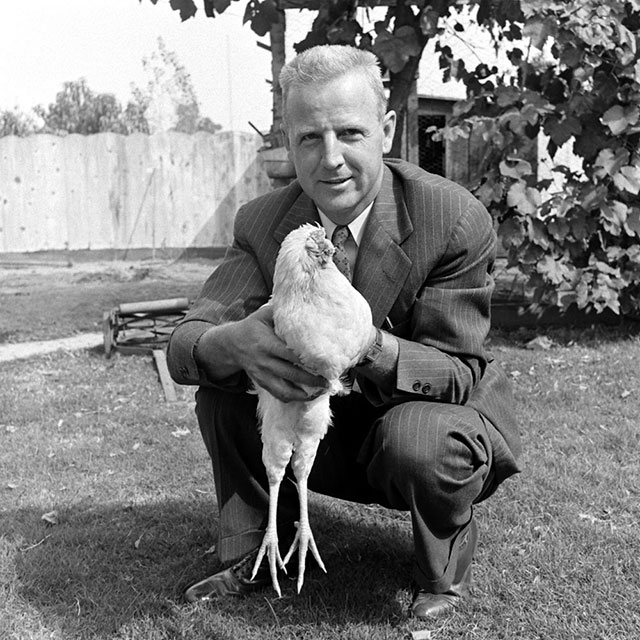 How did Mike survive without a head?

After his death, it was determined that the axe had missed Mike’s carotid artery, and a clot had prevented the chicken from bleeding to death. Although his head was severed, most of his brain stem and one ear were left on his body.

Since basic functions such as breathing and heart-rate, as well as most of a chicken’s reflex actions, are controlled by the brain stem, Mike was able to remain quite healthy in his new life as the famous headless chicken. 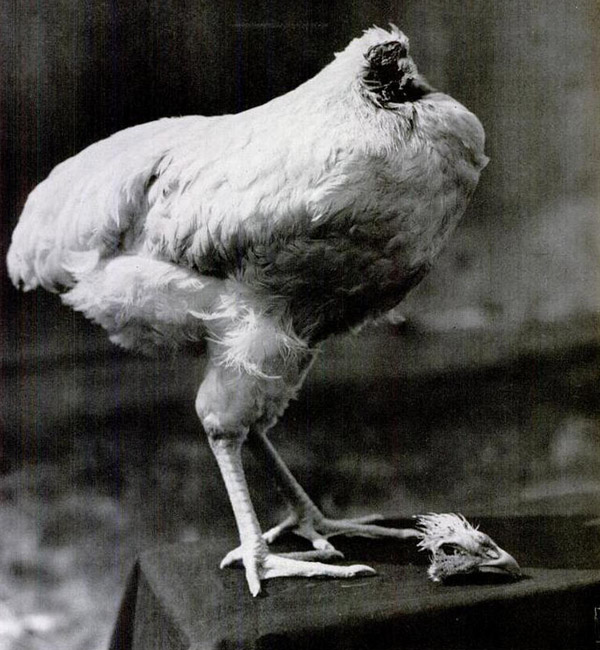 This is disgusting. Fascinating, yes, but the height of animal cruelty in every form.

“…if you eat meat…” says the chicken killer at the end. Well, therein lies the irony—not everyone thinks it is the human prerogative to eat the other denizens of the planet as a discretionary food item—I sure don’t. My 12 hens, 2 roosters and 4 ducks have a fine life being my companions and living to a ripe old age. As Mark Twain remarked—“It is just like man’s vanity and impertinence to call an animal dumb because it is dumb to his dull perceptions” Yep—man thinks awfully highly of himself in order to justify his bullying behaviors.

I thought roosters crowed in the morning. Why would anyone want to cut the head off a rooster? WTF?

wow thats so cool when my friend does it she cuts the brian of too! so cool

Is this, uh, true? Bizarre. Fun story, though.

I went to Fruita on business and they have flyers about the town at the taco bell etc… and Mike is featured on them.

I remember that we had a similiar event with a rooster when I was a kid. It didn’t live very long, 24 hours or less, but the fact that it di astounded me, even at an early age.

More from the Sideshow