In recent years, research by Jim Vieira and others into historical claims of giant human skeletons has reinvigorated the interest (and controversy) in a topic that is widely discounted as pseudoscience.

My interest in the subject began where it has for many – with the mention of giants in the ancient texts commonly referred to as the book of Genesis. It is easy to disregard these antediluvian tales of an extraordinary race of giants produced through the coupling of celestial beings with human females. When these stories were first told, humanity was still huddling in dark caves and making offerings to the various gods and spirits who governed their fates.

However, stories of giants are not exclusive to archaic origin stories fabricated by ancient cultures to make sense of a world without scientific understanding.

It seems that around the turn of the century, human skeletons measuring unnatural heights were being unearthed all over America, often from the burial mounds of an unknown people we call Effigy Mound Builders.

If the media of the time is to be believed, Wisconsin has yielded several unique and significant clues to the giant skeleton mystery. This may be due to the numerous animal effigy mounds all across the state, as well as a large population of Middle Mississippian mound builders who flourished in the area for four hundred years before they vanished. 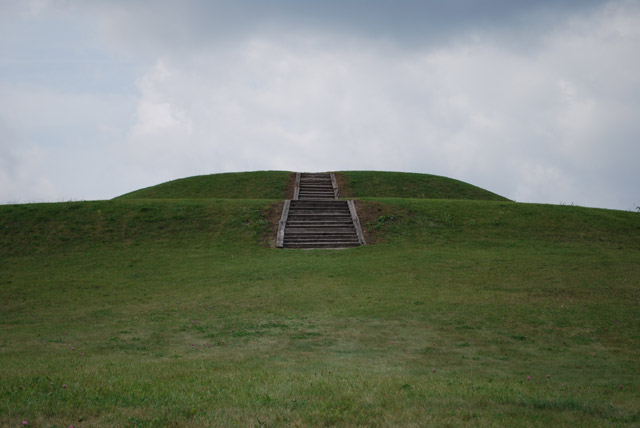 The remnants of a city built around a large central mound was discovered near Madison in 1835. The city, known as Aztalan, is believed to have flourished from 900-1300, possibly serving as a northern outpost for the much larger city of Cahokia in present-day Illinois.

Most of the Aztalan mounds were destroyed in the late 1800s, whatever relics to be found taken by treasure hunters. One disturbed mound was found to contain the remains of a young female now called the Princess of Aztalan. She was found to have a slight deformation in her spinal column, which may have caused her to be more highly regarded. She was wrapped in belts of seashells, some coming from as far away as the Gulf of Mexico.

Though she was of average height, the princess is one of only a few burials discovered in the area, which include a headless male and five cremated remains. There are rumors of a giant skeleton unearthed in the area, but I haven’t found any reports to corroborate it. 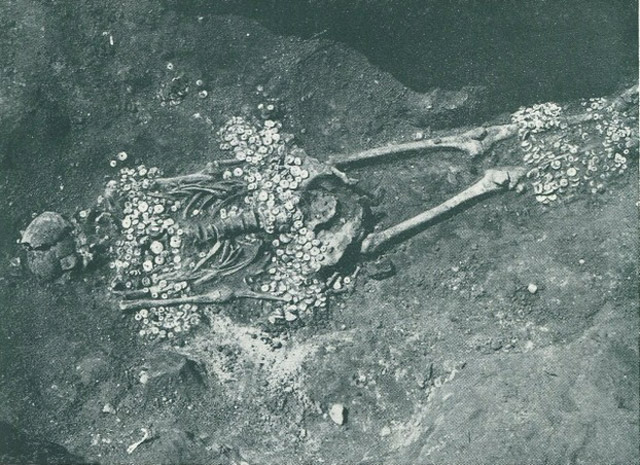 Though not a giant, the Aztalan Princess is unique amongst Wisconsin mound burials.

In 1891, the New York Times reported that Smithsonian scientists excavating the Aztalan site had discovered three pyramid-shaped mounds in nearby Rock Lake, which are believed to have been built by the inhabitants of Aztalan.

A New York Times article published December 20, 1897 reported the discovery of a giant human skeleton in the largest of three recently discovered mounds in Maple Creek, WI. The article states the skeleton measure over nine feet from head to foot and the skull was “as large as a half bushel measure.” Tempered copper rods and other relics were found with the bones.

The two remaining mounds were going to be “excavated soon.” What was found in them, and where is the giant now?

The May 4th, 1912 edition of the New York Times reported what might be one of the strangest giant skeleton discoveries of all. An excavation of one large mound on Lake Fawn Farm near Lake Delavan revealed the skeletal remains of eighteen individuals measuring between 7.6 and 10 feet. The “heretofore unknown race of men” were found to have six fingers on each hand and six toes on each foot, as well as double rows of teeth in their large, elongated skulls.

“From directly over the eye sockets,” the article states, “the head slopes straight back and the nasal bones protrude far above the cheek bones. The jaw bones are long and pointed, bearing a minute resemblance to the head of the monkey. The teeth in the front of the jaw are regular molars.”

It goes on to say that other remains, presumably of women, were found with smaller heads but similar characteristics. The remains were found embedded in charcoal and covered with layers of baked clay to shed water from the sepulchre.

I was fascinated by Lizard Mound County Park, just outside of West Bend, WI, ever since my first visit when I was very young. At the time, an installation constructed by the Milwaukee Public Museum provided a window into one mound, showing the bones and artifacts as they were originally buried.

Though those bones were of normal size, larger bones were accidentally unearthed by farmers in another nearby mound. Read the account of that find: Giant Skeleton Unearthed by Wisconsin Farmers in 1912

This snippet of a newspaper so far is the only thing I have found on the topic of a giant skeleton being found near Fond du Lac, Wisconsin.

Have you heard any stories of strange giant skeletons being found in Wisconsin?
Tell me about it in the comments below.