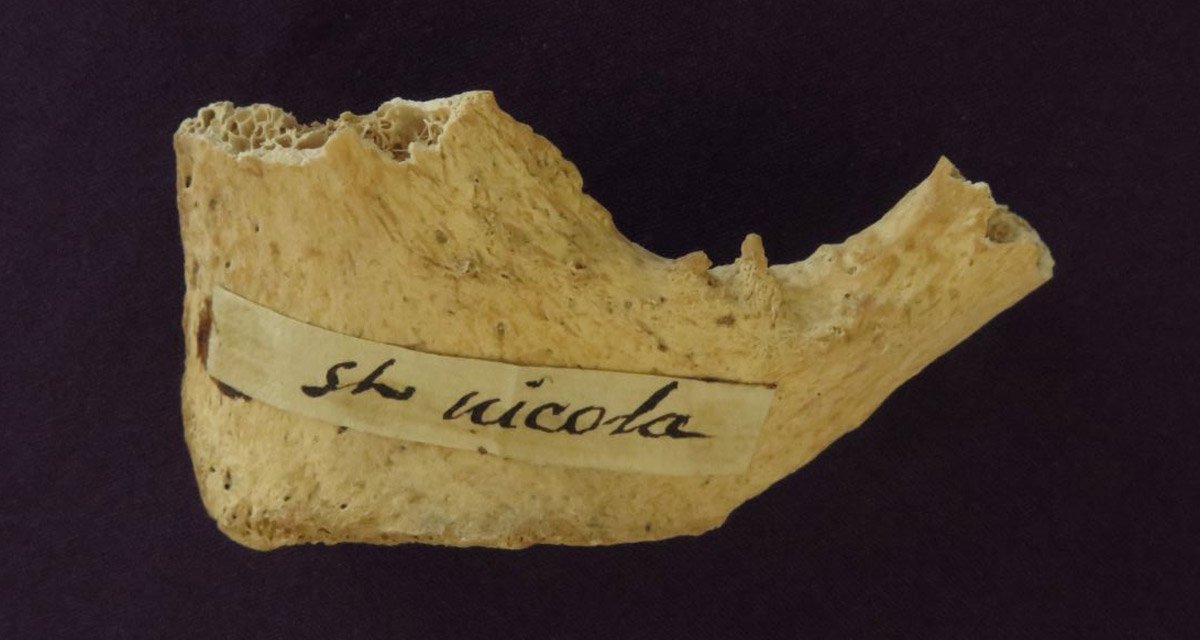 A fragment of bone believed to be a relic of St. Nick, the historical figure who inspired our modern Santa, has been dated to the 4th century.

When we collect human remains, we’re considered weird and creepy. When the Catholic church does it, the bones are venerated as holy relics belonging to some historical character said to have lived a saintly life performing good deeds. But often, as evidenced by the history of the catacomb saints, no one knows who those bones actually belong to.

In this case, the bones in question are said to be the remains of the 4th-century figure known as St. Nicholas, whose legendary generosity inspired our modern day Santa Claus. As is often the case, there are several churches claiming to possess the remains of jolly old St. Nick.

The Basilica di San Nicola in Bari, Italy, is the most well-known, where remains stolen from Myra, a small town in what is now Turkey, were interred in the crypt in 1089, and left untouched until 1953. When the tomb was opened, an oily liquid was found to be leaking from the bones. The manna of Saint Nicholas, as it is known, supposedly has healing qualities that eager crowds gather to receive during an annual celebration. 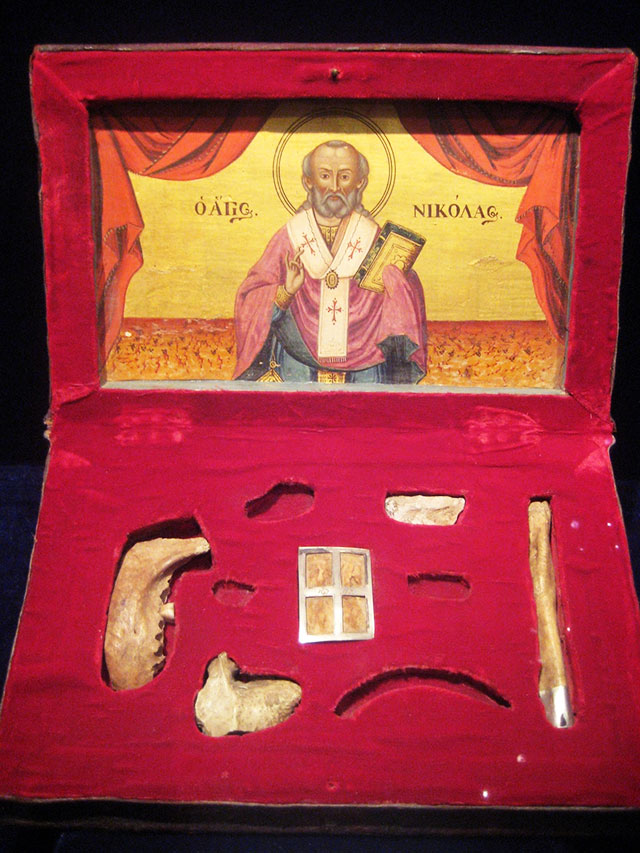 The bones of St. Nicholas in Bari

Chiesa di San Nicolo al Lido in Venice also claims to have the bones of St. Nick. In Venice, the Church of St. Nicholas has fragments left behind when the bones were stolen from Myra. And to complicate things even further, a team of Turkish archaeologists recently discovered what they believe may be the tomb of Nicholas beneath a church in Antalya, the region where he is believed to have lived.

“His alleged teeth and finger bones are cherished relics in over a dozen churches in places including Russia, France, and the Palestinian territories,” Brian Handwerk writes for National Geographic. “Notable among them was New York City’s St. Nicholas Orthodox Church, which was destroyed during the collapse of the World Trade Center on September 11, 2001. The relics were never recovered.”

A fragment of pelvis residing in St. Martha of Bethany Church in Morton Grove, Illinois, is also said to belong to the saint. And, unlike other remains, recent tests support the claim.

Oxford has completed radio carbon testing of the bone, which was originally from a church in France. The results dated it to the 4th century. Nicholas is believed to have died around 343 AD, so that places the bone in the correct era. This is of particular interest because typically, when relics are tested, they turn out to be much too recent. These results at least show that this bone is from the right period of time, making its authenticity more likely.

“And the researchers now want to use DNA testing to see how many bones are really from a single individual – and how many might be linked to the bone tested in Oxford,” BBC reports. “The Oxford team are interested in whether the part of the pelvis they have tested matches the relics in Bari, where the collection does not include a full pelvis.”

The latest episode of Ask a Mortician sets out to ruin Santa with a macabre look at the history of our modern Christmas icon.


Everyone’s favorite mortician Caitlin Doughty (Smoke Gets in Your Eyes) teams up with Elizabeth Harper from All the Saints You Should Know to ruin our modern idea of Santa Claus just in time for Christmas. Saint Nicholas, a Turkish bishop born around 270 AD, was known for giving money to poor families so their daughters didn’t have to be prostitutes. At one point, according to legend, he also raised three butchered boys from the dead.

And now the bones of St. Nick, the historical inspiration for our beloved jolly fat man, can be visited in various locations all over the world. So yeah, he’s dead, and probably not coming down your chimney any time soon. Happy holidays! 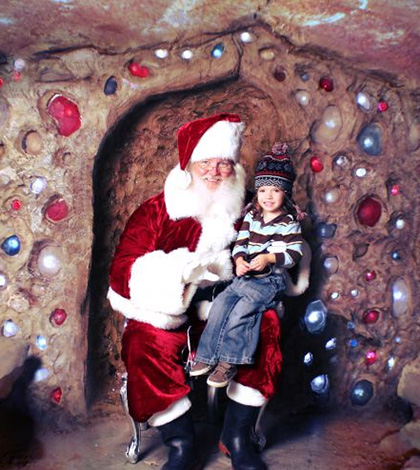 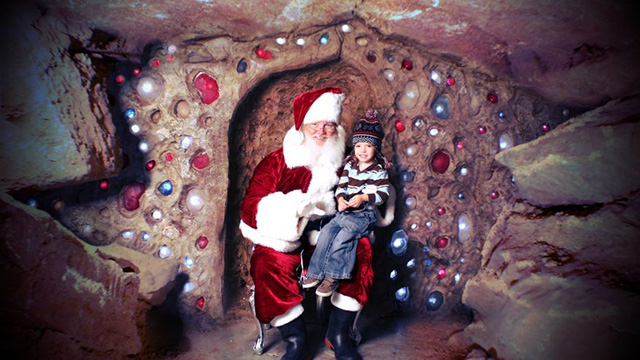 If you visit Ruby Falls, Tennessee during the holidays, you will find a Sugar Plum Fairy Village, elves and Santa Claus himself in the depths of America’s deepest commercial cave. In Kennebunkport, Maine Santa parades around town with elves in lobster costumes for Christmas. At the Tennessee Aquarium in Chattanooga, you’ll find the jolly fat man in scuba gear swimming with the fishes.

Do you know of any other weird places to visit Santa?
Share it in the comments below. 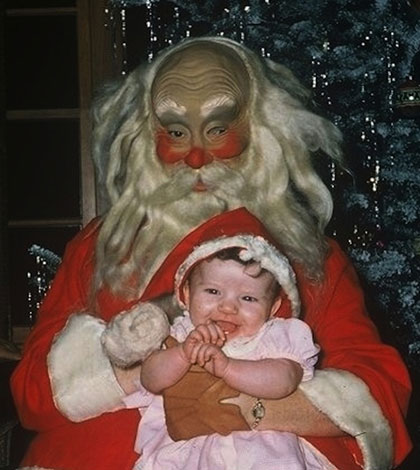 Modern Christmas traditions have shunned the Krampus for being too dark and scary, yet we insist on putting children in the laps of creepy old men in big red costumes and beards every year.

Here are some creepy vintage Santa photos sure to put trauma in your stocking this year. 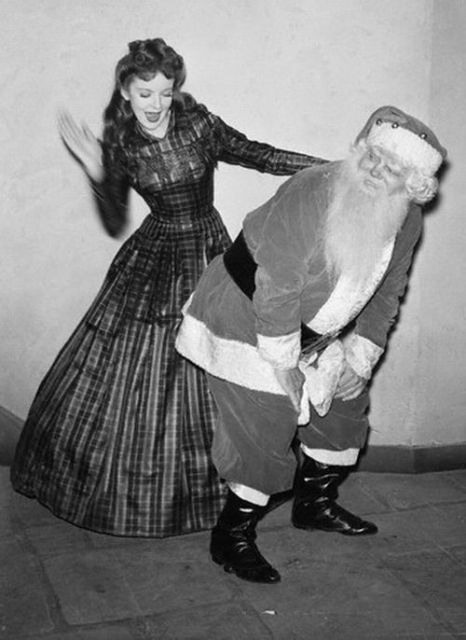 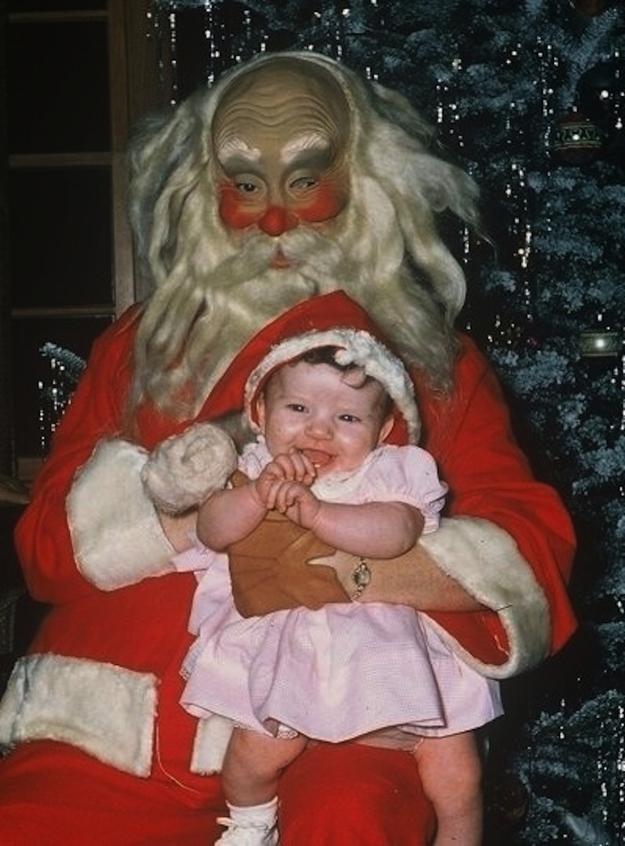 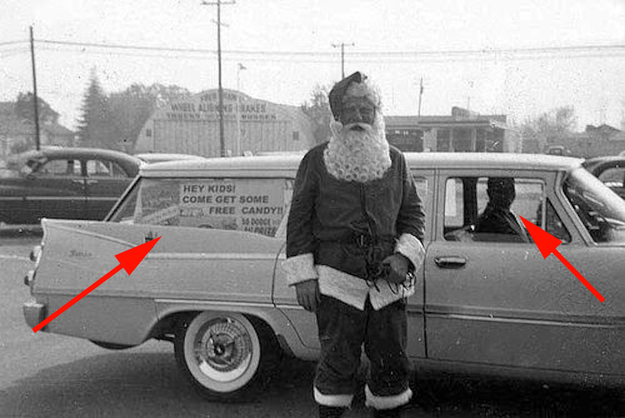 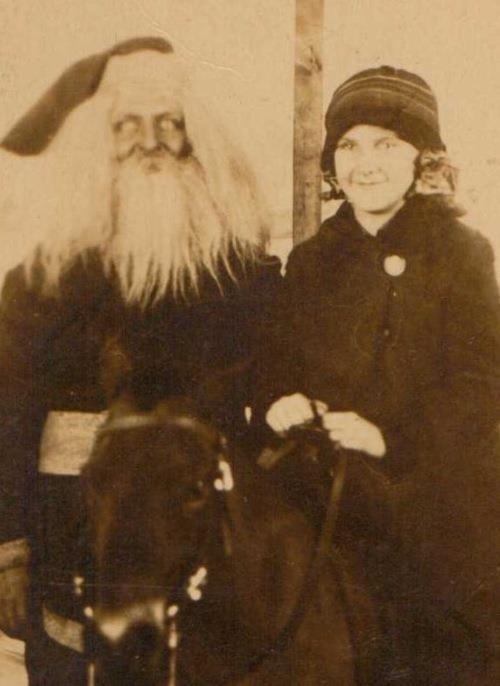 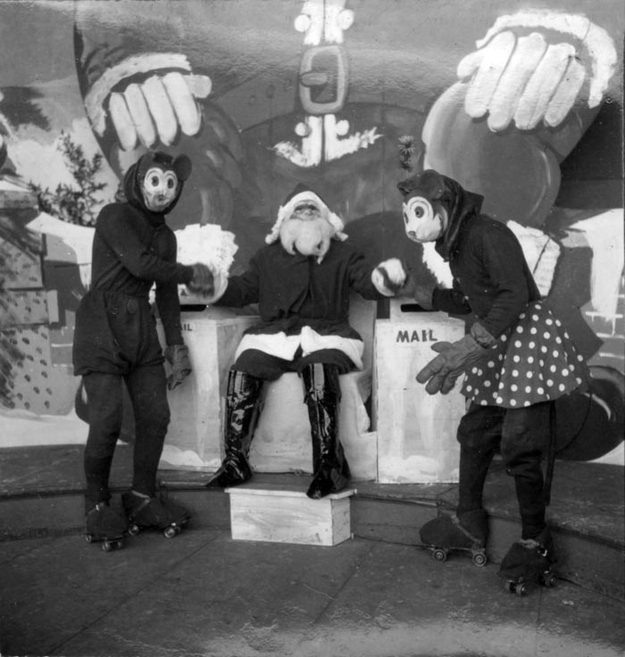 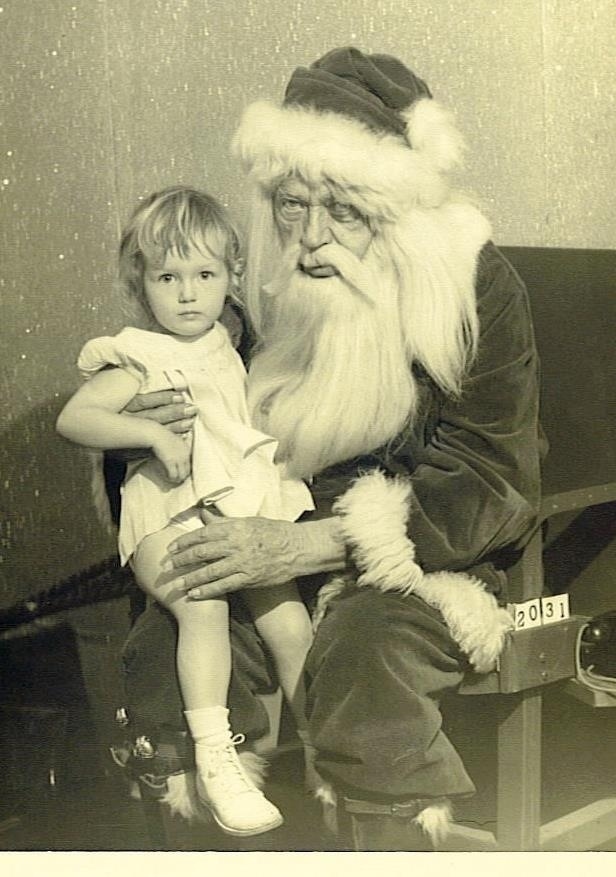 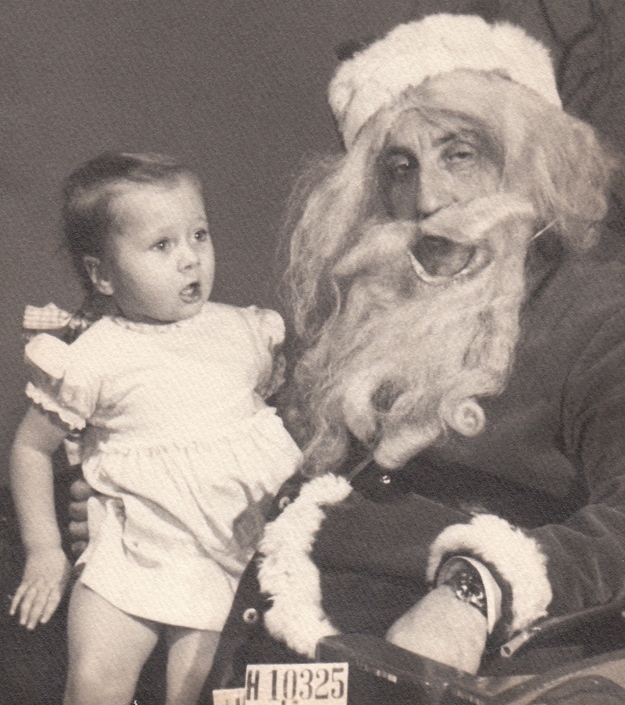 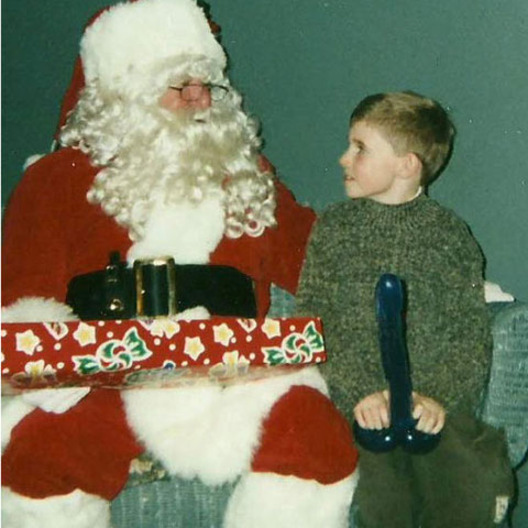 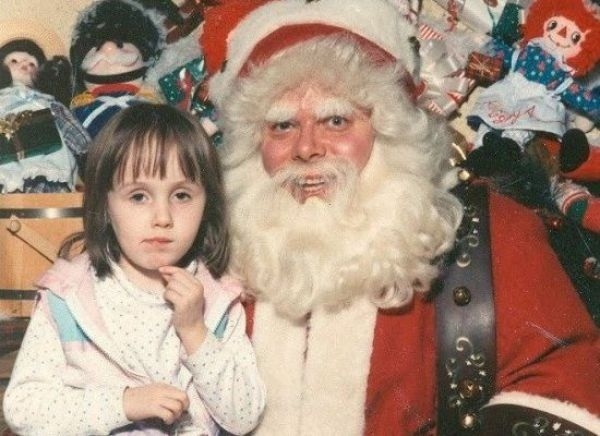 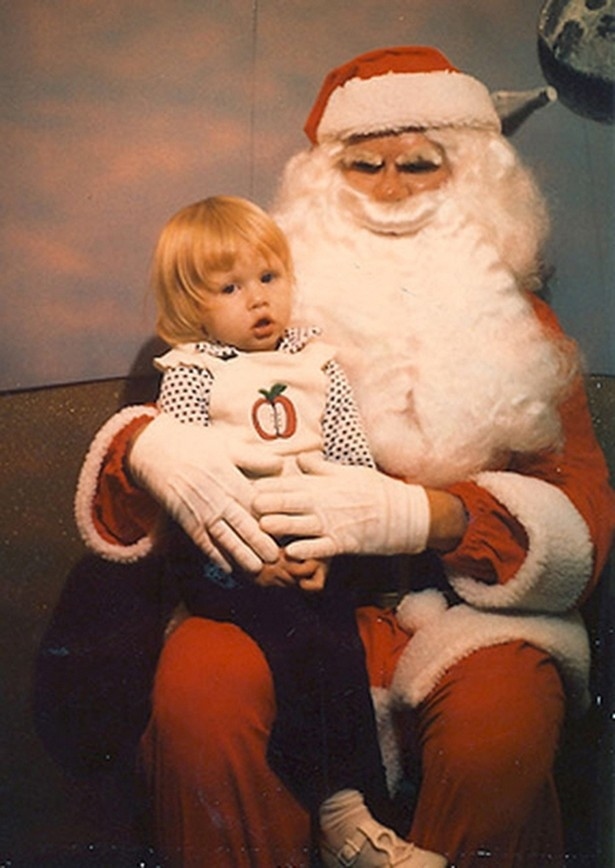 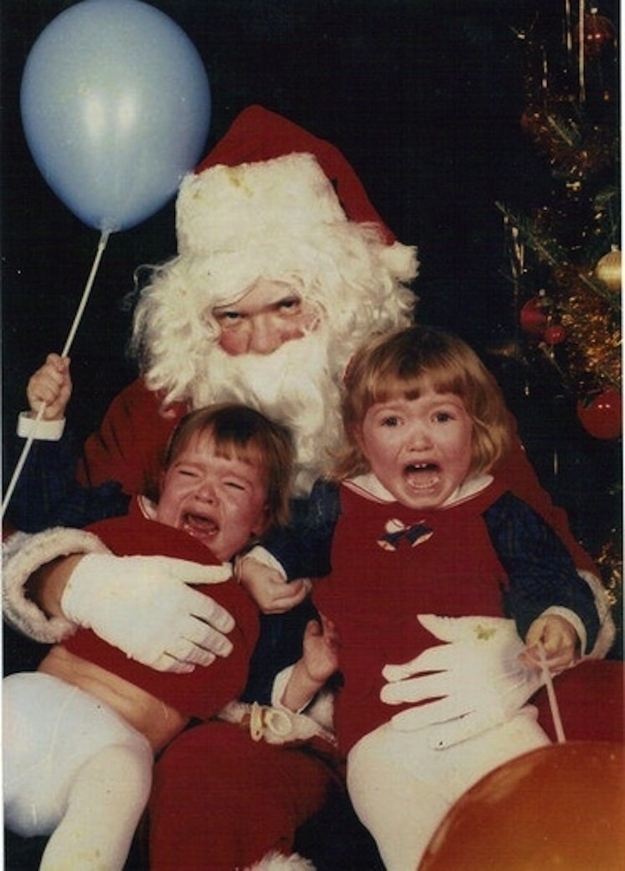 If that doesn’t sufficiently ruin your Christmas spirit the The Bones of St. Nick surely will. 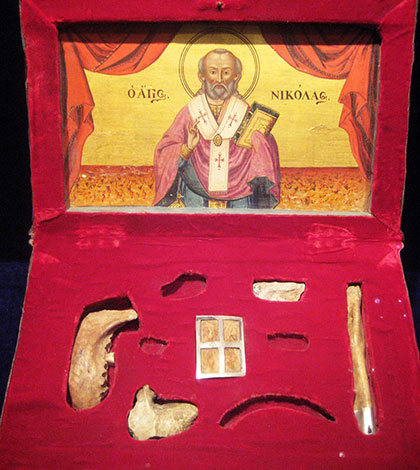 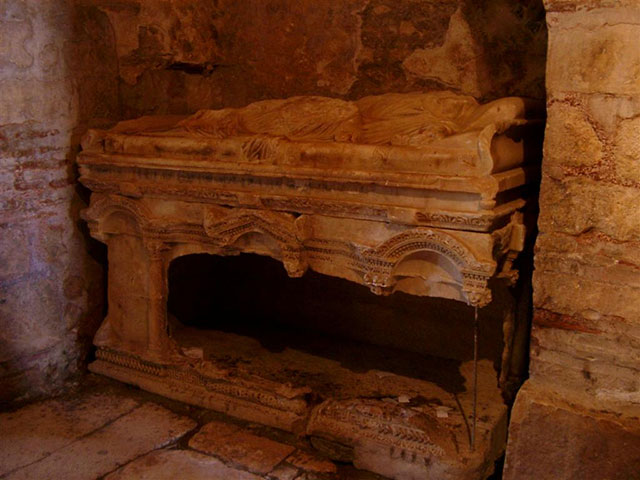 The tomb of St. Nicholas, the historical inspiration for Santa Claus, in the ruins of a 4th century church in Turkey.

The ruins of an ancient Byzantine church in Demre, Turkey hold what is believed to be the original tomb of St. Nicholas, the 4th century bishop whose name has become synonymous with gift-giving.

Nicholas’ miraculous and charitable acts were well-known in his time. It is said that he made anonymous donations of gold coins to a poor family, saving the daughters from a life of slavery and prostitution. A medieval tradition grew around this story, leading to the gift-giving custom of St. Nicholas Eve on December 5th.

In another legend, a butcher was luring children into his home to murder them, cut them up and sell them in barrels as food during a time of famine. When an angel told St. Nicholas of these atrocities, the bishop went to the butcher’s home just in time to restore life to three boys before they could be eaten.

Though his name is not included in the records, history claims the good saint attended the Council of Nicea in 325. He was apparently kicked out for slapping the heretic Arius.

Upon his death, commonly accepted as December 6 of some year between 330 and 352, St. Nicholas was interred in the church where he served, in what was then called Myra. He became known as the patron saint of sailors, travelers, thieves and children. Christians made pilgrimages from all over to visit his tomb.

In 1087 his sarcophagus was broken open, the remains stolen by Italian merchants following an attack from Muslim invaders that damaged the church. The thieves took the bones to a cathedral in Bari, Italy, where they believed they would be safe.

The Relics of St. Nicholas can be seen today. Part of a mandible and other small bits of bone are on display in the Basilica di San Nicola in Bari. An oily liquid, known as Manna di S. Nicola or santa manna, is said to flow from them. It is highly valued for its supposed medicinal properties, extracted ceremoniously once a year on May 9th.

While our modern Christmas traditions are sadly devoid of cannibalism and prostitutes, the legends of St. Nicholas still pervade our holidays nearly 1,700 years later.

The name Santa Claus was derived from Sinterklaas, the Dutch name for St. Nicholas.