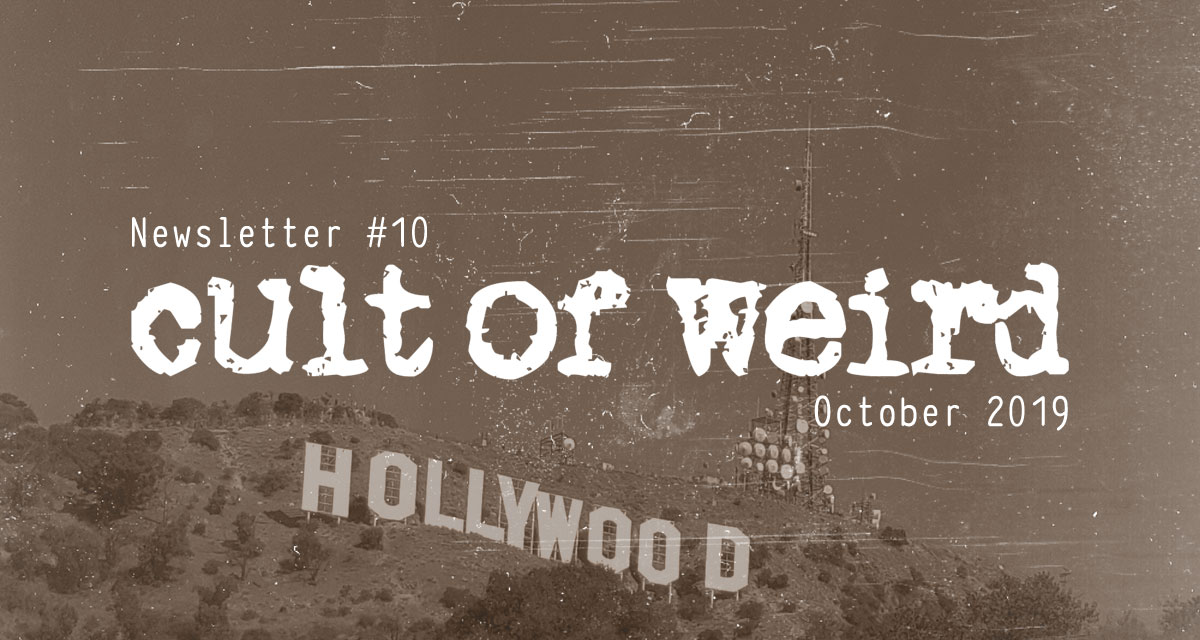 It’s been nearly 20 years since I visited the West Coast, so the moment I learned I would be spending time in and around Los Angeles to stand up in my best friend’s wedding at the end of September (it was beautiful and amazing, but I had to wear white, so don’t expect any photos of that), I began mapping out all the murder houses, oddities shops, and disturbing museums I’ve spent the last two decades researching and dreaming about seeing in person.

By the time I boarded the tiny metal sky tube bound for California with my kids, however, I decided they would probably enjoy the touristy things a bit more than gawking from the sidewalk at the Sowden House where some believe Elizabeth Short (the “Black Dahlia”) was murdered and mutilated.

I mean, my kids spend every day of their lives surrounded by skulls, taxidermy, and death ephemera. I drag them on detours to find graves of murderers and exorcists on the way to the grocery store. This is supposed to be a vacation—I’ll cut them some slack.

We’ll take some photos by the Hollywood sign – where an actress committed suicide by throwing herself from the top of the “H” in 1932. We’ll stroll down the Walk of Fame past buildings haunted by the stars of Hollywood’s Golden Age, like the Roosevelt Hotel. Since they’re missing school, we’ll get some prehistoric education at the La Brea tar pits – there’s nothing weird about educational dead things, right? We’ll hit the arcade on the Santa Monica pier where my favorite part of my last visit in 2000 was a one-legged seagull with a twitchy nub where the other should have been.

Back in 2000 I also stumbled into the filming of an MTV game show I don’t remember the name of and can’t seem to find any evidence of online. The female host was getting covered in cockroaches or something, and I had a conversation with the male host in which I confessed I didn’t watch his show. Charming, as always. I have a knack of inadvertently insulting famous people.

If that show wasn’t just a figment of my imagination, if it actually exists and that moment really happened…there might be footage out there somewhere of a 20-year-old goth kid from the desolate wastes of Wisconsin with hair bleached, dyed red, and gelled into insect-like antennae, hanging out on the Santa Monica pier.

I didn’t manage to get into much weirdness this time around. But I did almost get recruited into Scientology, so it wasn’t a total loss.

Photos From the Trip 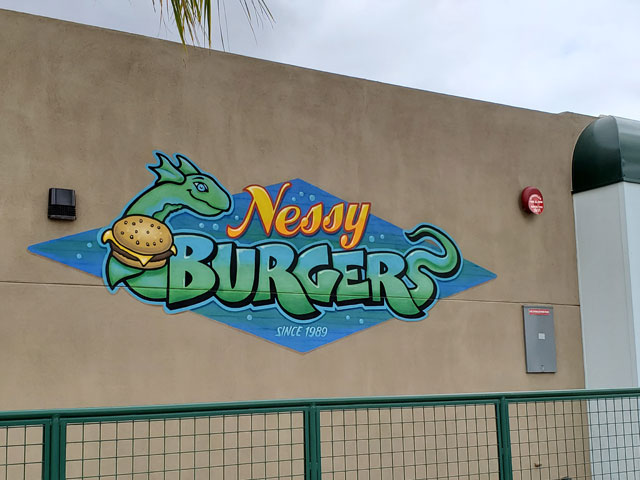 The wedding was held at a remote, fantastical private castle high in the mountains near Fallbrook, which my vegan readers or guacamole enthusiasts will be interested to know is the self-proclaimed “Avocado Capital of the World” according to the sign with a smiling, dancing avocado in a hat.

But more importantly, Fallbrook is the home of Nessy Burgers.

This is why no one has found the Loch Ness Monster. The food was great, but I’m still picking scales out of my teeth. 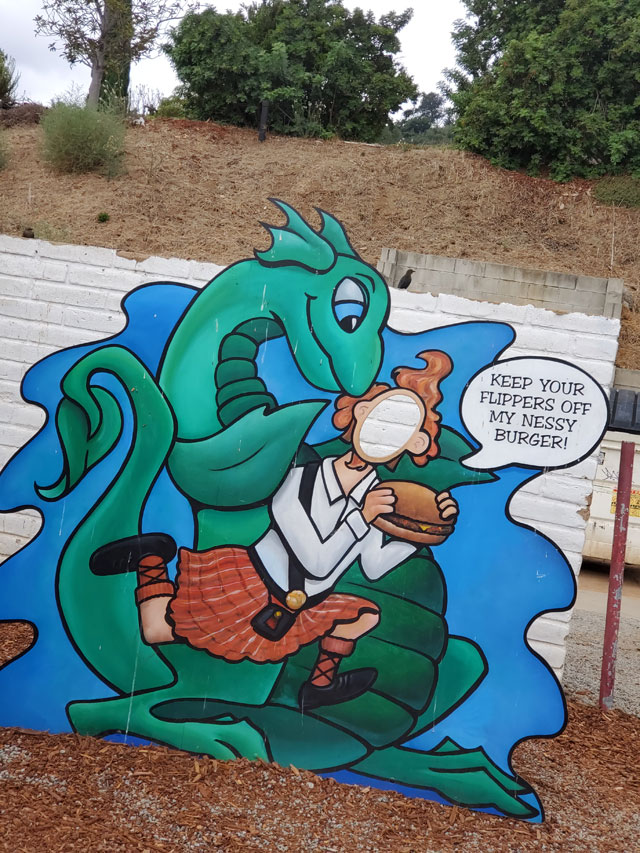 Nessy burgers are better enjoyed in a kilt, of course. 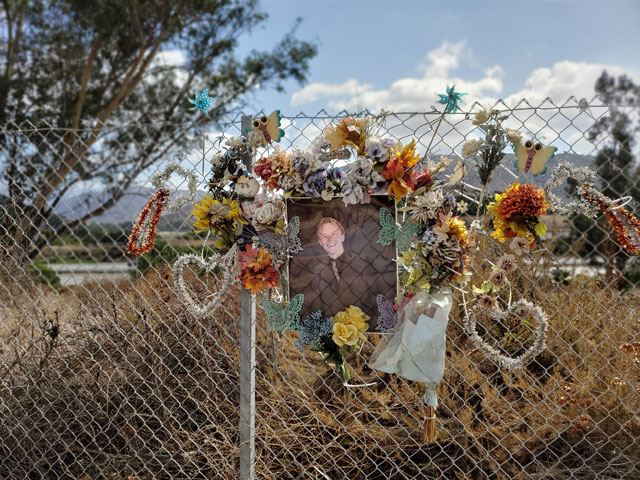 A roadside memorial near our hotel. 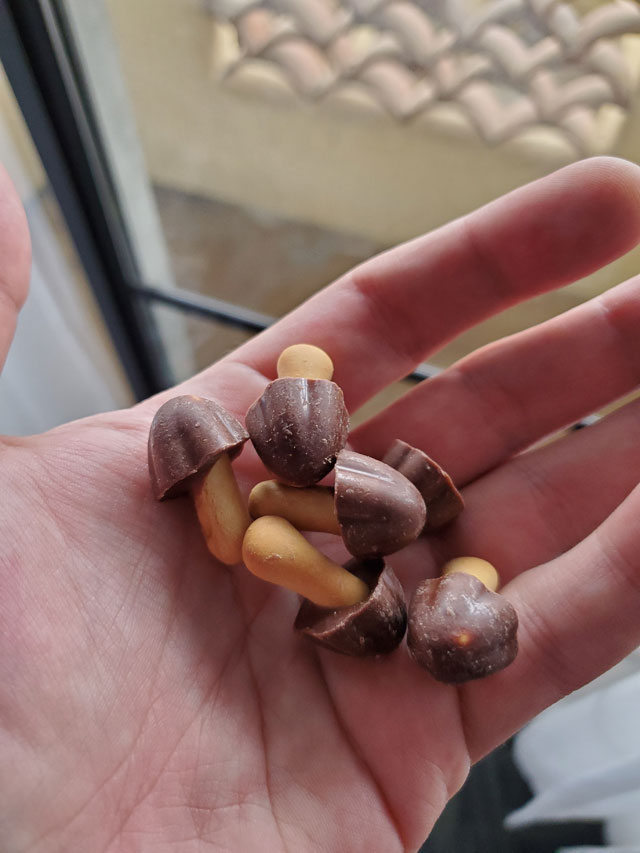 What the…? They didn’t even have any hallucinatory properties… 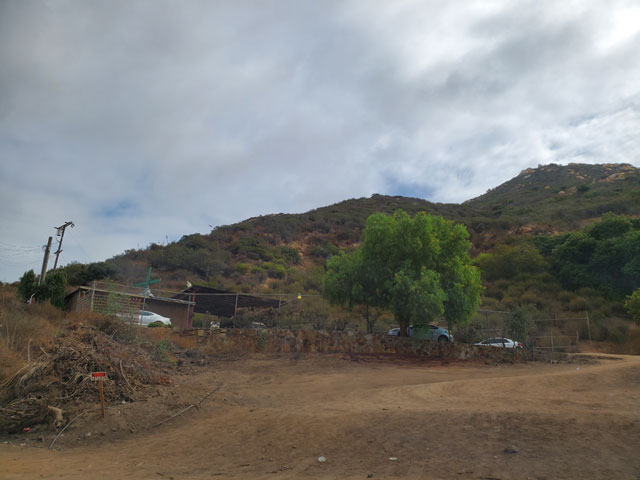 This dispensary had a bit of a Breaking Bad vibe, but we survived. 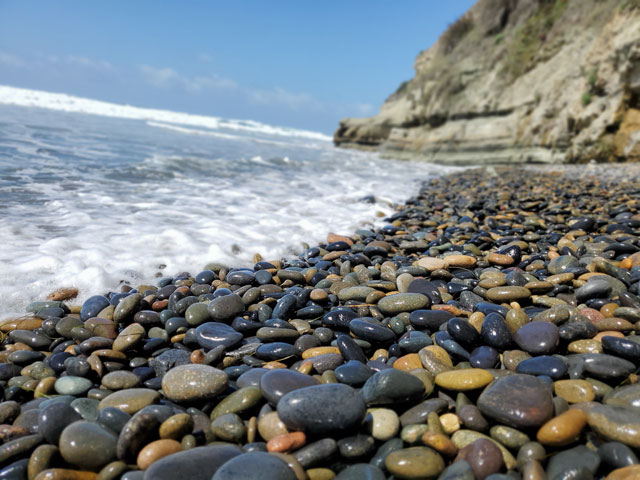 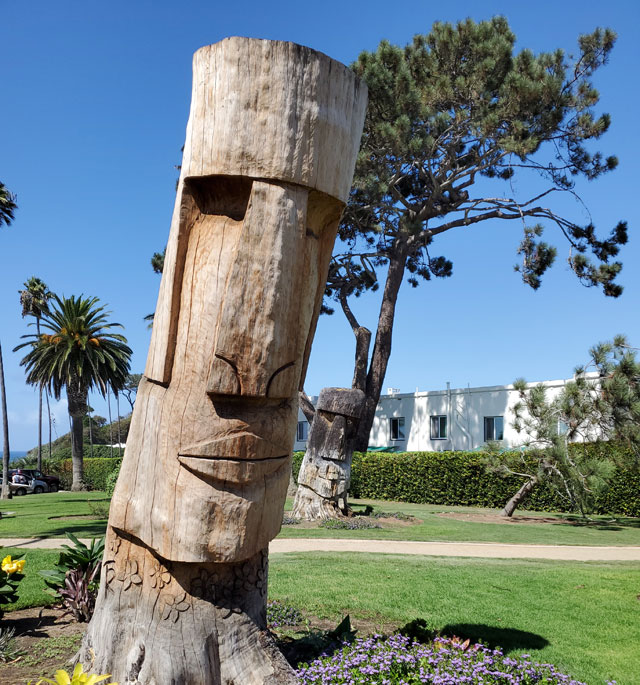 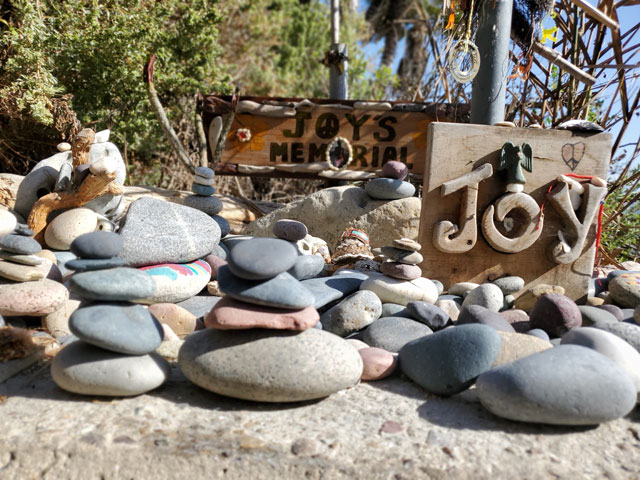 Joy Froding, a jewelry designer, painter, sculptor, and beloved member of Swami’s surf community, succumbed to a heart attack after riding “one of the best waves of her life” in 2015. Her friends felt that she was the heart of Swami’s.

“It made me happy to know that she stuck with surfing and really made it her lifestyle and that a beautiful wave was her last memory of her life,” a friend who taught Joy to surf wrote after her death.

Now you can’t get down to the beach without passing by this memorial. 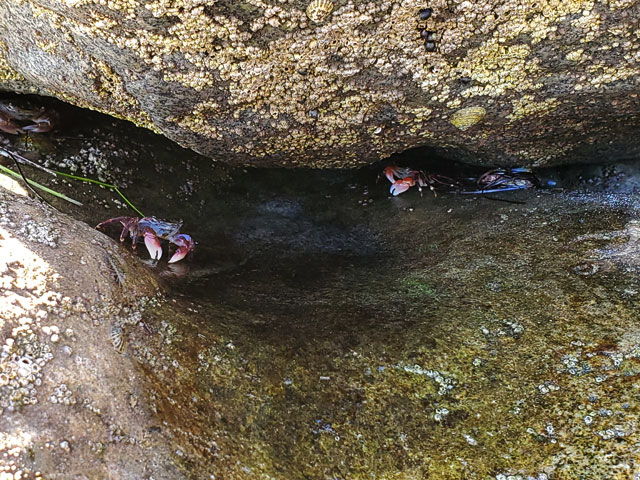 Found some crabs. They weren’t nearly as excited to see me as I was to see them. 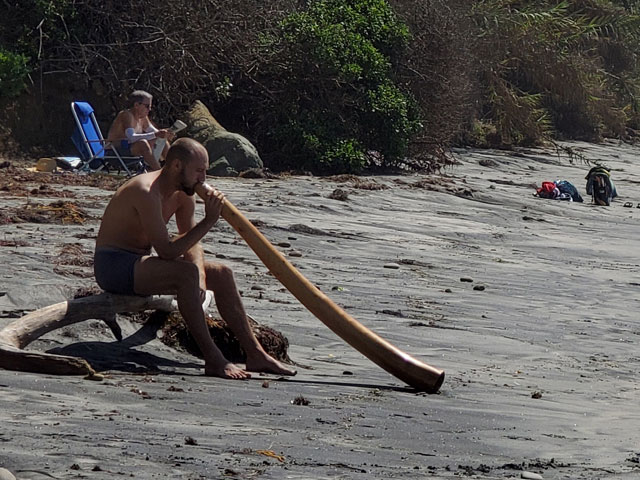 A guy casually blowing his digideroo on the beach. And a guy wearing a reverse t-shirt in the background? 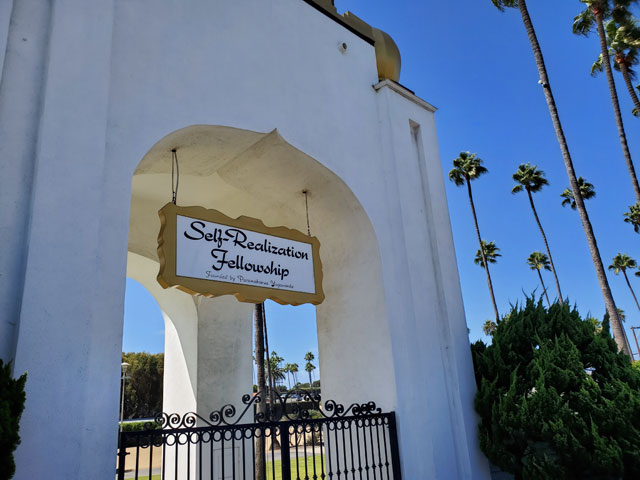 This is probably a cult. 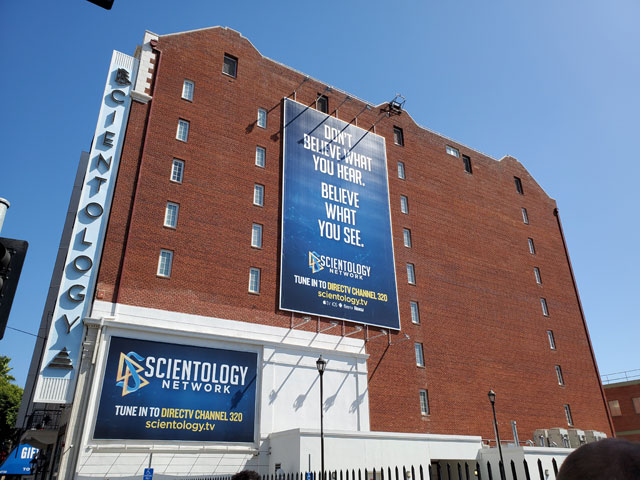 This is definitely a cult. 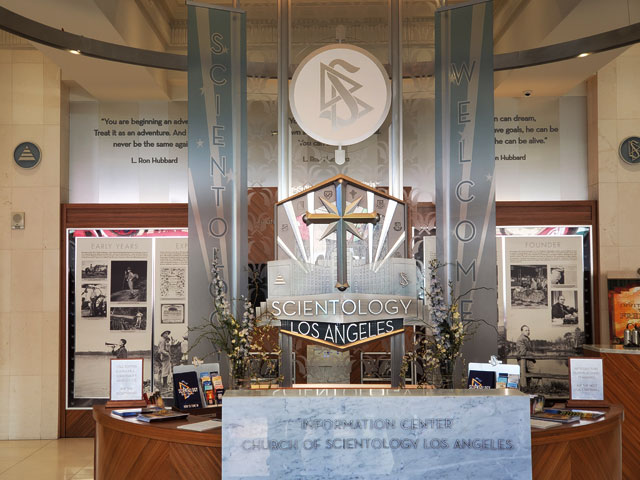 They gave me pamphlets and showed me a video about how Scientology isn’t bad. I took this photo from the sidewalk. Once I was inside they wouldn’t allow any photos.

I regret to inform you all that it seems I have body thetans. But don’t worry, once I start paying for auditing I’ll be clear in no time. 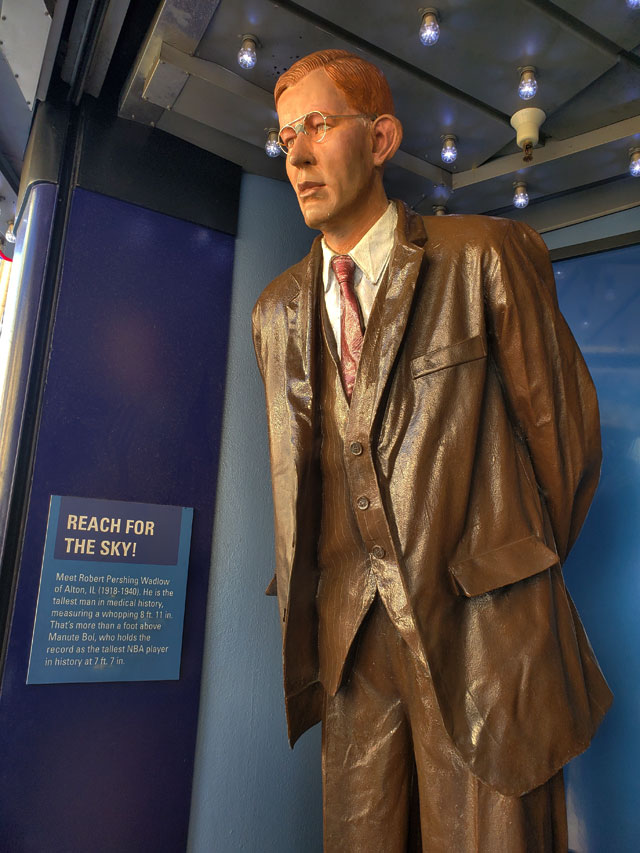 Statue of Robert Wadlow, the tallest man ever in recorded history, at Guinness World Records Museum in Hollywood. 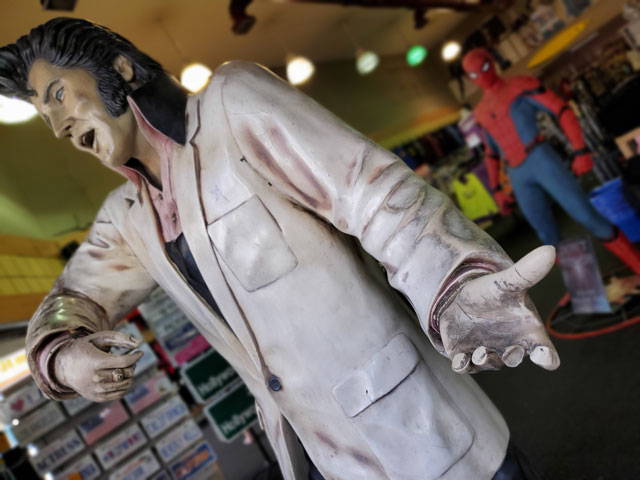 Where did his fingers go? 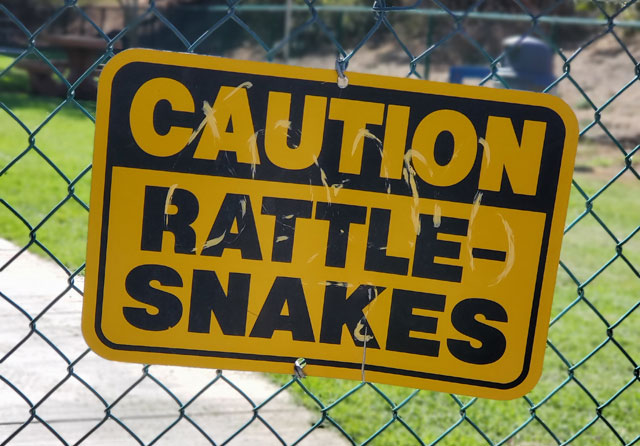 Rattlesnakes. In a children’s play area. This was at Hollywood Lake Park where everyone goes to get a good photo of themselves pretending to hold the Hollywood sign. 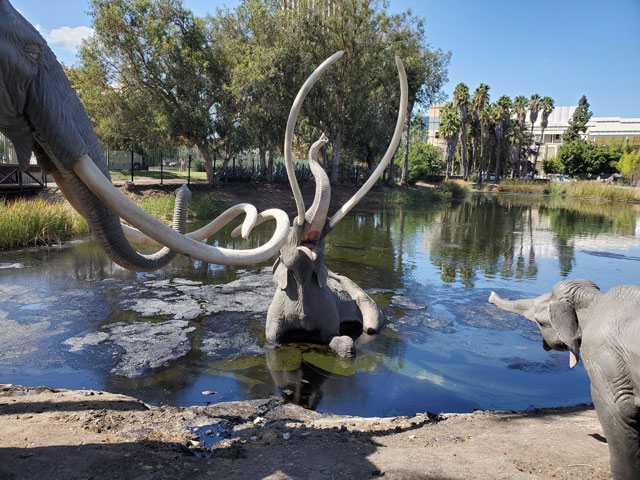 Columbian mammoth sculptures at the La Brea Tar Pits. Created by Howard Ball and transported from his studio to the La Brea Lake Pit in a trailer pulled by his Volkswagen Beetle in 1968. 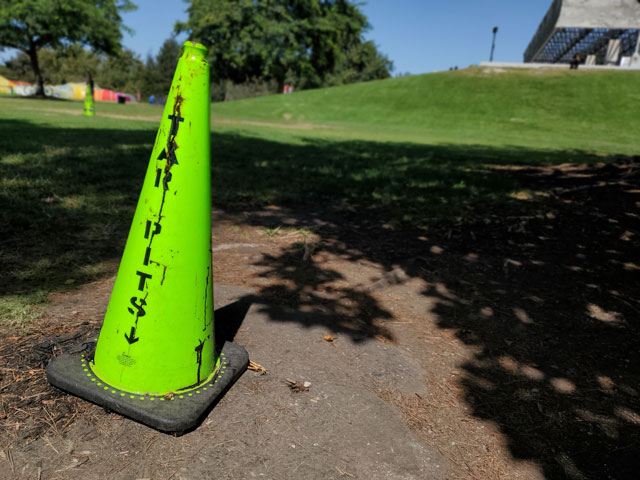 Road cones mark new spots where asphalt has bubbled up from the pits below. 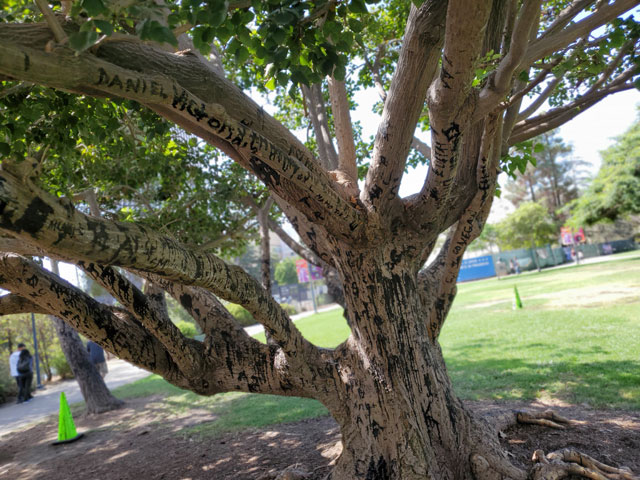 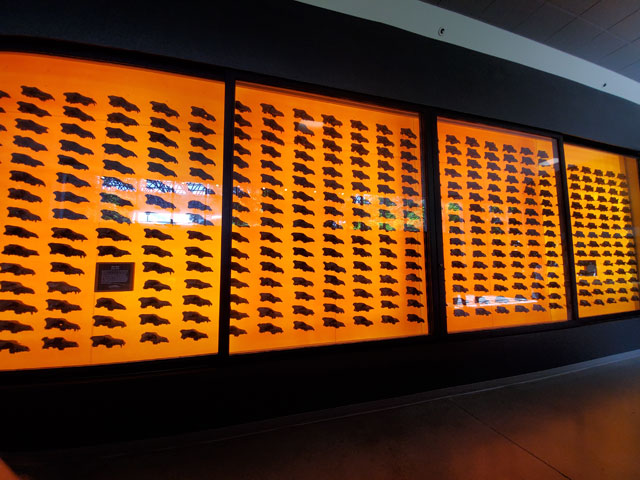 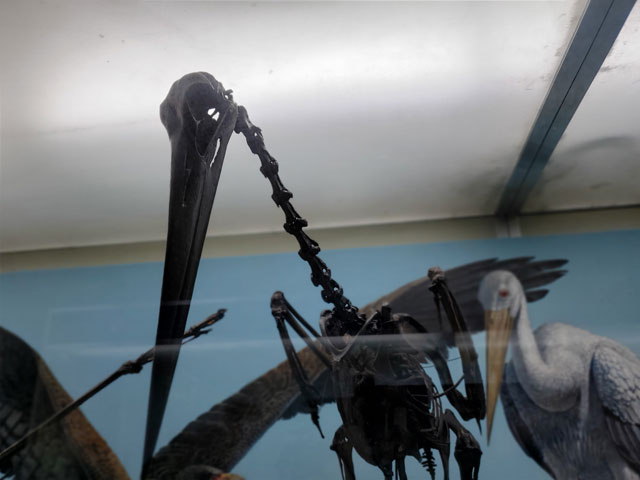 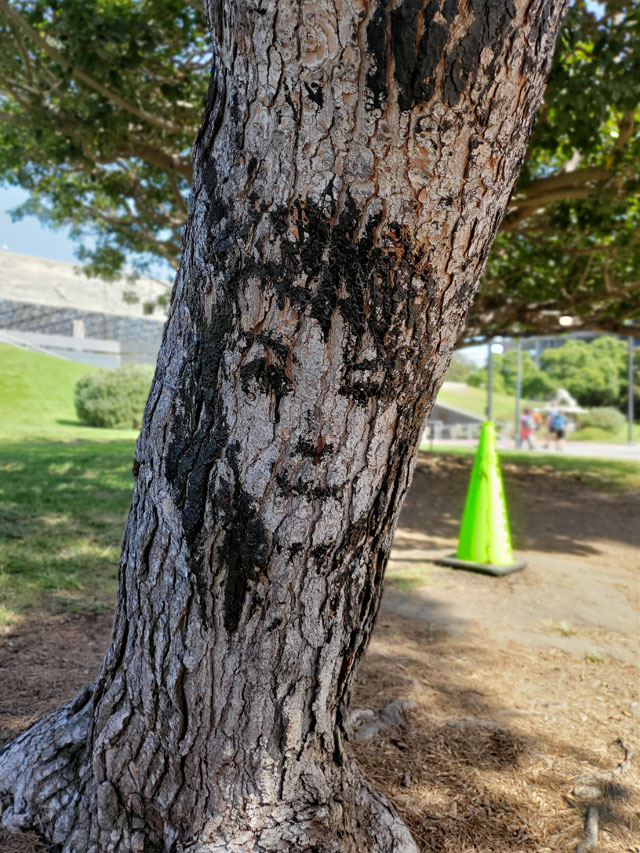 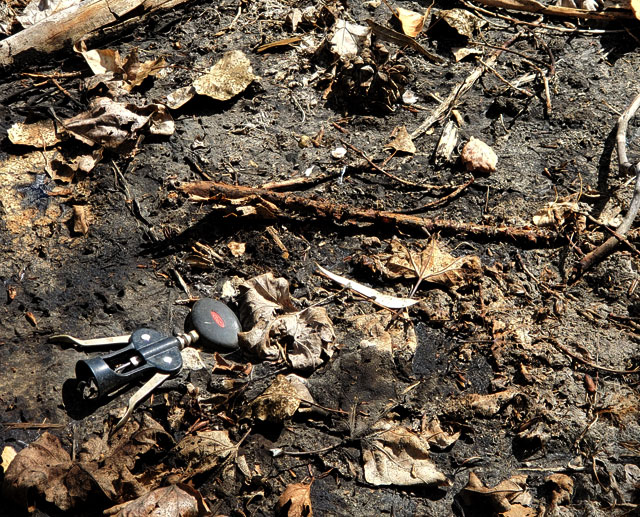 Fossil of an ancient corkscrew that became trapped in the tar pits hundreds of thousands of years ago. 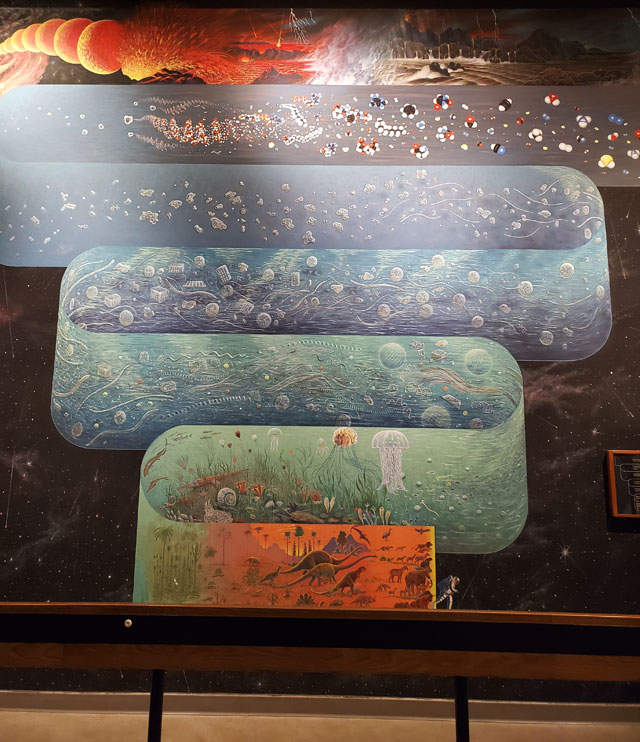 “Time Ribbon” or “The Evolution of Life on Earth” at the La Brea Tar Pits Museum is a mural of an 83-foot-long ribbon depicting the entire history of life on Earth beginning with the origin of the planet five billion years ago. Each inch represents about five million years. The story of primitive man to astronaut happens only within the last half inch. 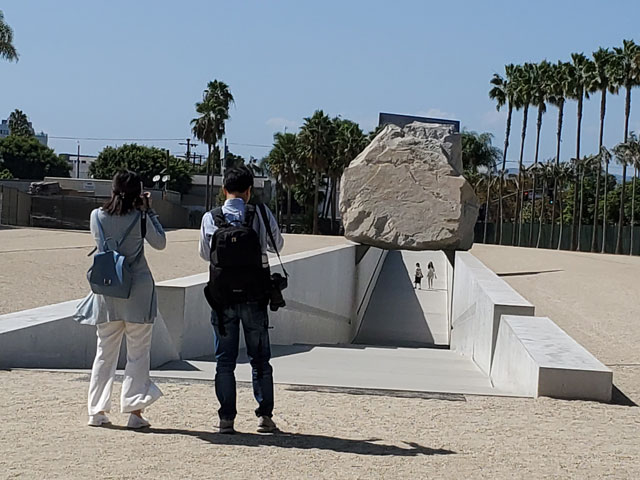 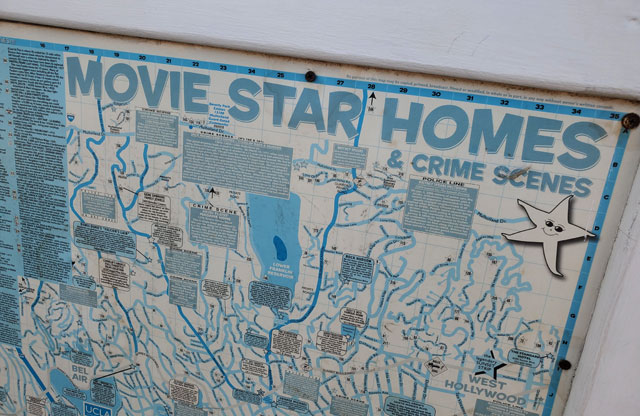 “The kids will thank you forever and definitely won’t be traumatized by a Hollywood murder tour,” that smiling star told me. 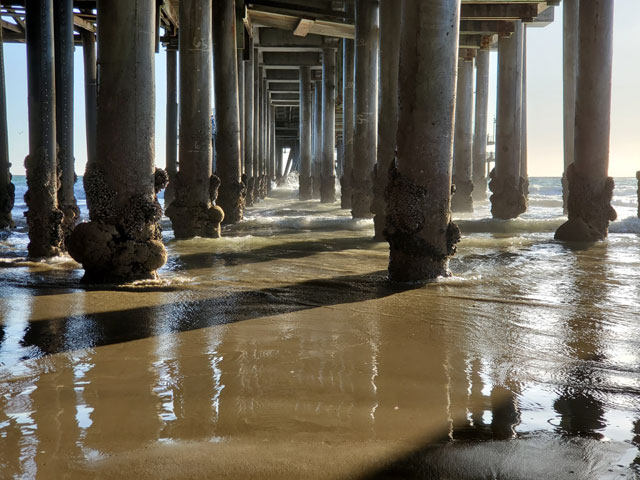 Beneath the Santa Monica pier. Living here when I’m old, poor, and homeless is my new retirement plan. 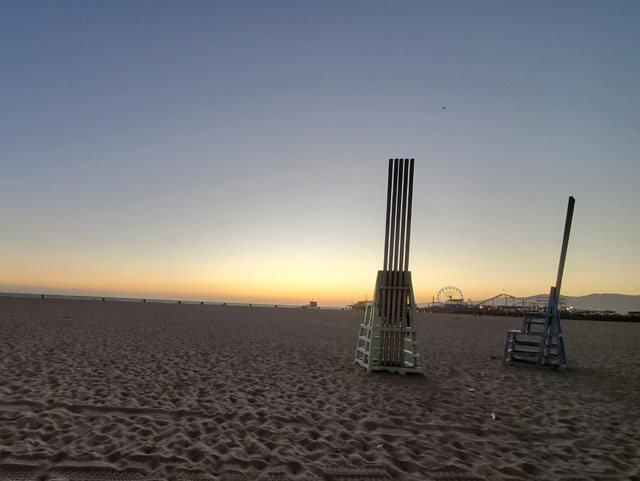 Sunset from the Santa Monica beach with the “Singing Beach Chairs.” The backs of the oversized chairs are aluminum tubes that produce low oboe-like tones when the wind blows off the ocean through them. They were created by Douglas Hollis and installed in 1987. All art created for Santa Monica beaches had to adhere to the guideline that it “must interact with natural phenomena.” 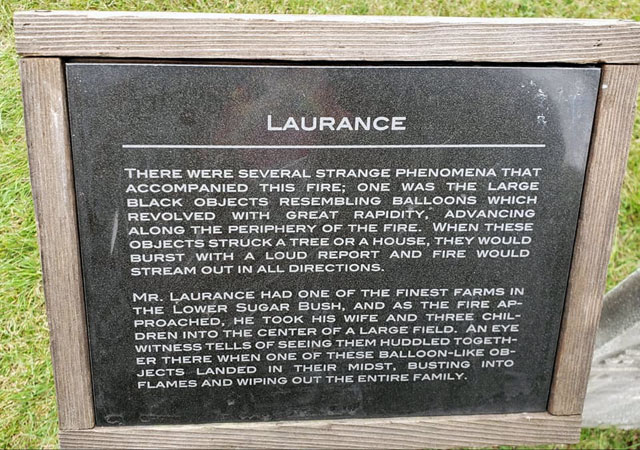 The Peshtigo fire ravaged northeastern Wisconsin on October 8, 1871. The firestorm (with reported “tornados of flames”) burned approximately 1,200,000 acres and killed between 1,500 and 2,500 people, making it the deadliest wildfire in American history. So many people died in the fire that there was no one left to identify them. More than 350 unidentified bodies were buried in a mass grave. But the tragedy was overshadowed by the Great Chicago Fire that occurred on the same day…along with several more fires in Michigan.

What caused all those fires?

In his 1883 book Ragnarok: The Age of Fire And Gravel, Igantius Donnelly proposed that the Earth had passed through the broken up remains of the Biela Comet. The comet was discovered in 1926 and predicted to pass by Earth in 1872 but never showed. According to Donnelly, the fragments of Biela could have entered our atmosphere and started the fires upon impact.

Numerous other strange phenomena was reported during the Peshtigo fire, including black balloon-like objects in the air that would burst into flames when they collided with other objects. Even today, the area is still ripe with supernatural activity, including shadow people seen on the streets of Peshtigo, and the only apparition of the Virgin Mary officially validated by the Roman Catholic Church in the United States.

Listen to this podcast to learn more about the strange phenomena surrounding the Peshtigo fire.

Previous Newsletter: The Heart of Darkness