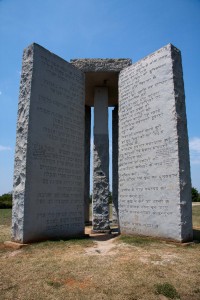 A short message is inscribed at the top of the structure in four ancient languages: Babylonian, Classical Greek, Sanskrit, and Egyptian hieroglyphs. 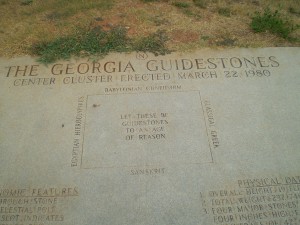 The stones also contain astronomical features. The four outer stones are oriented to mark the limits of the 18.6 year lunar declination cycle. The center column features a hole through which the North Star can be seen regardless of time, as well as a slot that is aligned with the Sun’s solstices and equinoxes. A 7/8″ aperture in the capstone allows a ray of sun to pass through at noon each day, shining a beam on the center stone indicating the day of the year.

The man who commissioned the guidestones, known only by the pseudonym R.C. Christian, is also credited as the author on the explanatory tablet. The sponsors are listed as “A small group of Americans who seek the Age of Reason.”

The tablet also says a time capsule is placed six feet below it, though the dates of placement and when it should be opened are left blank.

Many believe the guidestones were built by representatives of the secret society called the Rosicrucian Order (or Rosicrucians). Others claim they are of a deeply Satanic origin, and that R. C. Christian belongs to a secret Luciferian society involved with the New World Order. They are sometimes called the Ten Commandments of the Antichrist.

I’ve visited these. Elbert County is probably the windiest place on earth!