5 Strange Wonders of the Natural World

The lake with a moving eye, a mysterious forest of crooked trees, and the largest living organism are among the strangest natural wonders of the world.

The natural world is full of beauty, wonder, and weirdness. Some aspects of nature, like seemingly impossible land formations or peculiar flora, are so bizarre that science is still working to explain exactly what they are and how they came to be. Some things are so strange that researchers believe it could only have been man-made…despite a complete lack of evidence to explain its existence either way.

Here are five fascinating examples of just how surreal and mysterious nature’s wonders can be. 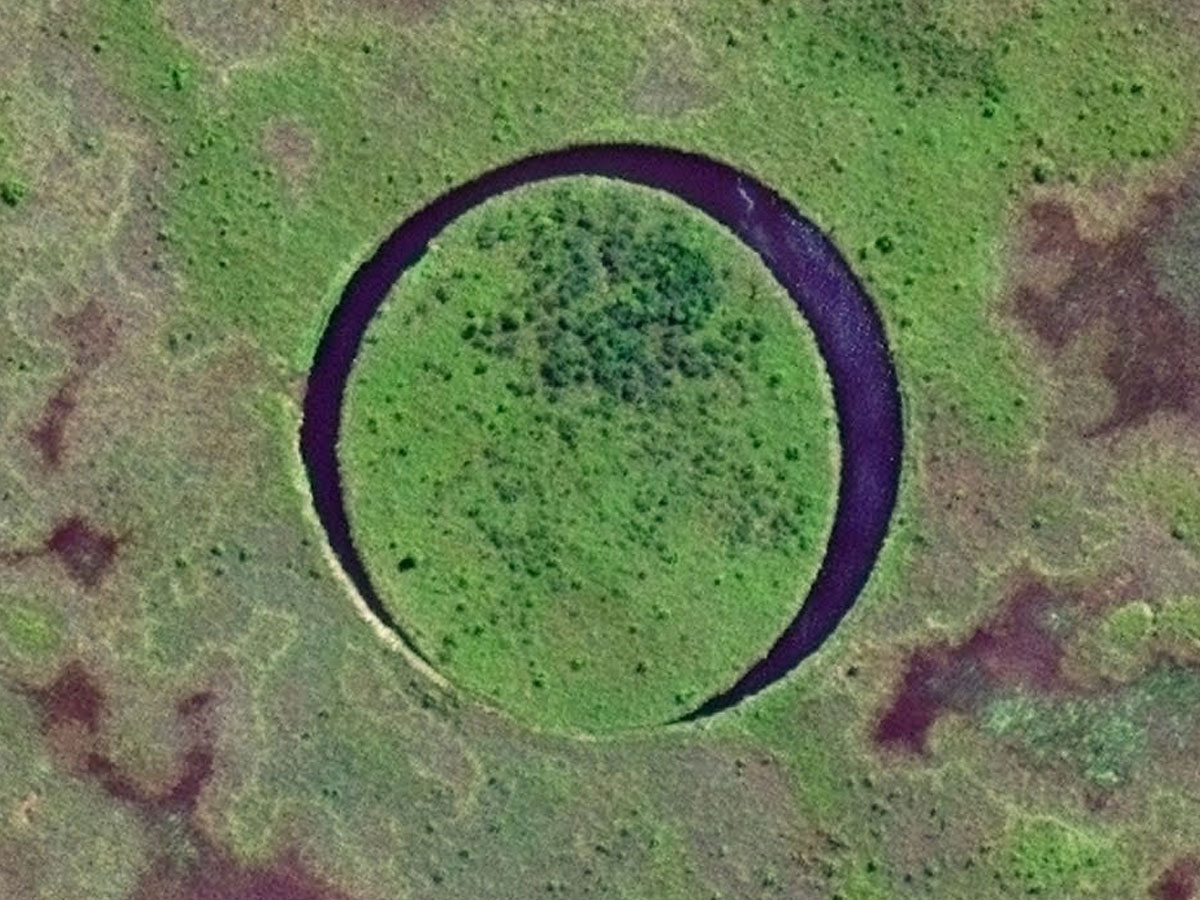 Discovered on Google Maps in recent years, this circular body of water in the marshes of Argentina’s Parana Delta contains an equally round island that nearly fills the space. What’s even more unusual about “The Eye,” as it has come to be known, is the fact that it can be seen in different positions throughout the years of satellite photos taken of the area.

The island seems to be rotating around an axis within the lake.

Some believe “The Eye” could not have occurred naturally, and reports of supernatural phenomena in the area have given rise to the idea that there may be a UFO base hidden beneath the island. 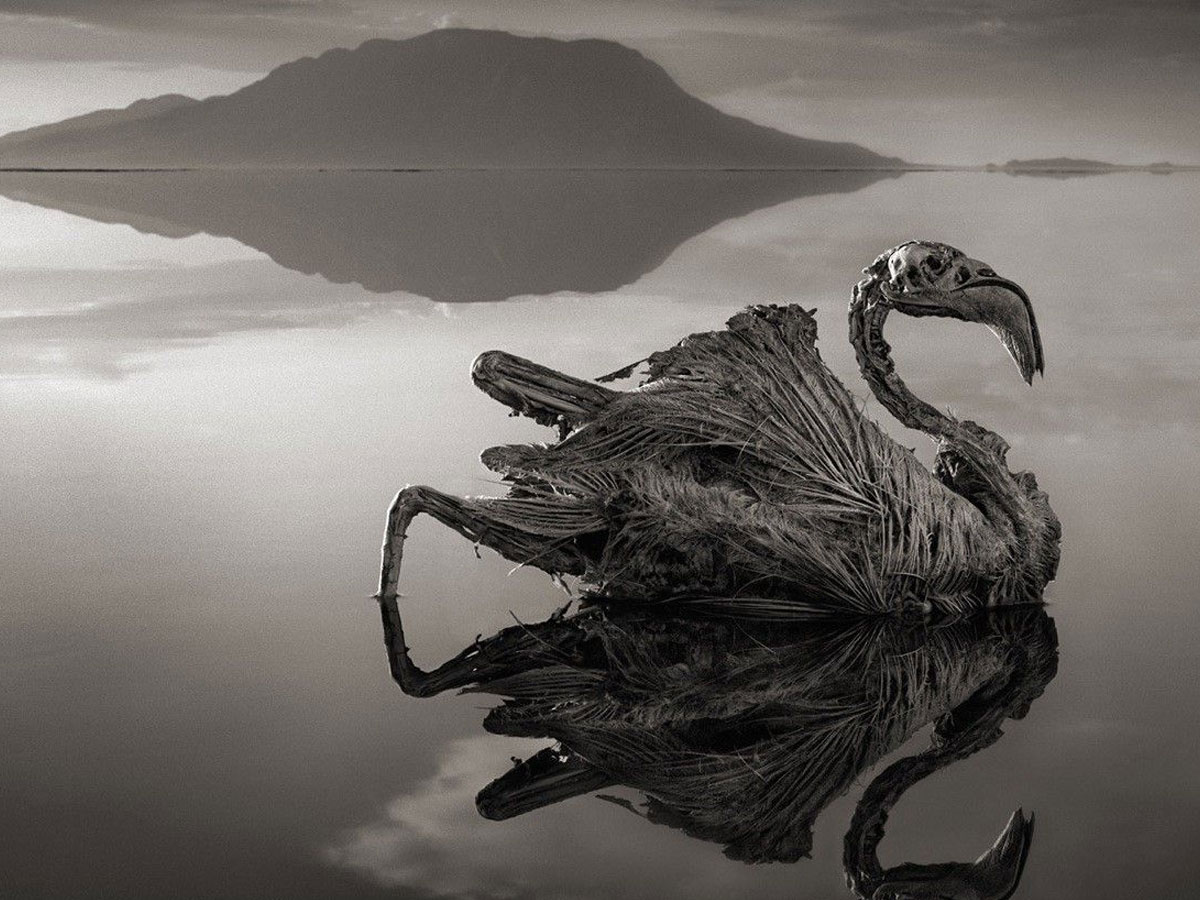 Lake Natron in East Africa is a popular breeding ground for flamingos and, despite it’s caustic waters, is teeming with life. Photographer Nick Brandt’s work, however, showed the world what happens when animals die there: They become thickly encrusted – petrified – by the lake’s high concentration of sodium carbonate from the surrounding hills.

During his time there, Brandt found entire flocks of birds dead in the waters of Lake Natron. He believes the lake’s reflective, glass-like surface confuses birds, causing them to crash into the lake and die in large numbers. 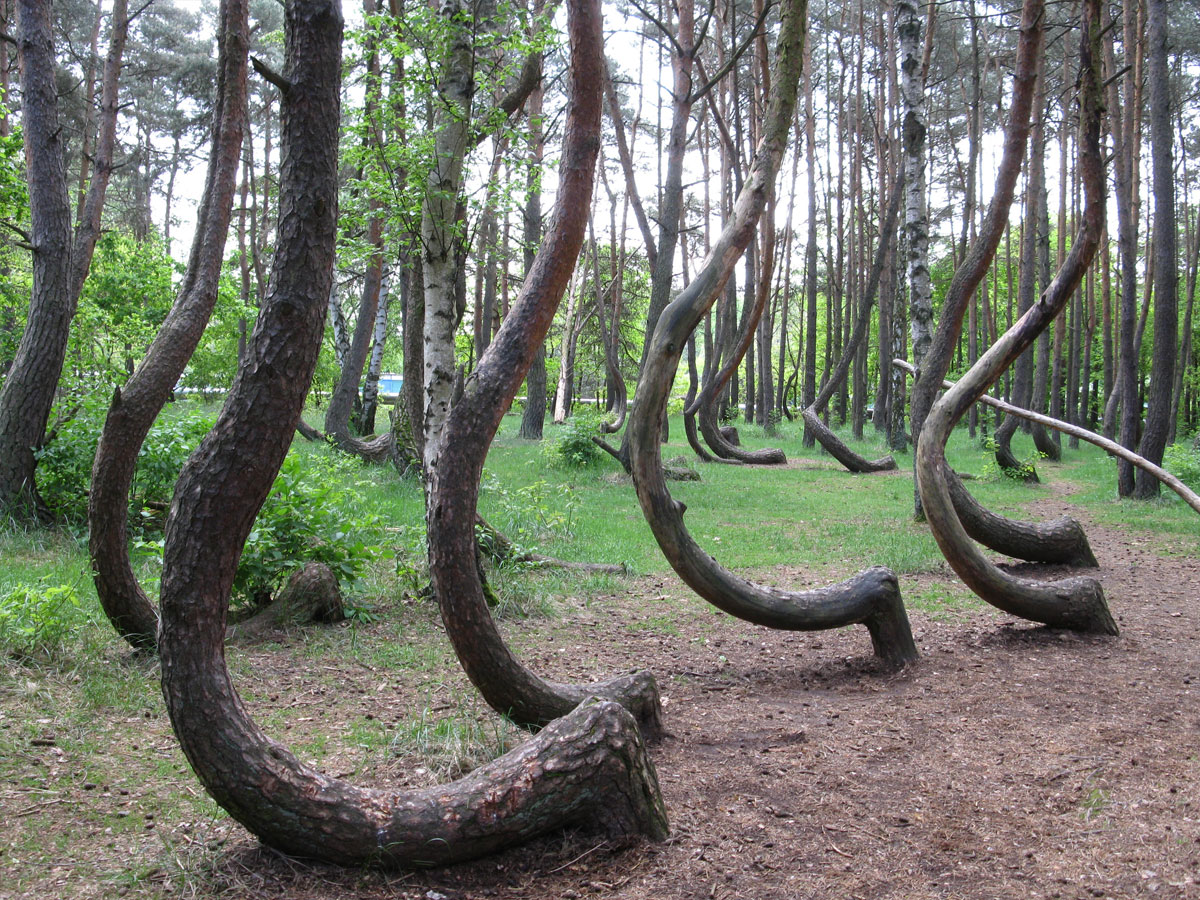 Planted around 1930, this grove of 400 pine trees in West Pomerania have sharp bends that curve to the north. No one knows why. There is speculation that whoever planted them may have used an unknown method to shape them that way as they grew, for use in boat or furniture building. But there is no evidence to support that. Another theory is that extreme winds from a storm bent the trees early in their growth.

The reason for their shape remains a mystery. 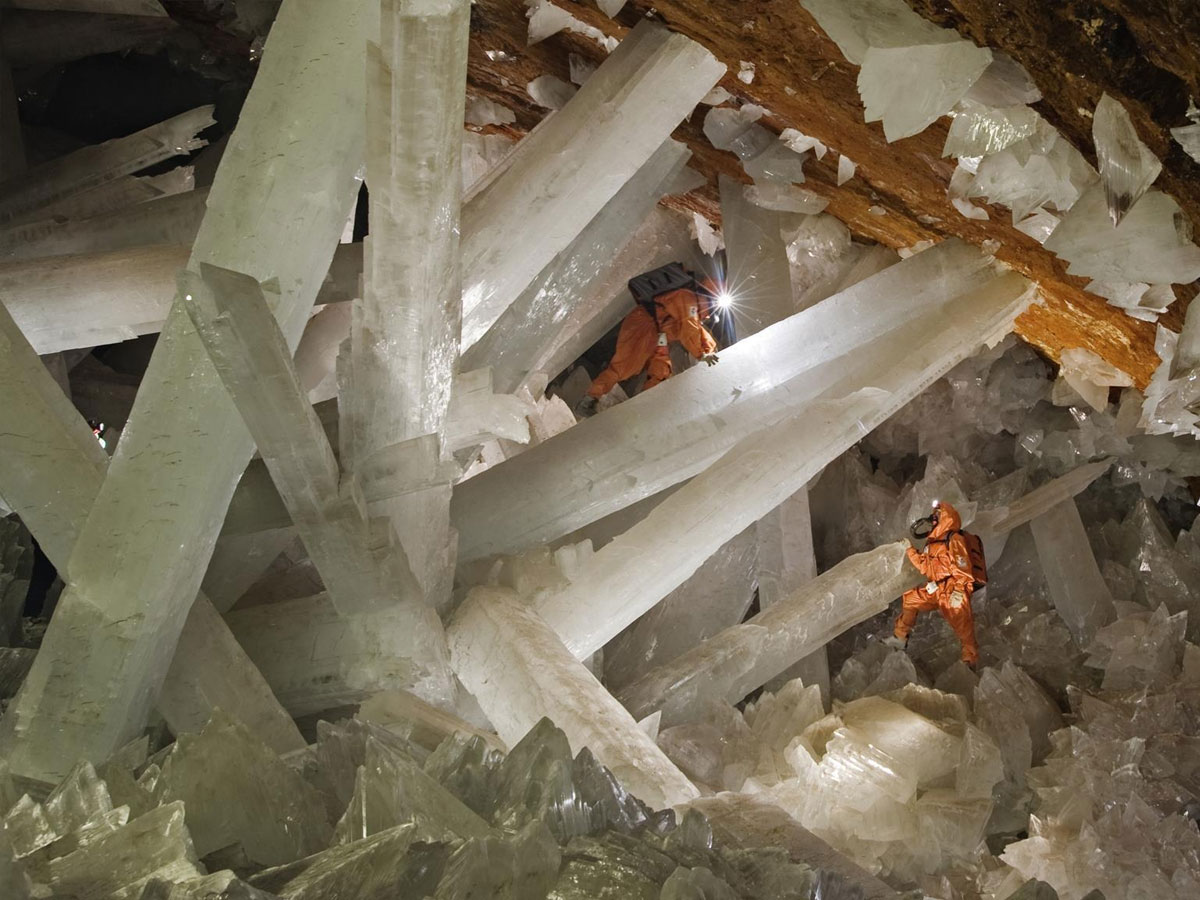 980 feet beneath the surface of the earth in the Naica Mine of Chihuahua, Mexico is the surreal Cave of the Crystals. Discovered in 2000, the underground chamber contains massive selenite crystals that are among the largest in the world.

Naica is positioned above a magma chamber that keeps the cave very hot and humid. This heat, combined with the sulfide-rich water that once filled the space (and does once again since it flooded in 2015)  caused the crystals to grow over a period of more than 500,000 years.

The largest crystal in the chamber is 13 feet in diameter and weighs 55 tons. 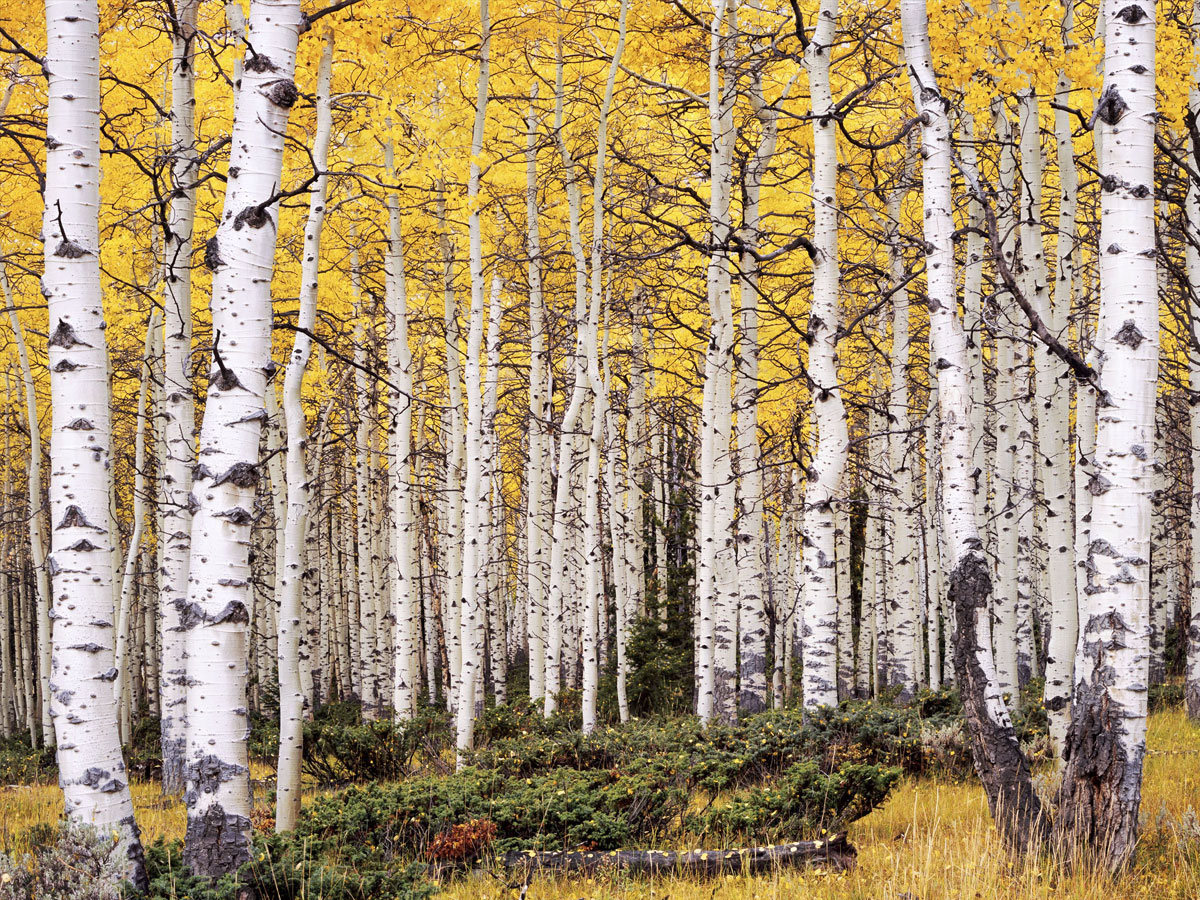 Largest Organism in the World – Utah

Genetic research determined that this 106-acre grove of quaking aspens in Utah’s Fishlake National Forest is a clonal colony of one male aspen believed to share the same root system. That means that every one of these trees is part of a single, massive organism.

And it’s name is Pando.

Comprised of 40,000 trunks, Pando is the largest living organism in the world. At an estimated 80,000 years old (though some researchers believe it may have been around as long as 1 million years), it is also the oldest living organism. And that just might make it the strangest and most fascinating wonder of the natural world.

It is amazing that the “Eye” and the island within it are perfectly round – can nature produce such an even pattern?