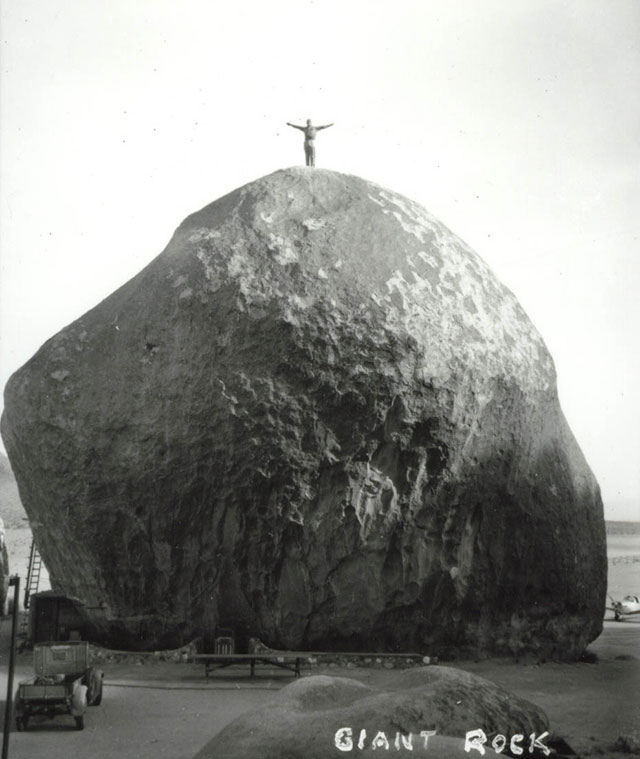 In rooms excavated beneath this massive boulder known as Giant Rock, a man named George Van Tassel claimed to receive the blueprints for eternal life through psychic communications with extraterrestrials.

Located in the Mojave Desert near Landers, California, Giant Rock is a massive, 7 story tall chunk of granite thought to be the largest freestanding boulder in the world. The rock, in the middle of a dry lake bed, was a sacred site to Native Americans, who called it “Great Stone.” Barbara LaGrange writes, “The fabled Giant Rock had attracted the first native nomads hundreds of years before settlements rose from the dusty ground. The granite stone and surrounding ground had been held as holy ground by the Native Americans. It is reported that the Hopi knew of this rock and joined other tribes across the desert to convene and celebrate the coming seasons. Shaman drew spiritual strength for the tribes through this rock. It is also said that the magic in the rock represents the heart of Mother Earth.” 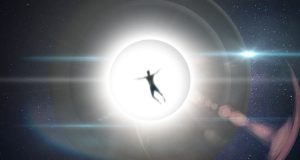 Do you see a lot of UFOs? Do you have a high risk of being abducted by aliens? Then you might need alien abduction insurance.

Years before Van Tassel was communing with aliens there, a German immigrant and prospector named Frank Critzer dug out a home beneath the rock where he lived year round. Possibly due to Critzer’s short-wave radio hobby and the antenna he mounted on top of the rock, he fell under suspicion of being a German spy in 1942. A police raid was mounted on the subterranean home and Critzer was killed when something (it was rumored to be a canister of tear gas) ignited his cache of dynamite used for mining.

Van Tassel, an acquaintance of Critzer’s who had once visited his Giant Rock home, leased the land from the Bureau of Land Management, and moved his family out there in 1947. Van Tassel was a successful flight test engineer for Lockheed International, Douglas Aircraft, and Howard Hughes. He reopened an old airstrip nearby and built a diner for fly-ins. 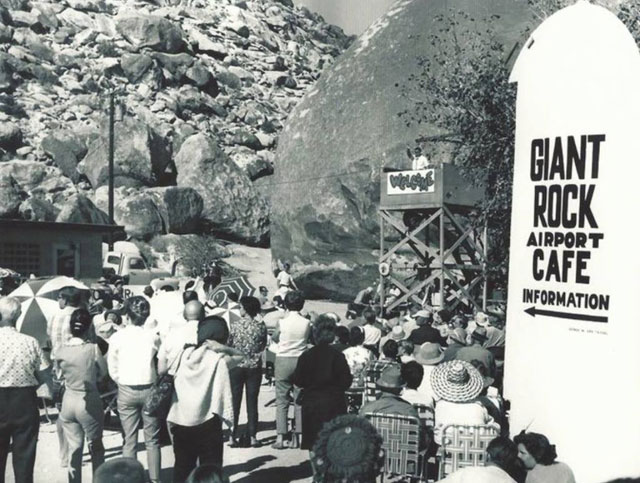 In an article titled George Van Tassel’s Amazing Integratron at Giant Rock, Kathy Doore writes, “Van Tassel believed the rock’s crystalline structure possessed great channeling power by virtue of its piezo-electric characteristics.” In 1953 Van Tassel began to conduct weekly mediations in Critzer’s rooms under the boulder. During one such session he claimed to be awakened by an extraterrestrial from Venus named Solganda who brought him aboard a space ship. There the alien telepathically taught him techniques to extend life. The next year Van Tassel began work on the Integratron, a “time machine for basic research on rejuvenation, anti-gravity, and time travel” that he claimed was a modern version of the Tabernacle of Moses. He said it would “recharge energy into living cell structures, to bring about longer life with youthful energy.”

Van Tassel held the first Interplanetary Spacecraft Convention on March 1, 1954, and thousands of contactees continued to gather at Giant Rock annually for the next 23 years to share their stories of alien encounters while proceeds funded the Integratron. 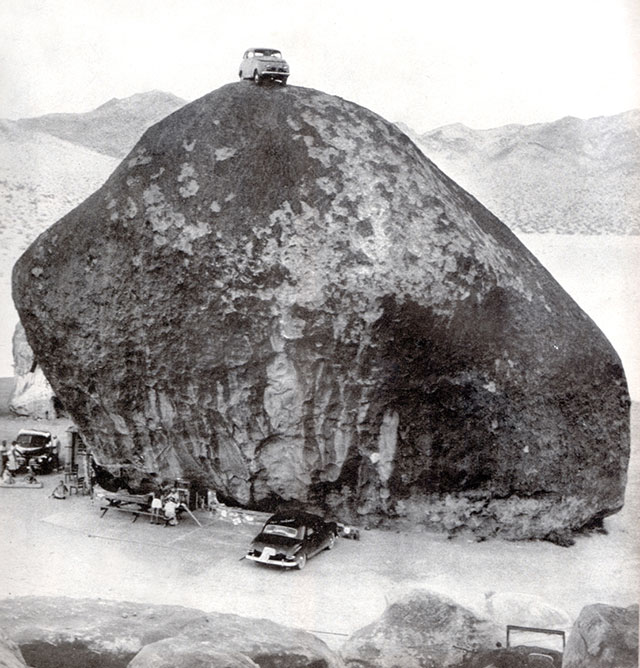