The crystal skull of doom was allegedly discovered by 17-year-old Anna Mitchell-Hedges in 1924 or 1927 while accompanying her adoptive father on an excavation of the ancient Mayan city of Lubaantun in Belize, where Mitchell-Hedges believed he would find the ruins of Atlantis. 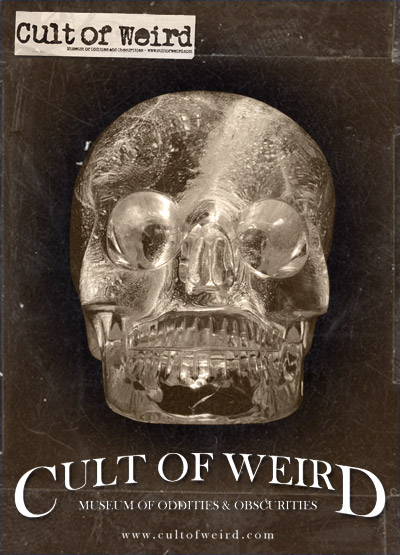 Besides some minor anomalies in the temples and cheekbones, the Mitchell-Hedges crystal skull is an anatomically correct replica of a human skull. The cranium and mandible are believed to have been carved from the same solid block of quartz crystal. A study of the skull by Hewlett-Packard in 1970 revealed it had been carved against the natural axis of the crystal, which typically leads to the crystal shattering even with the most high-tech cutting techniques.

HP also could not find any microscopic scratches on the crystal, leading to the conclusion the skull must have been roughly hewn with diamonds, then meticulously detailed with a gentle solution of silicon sand and water. This process would have taken upwards of 300 years in man-hours to complete.

Though there are some theories relating to the Mayan Long Count calendar prediction of the end of the world December 21st, 2012 and thirteen crystal skulls, as well as the theory that the skull was used in ceremonies to invoke a presence of gods through motion and the channeling of light into the eye sockets, the crystal skull’s purpose and origins remain a mystery.

This has been debunked. It was proven that Anna was never actually where she said she found the skull. The skull itself was most likely carved in Europe in the modern age no more than 20 years before Anna got her hands on it. At best, she was an excellent story teller. At worst, a liar.