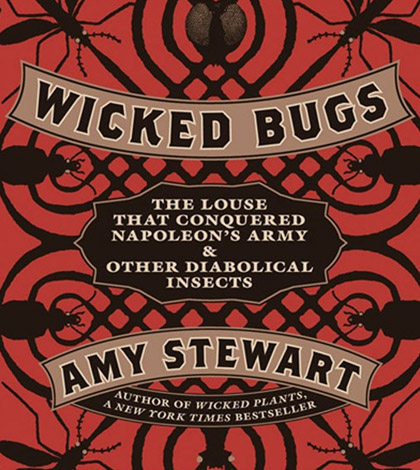 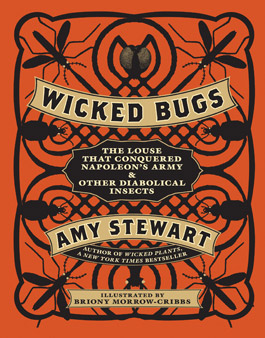 Wicked Bugs: The Louse That Conquered Napoleon’s Army & Other Diabolical Insects by Amy Stewart, author of the New York Times bestseller Wicked Plants, is a darkly comical look at the creepy crawlies that infest, infect, and generally wreak havoc on human affairs.

Some of the strange (and disturbing) facts from Wicked Bugs:

Members of Christopher Columbus’s crew cut off their own toes, so desperate were they to rid themselves of infestations of the CHIGOE FLEA, which burrows under toenails and lays eggs there.

An infestation of typhus-infected BODY LICE helped bring down Napoleon Bonaparte’s army during the failed 1812 campaign against Russia. A century later, during the Russian Civil War, Vladimir Lenin declared, “Either socialism will defeat the louse, or the louse will defeat socialism.”

The Marquis de Sade was arrested and jailed after offering prostitutes candy made with the powdered remains of SPANISH FLY, which he intended as an aphrodisiac. (It’s actually quite toxic.)

Henry Morton Stanley, the man who found David Livingstone in Africa, left an epidemic of TSETSE FLIES infested with sleeping sickness in his wake, wiping out up to two-thirds of the region’s population.

Carole Hargis attempted to murder her husband by slipping a TARANTULA’s venom sac into a blackberry pie.

In his classic horror tale “The Tell-Tale Heart,” Edgar Allan Poe wrote of a murderer listening to the ticking of the DEATH-WATCH BEETLE. According to superstition, the sound signals impending death.

In 1838, British diplomat Charles Stoddard was captured in Uzbekistan and thrown into the bug pit, where he was fed to bloodsucking ASSASSIN BUGS. The insects did not kill him; to accomplish that, he was beheaded in 1842.

Clay bombs filled with PLAGUE-INFESTED FLEAS were developed by the Japanese during World War II. They planned to drop the bombs over California, but the end of the war put a stop to that.

In 1939 the London Zoo killed its BLACK WIDOW SPIDERS, along with other venomous snakes and insects, as a precaution against the possibility of their being liberated during air raids.

The U.S. Department of Defense is developing computer chips that can be implanted in CATERPILLARS in the hopes of controlling their flight paths as butterflies and using the computer chips to transmit data from enemy territory.

One in four people on the planet is infested with ROUNDWORMS, creatures larger than a pencil that live in the small intestine.

BITING MIDGES have been blamed for breaking up marriages in Queensland, Australia, perhaps because swarms of the annoying pests have forced couples to spend more time together indoors. 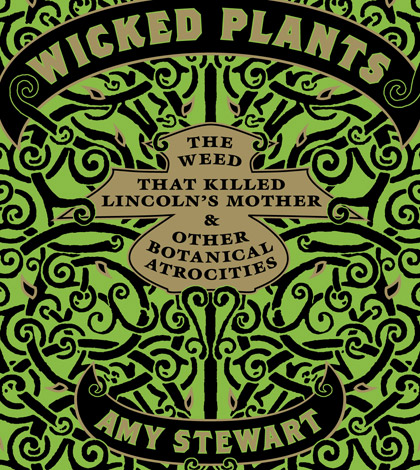