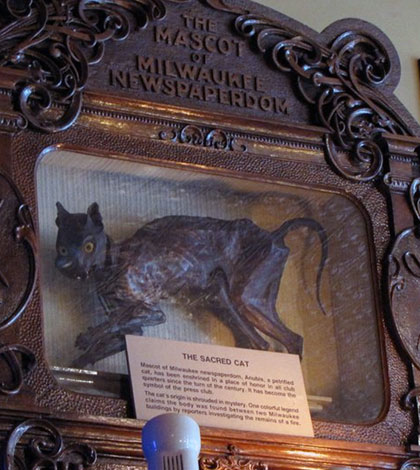 Meet Anubis, the mummified cat that has served as the sacred emblem of Milwaukee news professionals for over a hundred years after it was stolen from the Wisconsin Historical Society in 1897. 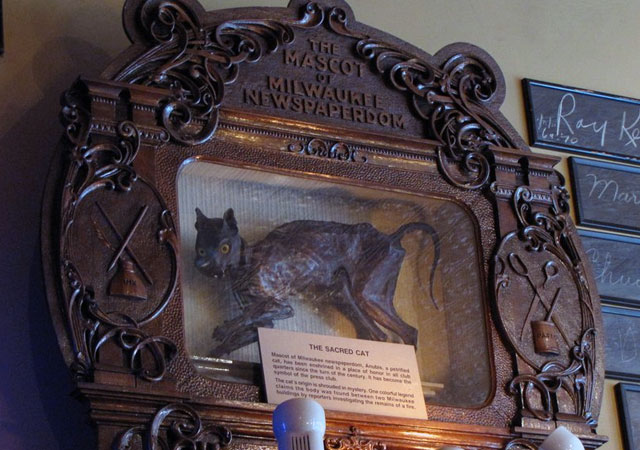 The Milwaukee Press Club was established on November 1st, 1885, and remains the oldest continuously operating press club in North America. It’s 300 members are comprised of journalists and other media professionals, marketers, educators and more. And it’s mascot is a 100-year-old mummified cat, which they keep encased above the bar at their downtown Milwaukee headquarters, the Newsroom Pub.

Owned and operated by the Safe House (and connected by a secret passageway), the historic Newsroom Pub is home to Newsmaker luncheons, social gatherings, and other events throughout the year. The walls are marked by a collection of over 1,300 signatures from visiting dignitaries, celebrities, athletes, and politicians dating back to the 1890s.

And then there is Anubis, the mummified “Sacred Cat” of the Milwaukee Press Club.

Anubis, the Sacred Cat of the Newsroom Pub

The story of how the cat came to be in the possession of the Press Club was not told until 1950, when Tom Brahany, Washington correspondent and former personal secretary to President Woodrow Wilson, finally offered a confession by way of an article in the club’s annual magazine:

Fifty years ago a Cat was stolen. I helped to steal it. In this tardy confession, I am not trying to ease my conscience. I confess only because the story is a good one.

Sometime before the turn of the century, the desiccated remains were found in the town of Darlington and donated to the Wisconsin Historical Society. For some time, it was on display in the State Historical Rooms, which were housed in the Capital building in Madison at the time. It was eventually removed, and found it’s way into the office of chief fish and game warden Dud Fernandez. There, it caught the attention of newsman Charlie Lush, who wanted to borrow it for an upcoming cat show in Milwaukee.

According to Brahany’s account, Fernandez said the cat was property of the state, so it couldn’t be borrowed. But after further pleading, he noted that he wasn’t usually in his office in the evenings. “If the cat disappears after hours and I don’t miss him, and he comes back, nobody could blame me,” Fernandez said. “After all, I’m a fish and game warden, not a cat warden.”

So Lush enlisted the help of Brahany, who was just a student journalist at the time. They took the cat from Fernandez’ office after hours and whisked it away on the night train to Milwaukee. After the cat show, however, it never found it’s way back to the Historical Society. Instead, it became the distinguished emblem of the Press Club. They named it Anubis, cleaned it up, and put it on display.

Over the years Anubis has been glorified by poets, orators and statesmen. The great of the land have come to wonder and worship.

On the musty shelves of the Historical Society it would have been just another forgotten exhibit, but as the Press Club’s Cat it will live forever enshrined in the hearts of scholars and savants.