The Giant Spider Invasion: The Crazy Uncle of Spider Movies

45 years ago, The Giant Spider Invasion hatched upon the world a hoard of monstrous alien arachnids and the greatest low-budget horror film ever made thanks to Wisconsin filmmaker Bill Rebane.

Not only is that the mantra of The Giant Spider Invasion, it’s also the title of the first musical number in the stage adaptation about the making of the film.

45 years have passed since a meteor crashed in rural Wisconsin and opened a gateway to Hell, unleashing monstrous interdimensional spiders upon the small town of Merrill in one of the greatest low-budget horror films ever made.

The Giant Spider Invasion is a masterpiece of campy cinema directed by filmmaker Bill Rebane, and shot around his hometown of Gleason, Wisconsin and nearby Merrill. 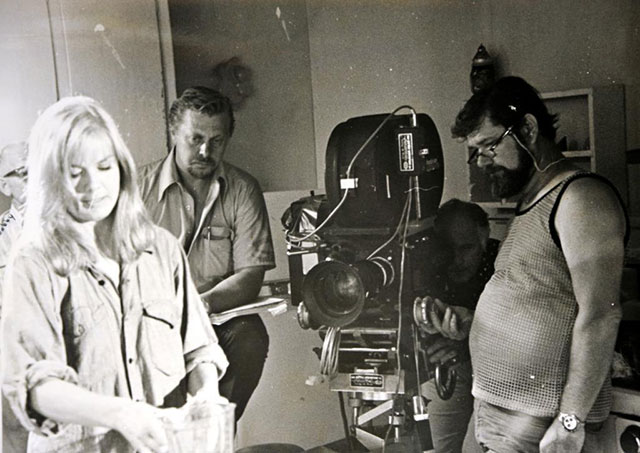 Bill Rebane watches over the should of Leslie Parrish as she blends up a tarantula on the set of The Giant Spider Invasion.

Rebane was a Latvian immigrant who came to the United States in 1952 when he was just 15 years old. He learned English by watching American movies, and soon decided he wanted to make his own.

He started off producing industrial films to pay the bills, but that wasn’t as artistically fulfilling as, say, a creature feature about a small town overrun by spiders. 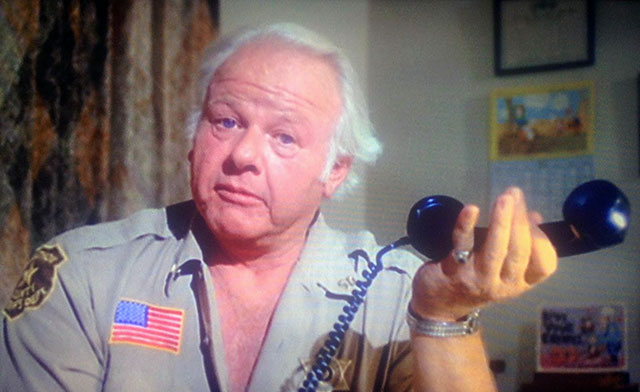 Alan Hale, Jr. as the sheriff in The Giant Spider Invasion

Any respectable B-movie needs at least one washed up, has-been Hollywood actor to legitimize it, and The Giant Spider Invasion doesn’t disappoint.

Alan Hale, Jr., best known for his role as the skipper on Gilligan’s Island, is the sheriff of Merrill. Hale spends most of his screen time sitting behind a desk reading a UFO book and answering the phone. But he does manage to get a signature “little buddy” in during the opening scene.

Another notable name is Barbara Hale (no relation to Alan), who spent nine years as legal secretary Della Street on the series Perry Mason. In Spider, Hale portrays a scientist who arrives in Merrill to investigate “more freaky stuff from Northern Wisconsin” when she detects extraordinarily high radiation levels in the countryside from her nearby observatory.

In the documentary Size Does Matter!, Rebane notes that Hale was particularly crabby about filming in Wisconsin.

But the real star of the film, of course, is the giant spider. 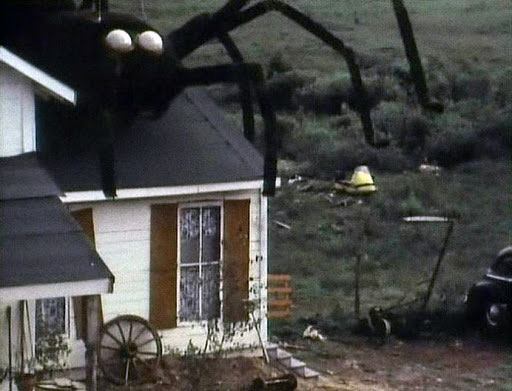 “Did you ever see the movie Jaws?” the sheriff says after getting his first glimpse of the beast. “Well it makes that shark look like a goldfish!”

When Rebane started shopping around the idea of a movie about average-sized tarantulas, he eventually managed to strike a distribution deal…on the condition that he produce a giant 25-foot spider.

Jaws was hitting theaters the same year, so this spider flick was going to need a bigger boat if it was going to compete.

But Rebane didn’t have a giant spider, and there was little left in the budget for special effects. The entire film was made for $300,000, most of which was raised by executive producer Bill Dyke, the former mayor of Madison.

So Rebane had to get creative. He turned to Carl Pfantz, a local welder, to fabricate the titular arachnid.

Pfantz built two giant spiders – one that could be hoisted on top of the house the production constructed for the film, and one that could chase crowds of locals around town. For the latter, Pfantz built a metal frame onto the chassis of a Volkswagen Beetle, which was then covered with fur and moving legs. It required a driver and six kids to operate.

It may not have been the most realistic-looking spider, but it was big and sinister enough to secure the deal. 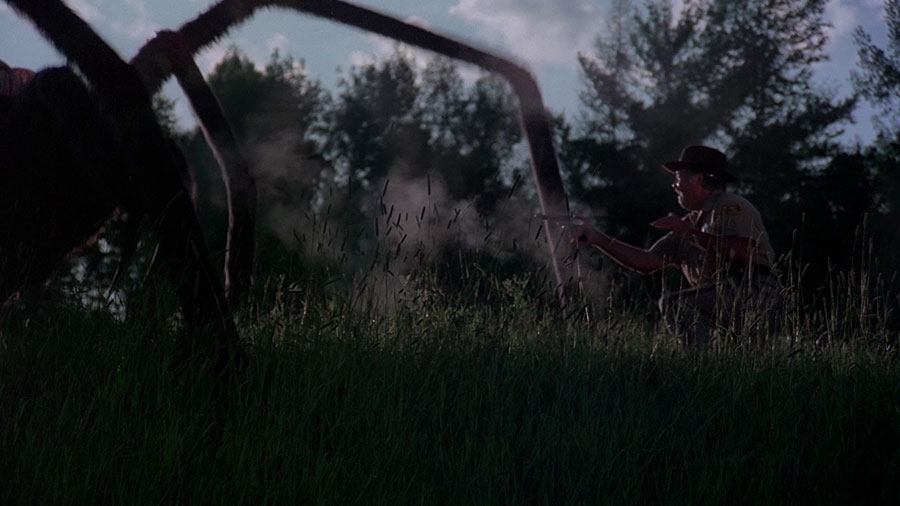 When The Giant Spider Invasion hit theaters, it wasn’t the blockbuster Jaws was, but it still performed surprisingly well at the box office, raking in $15 million worldwide.

And rightly so, as it brought all of our worst fears to life: Spider-spewing black holes, rural Wisconsin, small town revivals, extramarital trailer park affairs, and scantily clad women being eaten by massive cosmic spiders.

As horrific as the movie is, Rebane says he was never a fan of graphic horror movies.

“Edgar Allan Poe is more my style, and the paranormal. The material must be story and character-driven,” he told Estonian World in 2014. “I’m still trying to figure out if I really made ‘horror’ films. For some strange reason, the word ‘horror’ still bugs me. Maybe it’s because I’ve written so much against the violence and graphic horror that comes out of Hollywood.” 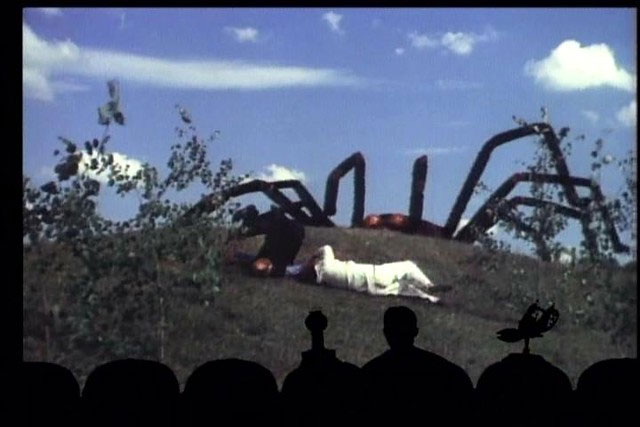 The film found a new audience and gained cult movie status when it was featured in a 1997 episode of Mystery Science Theater 3000.

It made headlines again about a decade later when Rebane tried to sell the frame of the spider on eBay for $25,000. There were no bids.

Then, in 2013, the frame was stolen from a field in Gleason where Rebane stored it.

It was sold at a local scrap yard. 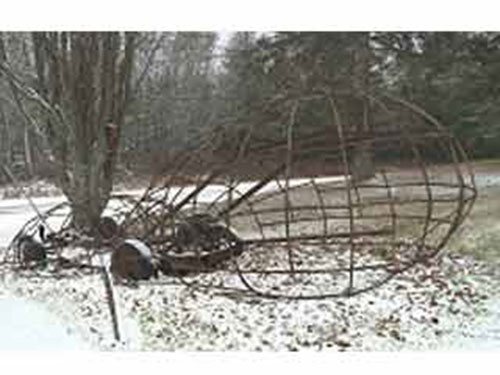 The spider is gone, but the legend of Wisconsin’s giant spider invasion lives on in our hearts.

It may not be the first of its kind, nor the best.

And you certainly can’t call it the grandfather of the genre.

If you had to fit it somewhere in the family tree of 8-legged cinema, it’s probably the crazy uncle of spider movies.

The crazy uncle that smokes you up, shows you his box of Playboys, and then passes out in his own feces.

And for that, Giant Spider Invasion, we love you. 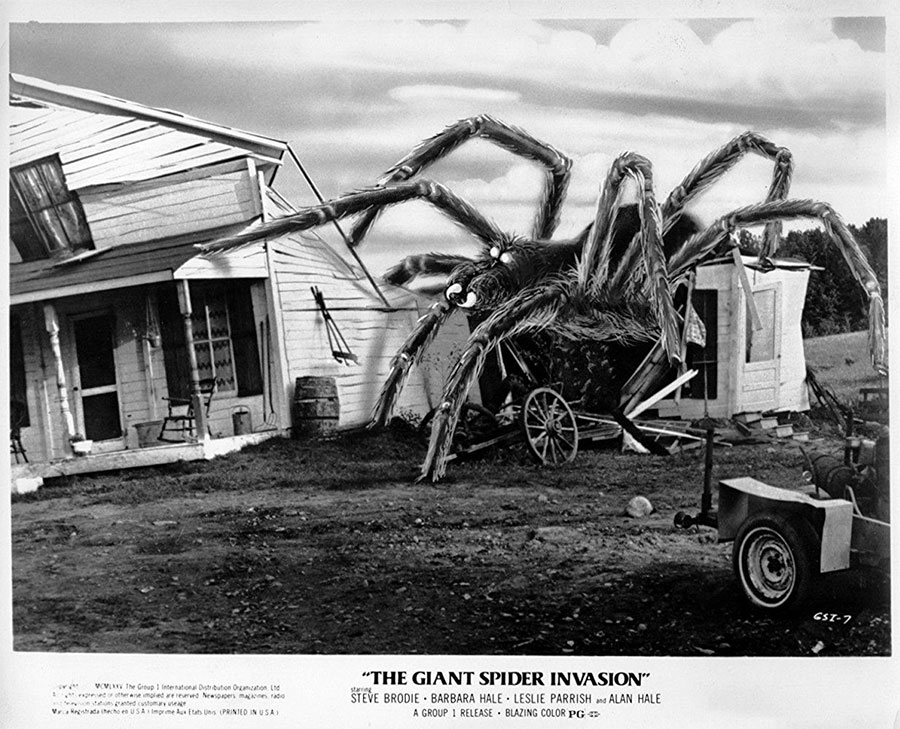