A collection of historical accounts of cannibalism within tribes of the Congo and South Pacific Islands by early missionaries.

CANNIBALISM IN THE FIJI ISLANDS 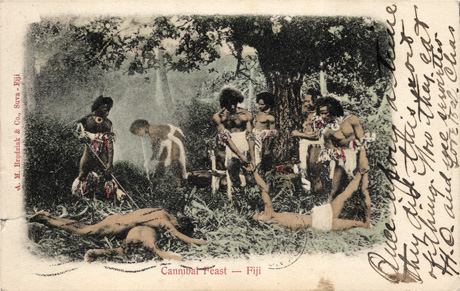 “October 31st, 1839, Thursday. This morning we witnessed a shocking spectacle. Twenty (20) dead bodies of men, women and children were brought to Rewa as a present from Tanoa. They were distributed among the people to be cooked and eaten. They were dragged about in the water and on the beach. The children amused themselves by sporting with and mutilating the body of a little girl. A crowd of men and women maltreated the body of a grey-haired old man and that of a young woman. Human entrails were floating down the river in front of the mission premises. Mutilated limbs, heads, and trunks of the bodies of human beings have been floating about, and scenes of disgust and horror have been presented to our view in every direction. How true it is that the dark places of the earth are full of the habitations of cruelty.”

“November 1st, Friday. This morning a little after break of day I was surprised to hear voices of several persons who were talking very loudly near the front fence of the mission premises. On going out to ascertain the cause of the noise, I found a human head in our garden. This was the head of the old man whose body had been abused on the beach. The arm of the body had been broken by a bullet which passed through the bone near to the shoulder, and upper part of the skull had been knocked off with a club. The head had been thrown into our garden during the night, with the intention no doubt, of annoying us and shocking our feelings.”

“These poor victims of war were brought from Verata, and were killed and brought away by victors to be roasted and eaten. Many women and children were taken alive to be kept for slaves. About 30 living children were hoisted up to the mastheads as flags of triumph. The motion of the canoes while sailing soon killed the helpless creatures and silenced their piercing cries. Other children were taken, alive, to Bau that the boys there might learn the art of Feegeean warfare by firing arrows at them and beating them with clubs. For days they have been tearing and devouring like wolves and hyenas.”
– Rev. David Cargill, Methodist Missionary, Rewa, Fiji, 1839

“One of the servants of the king a few months ago ran away. She was soon, however, brought back to the king’s house. There, at the request of the queen, her arm was cut off below the elbow and cooked for the king, who ate it in her presence, and then ordered that her body be burnt in different parts. The girl, now a woman, is still living.

“Two men that were taken alive in the war at Viwa were removed from thence to Kamba, to be killed. The Bau chief told his brother – who had been converted to our mission – the manner in which he intended them to be killed. His brother said to him: “That will be very cruel. If you will allow the men to live, I will give you a canoe.” The Bau chief answered: “Keep your canoe. I want to eat men.” His brother then left the village that he might not witness the horrible sight.

“The cruel deed was then perpetrated. The men doomed to death were made to dig a hole in the earth for the purpose of making a native oven, and were then required to cut firewood to roast their own bodies. They were then directed to go and wash, and afterwards to make a cup of a banana-leaf. This, from opening a vein in each man, was soon filled with blood. This blood was then drunk, in the presence of the sufferers, by the Kamba people.

“Sern, the Bau chief, then had their arms and legs cut off, cooked and eaten, some of the flesh being presented to them. He then ordered a fish-hook to be put into their tongues, which were then drawn out as far as possible before being cut off. These were roasted and eaten, to the taunts of “We are eating your tongues!” As life in the victims was still not extinct, an incision was made in the side of each man, and his bowels taken out. This soon terminated their sufferings in this world.”
– Jaggar, Methodist Missionary, Fiji, 1844 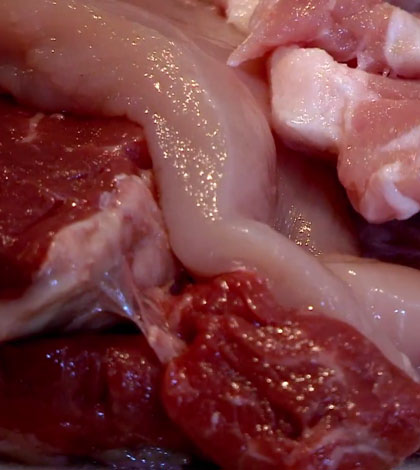