Fall is a few months away yet, but I’m starting to feel the Halloween spirit after a visit to the Midwest Haunters Convention this past weekend. This haunt industry convention usually takes place in Chicago, but we were fortunate to have it much closer to home this year in Milwaukee. And with Distortions Unlimited (of the Travel Channel series Making Monsters) on the vendor list, I knew I couldn’t miss it.

The alternative was a weekend camping in a tent in the Kettle Moraine while it downpoured, so I think I made the right call. 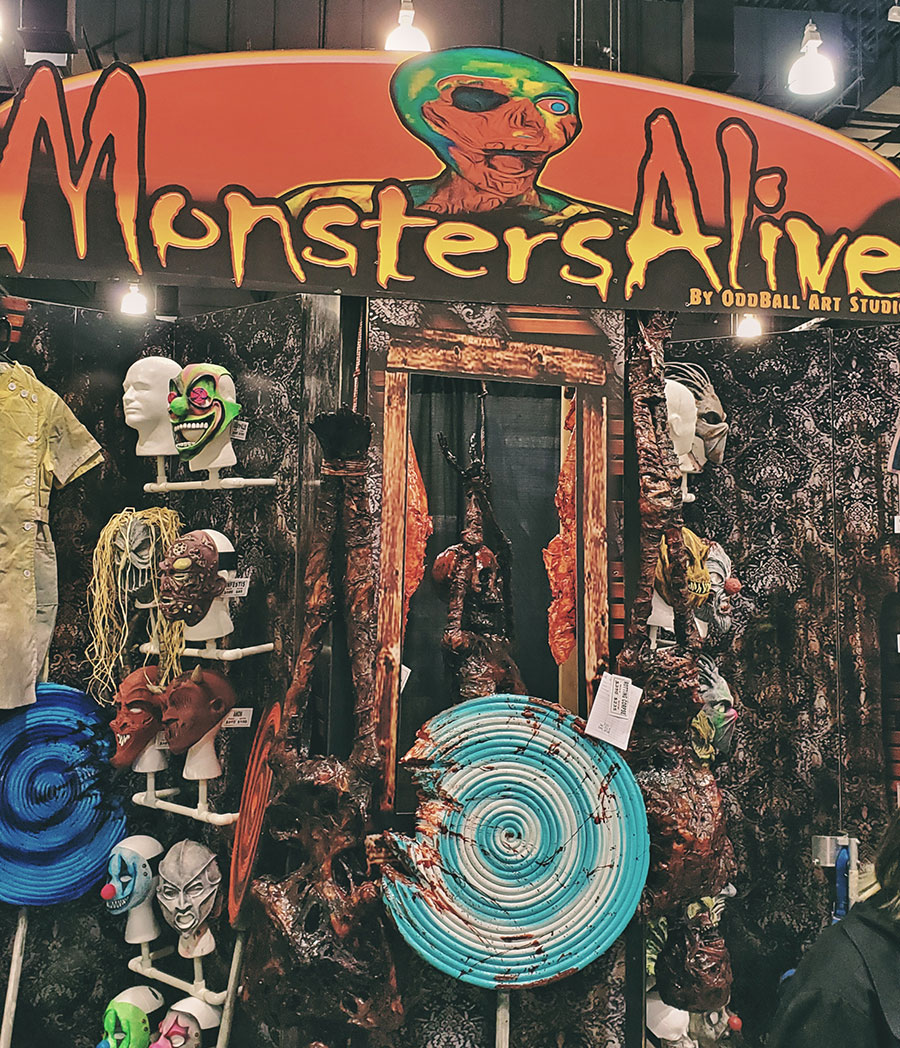 There was plenty of blood and gore at the convention, of course. Some great costumes, dark art, and a creepy little sideshow haunt created by the masterminds at Wisconsin Feargrounds.

But here’s the thing: I go to events like these with the intention of creating a masterpiece of photojournalism, but once there I’m too paranoid about upsetting people to take any good photos. Maybe it’s residual trauma from that time I was scolded for taking photos at a Halloween Express because “if customers were allowed to take pictures, they wouldn’t buy anything.”

Rest assured that there were a lot of amazing, disturbing and macabre things to see at the Midwest Haunters Convention, and I failed to photograph most of them. Like the vendor with the photo op where I could have put my head in the hole to pose as a busty, eviscerated torso.

But I did get a few shots to share on Wisconsin Frights social media that I think you need to see. 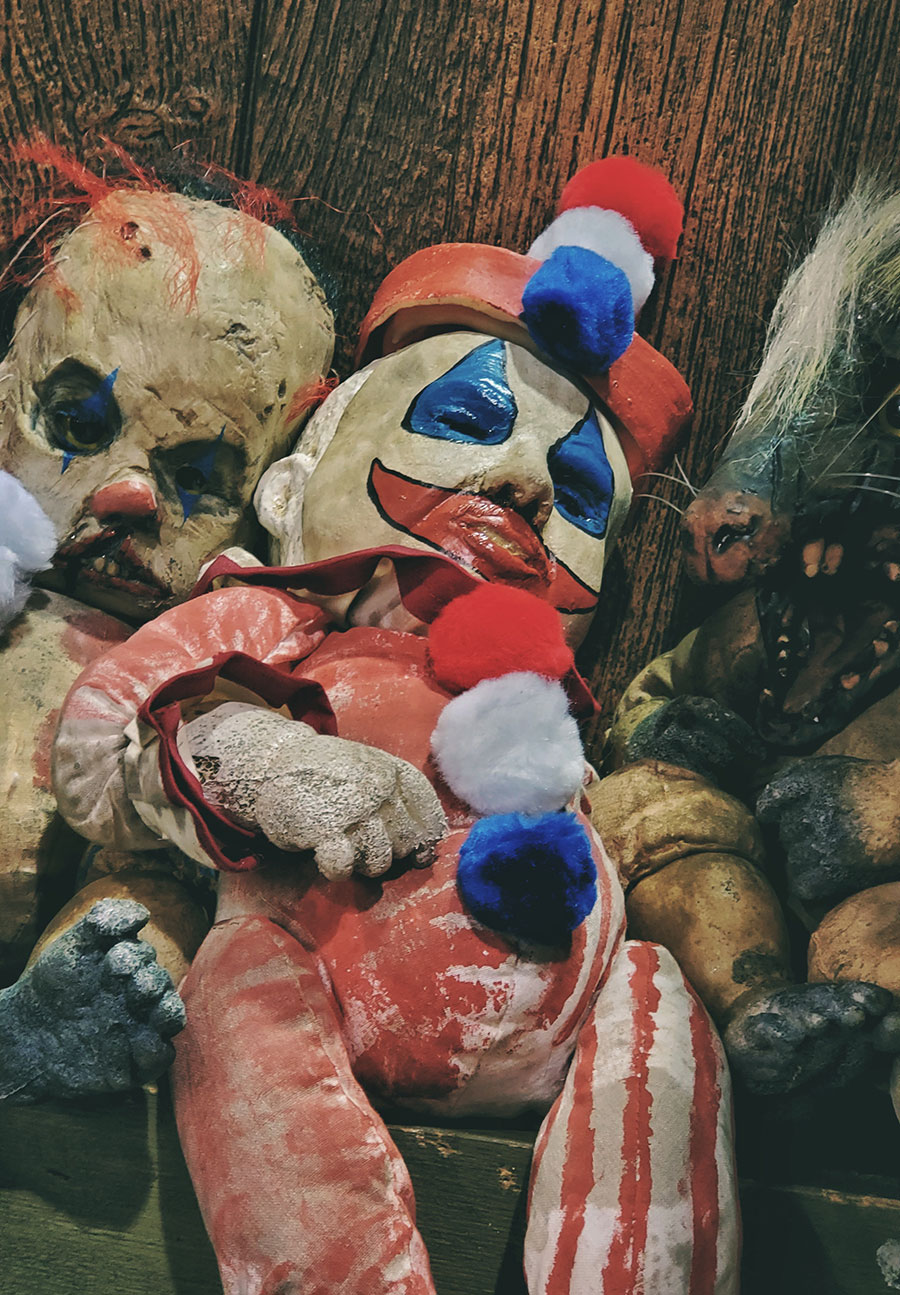 This creepy doll of serial killer John Wayne Gacy’s alter ego Pogo the Clown really wants to live on my shelf. This is one of the many disturbing creations that were on display at the Pumpkin Pulp booth. 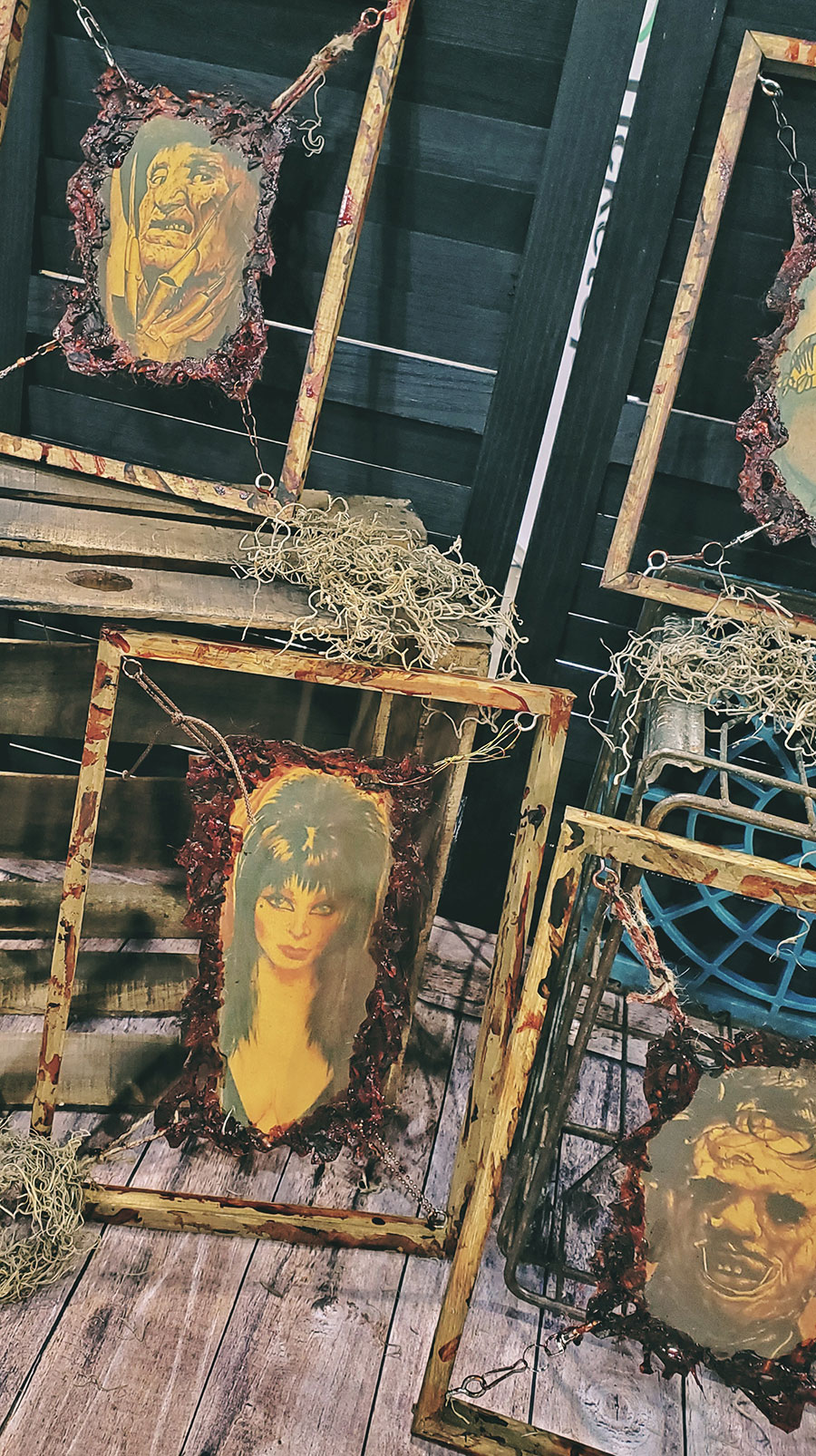 This company called Inkfection Collection prints tattoos onto leather and turns it into a gory work of skin art.

I bought one featuring a Beetlejuice version of the Haunted Mansion’s famous tightrope girl painting in the Stretching Room, this one depicting Lydia Deetz walking the tightrope over a sandworm. 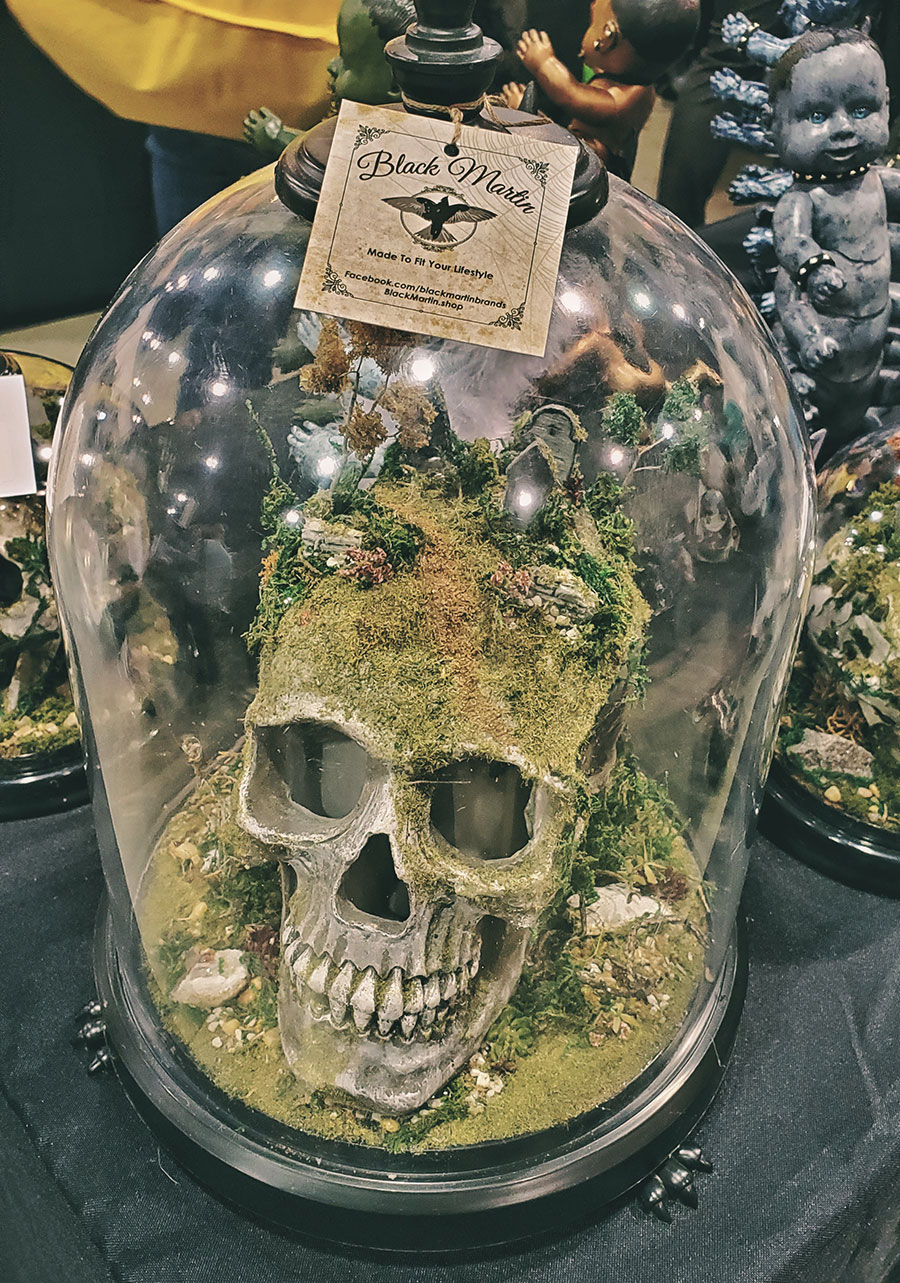 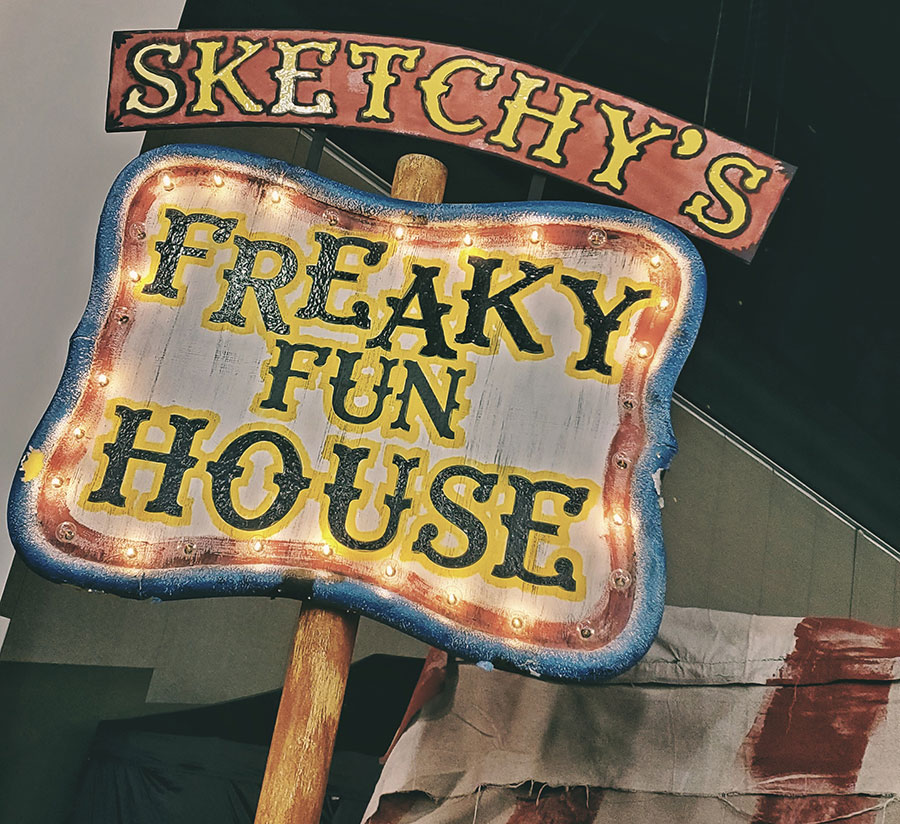 This creepy little haunt was created by Wisconsin Feargrounds, one of the biggest and best haunts in the state. Lurking inside this terrifying big top were horrific interpretations of freak show performers from the heyday of the circus sideshow, including a man-eating chicken, a bearded bride, and a large, hairy Spidora.

I can’t wait for the haunt season. 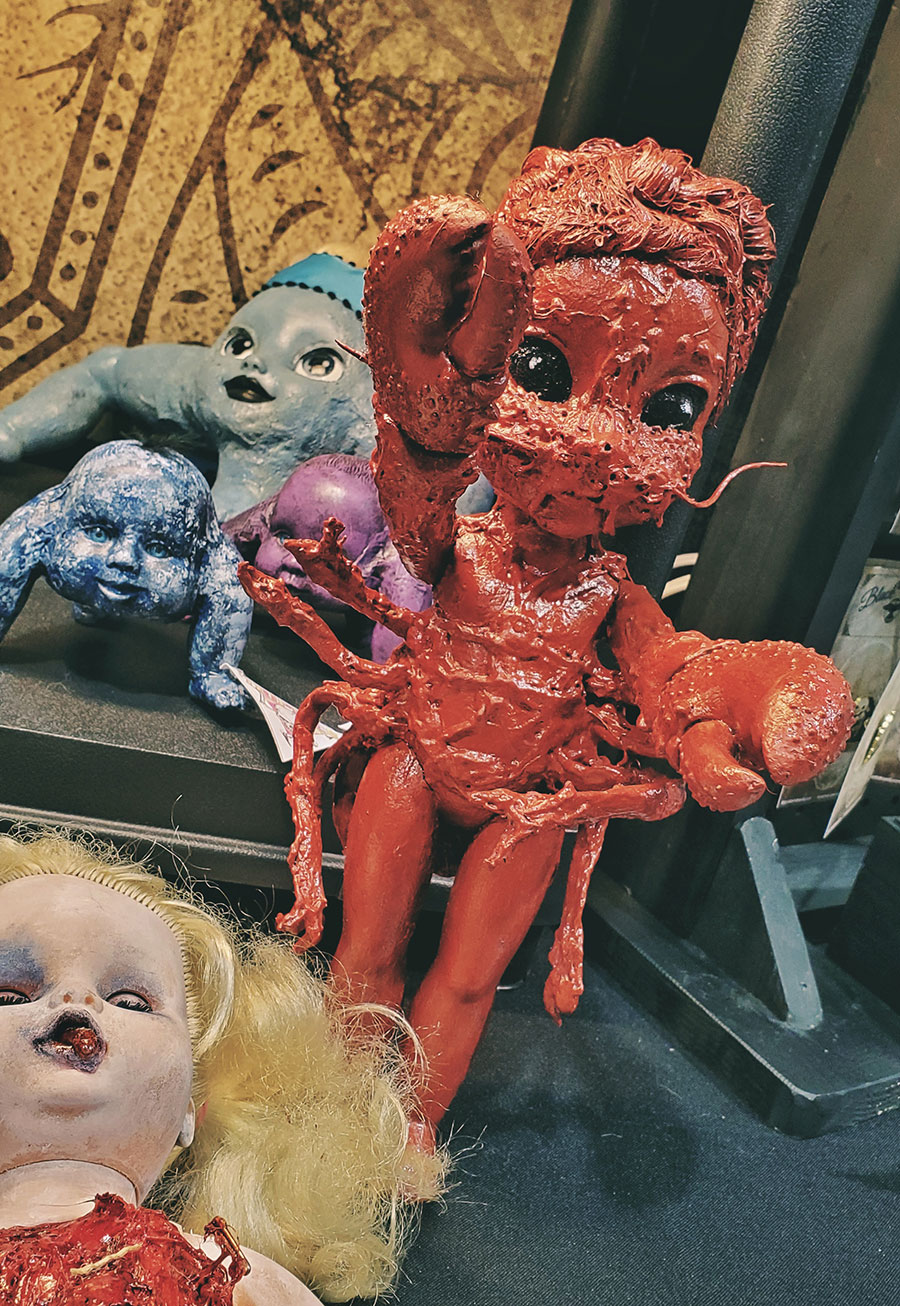 This lobster girl is one of many creepy creations by Amy’s Abominations. 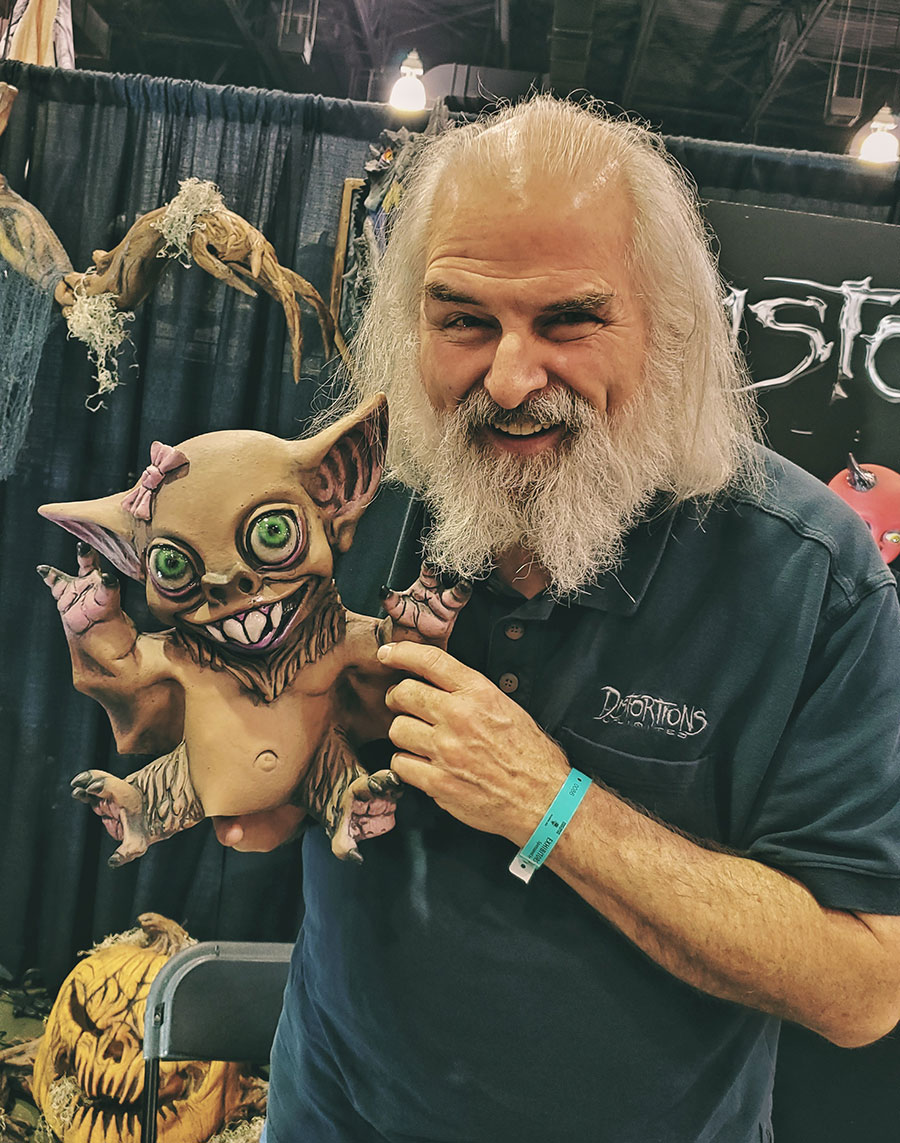 Finally, on my way out the door I decided I could not leave without buying one of the tiny demented critters on display at the Distortions booth. Especially since it meant I got to meet Ed and Marsha.

When you get the opportunity to meet Ed Edmunds, you buy a monster from him. Even if it’s a cute little vampire bat with a bow because that’s all he has left.