The skull of notorious cannibal Alexander Pearce has been in the collection of a Pennsylvania museum for many years, and Tasmania wants it returned home. 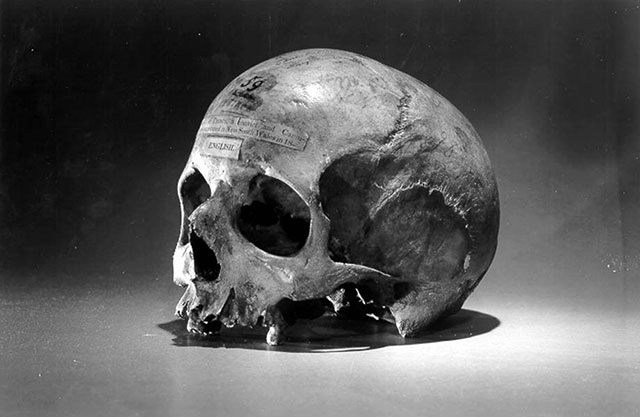 Alexander Pearce was hanged in the town of Hobart, Tasmania in 1824 for murder and cannibalism. The surgeon who performed the subsequent dissection sold Pearce’s skull to American physician and natural scientist Samuel George Morton. Dr. Morton’s studies in craniometry lead to his belief that skull size was directly related to intellectual capacity. He believed each race was created individually and that Caucasians, who had the largest skulls, were the most intelligent.

Morton was one of the founders of the Pennsylvania Medical College in Philadelphia, where he served as a professor of anatomy until 1843. Though recent examinations of his work seem to indicate his measurements were inaccurate and his data skewed by racial bias, Morton’s impressive collection of crania is still studied today.

He spent years obtaining skulls through correspondence with his many connections around the world, amassing 867 meticulously labelled and catalogued skulls that became known as “the American Golgotha” in scientific circles because it was the largest of its kind. This collection, including the skull of Alexander Pearce, is now in the hands of the University of Pennsylvania Museum of Archaeology and Anthropology. 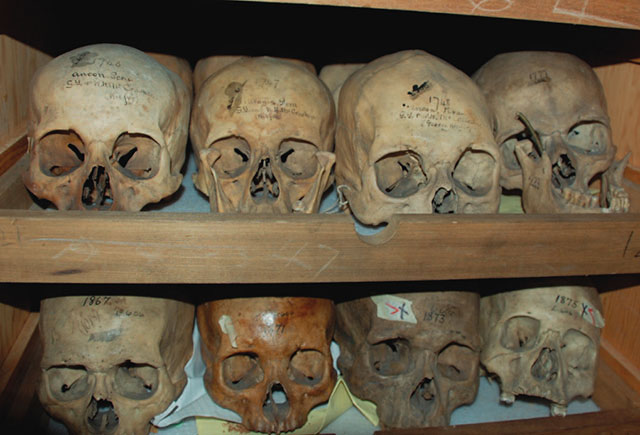 Pearce, an Irish farmer, was sentenced to Van Diemen’s Land, now Tasmania, in 1819 for the theft of six pairs of shoes. He escaped in 1822, but was eventually caught. He received a longer sentence, and was moved to Macquarie Harbour Penal Station, a place with a reputation as one of the harshest penal settlements in Australia.

Not long after, he led an escape with seven other convicts along the rough and untamed West Coast. Starvation began to take hold after 15 days in the wilderness, so the men drew straws to see who would become their next meal. When the unlucky bearer of the short straw was killed, three men fled the group. The remaining four battled it out to see who would outlast the others, but it was Pearce who landed the final axe blow.

Pearce was caught after 113 days on the run and locked up in Hobart. He confessed the fate of his fellow escapees to Rev. Robert Knopwood, but Knopwood didn’t believe it. He thought the others were still out there in the bush and Pearce was just covering for them. Pearce was sent back to Macquarie Harbour where he escaped again less than a year later, this time with a young convict named Thomas Cox. He was caught alone 10 days later with pieces of human flesh in his pockets. Though he carried with him a good supply of food, it seems he didn’t wait long before dispatching and consuming his unsuspecting victim.

There was no question of his guilt this time. Pearce was sentenced to death and hanged in Hobart on July 19, 1824. Just before his death, he reportedly said, “Man’s flesh is delicious. It tastes far better than fish or pork.”

Pearce’s exploits are ingrained in Tasmanian folklore and hold a certain ghastly allure for visitors to the area. Now, after nearly 200 years, the people of Tasmania’s West Coast would like to see the skull of their notorious cannibal killer returned home where it belongs.

The Morton Collection of Human Skulls at the Penn Museum

Wasn’t he only there for punishment? So why do they think he ‘belongs there’?
If Ireland would say this… But Tasmania? Very funny.
But I’ll better be quite, not wanting them angry, in the end they will come and swallow me, haha!